Razer's latest flagship gaming notebook is its most polished yet.

Razer's revamped Blade stands out in a sea of great gaming laptops. It's not the lightest, and it doesn't have the most powerful graphics hardware, but it's one of the most polished notebooks we've seen this year. Razer has always positioned its Blade machines as MacBook alternatives, and this latest model is the closest you'll get to a gaming-focused MacBook Pro. And just like Apple's machines, you can expect to pay a premium.

The Blade wouldn't be a Razer without its jet-black, unibody aluminum case. It's the rare gaming laptop that looks pretty understated, save for the large green logo on the lid. There's zero flex or any weakness. Razer also coated the case in an anodized finish, which feels smooth and helps prevent scratches.

The biggest upgrade here is the display: The Blade now features a 15.6-inch screen, compared to the 14-inch panel on last year's model. Its screen bezels are much thinner as well. Overall, there's 20 percent more screen space in a frame not much larger than before. It's only been a year but the swaths of empty space around the old model's display already looks pretty dated. 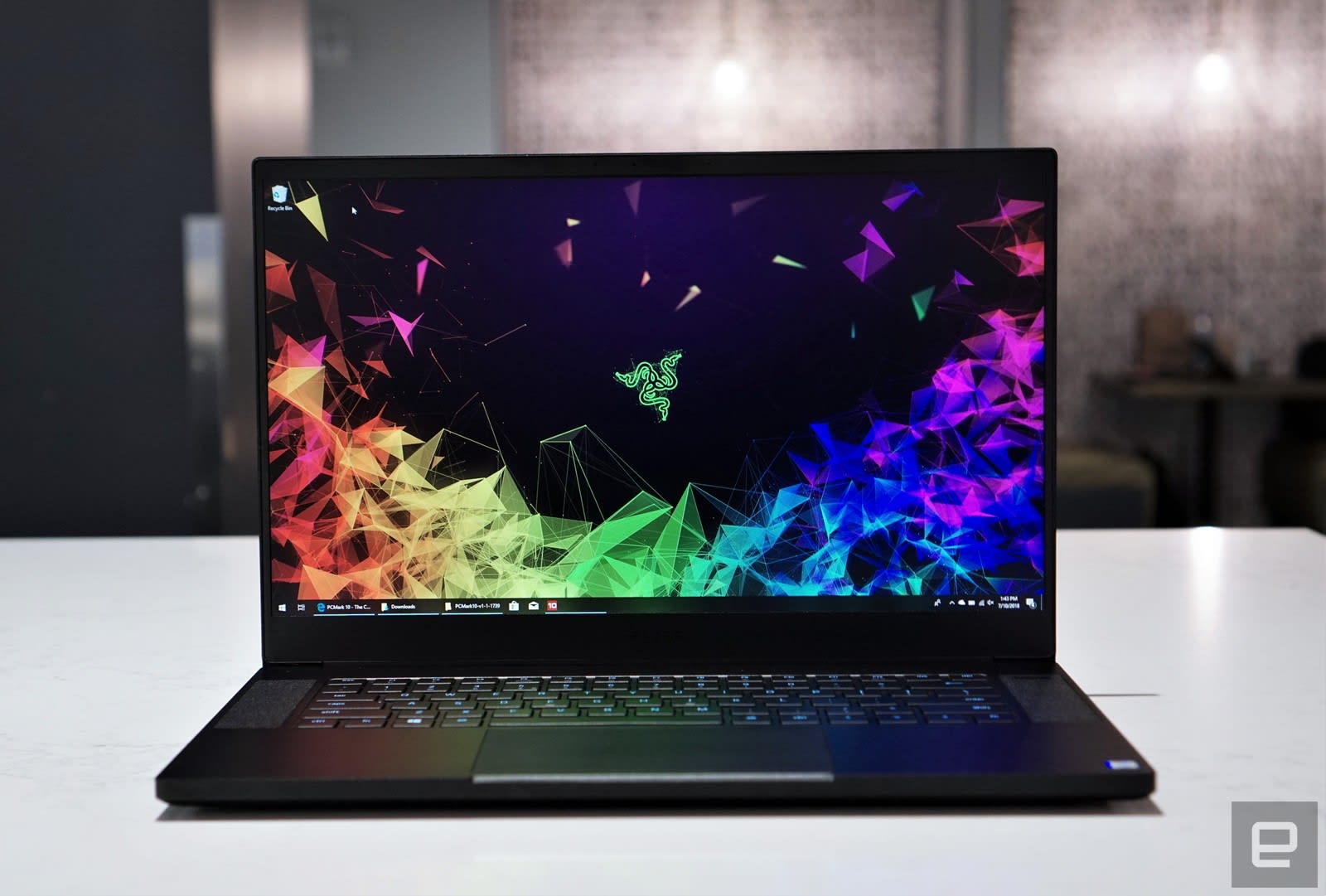 While the side bezels are only 4.9 millimeters, Razer left a bit more room up top for the 720p webcam. That might irk people looking for edge-less screens, but it's better than placing the webcam below the display, like Gigabyte's Aero 15X or Dell's previous XPS machines. Nobody wants a camera pointed at their nostrils.

You can opt for 1080p 60Hz or 144Hz displays, or go all the way up to a 4K touchscreen. Razer says it's color calibrating every display at the factory, and they also support 100% of the SRGB color profile. Now that it's toting a larger screen, the new Blade is also slightly heavier than before, clocking in at 4.5 pounds for the 1080p model and 4.7 pounds for the 4K.

That's about the same weight range as other modern gaming laptops, though not as impressive as the 4.2-pound MSI GS65 Stealth Thin. Still, it's well below what powerful gaming laptops weighed even last year. And since it's around 17mm thin, the Razer Blade fits into most 15-inch laptop bags, something gaming machines often had trouble with. 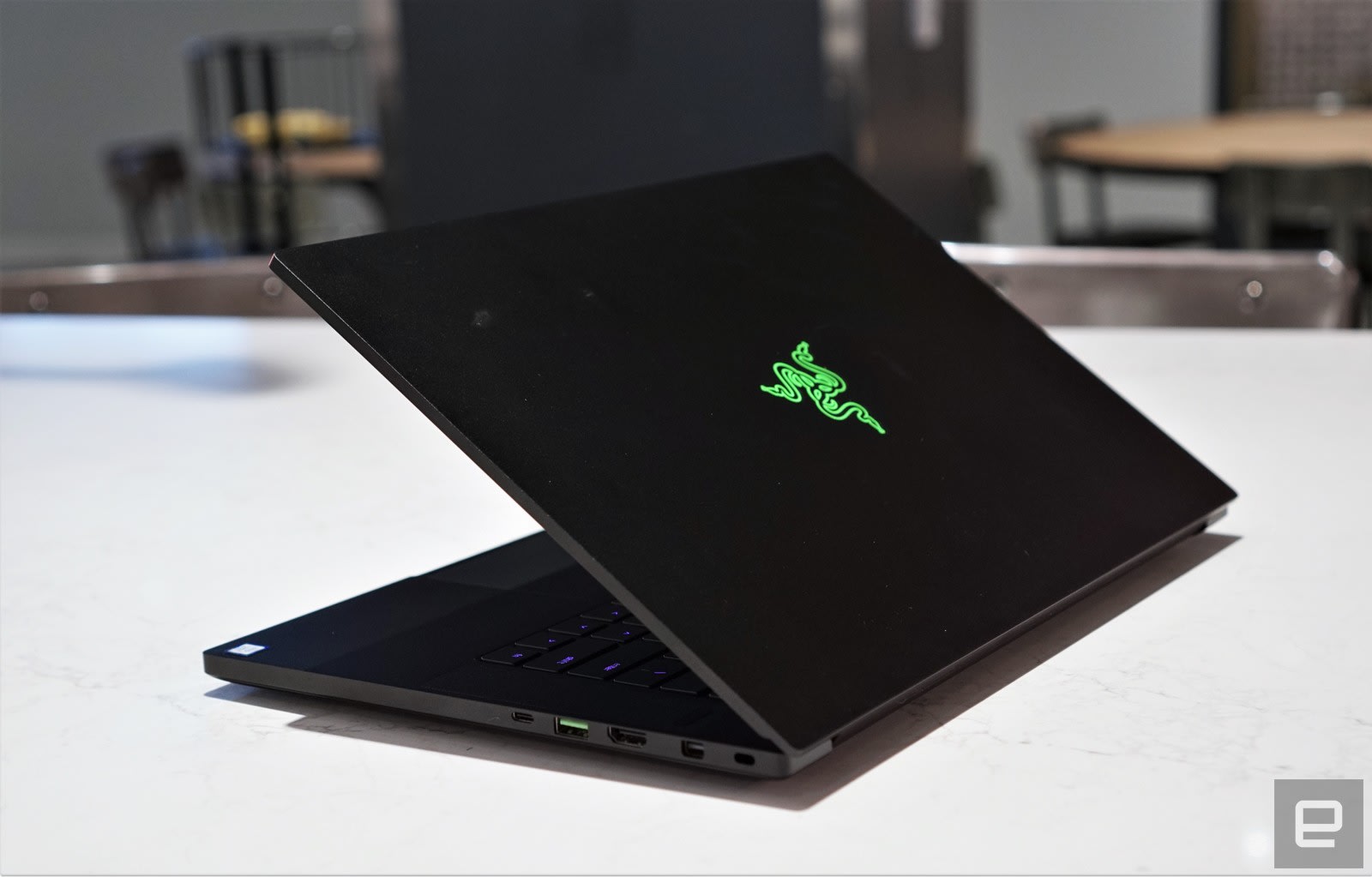 Under the hood is a six core Intel i7 CPU, and either NVIDIA's GeForce GTX 1060 Max-Q graphics processor with 6GB of memory, or the GTX 1070 Max-Q with 8GB. Both should handle modern games in 1080p at 60 frames per second without a problem. But you'll definitely want the faster GPU to take full advantage of the Blade's 144Hz display. You'll need that extra power to see speeds closer to the 144FPS best suited to that high refresh rate.

As for ports, it includes three traditional USB 3 connections, a single USB-C Thunderbolt 3 port, HDMI and a mini-display port. Razer uses a custom power connection for its AC adapter, which is notably light, unlike the large bricks some gaming laptops use. 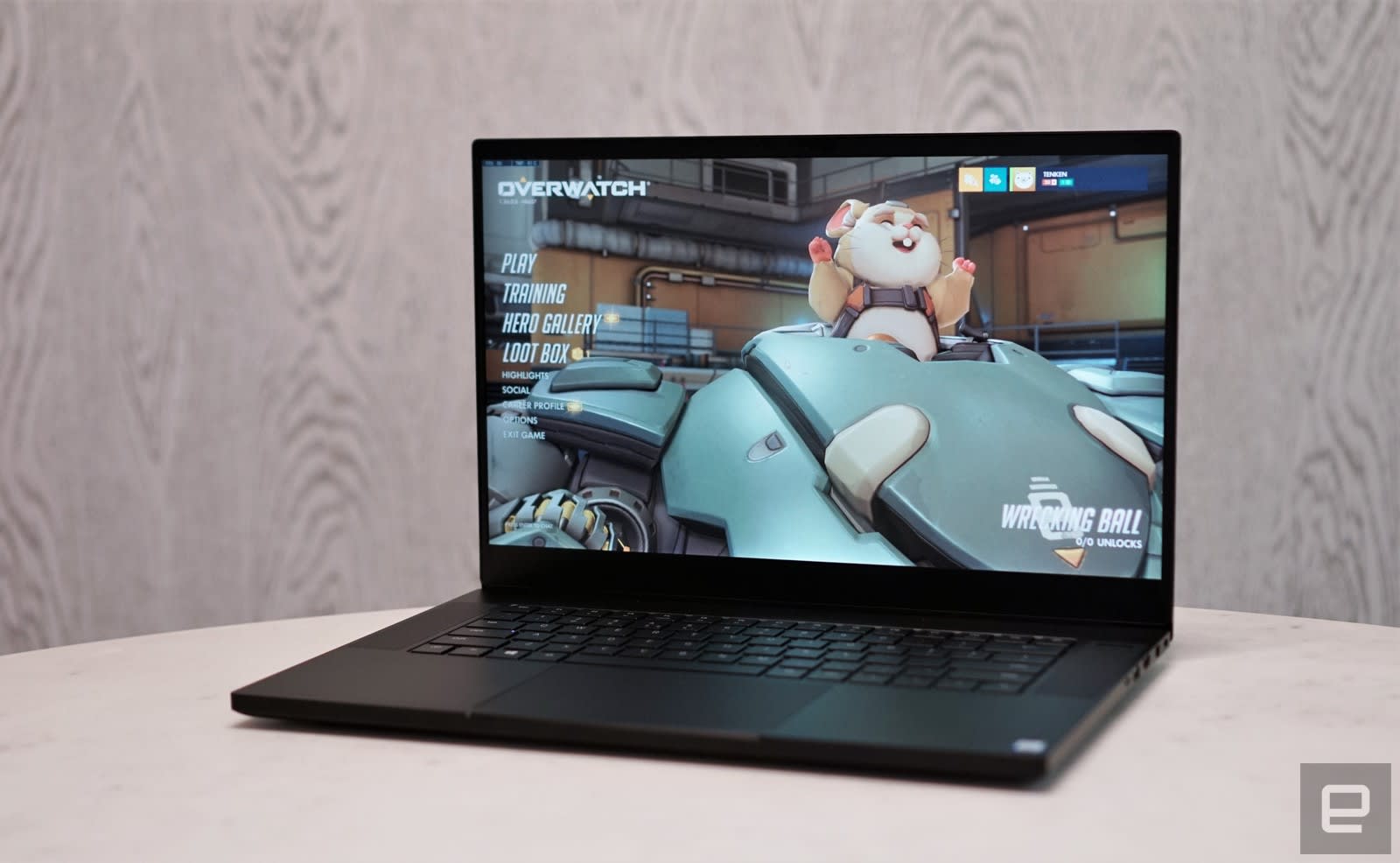 Our review unit came with a GTX 1070 Max-Q, and not surprisingly, the Razer Blade had no trouble handling any game I threw at it. I saw over 100 FPS in Destiny 2, and between 110 and 144 FPS in Overwatch, while playing both in 1080p at the highest graphical settings. What's key is that they went well beyond 60 FPS, making gameplay look smoother on the Blade's 144Hz display. Honestly, that's a more noticeable visual upgrade than the jump to 4K, especially on a 15.6-inch screen.

Unfortunately, the Blade doesn't offer HDR, a technology that lets monitors handle higher-peak brightness and darker black levels. We're seeing HDR in more PC games and streaming video these days, but unfortunately, it hasn't made its way into many laptops. Even without it, though, the Blade has a fantastic display. It's bright enough to use outdoors, and it did a stellar job of recreating Overwatch's vibrant battlegrounds.

When you're not gaming, the Blade's screen is perfect for binging all of your favorite shows. We tested the 144Hz display, which not only smoothed out gameplay, but also added a bit of polish to everyday tasks. After seeing how silky merely scrolling through a web page could be made it hard to go back to my usual 60Hz monitor. 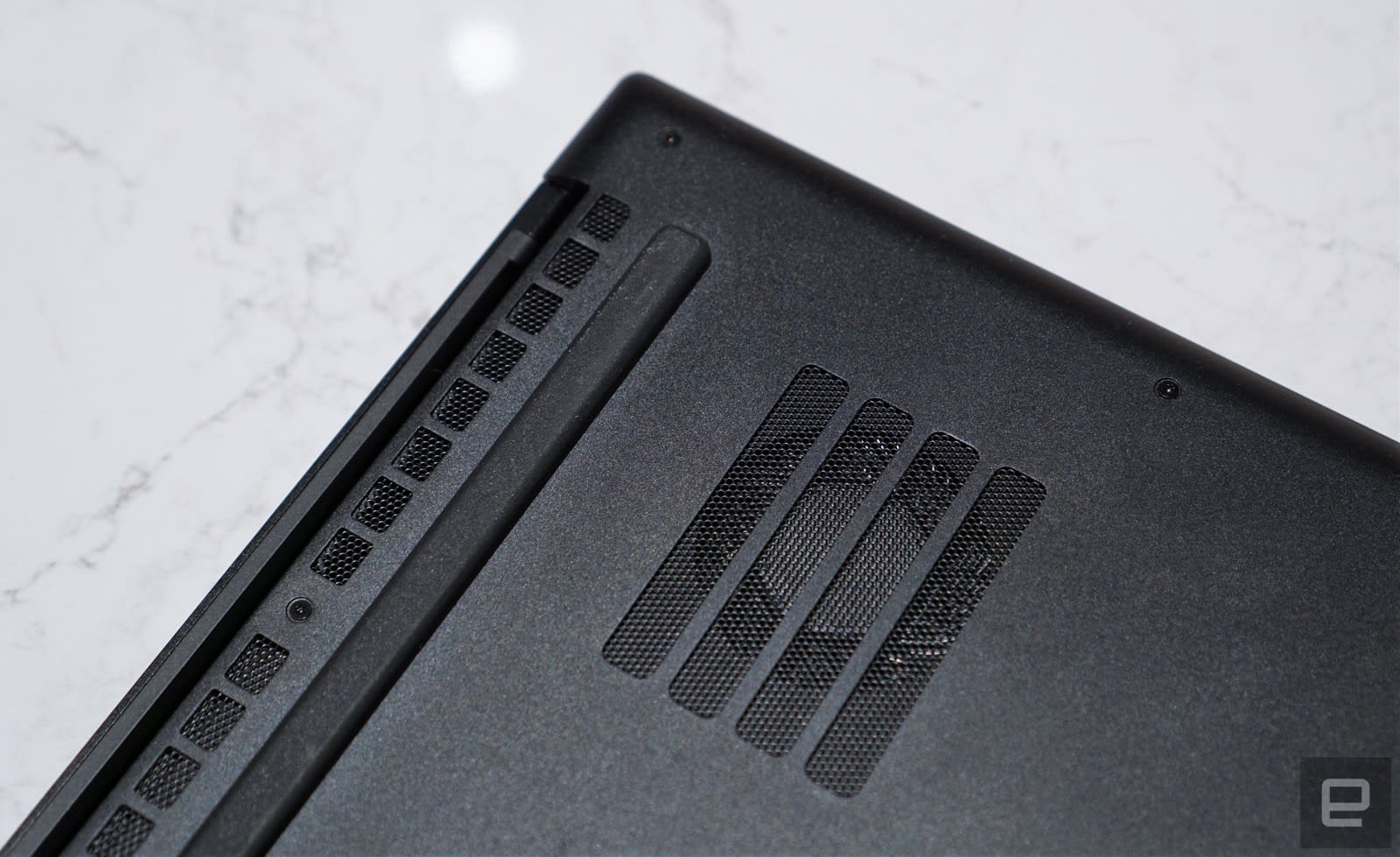 To keep heat in check, Razer designed a thin vapor cooling chamber that covers the CPU and GPU. After half an hour of play, the Blade's GPU temperature hovered between 80 and 84 Celsius, which is close to what I saw from MSI's Stealth Thin. In comparison, the MacBook Pro's GPU sits around 85 to 90 degrees Celsius under load. The Blade gets very hot along the bottom, as well as right above the keyboard, so don't plan to do much gaming directly on your lap.

There are also two fans underneath the laptop, which blast cool air through heat spreaders. They get a bit loud while you're gaming, but not much more so than the competition. It probably won't matter much if you're wearing headphones, but it could be distracting for people nearby in a quiet bedroom or office. 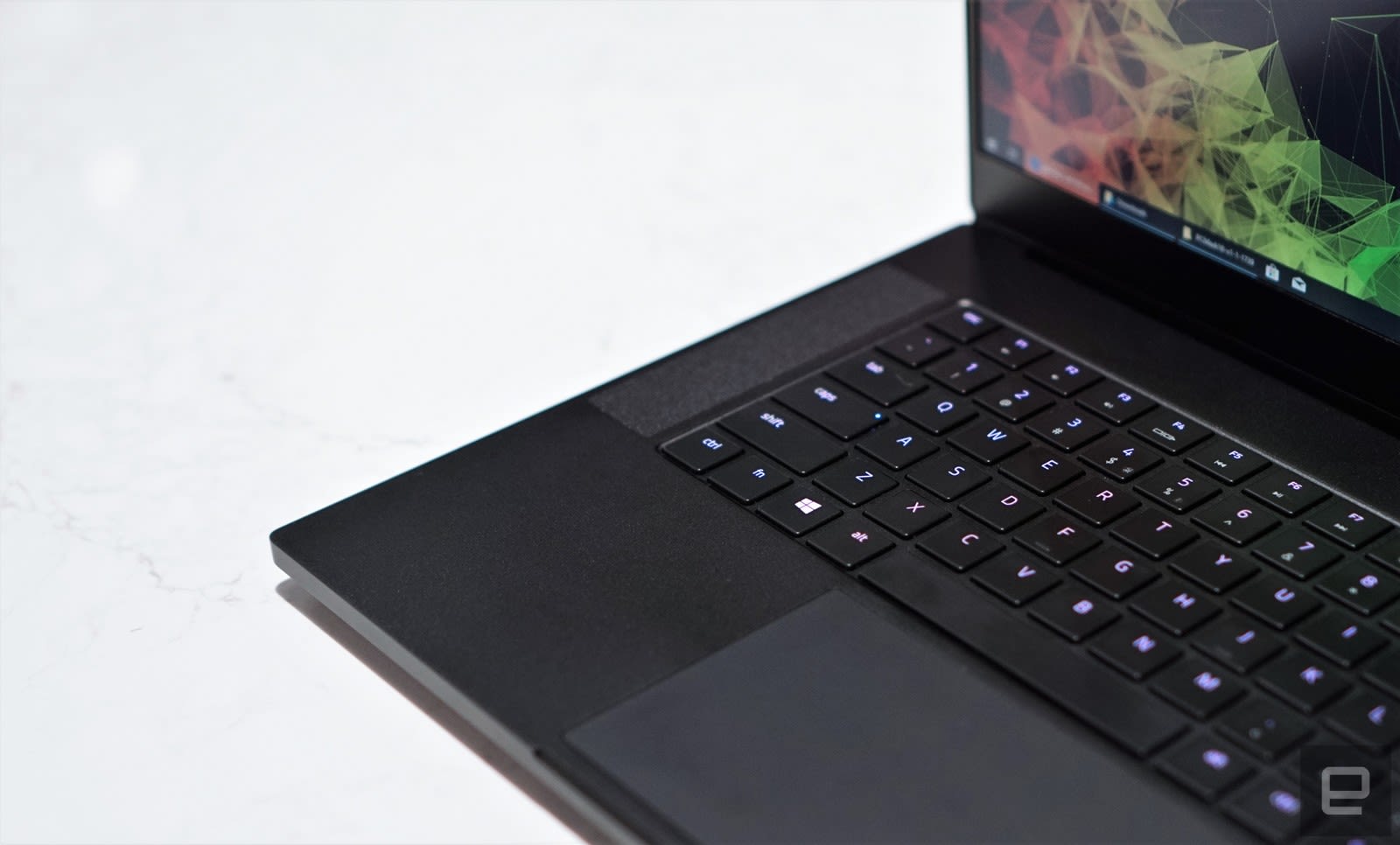 The Blade is also the rare gaming laptop where its input hardware keeps up with the best traditional notebooks. Its keyboard simply feels great, with a satisfying amount of key travel. The keyboard is also comfortable enough to actually get some work done, something that's not always true of gaming notebooks. I didn't notice any slowdowns or typo increases, compared to my usual desktop keyboard. And as you'd expect, it includes Razer's Chroma RGB lighting. Razer also added a new Microsoft Precision Touchpad that's 50 percent larger than the last model. It's one of the best PC trackpads I've ever used, thanks to its smooth glass surface and responsive performance.

Similarly, the Blade offers up something of the best battery life we've seen in a gaming laptop. The Blade lasted eight hours and 50 minutes in our standard test, which involves looping an HD video until it dies. It's almost two hours more than MSI's GS65 Stealth Thin, and an hour beyond Gigabyte's Aero 15X. 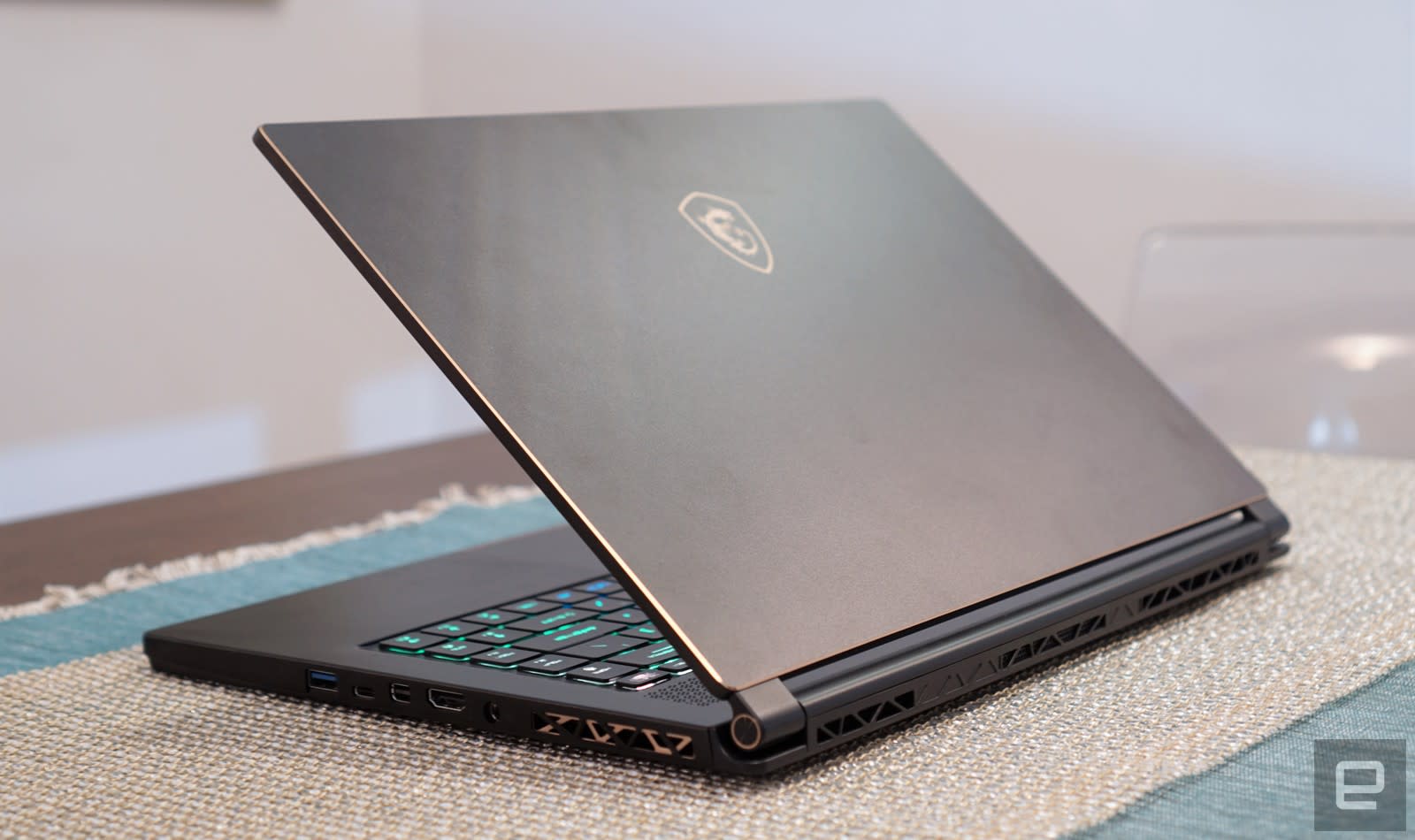 Basically, you'll be paying a premium in a category that's already high-end. Razer is aiming to be a prestigious brand, just like Apple, and that's not something that could be affordable to all. If you want to get the most power available today though, look to the laptops with NVIDIA's GeForce GTX 1080 Max-Q, like the ASUS Zephyrus. 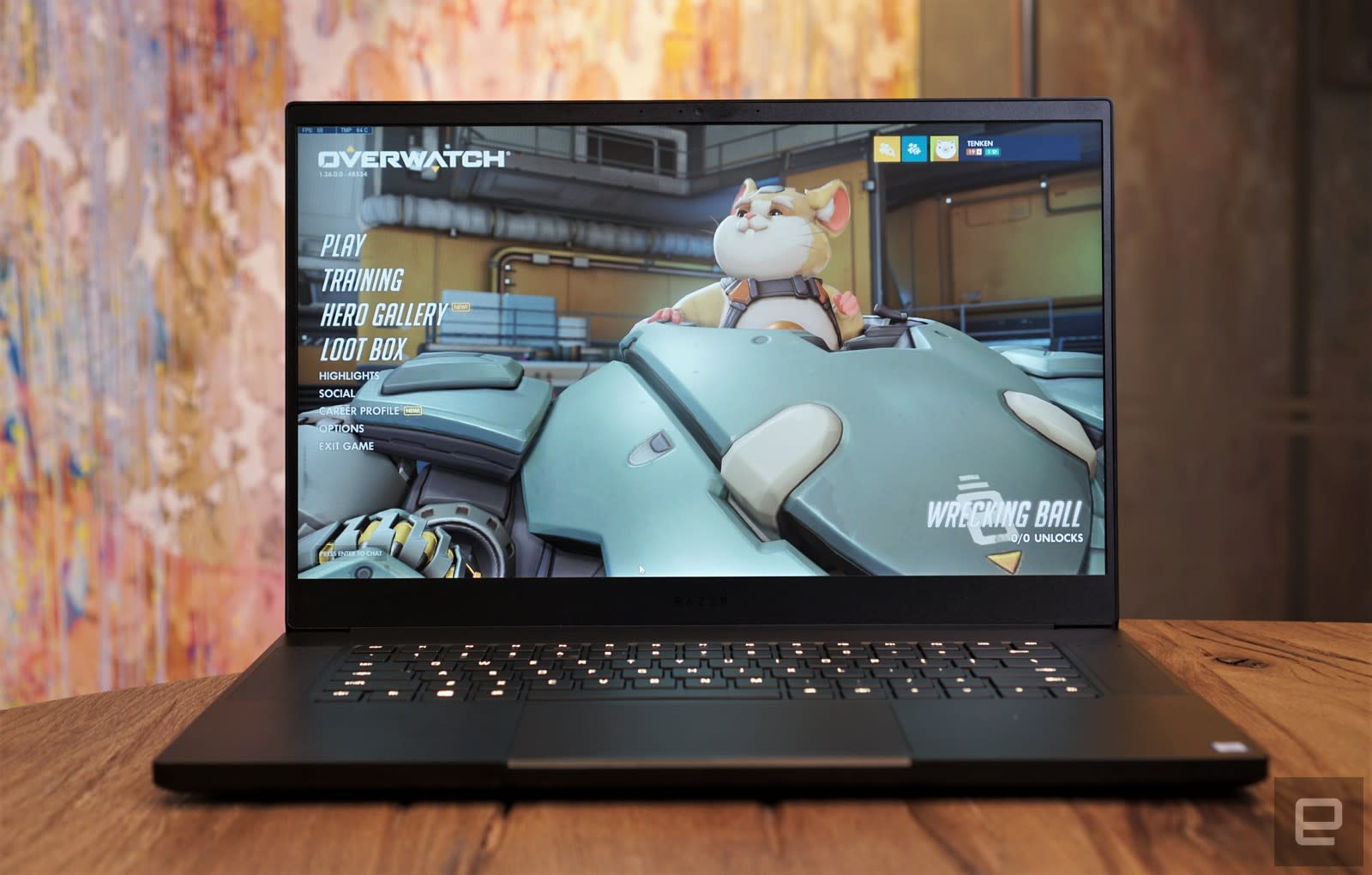 The Razer Blade isn't meant for everyone. Those who can afford it can look forward to being the envy of gamers and non-gamers alike. And you get what you pay for: a machine that will play everything and look good while doing so.

All products recommended by Engadget are selected by our editorial team, independent of our parent company. Some of our stories include affiliate links. If you buy something through one of these links, we may earn an affiliate commission. All prices are correct at the time of publishing.
View All Comments
Razer's Blade is almost the perfect gaming laptop