Mixed reality art is lost in the madness of Times Square

I stood under the blistering hot sun as my phone grew warmer by the second. It was so hot I could barely hold onto it. Unfortunately, my phone was crucial to the Times Square art installation I was there to cover. Unmoored is a mixed-reality and augmented reality experience by artist Mel Chin, powered by Microsoft. It reimagines New York as a city lost to climate change and is overlaid on a massive 24-foot sculpture in real life. The MR part of it uses HoloLenses, and is only available until July 13, but the rest of the exhibit will remain open to the public through September 5th.

Unmoored is largely the same across both the app and HoloLens versions, especially if you plug in your earphones. The main difference is the headset offers a slightly more immersive experience as you won't have to hold up a phone. The piece starts with a virtual version of the sculpture before you falling apart, and planks of wood flying together to build a giant ship. You'll have to crane your neck and watch it all happen overhead, which is more tiring when you're using your phone.

After about thirty seconds, the vessel is completed and sails off towards the south of the city. Slowly, other boats appear through the buildings and pass above you. They increase in number until the virtual New York waterway gets almost as congested as it does in real life. Then, it all fades away to become an underwater wasteland with plankton floating around.

It's a familiar scene, one that seems plucked right out of movies like The Day After Tomorrow and 2012. All that was missing was dramatic apocalyptic music and Lady Liberty's head floating by. 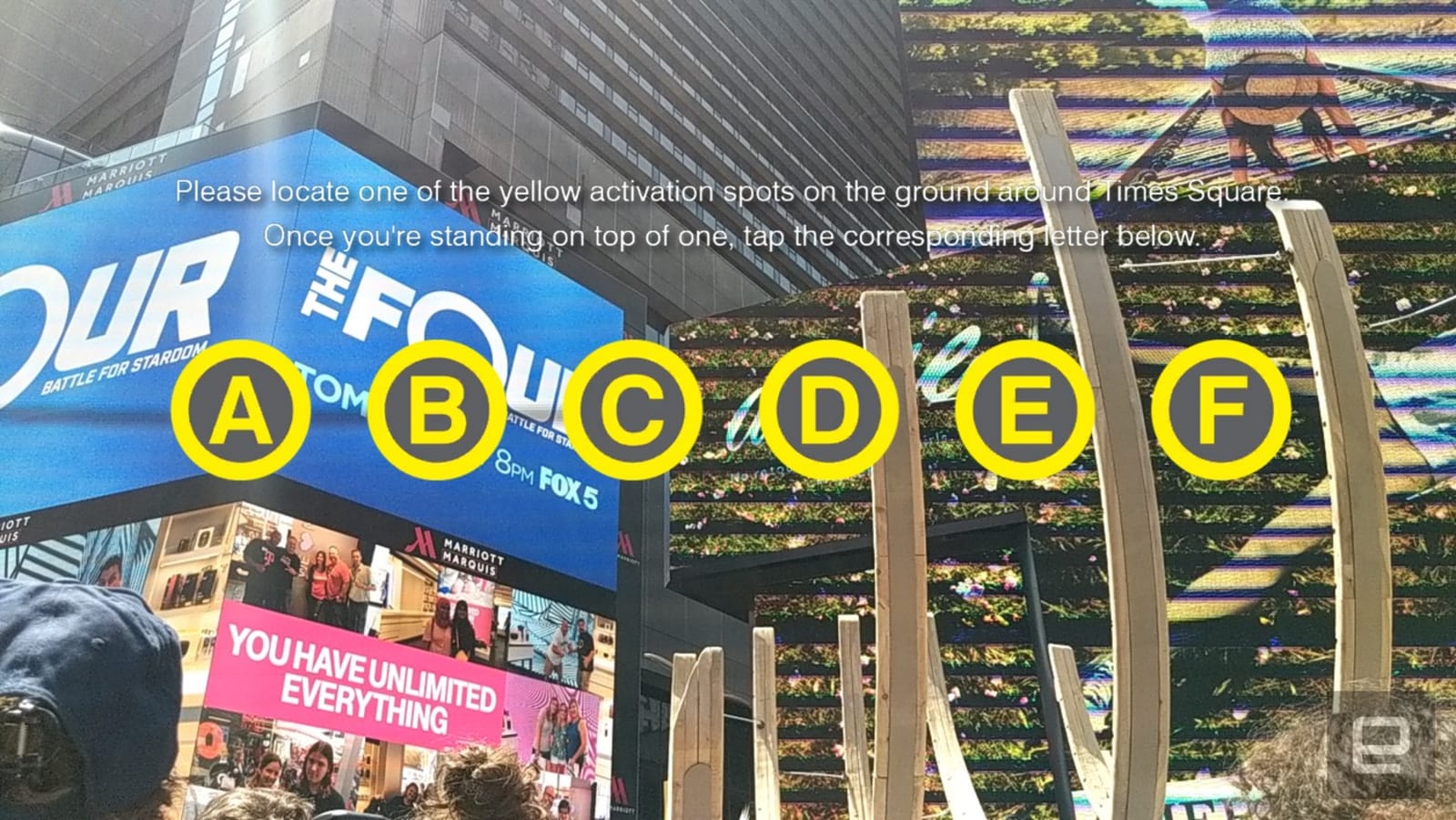 Thankfully, Unmoored isn't as heavy handed. Chin told Engadget that while the piece is in part about the impact of climate change, he's more interested in how people make sense of what they see. He wants the viewer to walk away wondering what the installation was about, and to discover the answer for themselves.

Chin said he was "animating the desire to research what is being put in front of you so that you can own that information in an original and compelling way. That your thoughts are not framed by others."

It's an important lesson. Unfortunately, the tech gets in the way. First, you'll have to download the Unmoored app, which takes up 100MB on Android and 170MB on iOS. Many tourists will have to use the free WiFi in Times Square to do this, which can take up to 15 minutes, judging by how long my fellow attendees had to wait. Passersby won't have the patience to wait that long, although some tourists might. On my LTE connection though, the Android app downloaded in about a minute. 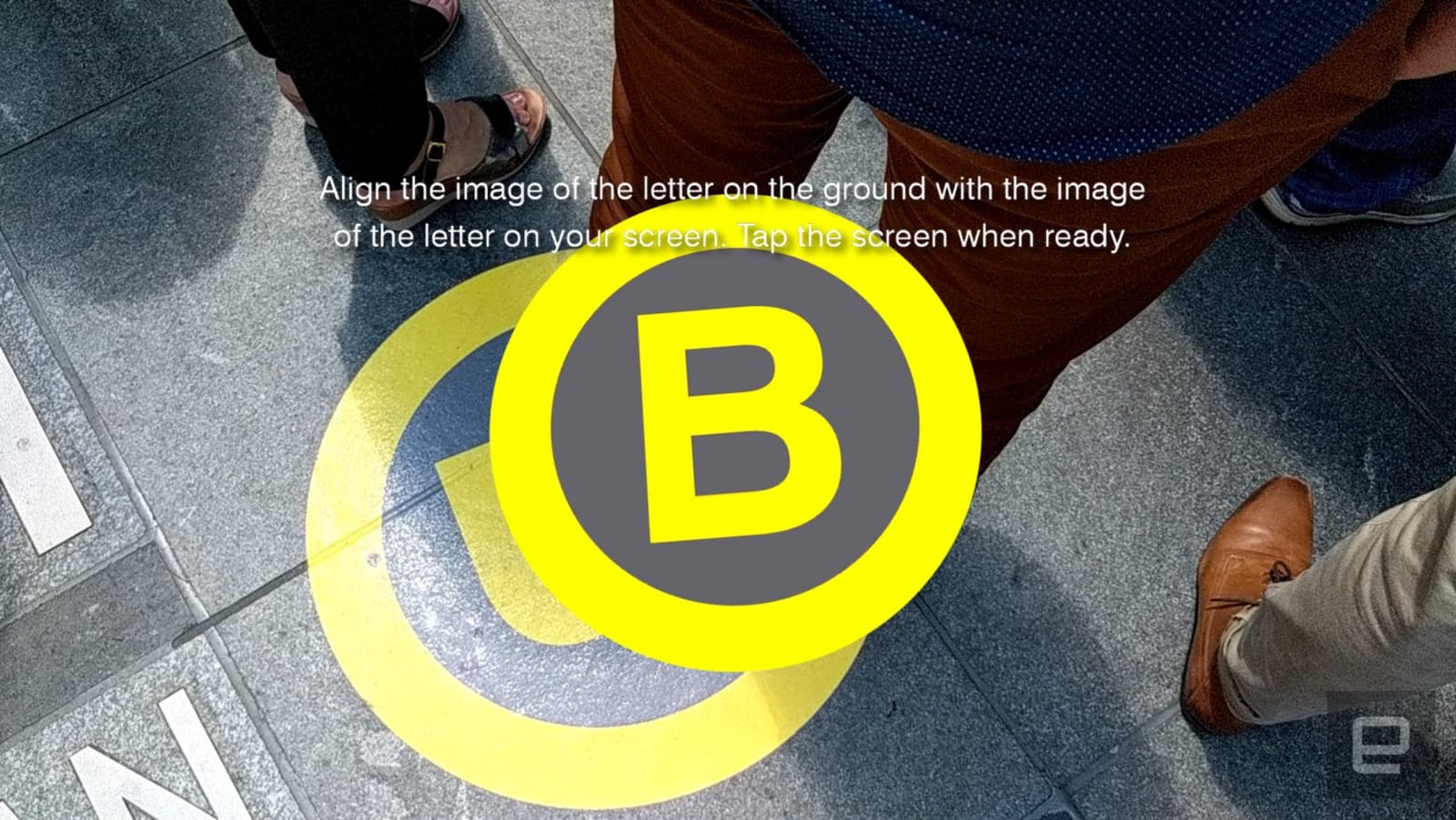 After you open the app, you'll have to find one of six badges painted on the ground around the sculpture and line them up with a digital version using your phone's camera. Once the calibration is done, you can watch the ship come together from where you're standing. The whole thing is visually striking -- the juxtaposition of the wooden structure against the madness of modern monstrosities that is Times Square is beautifully complex in both virtual and real worlds. You can save pieces of this art by recording it with the app or taking screenshots, which is the benefit of using your phone.

Meanwhile, you'll have to wait in line for the HoloLens experience, which is only there for a limited time. During my demo, I had to wait a few minutes for Microsoft's reps to set up the system, and the whole thing crashed about a minute in because the headset overheated. For many members of the general public, this will be their first experience with HoloLens, and Times Square in the middle of summer isn't the best setting for it. Plus, I could barely hear the underwater sound effects even with the noise-cancelling headphones Microsoft provided, and was taken out of the experience whenever an ambulance or fire engine blared by.

The best time to check out Unmoored (if there ever is a good time to stand around Times Square for an extended period) is in the late afternoon, when the sun's relentless rays are blocked by buildings on the west. Tourists will have a fun time taking in the spectacle and marveling at the tech -- a combination that is undeniably New York. Those seeking a deeper meaning may be better off waiting for Unmoored to move to a quieter location. Otherwise, the artist's message may get drowned out by the surrounding chaos.