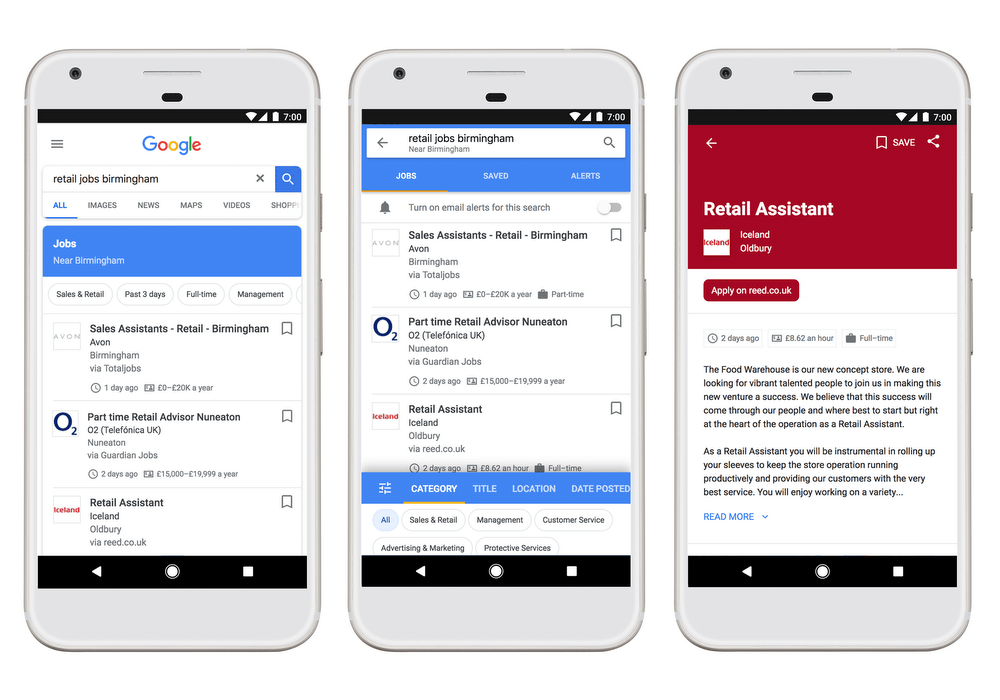 Google is well aware of AI's power. When it's used for good, it can help predict the likelihood of cardiovascular diseases, augment podcast apps, and even help job hunters more easily pinpoint new local opportunities. That's what Google Jobs was designed to do when it launched in 2017 for US users, and today, the feature is finally available for UK jobseekers.

Google Jobs makes searching for your next career simple -- like the US version, all you need to do is type "jobs near me" in the search engine, and a list of positions will appear -- salaries included. If you're signed in, you'll be able to calculate travel distance via Google Maps, too. Google is also determined to cut your scrolling time in half with a save function that helps you track appealing jobs. Thanks to Google's collaboration with Gumtree, Guardian Jobs, Haymarket, CV-Library and other job-matching organizations, you'll be able to see listings as soon as they surface.

Since its US debut, Google Jobs has gone live in several countries including Canada and India. Google says its responsible for a 130 percent rise in companies displaying available jobs in search results and helped millions with potential employment. Of course, landing a gig is another matter entirely, but Google's 'Digital Garage' initiative suggests the company is serious about helping job seekers develop new skills that would make them more employable.

In this article: employment, google, googlejobs, jobhunting, recruitment, services, tomorrow
All products recommended by Engadget are selected by our editorial team, independent of our parent company. Some of our stories include affiliate links. If you buy something through one of these links, we may earn an affiliate commission.