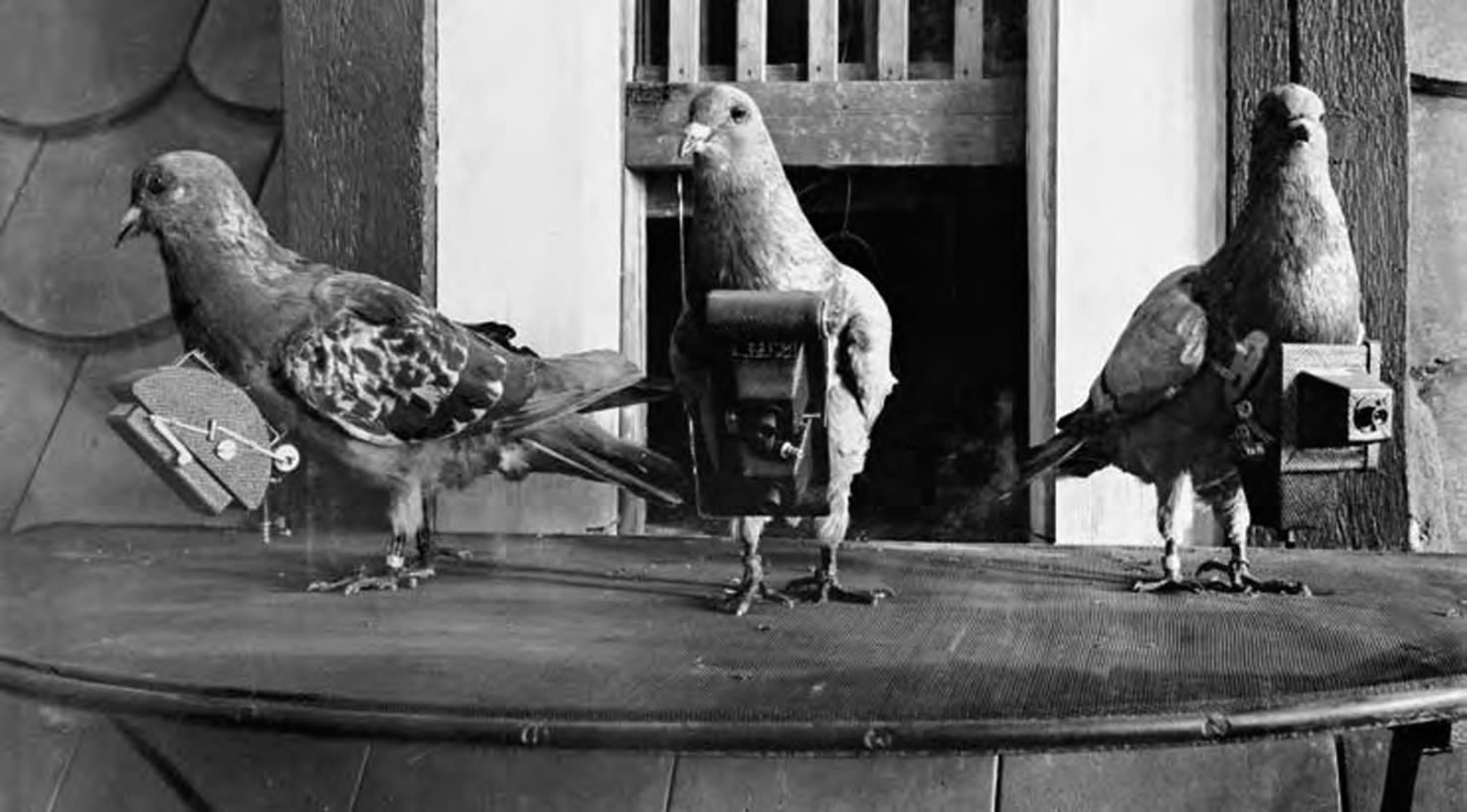 Before drones, there were pigeons.

The first aerial photograph was taken in 1858 by Frenchman Gaspard-Félix Tournachon, also known by his alias Nadar, from a tethered gas balloon suspended over Paris. While the images captured on this flight have since been lost to time, there are plenty of surviving examples of aerial photographs shot during the latter half of the 19th century. In addition to balloons, kites and rudimentary rockets were used to send cameras skyward. Even Alfred Nobel was drawn to the practice, with one of his last patent applications being for a method for rocket photography. It's hard to grasp how challenging this was at the time. We need only load up Google Earth to see our house from space, or buy a hobbyist drone to capture our own aerial panoramas. Long before satellites and quadcopters, though, Dr. Julius Neubronner started strapping cameras to pigeons. Julius Neubronner was an apothecary, which to his time was the equivalent of a pharmacist today. It was a family business, and homing pigeons were counted amongst its employees. Just as his father had done before him, Neubronner used pigeons to send and receive medicines and messages. As the story goes, sometime around 1903 Neubronner sent one of his pigeons out on assignment only for it not to return. The bird wasn't taken ill and preyed upon, however, eventually turning up a month later in suspiciously good condition.

Neubronner grew curious about the movement and habits of his pigeons when they were away from home, and being an avid photographer, he saw how his hobby might be useful in answering some of his questions. Inspired in part by the Ticka Watch Camera and the quality of test photos he took on a speeding train and a sled ride, he began devising his own miniature camera that could be attached to pigeons via a harness. What he ended up with was a light wooden camera and pneumatic timer that engaged the shutter at set intervals. He filed the first patent for his invention in 1907 with the German patent office and its counterparts in France, Austria and the UK. The German bureau initially refused to grant it, believing what he described to be impossible. A camera was far too heavy for a bird to carry. This changed the following year when Neubronner provided the patent office with photographic proof from his flying friends. Between 1908 and 1909, Neubronner's pigeon camera was covered in various newspapers, including the New-York Daily Tribune, The Columbian, the Los Angeles Herald and Northern Star (based in New South Wales, Australia). The inventor gained further notoriety in 1909 when he appeared at the International Photographic Exhibition in Dresden and International Aviation Exhibition in Frankfurt, as well as the Paris Air Show in 1910 and 1911. He won various awards at these events, but also seized a commercial opportunity. Visitors could watch the arrival of his flock, and from his horse-drawn dovecote and compact darkroom, he would develop the images his pigeon cameras had just taken and sell them as postcards.

Not only was it a strange spectacle, but a notable advancement in aerial photography. Previous methods were elaborate, requiring complicated equipment and setup. The pigeon camera was small, elegant and mobile. To Neubronner, it wasn't just a hobby or a commercial novelty; he saw potential military applications in reconnaissance and surveillance as well. Despite some logistical issues, most notably getting pigeons to return to a dovecote that by necessity had to move around, Neubronner gained the interest of the Prussian War Ministry. In order to demonstrate their worth, Neubronner photographed a waterworks in Tegal, Germany, using only his birds, and was due to negotiate a state purchase of his invention in the summer of 1914 after a trial run in Strasbourg for the military's benefit. But just weeks prior, World War I broke out and he was forced to turn over his pigeons and cameras to the state before striking a deal. The birds were initially used for reconnaissance, apparently with some success, but were soon demoted to message carriers, which was seen as a more valuable post during the drawn-out conflict. Neubronner's dovecote was present at the Battle of Verdun, and proved so useful that pigeon messengers were drafted in in bigger numbers at the Battle of the Somme.

After the war, however, the military told Neubronner it wasn't inclined to pursue the invention on account of it having limited value. While still pretty ingenious, pigeon photographers weren't without their shortcomings. You had no control over what the cameras captured, nor could you guarantee the birds would return, whether that be down to moving the dovecote location or a well-placed bullet. And though it was only a decade and change since the Wright brothers first took flight, during World War I aerial combat and surveillance through photography had evolved rapidly. Though sending pigeons behind enemy lines was better than sending people, we'd already found a better way.

Incidentally, camera-equipped pigeons were going to be added to Battlefield 1 through a DLC expansion, but never made it into the game after the spotting mechanic was deemed overpowered.

Neubronner apparently developed a dozen or more designs of his pigeon camera, including versions with multiple lenses and a panoramic model, which is on display at a few museums in Germany. His final iteration weighed just over 1.4 ounces (40 grams) and was good for 12 exposures, but after dedicating more than a decade of work to his pigeon cameras, they never became more than a celebrated oddity. His legacy doesn't end there, though. Around the time of Neubronner's death in 1932, the German army revisited the idea, creating a pigeon camera that could take 200 pictures per flight. The French had a concurrent program that used not one, but two animals. Pigeons carried the cameras, and dogs ferried the birds behind enemy lines before releasing them on their mission. A Swiss clockmaker, Christian Adrian Michel, also went about improving upon Neubronner's designs in the early 1930s, specifically adapting his panoramic model to use 16mm film and creating a clockwork exposure timer. He patented his innovation in several European countries in 1937, but only roughly 100 cameras were produced after his plan to sell it to the Swiss Army fell through. There's little evidence to suggest pigeon cameras were used a great deal in World War II, but the Soviets came across abandoned German trucks in 1942 containing pigeon cameras and dogs trained to ferry the birds in baskets.

You would think that by 1970, aerial surveillance techniques would have rendered the pigeon camera obsolete, but trust the CIA to revive the invention decades later. The agency developed a battery-powered version, though the operations it was involved in remain classified. It's said they weren't employed with great success, however, leading the CIA to abandon the lo-fi spying project. Camera and aircraft technology had come on significantly at this point, and soon after in the 1980s, the first unmanned drones fitted with cameras were developed. And by this time, there were already orbiting satellites capable of sending back real-time imagery. Now, of course, all of this technology is available to the public, not to mention the YouTube videos of eagles flying around with GoPro backpacks. In a happier timeline, though, perhaps pigeons are still entrusted with the job, going about their daily hunt for sidewalk fries while also updating photography for Google Maps.