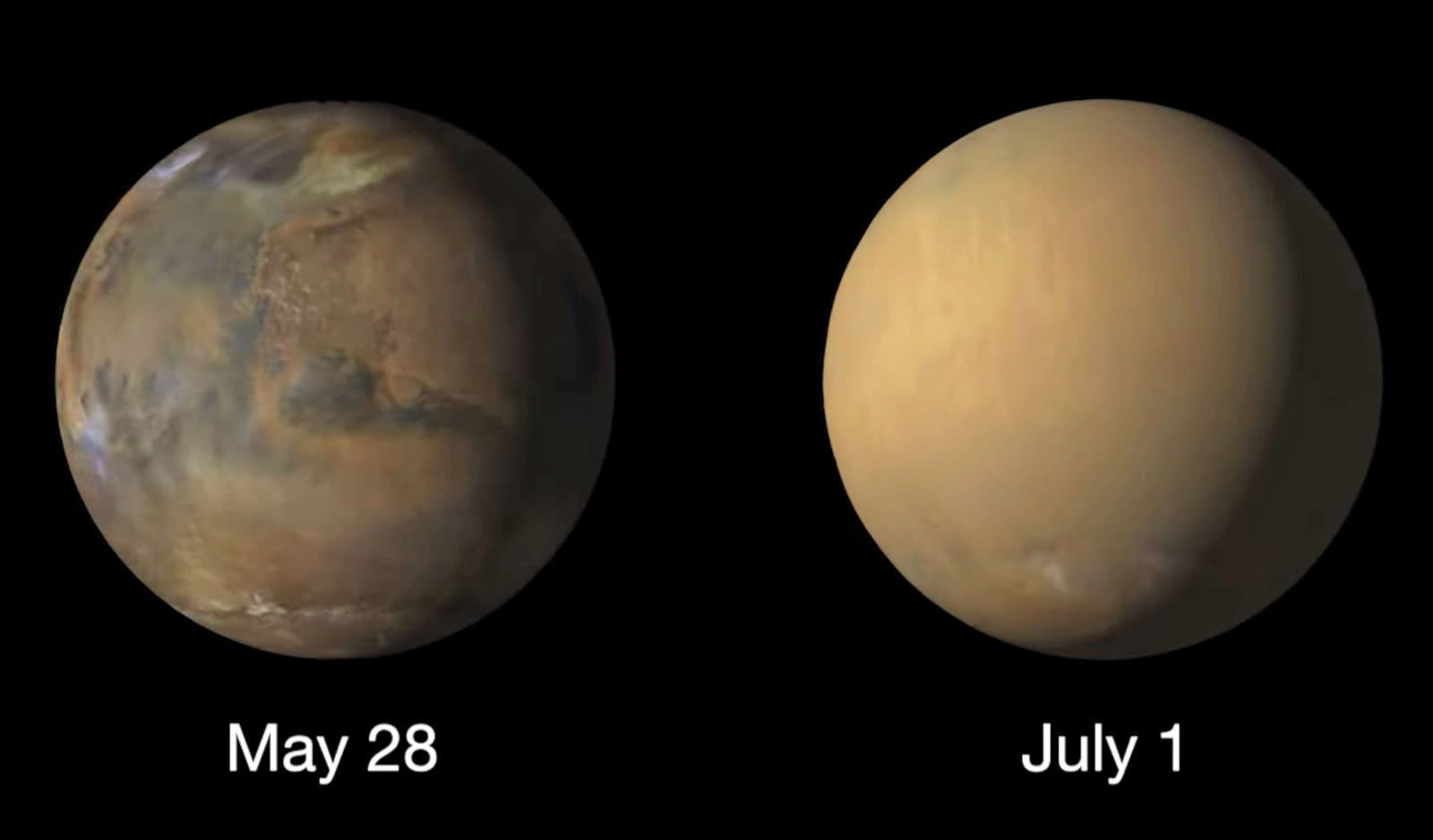 Martian dust storms can make nasty sand devils look cute, and every six to eight years, they can grow large enough to engulf the whole planet. Global-scale storms happen when several smaller ones kick up enough dust to envelope the planet's surface. But since they only occur every once in a while, scientists still don't know much about them, including why they form and how exactly they evolve. They'll soon have a treasure trove of data to work with, though, now that NASA'S Martian probes have trained their eyes on a massive storm that's currently covering the planet with cloud and haze.

[The images used for this video were taken by Mars Reconnaissance Orbiter's Mars Color Imager.]

The smaller storm scientists spotted on May 30th turned into a planet-wide event by June 20th. It forced the solar-powered Opportunity rover to go on standby and conserve its energy, but the younger nuclear-powered Curiosity rover and NASA's orbiters are unaffected and can continue collecting data as the storm rages on. The Mars Color Imager aboard the Mars Reconnaissance Orbiter (MRO) has been mapping the planet every afternoon to track the storm's evolution. MRO's Mars Climate Sounder instrument has also been measuring the atmosphere's temperature changes.

Mars Odyssey spacecraft's THEMIS instrument has been tracking the planet's surface and atmospheric temperature, as well as the amount of dust in the atmosphere. The data it's gathering will help show scientists how the storm grew, changed and dissipated over time. NASA's MAVEN probe is also studying how the storm is affecting Mars' upper atmosphere, while Curiosity is keeping an eye on things from the ground, monitoring winds and measuring dust particles.

It might take some time before we find out if Curiosity and the probes unravel any Martian secret, though. Scientists believe the storm could last for months, and that the haze might only clear up enough for Opportunity to start working again in September.

In this article: curiosity, duststorm, gear, mars, MarsReconnaissanceOrbiter, nasa, opportunity, redplanet, space
All products recommended by Engadget are selected by our editorial team, independent of our parent company. Some of our stories include affiliate links. If you buy something through one of these links, we may earn an affiliate commission.