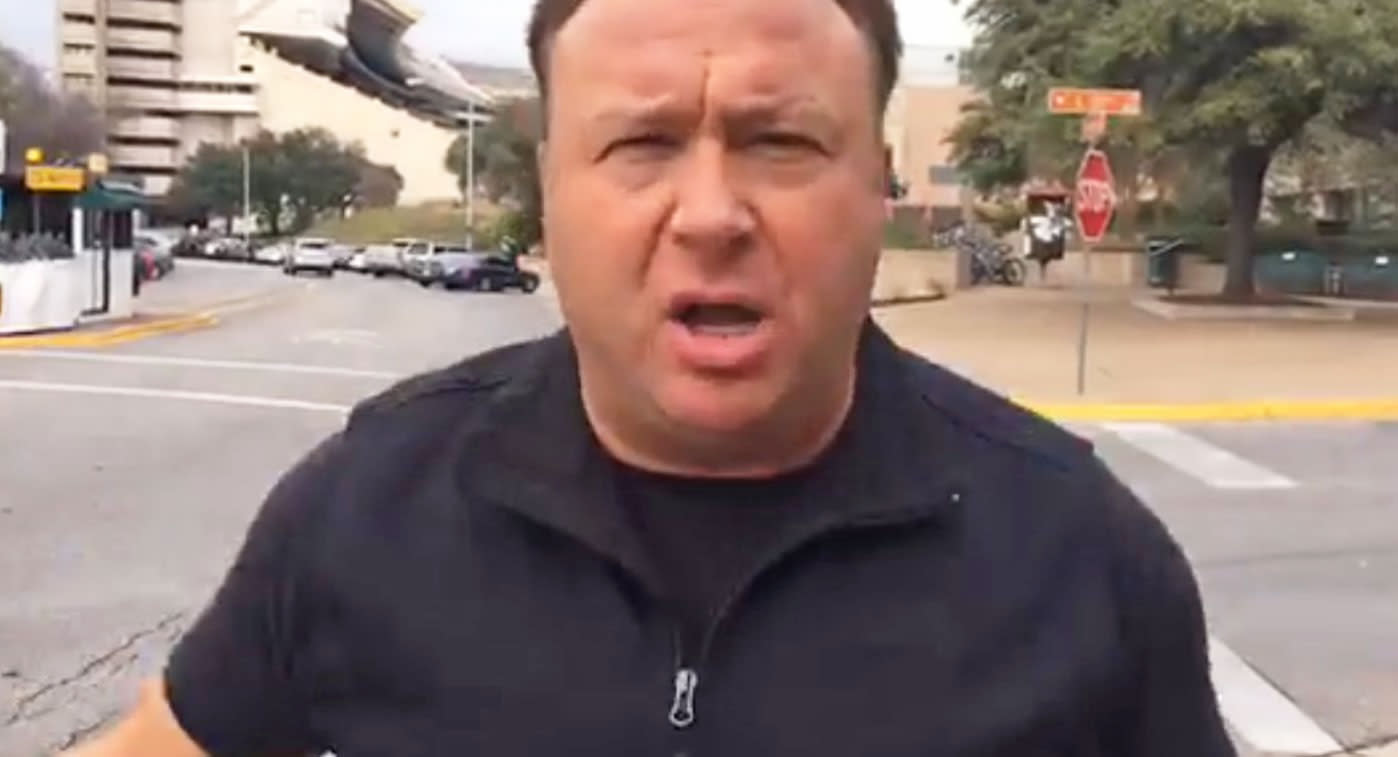 Days after YouTube took down multiple videos from conspiracy theorist Alex Jones' video channel, Facebook has suspended his account on the platform for 30 days. The InfoWars founder had violated the social network's Community Standards, according to Mashable. If he or his fellow admins keep breaking the rules, Jones' personal page could be permanently banned.

"Our Community Standards make it clear that we prohibit content that encourages physical harm [bullying], or attacks someone based on their religious affiliation or gender identity [hate speech]," a Facebook spokesperson told Mashable.

The social network received reports of four videos -- several of which were exactly the same as those taken down on YouTube -- on pages that Infowars and Jones maintained on the platform. Facebook subsequently took that content down and blocked Jones. This functionally shuts him out from posting any content on his own personal page, or on any he's an admin for, during the 30-day period. In other words, other InfoWars admins can keep posting on pages within "The Alex Jones Channel" unless they, too, break Facebook's rules.

After some confusion earlier today, Facebook clarified that Jones had personally received a warning previously, and thus earned the punitive 30-day block for the four Community Rules-violating videos he uploaded. His channel only received a reprimand this time and is still active, but is close to reaching the level where Facebook could permanently remove the page, a spokesperson told CNET.

Whether this sets a precedent for content appearing on Facebook, their ban methodology remains vague. One of the four banned videos had even been marked as acceptable after a moderator reviewed it last month, according to TechCrunch. Only after YouTube took down Jones' videos two days ago did Facebook revisit this content and declare its earlier decision mistaken. While the social network may further clarify this incident, it remains unclear what does and doesn't violate the social network's content guidelines -- especially after it decided just days ago that Jones' rant accusing special counsel Robert Mueller of pedophilia could stay on the platform.

Due to the large number of comments that violated our rules and guidelines, and the extensive amount of time required to moderate a thread of this size, the comment section to this article is now closed. We sincerely appreciate your civil and thoughtful participation.

In this article: alexjones, ban, facebook, infowars, internet, politics, services
All products recommended by Engadget are selected by our editorial team, independent of our parent company. Some of our stories include affiliate links. If you buy something through one of these links, we may earn an affiliate commission.
Share
Tweet
Share