The AI business revolution must protect human workers above profits.

Artificial intelligence is no different than the cotton gin, telecommunication satellites or nuclear power plants. It's a technology, one with the potential to vastly improve the lives of every human on Earth, transforming the way that we work, learn and interact with the world around us. But like nuclear science, AI technology also carries the threat of being weaponized -- a digital cudgel with which to beat down the working class and enshrine the current capitalist status quo.

Just look at how Amazon's automated facial recognition system is being marketed to law enforcement and government agencies, despite its obvious racial biases, or Wisconsin's automated sentencing tool, Compas, which determines a defendant's prison time via a proprietary and secret algorithm. It just so happens to sentence black and brown defendants to longer terms than their white counterparts for similar crimes.

But this dystopian glimpse into our future isn't the only option. A great number of academic researchers and nonprofit outfits are hard at work figuring out how to leverage the transformative qualities of AI technology to improve life for everyone, not just those at the top.

"Interesting thing about AI and automation in general is, across the board, one of things it does do is increase productivity," Dr. Illah Nourbakhsh, professor of ethics and computational technologies and director of the CMU CREATE Lab, tells Engadget. "But when you increase specific productivity in high-income socioeconomic groups, what it does is increases wealth, because capital wealth goes up.." However, at very low-income levels, automation has an inversely small effect, "because as it turns out, the specific cost of using humans is still much lower than a lot of automation technologies."

Things get tricky for the middle class, however. Nourbakhsh points out that for median income levels, automation causes productivity and profit margins to rise while work hours decrease. And when companies need fewer labor hours filled, they lay off staff. 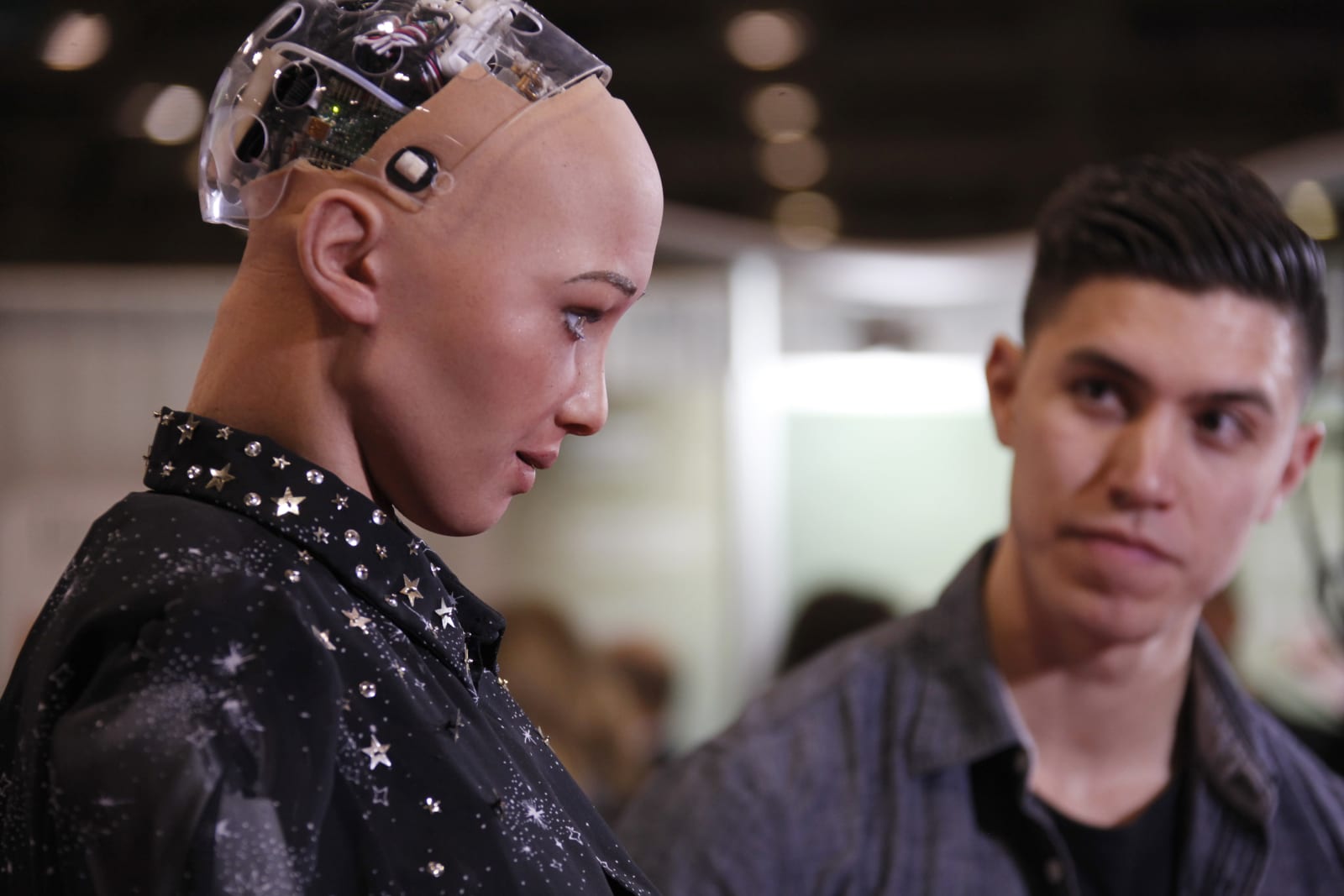 "What we can expect is that an increasing number of jobs and, in particular, lower paying jobs will be replaced by artificial intelligence," Dr. Anton Korinek, associate professor of economics at the University of Virginia and a faculty research fellow at the National Bureau of Economic Research, tells Engadget.

"At some point," he continued, "I think it will become difficult to find jobs where the market rate of workers -- the rates in the absence of any government intervention -- will actually cover the cost of living. [...] Even people who could find a job and would be paid the market rates, could no longer live off that wage by itself." Korinek fears we may reach this point within the next quarter century.

"Fundamentally, I think we have to change the civil contract long term," Nourbakhsh argues. "There's no way to increase GDP, increase productivity and decrease the marginal need for full employment and get away with that. I think you have to decrease work hours, you have to change the way wealth is distributed." Nourbakhsh points to rebalancing the distribution of ownership of capital equipment, "particularly when the capital equipment is placed under labor income," as one potential solution.

Converting to a "high touch" economy is another possibility. High touch denotes a business that maintains a very close relationship with its customers. Your barber or hairstylist work in the high touch economy, as does your bartender. They know your name, know what you like (be they cuts or cocktails) and you know them right back. There's a relationship there, and it's what's used to be called "a community." Your cable company, ISP, and cellular service carrier? Not high touch businesses. Not by a long shot.

"Rethink the degree with which we want high touch," Nourbakhsh implores. "When you go into Macy's, look how 10 people with white gloves on are helping you out. Those heights of social interaction are actually precisely what would help us... they're precisely what AI can't do."

Korinek isn't convinced. "The ideal thing would be a mix of technological and economic policy solutions. I believe the technological solutions, on their own, may, at best, delay the problems but would not fully solve it." He points towards an application of artificial intelligence -- one that augments a human worker's decision-making skills and productivity, rather than replaces them outright -- as one alternative.

"That would be a way of actually harnessing the power that we've already got," Korinek argues. "Protection of workers for the benefit of workers, especially less-educated workers." Korinek points to three primary interests in the current scenario: workers, who produce the labor; capitalists, who own the means of production; and innovators/entrepreneurs, who improve economic efficiencies. "If we first let the innovation happen, let the entrepreneurs reap the large reward, and let the workers fall behind. Then we say, 'Oops, something bad happened.' We should actually compensate the workers and we should take away money and taxes from innovators and give it to workers. Then you will save the problem that nobody will want to give up something that they consider they have already.

Korinek points to our existing intellectual property system as one solution. "By setting up the way that our patents disburse, we can actually shave out the gains of innovation. The more intellectual property protection we give to innovators, the more they will gain and the less of the gains will go to workers. And vice versa."

However, such a tact could lead to a pushback from innovators who wish to avoid paying into the social contract. Kornek states, "Innovators often devote effort to actions which enhance their market power -- lowering real incomes of workers still further -- and to not paying taxes." Such schemes could prove to be counterproductive, stirring up resentment and political opposition from the working class who view such actions as an affront to the funding of the public resources on which they partially rely.

We've already started to see examples of this phenomenon in action. "In the past couple of months, we have seen some of the backlash against large technology companies, but in a different realm," Korinek explains. "In the realm of privacy protection, political manipulation, fake news. So there you can see how powerful a connection when society becomes aware how technology and technology policy can shape our world."

AI can also be leveraged to help the dis-employed reenter the workforce faster and with improved skill sets, says Dr. Milind Tambe, founding co-director of the USC Center for AI in Society (CAIS). CAIS is a collaboration between the USC School of Engineering and School of Social Work that focuses on public health, conservation and public safety and security.

CAIS is currently working on a program to accelerate the creation of Cognitive Task Analysis. CTAs are "expert-based job training and retraining" systems -- think of them as analog versions of the downloadable "whoa, I know Kung Fu" lessons from the Matrix or Cliff Notes for a profession. If you need to learn how to be a radiologist, CTAs can help.

Unfortunately, developing CTAs is a dull, time-consuming task involving multiple interviews with experts in the respective field and countless hours of interview transcription followed by in-depth analysis to extract "key nuggets of knowledge from interesting experts and then use those key nuggets of knowledge to train newer people -- putting them through the same school day curriculum," Tambe explains.

"This is a very tedious task for a human being," Tambe continues. "Comparing such interviews across multiple experts to figure out what are the key steps that are agreed upon and if there are inconsistencies how to resolve them."

AI would greatly accelerate this process, from conducting and transcribing interviews to extracting the key steps and resolving inconsistencies. "This is, I think, what we need to teach a novice in order to train them to fulfill this task," Tambe concludes. Of course AI, like any other technology, is not without its shortcomings. In its current iteration, AI is just slightly less racist than your uncle who's no longer allowed at family gatherings. However, this is not the fault of the system itself, but rather the people who designed it. "The way that I view [these shortcomings], they're not specific to AI," Korinek says. "In some ways AI is kind of continuing and reflecting all the biases that are already built in for AI."

Dr. Nourbakhsh recalls a recent incident in which the CEO of a large company (which he declined to name) announced at an all-hands meeting "very excitedly, that they were eliminating gender-bias in hiring because he was proud to announce that as of next year, they'll be doing all of their hiring using AI. It's kind of hilarious, right?"

"But what's interesting and important to understand is that highest-level decision-makers, the CEOs, the chairmen of the board, aren't technologically fluent enough to actually understand this issue deeply," Nourbakhsh explains. "So they can get onstage and make an announcement like that with a straight face."

Instead, Nourbakhsh argues that the only way to eliminate this bias is to keep a human "in the loop" to vet the conclusions that the AI comes to. "There's another trend which is kind of explainable AI or transparent AI, which is AI being able to back up its decisions and explain to you why it made the decision it made," he says. "That's also somewhat useful, but in the end of the day, explainable AI even is only useful if you have humans willing to ask the hard questions of that AI system to understand and legitimize decisions."

"We need to think differently about design and stop having the AI be a replacement technology and instead have it be an enhancement of human decision making capability," he concludes.

All products recommended by Engadget are selected by our editorial team, independent of our parent company. Some of our stories include affiliate links. If you buy something through one of these links, we may earn an affiliate commission. All prices are correct at the time of publishing.
How we can all cash in on the benefits of workplace automation
AI
capitalism
CMU
hightouch
robots
tomorrow
workplaceautomation