Samsung Galaxy Note 9 hands-on: All about the S Pen

What a power move.

Hello, stylus, my old friend. I've come to talk with you again.

Today Samsung unveiled the Galaxy Note 9 -- the latest in its flagship big-screen phone series. Like its predecessors, it comes with a stylus, which has gotten a refreshing makeover. Samsung also added an AI photography feature, updated the dual cameras and threw in some compelling performance improvements that power users will appreciate.

The first thing you'll notice is that there are no longer black, silver/gray or gold options. This year's Note comes in lavender, blue, metallic copper and midnight black. (The last two colors may or may not be available, depending on your region.) The lavender and blue handsets come with a colored S Pen in either purple or, surprise, neon yellow respectively. (The copper and black phones include styli that match the phone.) It's like putting bright shoelaces on your dark colored kicks, eye-catching but it doesn't affect functionality.

But there is a major difference with the Note 9's S Pen. Thanks to a Bluetooth Low Energy module and a supercapacitor, the stylus can act as a remote control for the handset. This might sound nutty at first, but I was surprised how useful it can be. There's a multitude of scenarios in which a remote control for your phone makes sense. From up to 30 feet away, you could trigger your camera shutter, change slides in your presentation or skip to the next song on your playlist.

Each time you slide the S Pen back into its dock on the phone, it recharges in under a minute. On a full charge, the stylus should last about 200 clicks or 30 minutes idle. For now, the feature only works with some apps, including Samsung's own native ones, Microsoft's and Google's suite of tools as well as Spotify. Samsung is making its SDK available to developers so others can implement it. I really hope they do, because during my brief time with the new S Pen, it worked quite well. 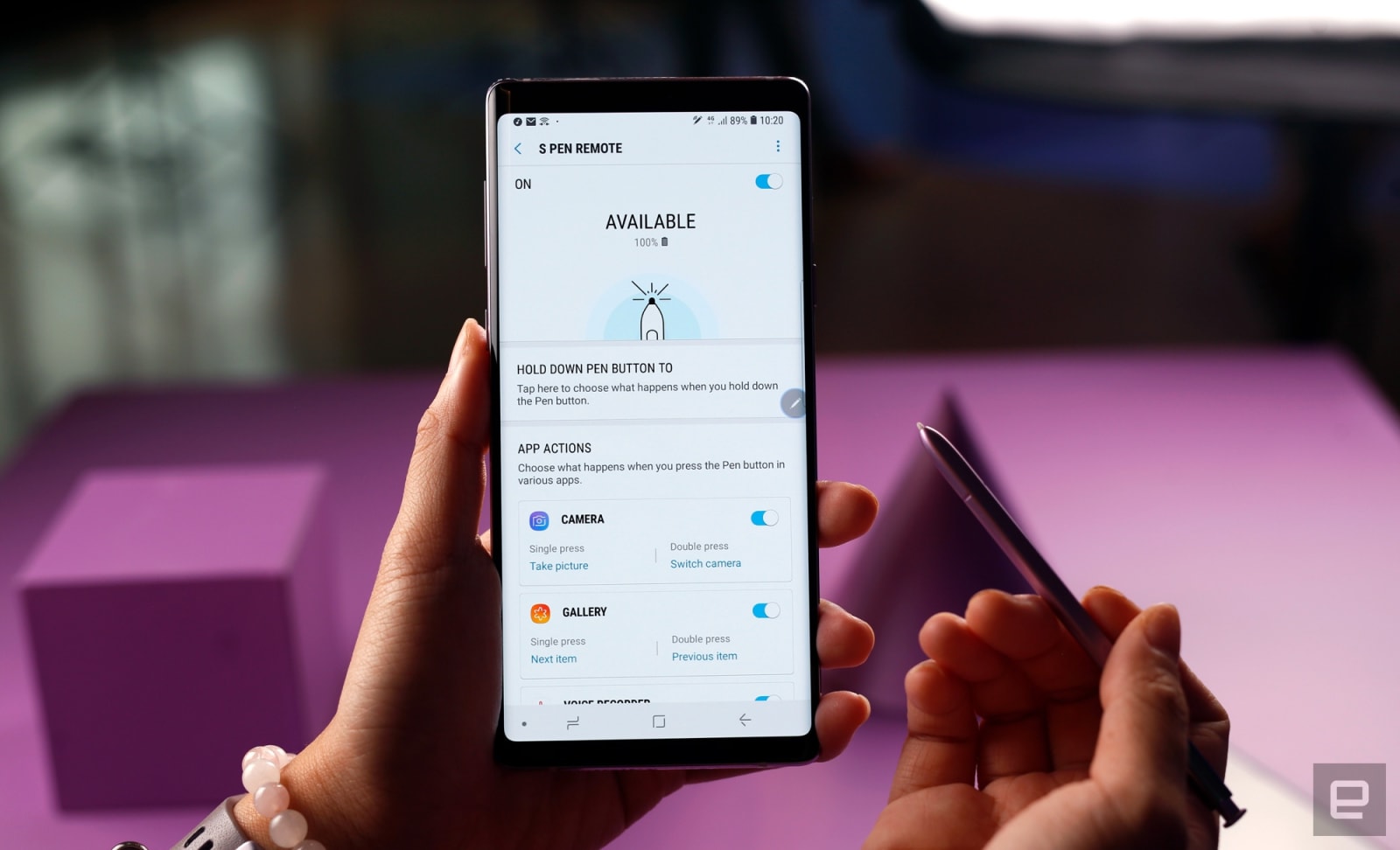 You can customize certain actions, like long-pressing the S Pen button. By default, that opens the camera (even when the Note 9 is asleep). Double click to switch over to the front camera, and click it once to snap a picture. Barring some trouble it had registering a double click, everything went smoothly.

Helpfully, the Note 9 displays a round badge with a pen symbol that you can hover over with the stylus to see what actions are available (double click to see next photo in Gallery, for instance). Then, you can enable these for individual apps in the settings. Even at this early stage, the S Pen's remote controls feel well thought out.

Everything else about the S Pen works more or less the same as its predecessor -- you'll still have useful tools like Air Command and Translate, as well as the ever-entertaining Live Message.

The Note 9 borrows the camera from the S9 Plus. That means it has the same Dual Aperture feature that opens up the lens to f/1.5, letting in more light. There's also the Dual Pixel autofocus that makes capturing sharp shots easier and faster, and from the few photos I took during our hands-on, Samsung's cameras continue to be excellent. Granted, we were in a nicely lit room with colorful props, so we'll have to see how it fares in a real world environment. 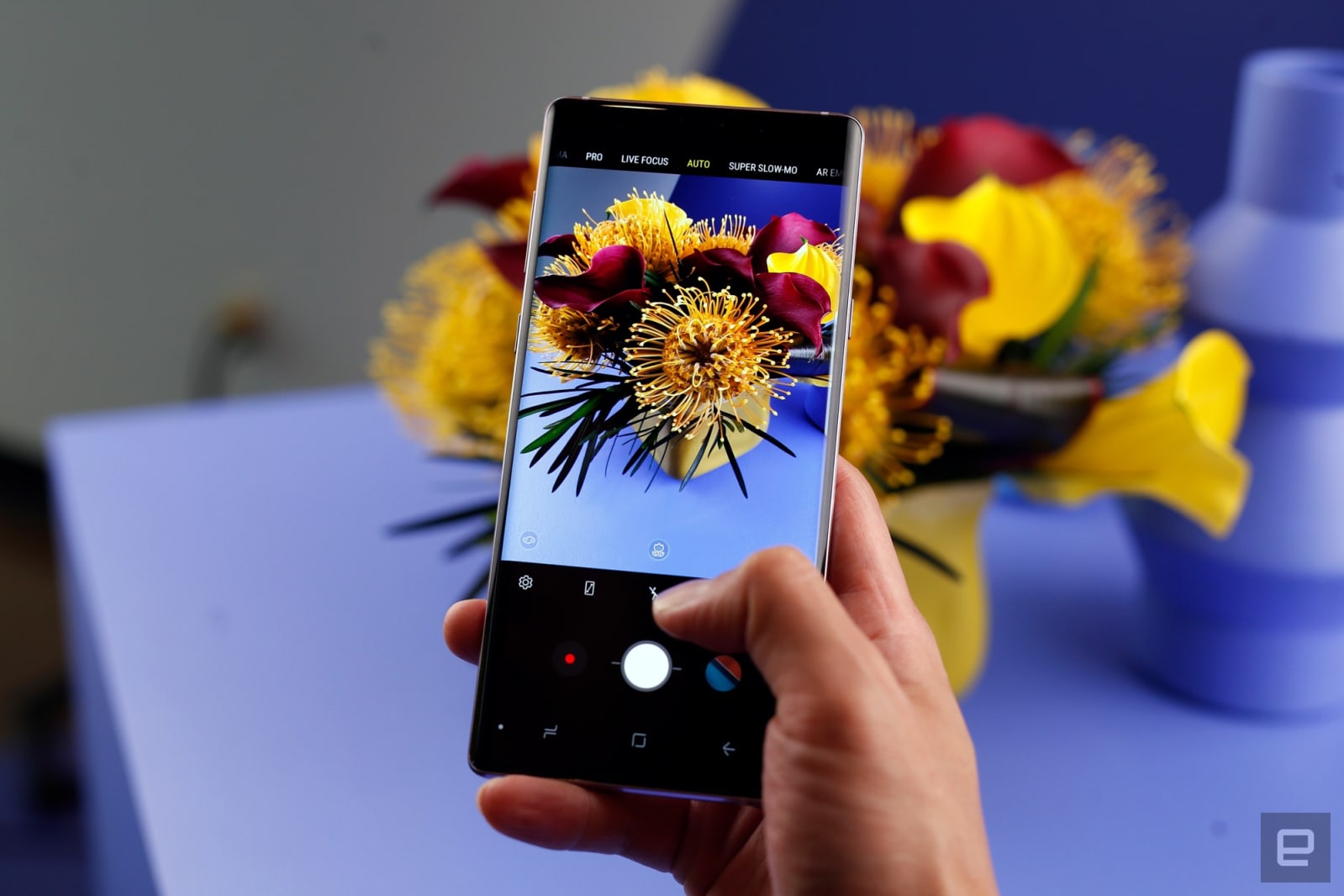 I also had a little help from a new camera feature called "Scene Optimizer." It's basically Samsung's answer to Huawei's and LG's AI photography software, and is enabled by default (you can deactivate it). It works more or less the same way: point your phone at what you want to capture, and the Note 9 will detect what's in the scene, then tweak settings like brightness, white balance and saturation to get you an Instagram-ready image.

Samsung's interface is similar to Huawei's -- a badge appears at the bottom of the viewfinder to show you what the phone recognized, and the edits are instantly applied before you hit the shutter. From what I saw off the demo Note 9, its AI goes for more subtle tweaks than Huawei's, which had a tendency to overdo it on saturation and contrast. Samsung's AI only gently bumped up contrast and saturation for subjects like food and flowers.

The Note 9 also has a new software trick called Flaw Detection, where the camera notices whether your subject blinked, your lens is smudged or your scene is backlit, and prompts you to take another photo. It's similar to what some other phones like the Pixel 2 already do when they suggest you clean your lens, but Samsung takes this a step further. I didn't get to test this very much at the demo, so we'll have to wait and see just how effective it is. 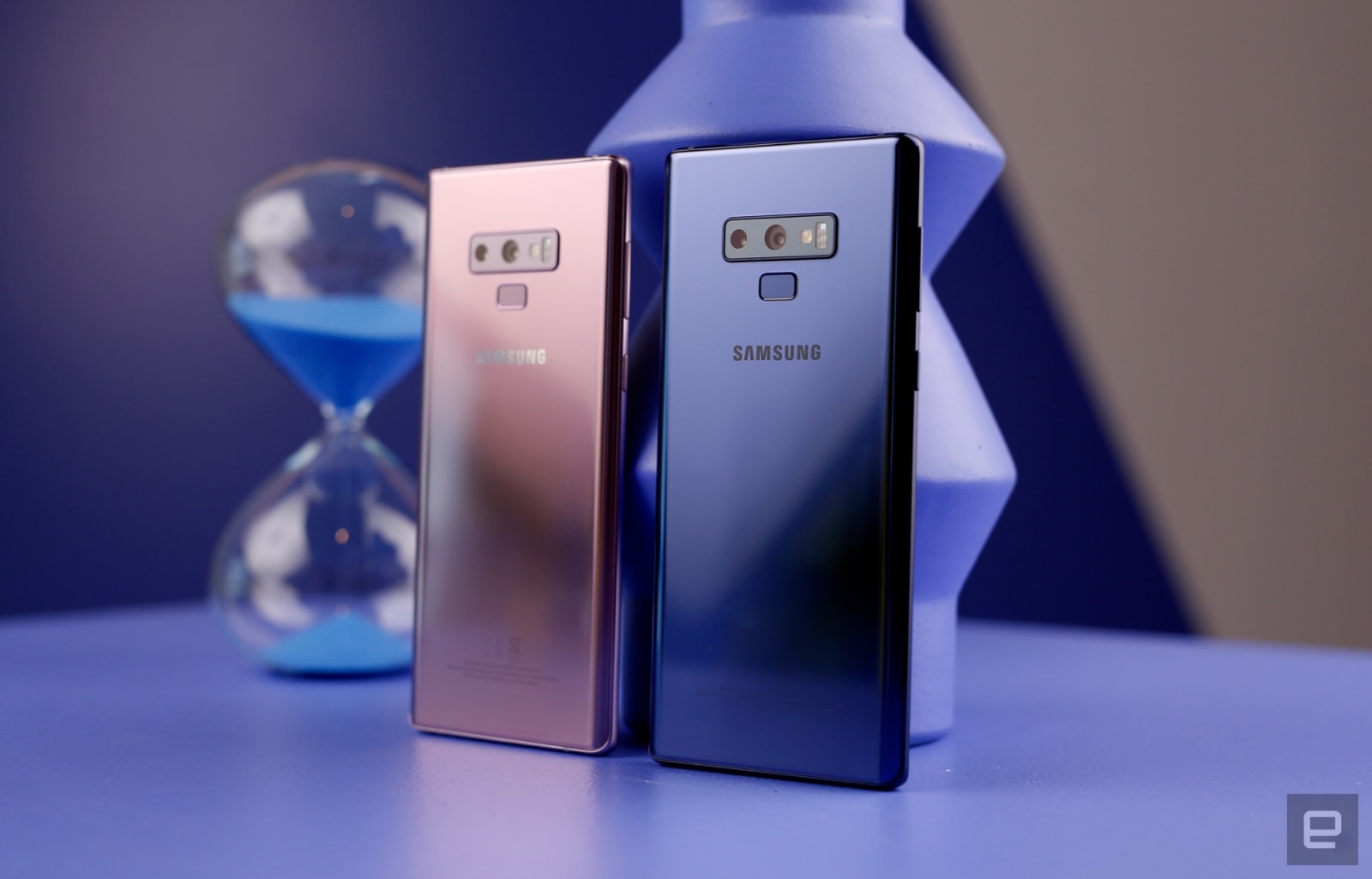 The physical differences between the Note 8 and Note 9 are very subtle. The bottom bezel is almost imperceptibly thinner on the Note 9, making room for its ever-so-slightly larger 6.4-inch screen. On the back, the fingerprint sensor sits below the dual cameras, instead of right next to them. Thank God (or Samsung) for that -- not only is the scanner now easier to reach, but you'll smudge the lenses much less often.

The barely noticeable physical changes are impressive considering Samsung's managed to squeeze a much larger 4,000mAh battery into the Note 9, as well as a new "water carbon" cooling system. Galaxy flagships have used water cooling for awhile now, but the thermal spreader here is three times larger than in the Note 8, making it much better at dissipating heat. Before you freak out about water sloshing around inside your phone, bear in mind we're talking about minuscule amounts of liquid here.

With the thermal improvements, the Note 9 should hold up better under long periods of CPU-intensive work. That sounds promising, but it's not something I got to really test at our brief hands-on. 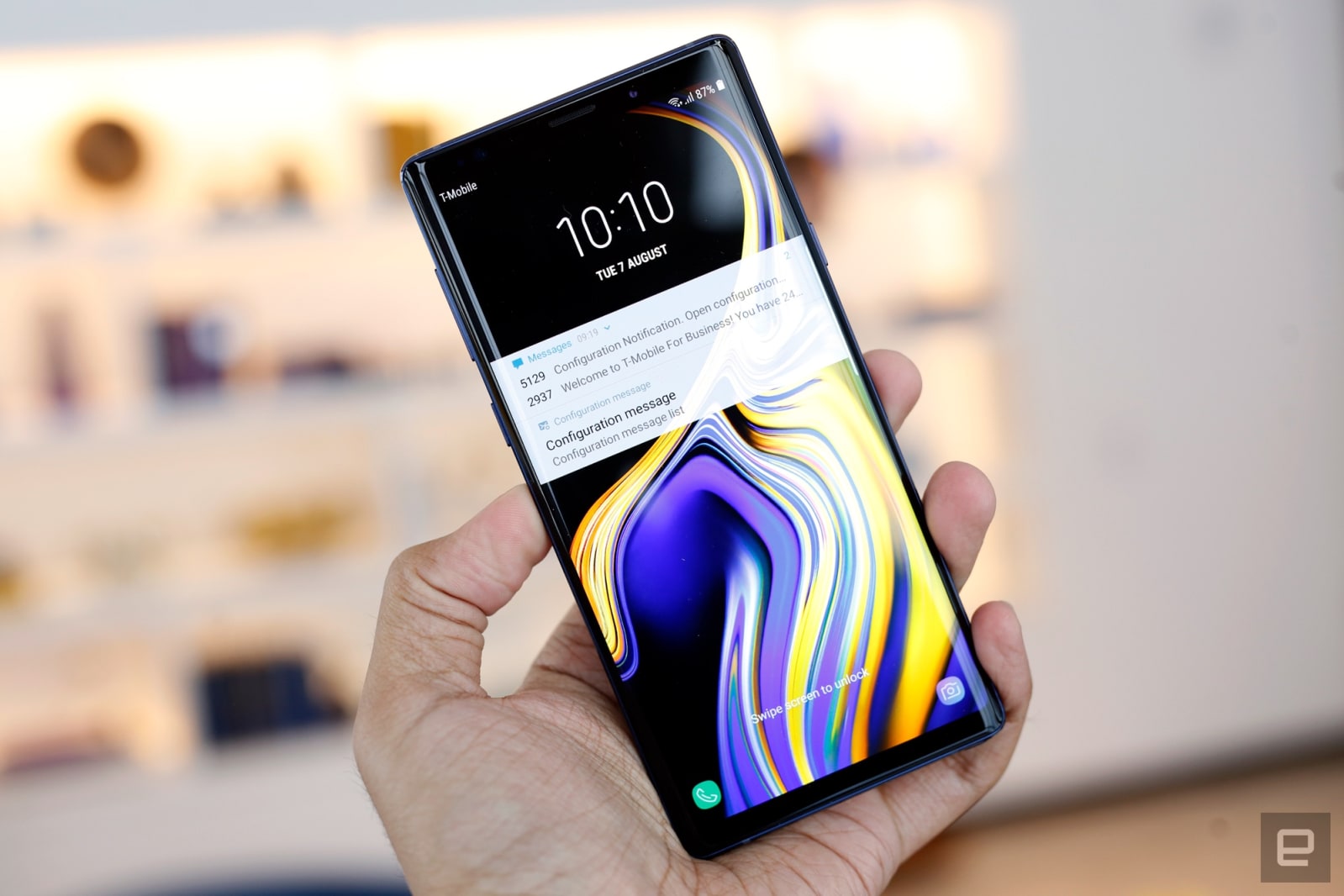 I did find the Note 9 responsive and speedy in launching apps and taking pictures, thanks to its Snapdragon 845 chip. Qualcomm includes its X20 LTE modem on this chipset, which can reach speeds of up to 1.2Gbps on compatible networks, but Samsung claims it tuned the Note 9's radio to be faster than competing phones with the same CPU. But, we'll have to see about that. Another component that Samsung says it tweaked is the Note 9's GPU, which it did to "amp up performance." The company didn't clarify further exactly what this does, whether it's by allowing higher boost speeds or having the cores run faster.

All these performance upgrades are hard to evaluate without a review unit in our hands, but on paper they seem promising. The specs here should already please Note fans, who tend to be power users and are more likely to appreciate things like the doubled storage offerings -- last year's base model came with 64GB of storage, while this year's has 128GB.

This year's version still packs 6GB of RAM, which should come in handy if you try to use the Note 9 as a desktop (for some god forsaken reason). Since the Galaxy S8, Samsung's offered DeX on its flagships, which lets them power desktop setups. In the past, you had to use a separate DeX dock connected to a keyboard, mouse and monitor. With the Note 9, you can simply plug in a bigger screen via an HDMI to USB-C adapter, and DeX mode kicks in, offering a more work-friendly interface with things like resizable windows and a taskbar. Then, the Note 9's screen can act as a trackpad and virtual keyboard. 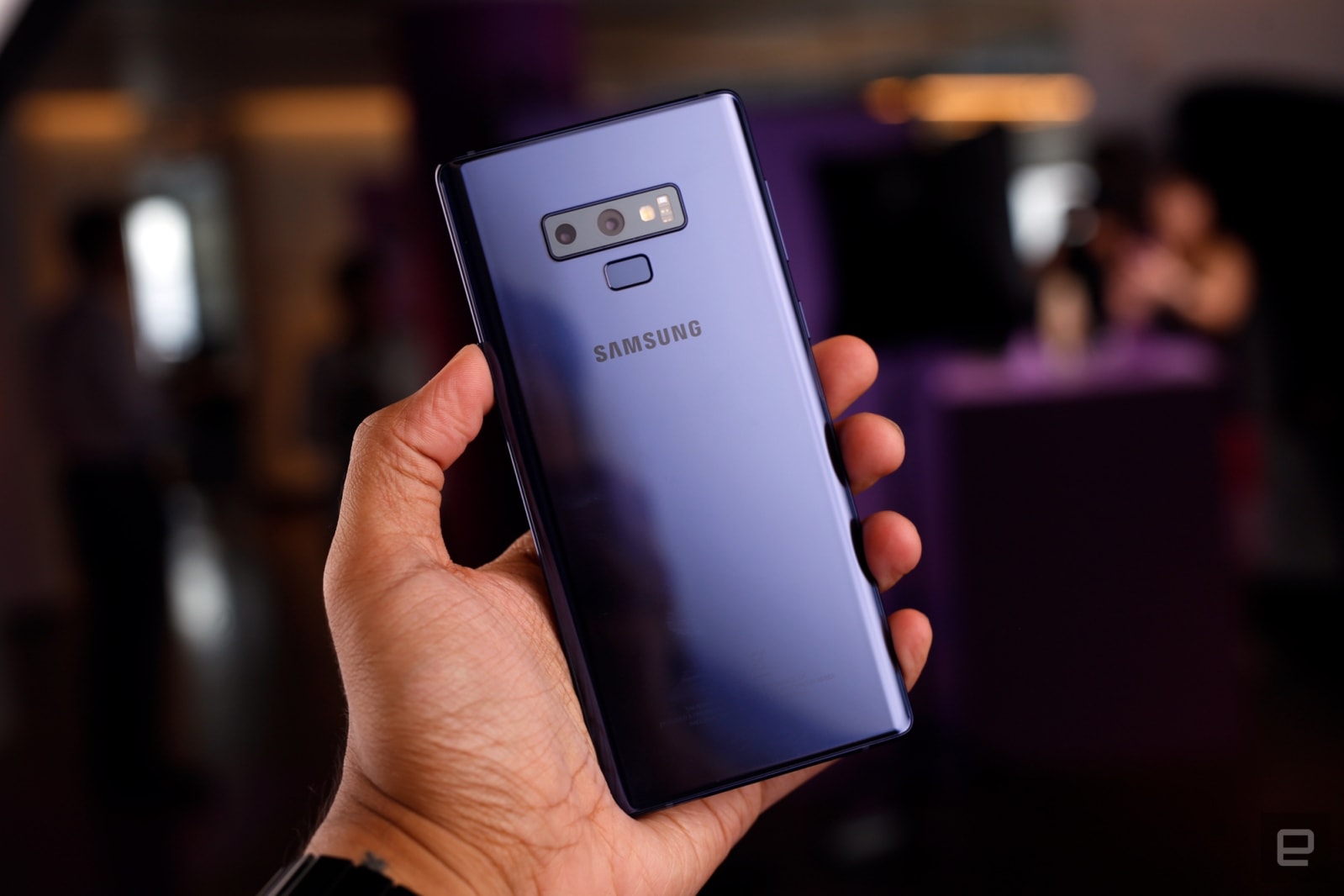 You can still use the Note 9 normally when connected to the screen. The trackpad interface appears to be a standalone app or a widget you can exit and go back to when you needed. This should technically work with any HDMI to USB-C adapter, but Samsung obviously recommends you use its own. Honestly though, DeX mode is finicky and unpredictable in my experience.

Still, it's not a major feature of the Note 9, which I'm pretty impressed with so far. Sure, most of the upgrades are performance bumps, but that's what Note fans want. The new S Pen features are clearly the highlight, and I already know from experience with the S9+ that the cameras will be great. I'd still need to spend more time with the phone before I know how I feel about it, but if you're already sold (without waiting for our full review), you can pre-order the Note 9 tomorrow. The 128GB model will cost $1,000, while a 512GB version is also available for $1,250. Those who pre-order get their choice of either a set of AKG headphones or 15,000 V-bucks in Fortnite for Android (which will be arriving on Galaxy flagships first). Or you could shell out $99 for both. The phone won't officially hit store shelves until August 24th.

All products recommended by Engadget are selected by our editorial team, independent of our parent company. Some of our stories include affiliate links. If you buy something through one of these links, we may earn an affiliate commission. All prices are correct at the time of publishing.
View All Comments
Samsung Galaxy Note 9 hands-on: All about the S Pen