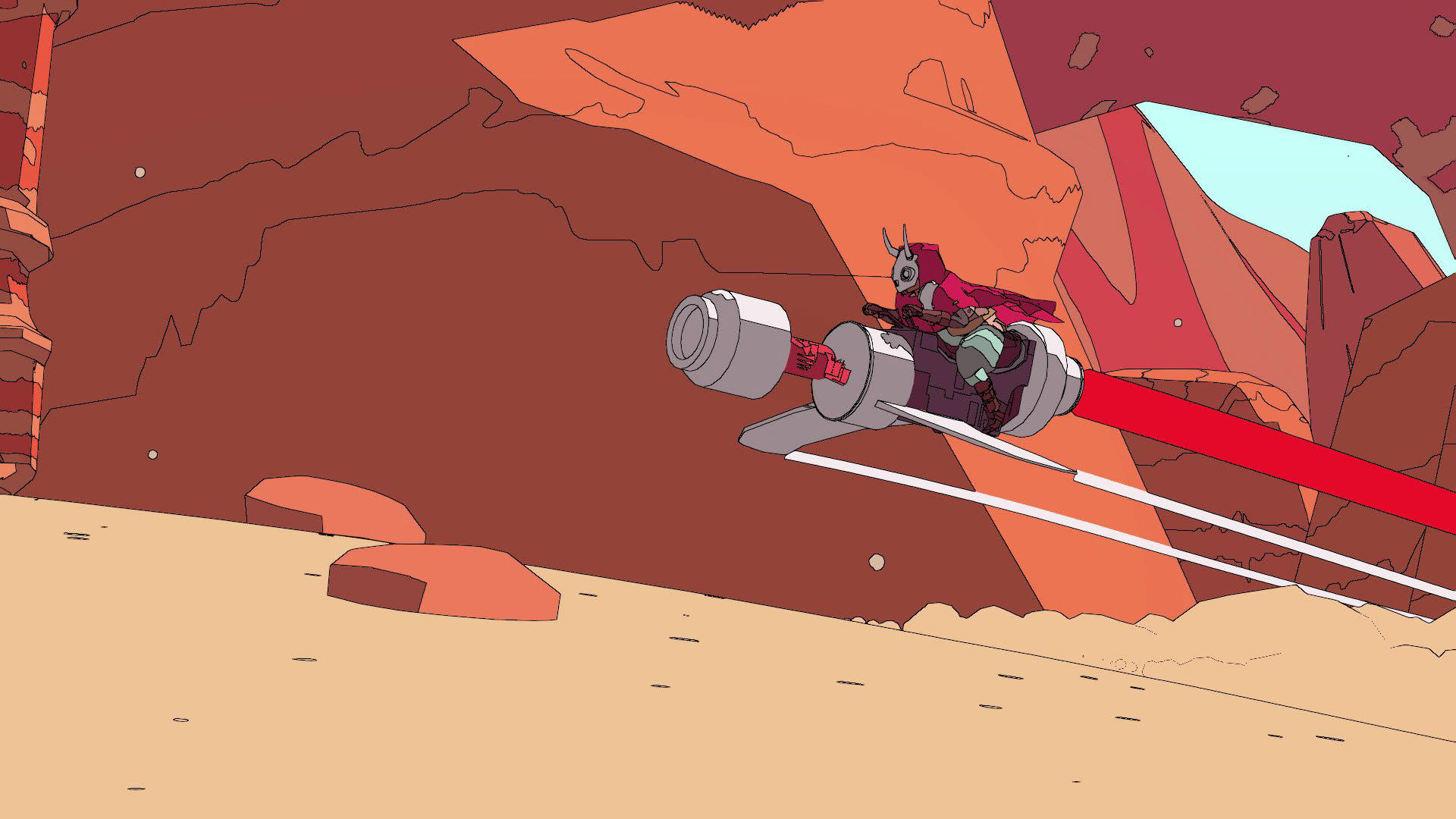 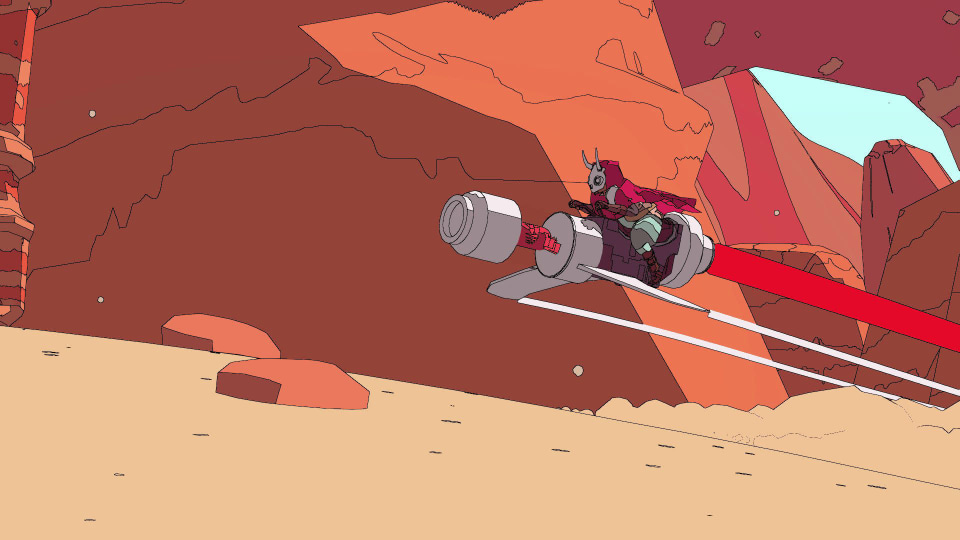 It's been clear that Sable is going to be a very pretty game ever since a few work-in-progress GIFs bounced around Twitter and Tumblr a year or so ago. What hasn't been entirely clear to me is what the game behind those GIFs was going to be. It turns out that it's as ambitious as it is gorgeous.

Developed by Shedworks, an aptly-named two-man team working out of a shed in London, Sable immediately draws comparison with the work of French illustrator Moebius or Tintin creator Hergé: Clean lines and broad blocks of color are given texture by sparse dot shading. Far from cloning or pastiching the style, though, Sable has its own character, and at times evokes classic anime series and films more than its oft-repeated Franco-Belgian inspiration.

It's hard not to marvel at the game in motion. Rolling sand dunes extend to the horizon, with mountains and strange structures dotted around the otherwise barren world. As the protagonist moves around this landscape, it's easy to forget you're looking at a game, rather than an cartoon. Shedworks has purposefully animated the characters in the world at a lower frame rate than the game itself, which helps sell the illusion that Sable is a carefully crafted cel animation, rather than a 3D game.

Sable is named for its protagonist, an adolescent girl from a desert village, on a journey of self-discovery. In this world, which, without trying to pigeonhole it further, feels like a light post-apocalyptic fantasy. everyone wears a mask that tells people who they are. As children approach adulthood, they leave their homes to decide what mask they want to wear, or, in more relatable terms, who they want to be. Sable isn't uniquely gifted, or destined to be a hero -- she's just searching for her place in the world.

The overarching narrative, then, is about this literal and figurative journey. What you do on your way to finding yourself is up to you. The world is there to explore and discover, and within it, there are plenty of villages, ruins and people to see. Every adult Sable will come across, of course, has gone on their own journey, and has their own story to tell. They might ask you to do something for them, or simply tell you a tale. As the developers tell it, almost everything in the game is optional -- who you see, what you do and the choices you eventually make for Sable are down to you.

Although its "go anywhere, do anything" mantra shares much with games like No Man's Sky or even Minecraft, the game won't offer a procedurally generated sandbox, but rather a carefully crafted world. In that way, it's easier to compare it to Nintendo's Breath of the Wild. That basic loop of climbing to high ground (you can basically scale anything, provided your stamina bar doesn't empty), searching for a new landmark on the horizon and making your way there is very much at play here. In place of horses, though, Sable has a customizable hoverbike to help her traverse long distances.

Freedom, exploration and story are everything in Sable. There's no combat, no survival mechanics -- no threat at all. There may be consequences to your actions, though. Perhaps you'll be shunned by a village, and unable to communicate with them, making what already feels like a lonely adventure even more isolating. Overall the game has few mechanics, rewards or gameplay loops. Instead, players need to connect with Sable, her story and the world they've built.

Of course, the visuals will draw people in, but if the story isn't compelling, then everything falls apart. To that end, Shedworks has enlisted Meg Jayanth, the writer behind 80 Days, to work on the plot. The Steampunky mobile game received both BAFTA and IGF nominations for its choose-your-own-adventure story, and remains a favorite of mine, so I have high hopes that the team can pull it off.

But that's where the ambition comes in. Relying on players to engage with narrative, and narrative alone, is risky. With no progression, combat or heroic arc, Sable is a big bet that players will get wrapped up in the world Shedworks is creating, and find the motivation to forge their own path. We'll find out if that bet was successful next year, as Sable is currently scheduled for release in late 2019.

In this article: av, gamescom, gamescom2018, gaming, hands-on, megjayanth, microsoft, sable, shedworks
All products recommended by Engadget are selected by our editorial team, independent of our parent company. Some of our stories include affiliate links. If you buy something through one of these links, we may earn an affiliate commission.