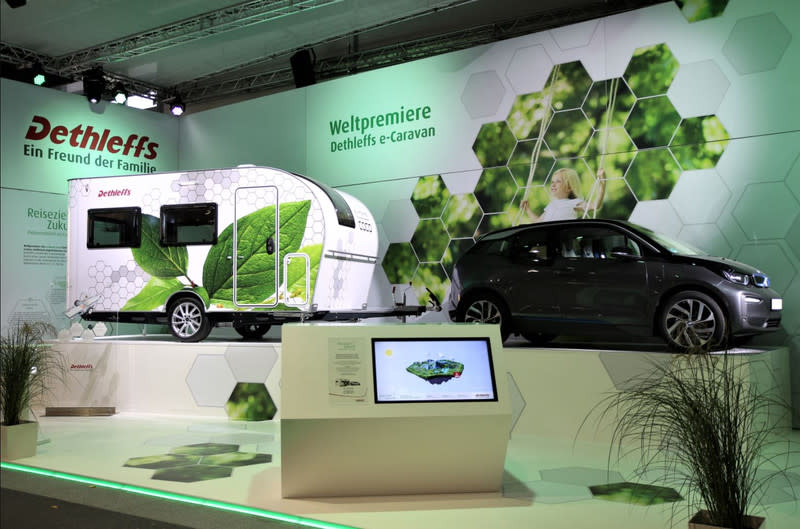 German automaker Dethleffs introduced the E.Home last year, an all-electric motorhome wrapped in solar panels. The company recently gave its cozy Coco camper-trailer the EV treatment as part of a new concept, adding an electric drive to reduce towing demands. This is powered by an 80-kWh battery in the caravan's floor, which is recharged by rooftop solar panels, effectively turning the trailer into a mobile -- and quiet -- power station once it's set up at camp.

Obviously, having a trailer take on some of the towing burden sounds like a positive, sustainable step. But the E.Home Coco doesn't just put in token effort. Each of its dual motors can produce 347 foot-pounds of torque. According to Dethleffs' example, the towing vehicle isn't hauling 2,000 pounds of trailer, it's pulling perhaps 220 pounds.

As New Atlas pointed out, that means smaller vehicles with less torque and towing capacity could take the E.Home Coco out, and do it for farther ranges. Plus, once you get into camp, the electric motors let the caravan park itself via a paired smartphone app. Once situated, the trailer's battery can power devices, AC, appliances and so on. The E.Home Coco can conceivably even be linked up to your home power grid to use its battery as a backup. While it's only a concept, it shows that Dethleffs is thinking about how its next recreational vehicles might integrate sustainable technologies.

In this article: camper, Caravan, Dethleffs, green, recreation, trailer, transportation
All products recommended by Engadget are selected by our editorial team, independent of our parent company. Some of our stories include affiliate links. If you buy something through one of these links, we may earn an affiliate commission.