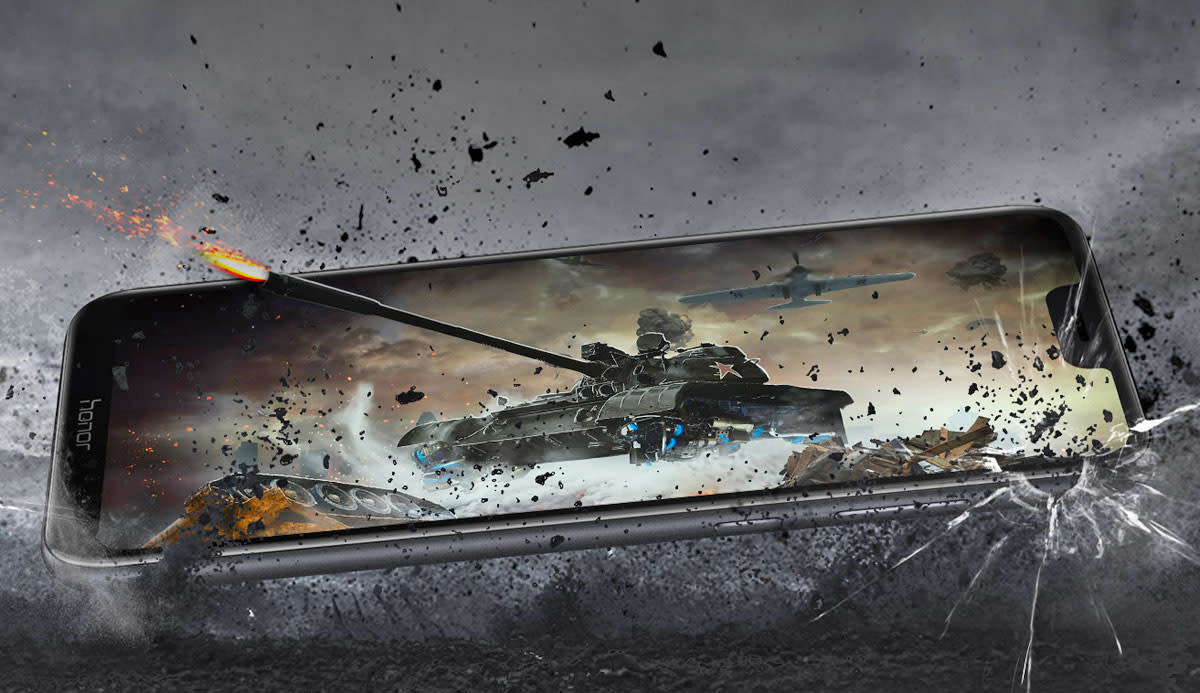 Honor, a spin-off brand from Huawei, makes decent middleweight smartphones that are often, well, kind-of unremarkable. This time is different. Honor is going after a specific smartphone audience: The mobile gamer -- especially if you're into PUBG Mobile. The Honor Play was officially unveiled at IFA today, and all the major features are aggressively aimed at gamers. While there are no plans for a US release, the Play is priced keenly enough, at 329 euros (roughly $380) that, heck, some mobile gamers might even bite.

The most crucial feature could be GPU Turbo. According to Honor, this will "boost the operating system" and "extend battery usage." Quite how it will do that isn't clear -- Honor says it's "hardware-software integration" -- but it's all aimed at optimizing how you play on your phone. The company claims its graphics processing is 60 percent more efficient than competitors, reducing energy consumption by up to 30 percent. This should lead to "almost full frame rates" and more stability as you hammer the Play with the likes of PUBG Mobile. (GPU Turbo will also be coming to Honor's most recent family of phones in the coming months.)

Behind it all, there's the Huawei Kirin 970 chip, a potent but increasingly-old processor that's powered Huawei's recent major phones like the P20 Pro. There's also ample RAM (4GB) and 64GB of storage from the get-go. Honor also claims that its ultra power saving mode on the Play is capable enough to squeeze out a full season of a TV show bingeing on just one charge -- pretty impressive for a 3,750mAh battery.

Beyond the processor and power management, the Play packs in an AI 3D surround sound feature -- but only for PUBG Mobile, Asphalt 9 and Mobile Legends. A more notable audio spec is the inclusion of 3.5mm headphone ports -- it's an increasing rarity among new phones.

Like the vibration feature on Sony's Xperia XZ2 -- which struggled to offer a relevant use for it-- the Honor Play's "4D Smart Shock" will transmit rich vibration feedback to players, specific to what's happening in-game. For now, only PUBG Mobile is supported, but the breadth is impressive, running the gamut from single fire through burst fire, grenade explosions, injuries, shotguns, sniper shots and more.

The rest of the phone sounds capable but not earth-shattering. The dual-lens camera on the back is made of a single 16-megapixel, f/2.0 camera with a secondary depth-sensing 2-megapixel sensor -- just like the Honor 7X. The Play also borrows AI imaging skills from the Honor stable, which reduces camera shake, improves low-light performance and adds a handful of AI-boosted photo modes dependent on what you're shooting.

The Play claims to be a phone for gamers, but it's one for mobile gamers. A lot of the features would entice me more if they were available in more games. Android has an increasingly rich catalog of games -- PUBG and Asphalt 9 are just a part of that. Crucially, perhaps, the phone is pitched at a price that makes the package much more tempting. For now, we'll have to wait and see if there are enough performance-hungry mobile gamers looking for a smartphone replacement.

No word on a US release, but the Honor Play, priced at 329 euros (£279) will be coming to Europe on August 30th, launching in the UK, France, Germany, Italy and Spain, as well as the Middle East, Russia, India and the Asia-Pacific region.

In this article: gaming, gear, honor, honorplay, huawei, ifa, ifa2018, mobile, play, pubg
All products recommended by Engadget are selected by our editorial team, independent of our parent company. Some of our stories include affiliate links. If you buy something through one of these links, we may earn an affiliate commission.