Last year, Lenovo surprised us with a novel concept. What if there was a laptop the size of a tablet with a touch-sensitive surface in place of a keyboard? That notion birthed the Yoga Book, a tablet-digitizer hybrid that had a 10-inch display on one side and a smooth, flat surface facing it. Long story short, we were excited about the premise, but ultimately disappointed by the terrible typing experience on what the company called its Halo keyboard.

So forgive me for being a bit apprehensive about Lenovo's second attempt. The company is launching the new Yoga Book C930 here at IFA 2018, which replaces the touch-sensitive panel with an e-ink display. This gives it far more functionality than its predecessor in addition to just being a keyboard replacement. The company also (thankfully) ditched a feature from the original that let you write on paper atop the Halo keyboard and have it show up in the OS, which was interesting but often unwieldy. From my experience with a demo unit, the Yoga Book C930 appears to be a good attempt from Lenovo at trimming some fat and adding useful tools, but it still feels like a novelty.

But first, that new e-ink screen. The first thing it can do is pretend to be a keyboard. It'll show black-and-white keys that "depress" when touched, and the device vibrates to provide haptic feedback. There's also a touchpad that hides until you press a button to use it, and it appears over the space bar. The whole experience still felt surreal, and didn't seem like a reliable solution to get serious typing done, but it's certainly an improvement over the original Halo keyboard, which doesn't even have the decency to fake a depression. 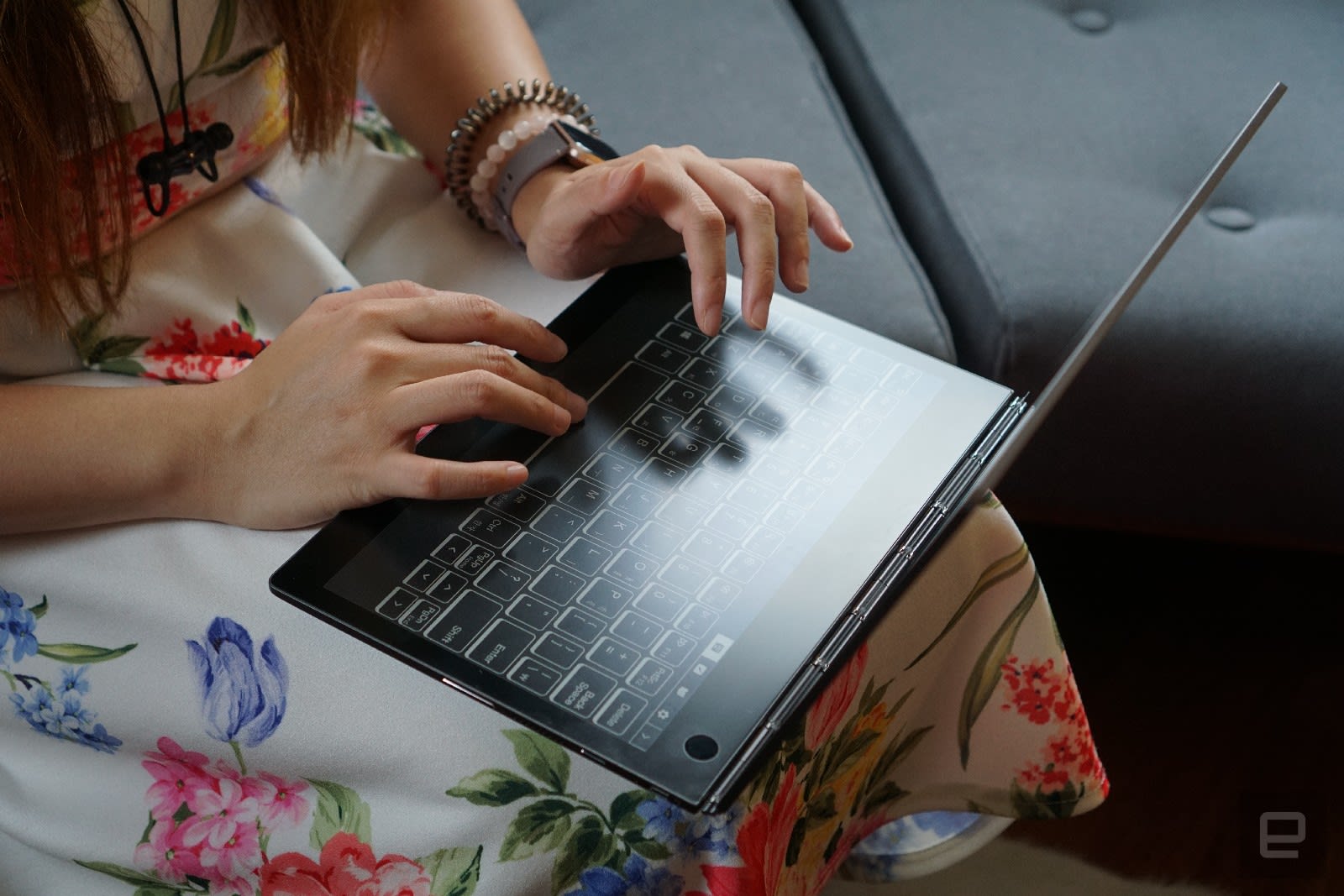 I didn't spend too much time typing on the Yoga Book C930, because there was more the e-ink panel could do. Lenovo may have ditched the paper integration from the original device, but it will still let people take handwritten notes on the new Book.

Tap the function button on the top right, and the e-ink screen switches over to a notepad mode. You can write on the screen with an included stylus, and the system will not only save your sketches, but also translate them into text that you can copy and paste over into the primary display. I scrawled the nonsensical phrase "Engadget hello!" on the e-ink slate and pressed a key to convert it into text. The Yoga Book accurately interpreted my handwriting, showing the phrase in a little window on the main screen. I then copied and pasted it over to a PowerPoint slide. Pretty nifty.

Of all the things the Yoga Book's e-ink screen can do, the most useful is its new e-reader talents. You can load up PDF documents and read them on the black-and-white screen even when the rest of the Yoga Book is asleep, which will last longer than typical full-color tablets. For now, it doesn't support popular eBook formats like .epub and .mobi, though the company said it's adding compatibility for those and text files early next year. Gestures like pinch to zoom worked on my demo unit, but I noticed some lag.

I'm curious to see how the Yoga Book C930 will perform in the real world, considering the past attempts (and complete failures) of previous e-ink phone and case companies. I'm sure the Yotaphone makers have some stories to tell. 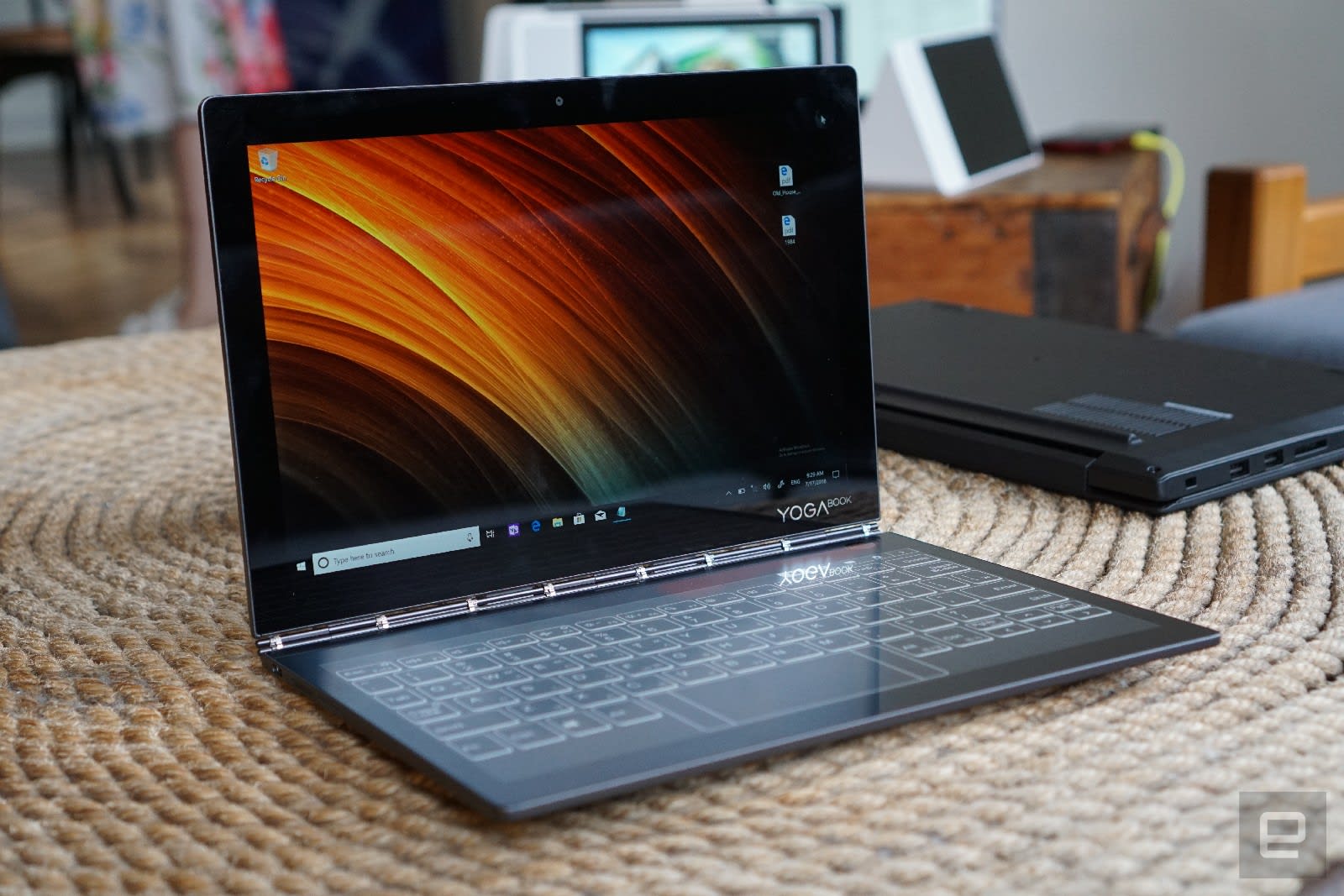 A competent tablet on the other side

That delay is most likely a result of the e-ink screen refreshing itself slower than I'm used to on full-color touchscreens rather than processor incompetence. The Yoga Book is outfitted with seventh-generation Intel Core i5 or m3 cards with integrated HD 615 graphics, which should be powerful enough if you're not planning on hardcore gaming. The 10.8-inch tablet was responsive during my hands-on, running Windows 10 apps smoothly. The Yoga Book doesn't come in Android or Chrome OS flavors like its predecessor does, though I wouldn't be surprised if Lenovo eventually offers those. The color LCD screen runs at a 2,560 x 1,600 resolution while its e-ink counterpart comes in Full HD, Lenovo estimates you'll get 8.6 hours of battery life.

I still dig the Yoga Book's compact design -- it's impressively thin and light for being basically two devices in one. There's a fun new feature where the device pops open if you knock on the top lid twice, making it slightly easier to fully unfold, too. I also applaud Lenovo for continuing to work on and improve the Yoga Book series despite generally critical reviews at first.

But with a third-generation device already announced, the Yoga Book C930 is outdated before it even hits shelves in October. And at a starting price of $1,000, there's a high risk of buyers' remorse. The dual-screen Yoga Book still seems about a year away, though. If you simply must have this e-ink-full-color-tablet-on-tablet mashup or like the idea of an e-reader that also has a color companion, by all means, spend your $1,000 on the new Yoga Book. As much as I'd like to encourage Lenovo's efforts, I'm holding out (and saving up) for the next-gen version.