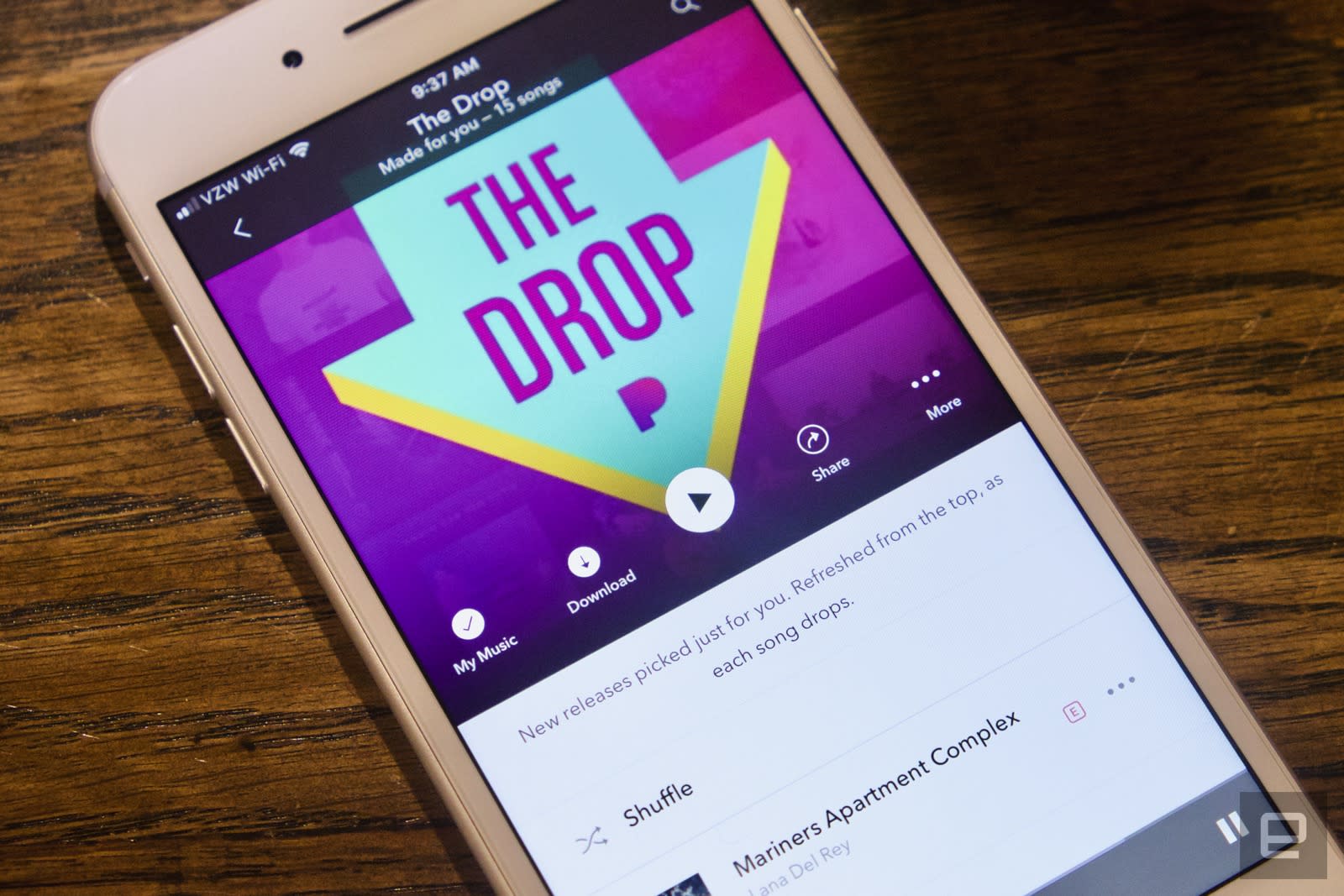 If you ask Spotify users why they're loyal to the music service, chances are many of them will cite personalized new music playlists like Discover Weekly and New Release Radar. Today, Pandora is releasing a similar playlist for its Premium on-demand users: it's called "The Drop," and it's a custom playlist that features newly-released tracks selected based on a user's listening history over time. Pandora says the playlist will automatically show up in Premium users' libraries with around a dozen songs to start with, but it'll be continuously updated over time as new songs are released.

It's not quite as comprehensive as the 30 songs Spotify adds to New Release Radar playlists every week, but The Drop playlist, but that's partially because Pandora's playlist doesn't fully refresh on Fridays, Instead, it keeps all the previous songs and simply adds the latest to the very top of the playlist. Eventually, the playlist will include up to 100 songs, all listed in order of their release.

I got to check out The Drop a week early; my playlist initially populated with 10 songs culled from releases from the past few weeks. The playlist then grew to 15 this past Friday, the day most new music is typically released. While it's a relatively small playlist, all the songs matched up with my interests -- there were a handful of songs from artists I wasn't familiar with, but most were from bands and singers that I followed or listened to on at least a semi-regular basis. I wouldn't mind more diversity, but to be fair I've only given Pandora so much data to work with (I use Pandora occasionally, but it doesn't have as much info on my listening habits as some other music services.)

This isn't the first effort Pandora has made recently to tailor its Premium service to users' tastes. Earlier this year, Pandora started rolling out personal playlists based on genres and moods, specifically tailored to individual users. But users are always going to want an easy way to find new music; as such, it's easy to imagine The Drop quickly gaining traction with Pandora subscribers. Pandora says the playlist will show up for users today -- if you don't see it in your library, the company says it'll arrive once you've listened to enough music on Premium for Pandora to build it.

In this article: entertainment, Pandora, PandoraPremium, Personalized, playlists, services, TheDrop
All products recommended by Engadget are selected by our editorial team, independent of our parent company. Some of our stories include affiliate links. If you buy something through one of these links, we may earn an affiliate commission.