Audi rips the camouflage off its E-Tron electric SUV

Audi finally took the wraps off its E-Tron pure electric SUV. At an event in Northern California, the automaker stripped off the QR code-esque wrap from the vehicle and announced how you can reserve your own and for how much.

Audi says that in 90 percent of typical driving the electronic system will slow the car without the friction brakes. The system will work at up to 0.3 g (G-forces. One equals the gravitational pull of the Earth). Anything more than that and the friction brakes are ready to take over nearly instantaneously, according to Audi.

Audi says that its researchers have determined that the braking system (which is also 30 percent lighter than a typical brake system) can be responsible for up to 30 percent of the vehicle's range in optimal conditions.

When the two motors aren't bringing the car to a stop, they can propel it from zero to 60 in 5.5 seconds in boost mode. Regular mode will get the car up to 60 in 6.6 seconds. The motors are powered by a 95 kWh battery pack that's populated with 4323 cells in 96 modules. In boost mode, it puts out 300 kW of power and 664 Nm of torque. That's roughly 400 horsepower and 489 foot-pounds of torque, although Audi says the final US spec numbers aren't available yet. The battery supports up to 150kW DC fast charging and will charge from zero to 80 percent in 30 minutes (For comparison: The I-Pace on a 100kW charger will go from zero to 80 percent in 40 minutes). Owners will get 1,000kW of free charging (a bit more than 10 free charge ups from zero to 100 percent although most people rarely go from dead zero to 100 percent at a station) from Electrify America (a subsidiary of Volkswagen America the parent company of Audi) over four years. If you've never heard of this charging company, you're not alone. But the company is expected to open 484 stations in the United States by the end of 2019. So fingers crossed if you buy an E-Tron they open one up near you.

Inside, the E-Tron has the latest version of Audi's dual display MMI along with an interior that's badged with the E-Tron logo with gold accents. Fancy. Audi also wants to sell the car with side-mirror cameras instead of actual mirrors. In addition to being cool looking, they cut down on wind resistance. Unfortunately, US regulations prohibit Audi from offering them in the United States. So we're stuck with regular side mirrors. Audi will be delivering an E-Tron to NHTSA (National Highway Transportation Safety Administration) to test the side camera solution but can't say if or when the agency will allow the tech on US roads. Sort of like the Matrix Lights that are unavailable in this country.

Audi will also offer short-term subscriptions for some of the E-Tron's features. For example, if you never use adaptive cruise control in your normal commute, but you have a very long drive coming up, you can "rent" it and have it added to the vehicle for a predetermined amount of time. The same can be done with the Matrix lights (in regions where they are allowed). Like the other Audi vehicles like the A7, the Matrix hardware will be on the car, it's just a matter of turning it on. For folks that want to test drive a feature before committing to it, it's a nice way to try something out before dropping cash on it. The automaker also announced that, in the future, the E-Tron and its chargers will be updated to support sharing energy with the grid. For example, if your SUV is connected to the charger instead the power company spinning up an additional power station, the E-Tron along with other electric vehicles that support the function could sell energy back to the system. No word on when that'll go live.

There are also some things we didn't learn, like the range based on EPA estimates. Audi says that the E-Tron will get over 400 kilometers (248.5 miles) using the Worldwide Harmonized Light Vehicle Test Procedure (WLTP). The EPA method is more stringent, but once the official numbers come in (the vehicle is being tested now), we're guessing at least over 200 miles of range. The horsepower and torque specs are also not finalized (as noted above). Those details should be available when the SUV gets closer to being delivered which should be in the second quarter of 2019. 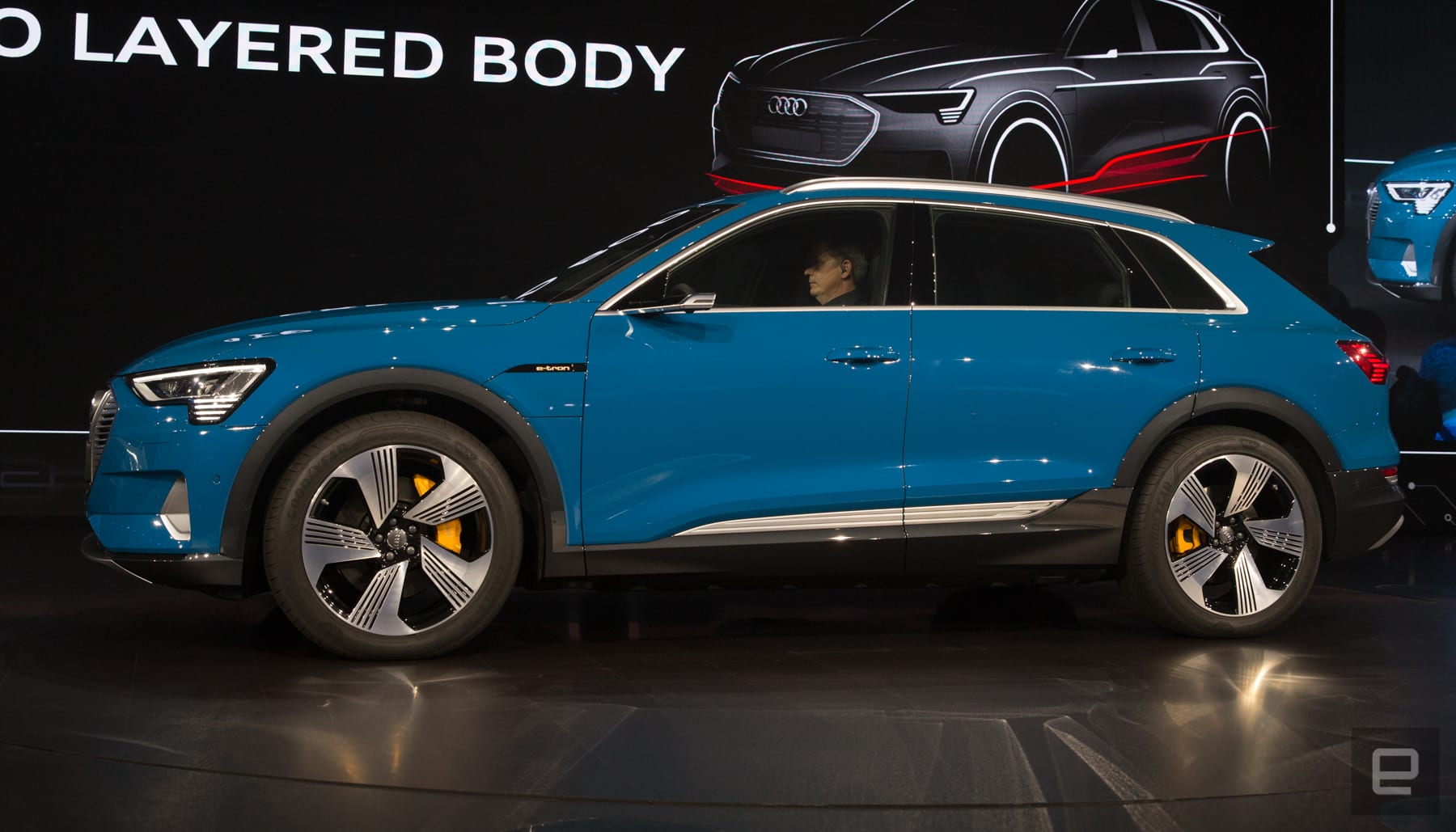 If you're itching for an electric Audi, you can place a reservation now with a fully refundable $1,000 deposit. If you're looking to splurge, you can get one of the $86,700 First Edition models. Only 999 will be sold and will have fancy orange accents inside and 21-inch wheels. Once we get some time behind the wheel, we'll be better able to determine how well it stacks up against the I-Pace and Model X.