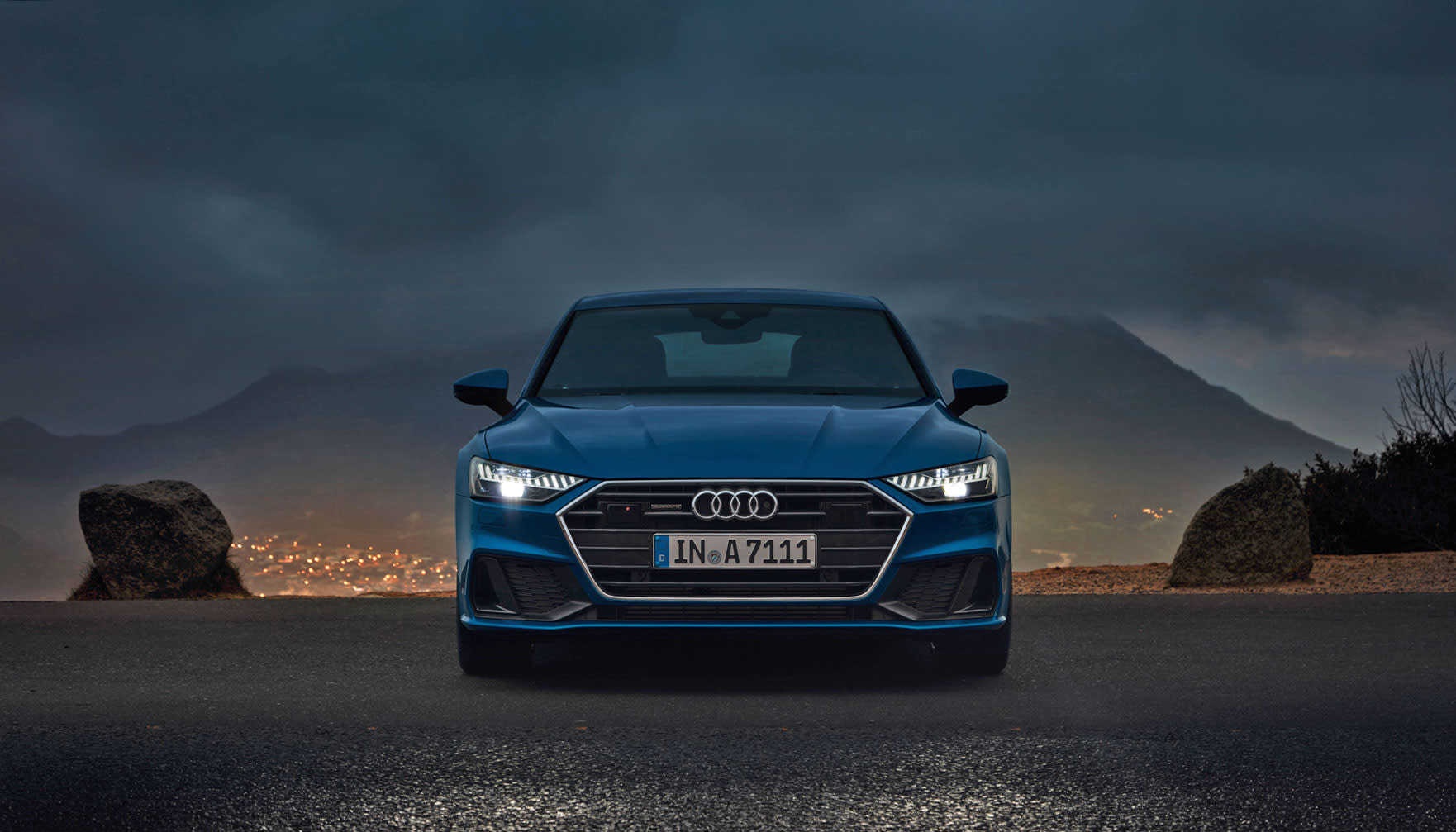 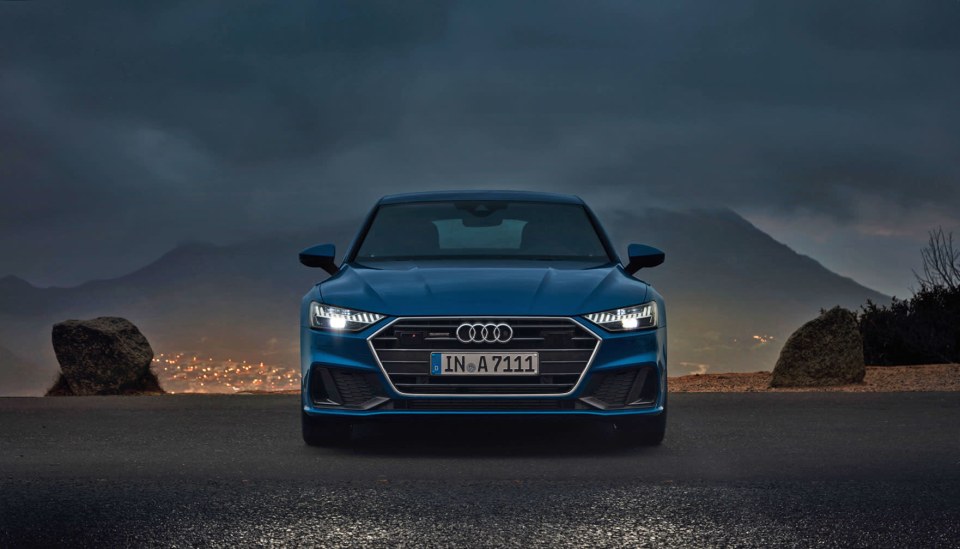 Headlights typically serve one purpose -- helping drivers see the road. To illuminate the asphalt at night the lights traditionally had two settings. Low beams for driving around town and passing other vehicles or high beams for seeing more of the road and surrounding area. That's pretty much all we've had for decades. While cars in the United States still operate like this, in other parts of the world -- thanks to technology -- lights have evolved.

Currently, on your US-spec car there are the usual two high/low beam options coming out of two bulbs usually housed in the same element. There are better systems out there. For example, Audi's new HD Matrix LED with Audi Laser light.

Our headlights are pretty dumb. Sure, your car can automatically toggle the high beams on and off based on oncoming traffic, and some cars even offer the ability to turn the lights when you go around the corner. Meanwhile, Audi, Mercedes and other automakers have cars in Europe with ADB (adaptive driving beam) lighting, which reduces the glare for oncoming cars while giving drivers a brighter driving environment.

Audi's HD Matrix LED lights are pretty much what the name implies. They're throwing a brighter, cleaner light onto the road than traditional bulbs can. Instead of one (or two) light elements, each headlight is a matrix of 32 individually controlled LEDs. These tiny lights can be turned off independently of one another and support 64 stages of dimming.

By using a bunch of little lights, each headlight can adjust how much illumination is thrown and create segments within that projection where the light is dimmer or brighter. So if the windshield-mounted camera detects an oncoming car, the Audi can dim the light hitting that vehicle. The Audi can track that vehicle with the camera and adjust the lighting accordingly. It's basically creating a moving mask of lower intensity light onto the oncoming vehicle while the driver in the Audi still gets the benefit of bright LEDs everywhere else on the road.

It's an impressive system that took years to develop.

"We were discussing LED lights, and our competitors told me, 'Why are you dealing with LEDs? It's too expensive. It's too early. It'll take 10 years before you get it into production and it's cost-competitive.'" Stephan Berlitz, Audi's head of lighting development, said while we stood in Audi's light tunnel at its Ingolstadt, Germany, headquarters. He noted that it did indeed take 10 years for LEDs to make sense in cars. "But you couldn't get here if you didn't do anything the 10 years before."

Berlitz said the idea for headlights that can be dimmed and brightened in segments came out of its night-vision department. The project manager working on night vision for Audi asked Berlitz if they could create segments from LEDs for light and use the night-vision camera to detect oncoming cars. "It was a crazy idea," Berlitz said. It didn't help that suppliers told Berlitz that it wouldn't work and it was "against physics." "No, it's not against physics. It must work, and we found a solution," Berlitz said.

To find that solution the company even got funding from the German government to make these individually addressable LEDs possible. Building a lighting system that works and is cost-competitive is a long, tough road. Even tougher is dealing with regulatory bodies. In the United States, that's NHTSA (National Highway Traffic Safety Administration), and it's this government body that's been slow to give automakers like Audi the go-ahead to put next-generation lighting systems on cars sold in the US.

NHTSA's main concern is safety. The government body is responsible for recalls and making sure automakers don't put dangerous features or technology into cars that could put drivers, passengers and other people on the road in danger. It's an important job. But its approach to ADB lighting has been possibly a bit too cautious.

During a 2015 study of these types of lights (initiated by Toyota), the department concluded:

In many cases, ADB illuminance levels exceeded that of lower beam mode in the location of other vehicles. In most cases, the ADB systems tested consistently produced the same or greater glare than the lower beam of that vehicle.

That makes it seem like all the test vehicles produced too much light all the time. In reality, the instances during controlled laboratory tests in which the lights produced more glare than a typical low beam from all vehicles were at intersections and some curve maneuvers. Overall, most of the systems worked most of the time. But it wasn't enough to change the rules. Still, automakers continue to try to get the rules changed.

Berlitz said he's met regularly with NHTSA to tell the agency what Audi is working on right now and what it's researching for the future. Those meetings with the technical team go well, but there's the regulatory portion of agency and they've been slow, which can be frustrating for automakers and car buyers who know there's something better and safer out there.

Fortunately, NHTSA has been listening. When contacted about ADB systems the agency sent Engadget the following statement:

NHTSA has no greater priority than the safety of the motoring public. The agency is currently working on a rulemaking that would amend the lighting standard to permit an advanced head lighting system known as an adaptive driving beam (ADB) system as optional equipment.

NHTSA is working to at least talk about amending the rule. That's a start. Audi has already tackled one of the issues from the NHTSA research in 2015. In automatic mode, the high beams are turned off while in city limits and when the car is going slower than 18.6 miles per hour. No more blinding people at stop signs.

If the rules are changed to allow ADB lights, Audi A7 owners in the US will be happy to know that the Matrix technology hardware is ready to go in their cars. It's turned off now, but once Audi gets the go ahead, it's ready to be turned on at the dealer's.

"Our job has always been to project ourselves into the future," Cesar Muntada, Audi's head of lighting design, said. That future of brighter safer lights is already here. Now we just need the government to let us flip the switch.

In this article: Audi, audilaserlights, business, design, gadgetry, gadgets, gear, laser, led, ledights, matrix, matrixledlights, tomorrow, transportation
All products recommended by Engadget are selected by our editorial team, independent of our parent company. Some of our stories include affiliate links. If you buy something through one of these links, we may earn an affiliate commission.