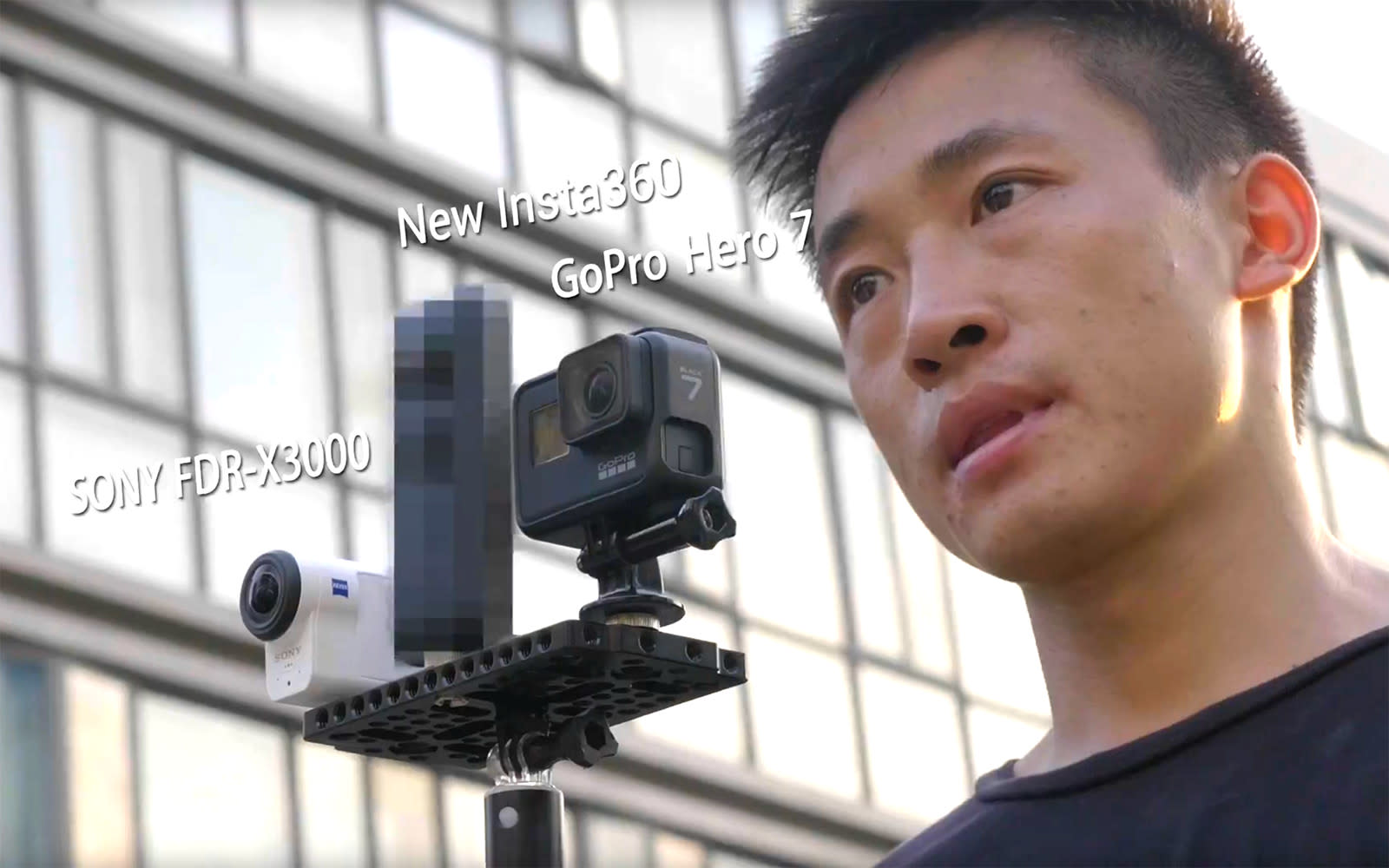 With the Insta360 One marking its first anniversary earlier this month, it's no surprise that the company is preparing a follow-up model to this standalone 4K 360 camera. But first, we have a teaser (as usual). From afar, the first video appears to be yet another sample that shows off "FlowState" video stabilization combined with slow motion and FreeCapture editing, so nothing new in that sense.

What actually caught my attention were two brief moments when the camera operator's shadow gave the game away -- that person was throwing the camera, as opposed to waving it around on a selfie stick. Later on, you can also just about see another person holding an upside-down umbrella for catching the camera.

Freeing the camera from the stick means it's less likely to get in the way of the subject, nor does the operator have to run alongside or risk being too close to moving subjects. This obviously allows for more creative freedom as well, hence these dramatic action shots. What remains unknown is how Insta360 can ensure that the spherical lenses are well-protected from such reckless usage -- hopefully by offering a special rugged case instead of an umbrella (though having both would be handy).

For the second video, Insta360 took no time to acquire the recently launched GoPro Hero 7 Black for a head-to-head comparison, especially on stabilization performance which GoPro had been working hard on. The operator placed both cameras plus a Sony FDR-X3000 onto the same stick, and then headed off for a quick parkour session.

Impressively, the new Insta360 camera almost canceled out all the extreme movements (even the front flip!), whereas the other two action cams left us with shaky clips despite with their stabilization modes enabled. Of course, it's not exactly a fair comparison here given the increased headroom in 360 content to buffer with; we'd have to wait for new or updated 360 cameras from other manufacturers for a proper match.

There's still a somewhat valid argument here, though: Insta360 reckons that given their versatility, VR cameras make great replacement for conventional action cams. But for some, it depends more on the image quality -- something that many handheld 360 cameras haven't quite mastered yet due to physical limitations.

As you'd expect, not much else has been said about this upcoming camera other than its October 10th launch date. Chances are Insta360 still has some tricks up its sleeve, and the surfing image in the teaser banner also suggests some form of water protection; we shall find out in two weeks' time.

In this article: 360, 360camera, camera, cameras, gear, insta360, insta360one, one, video, vr, vrcamera
All products recommended by Engadget are selected by our editorial team, independent of our parent company. Some of our stories include affiliate links. If you buy something through one of these links, we may earn an affiliate commission.