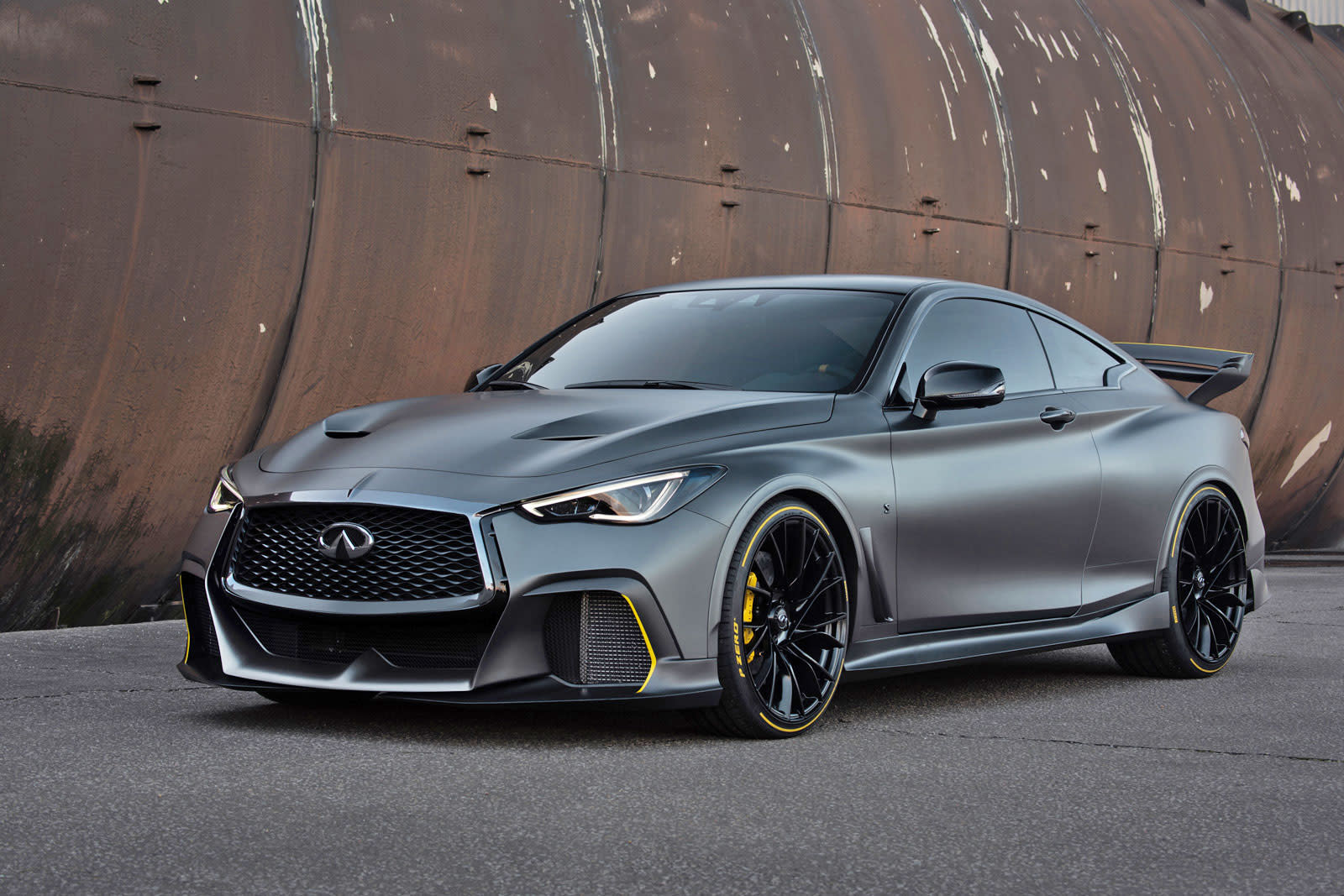 Most hybrid cars are meant to save fuel and the planet. You can't say that about Infiniti's just-unveiled Project Black S concept, however -- here, it's all about speed. It's built on the design of the Q60 Red Sport 400, but contains a Formula 1-derived "dual hybrid" system that can recuperate electricity when the car is braking and accelerating. There's one motor generator unit that captures energy from the brakes. The real stars, though, are two motor generator units on the V6 engine that collect heat from the twin turbos, translating it into either reduced turbo lag (by spinning the turbines faster than they would on their own) or as much as 120kW of power for the drivetrain.

The result is 563HP of combined power (41 percent more power than the Q60) with a 0-62MPH time of less than four seconds. Infiniti isn't more specific about its performance claims at the moment, but that's certainly more oomph than you usually get from a hybrid. You'll also find drive-by-wire and brake-by-wire systems that promise faster acceleration, faster gear shifts and more consistent, fade-resistant braking. It's not just about eye-watering acceleration and top speeds, according to Infiniti -- it's about "sustainable" power that won't decline quite so sharply on the track.

The company even characterizes Project Black S as a practical real-world car. While there are dedicated qualification and race modes that respectively emphasize raw capability and endurance, there's also a road mode for the street. This mode promises less aggressive energy recovery that's meant more for overtaking on the highway than setting lap records. It even improves the efficiency of acceleration. To put it another way, you wouldn't have to thrash this car to benefit from what it can do.

Project Black S is still an early prototype, and Infiniti plans to spend much of 2019 transitioning from dynamometer and virtual tests to more realistic driving in a wide range of conditions. You probably won't see this exact car in your garage any time soon. It's not just a one-off experiment, though, and it might show how many automakers will use hybrids going forward. It won't help the environment much, but it could lead to more exciting sports cars that can realize more of their potential in everyday conditions.

In this article: formula1, gear, hybrid, infiniti, nissan, ParisAutoShow2018, projectblacks, renault, transportation
All products recommended by Engadget are selected by our editorial team, independent of our parent company. Some of our stories include affiliate links. If you buy something through one of these links, we may earn an affiliate commission.