The Ford Edge 2019 gets better tech and minor facelift

Ford sells a lot of Edge SUVs. It unloaded 142,603 in 2017 alone. The reason is that it's a solid sport utility vehicle with ample storage space. It's a big vehicle so it's not particularly fast or agile, but it gets the job done. With the 2019 refresh (starting at $29,995), the automaker sticks with what works while creating a slightly more aggressive-looking vehicle and updating its driver-assistance features.

At the center of that new technology is Co-Pilot360. The Edge is the first Ford vehicle with the updated driver-assistance suite. Like other automakers, Ford has decided to drop its newest tech in an SUV because people buy a lot of SUVs. The result is a safer vehicle with some of the more important features available as standard equipment.

The biggest update to the semi-autonomous features is the lane-keep assist. Ford's previous system was reactionary instead of proactive. The vehicle would realize it was close to a lane and nudge itself back toward the center of the lane. It worked, but riders suffered from a bit of a ping-pong effect. On Co-Pilot360, the vehicle does its best to track itself into the center of the lane. 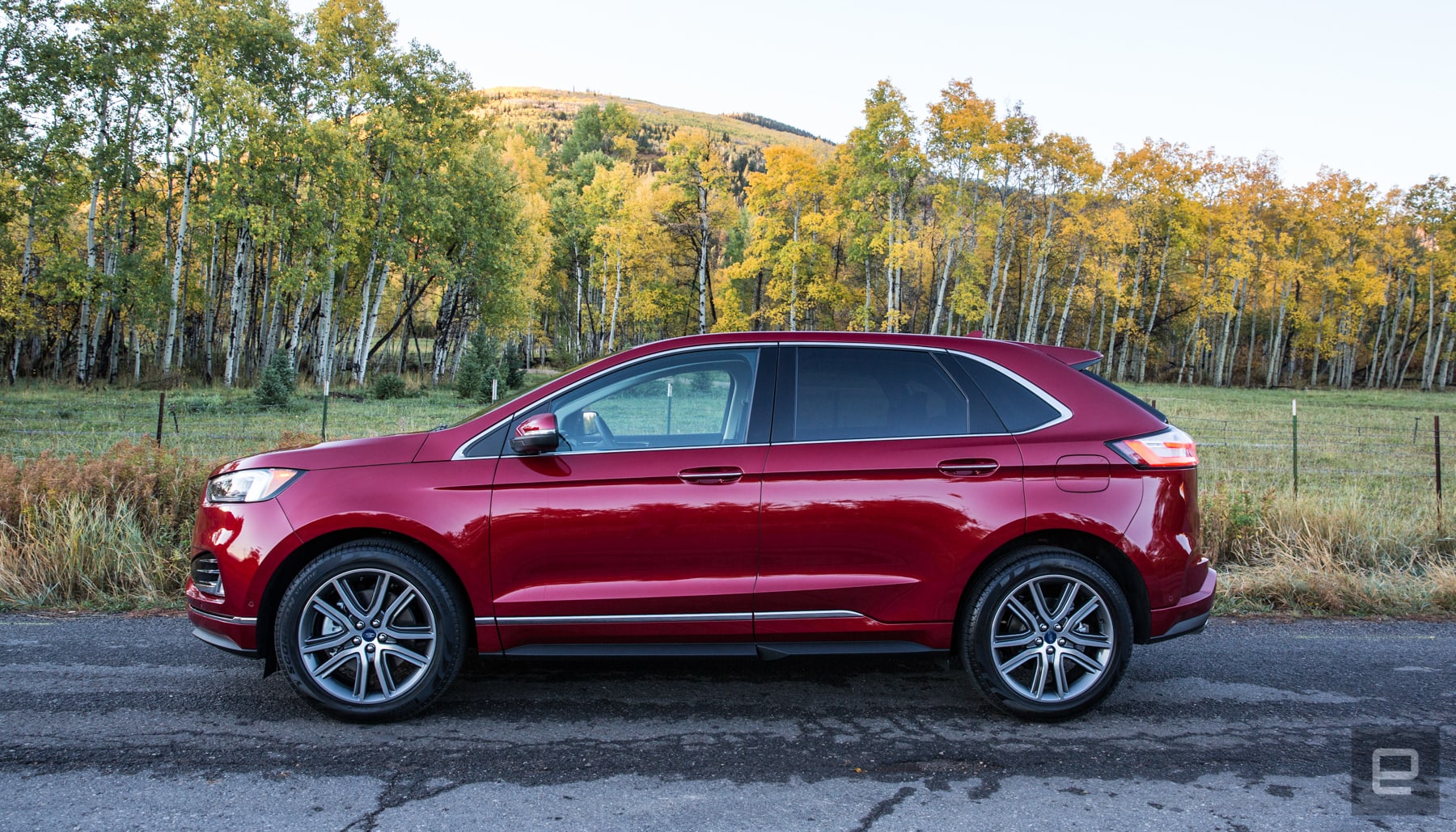 During my drives on the highways of Utah, I still noticed a bit of bouncing back and forth between lane edges, but it's far less than before. Even with these tiny ricochets, it's a superb evolution of the feature for the automaker.

In addition to doing a better job keeping you in your lane, Ford updated its adaptive cruise control to work better in gridlock. Co-Pilot360 will track and follow the vehicle ahead of the Edge even in stop-and-go traffic. So if a car in front of the SUV comes to a complete stop and then starts up again (within three seconds), the Edge will continue to follow it. After three seconds, the driver just needs to tap the "resume" button on the steering wheel. For commuters, this is great news and during my tests, it worked as expected.

While these updates are great, it's impressive that the features you hope never to use, like post-collision braking and auto-emergency braking are now standard. Ford even demoed the auto-emergency braking with an inflatable car (you know in case things go horribly wrong and the system fails to brake). I drove the Edge at the balloon vehicle, took my foot off the gas and brake and the SUV stopped within one foot of the faux car. It works, and it's standard.

Behind the wheel (when not driving the vehicle into giant balloon cars), the Edge delivers what you would expect from a mid-size SUV. The 2.0-liter 250-horsepower turbocharged 4-cylinder engine and eight-speed transmission give the SUV enough oomph for 90 percent of the freeway and city driving the car will encounter. But if you want to gun it from a dead stop, be prepared to wait a few beats before the Edge lurches forward. It's not meant to be a drag racer, but it takes a bit to get used too especially when trying to pull out onto a busy street. 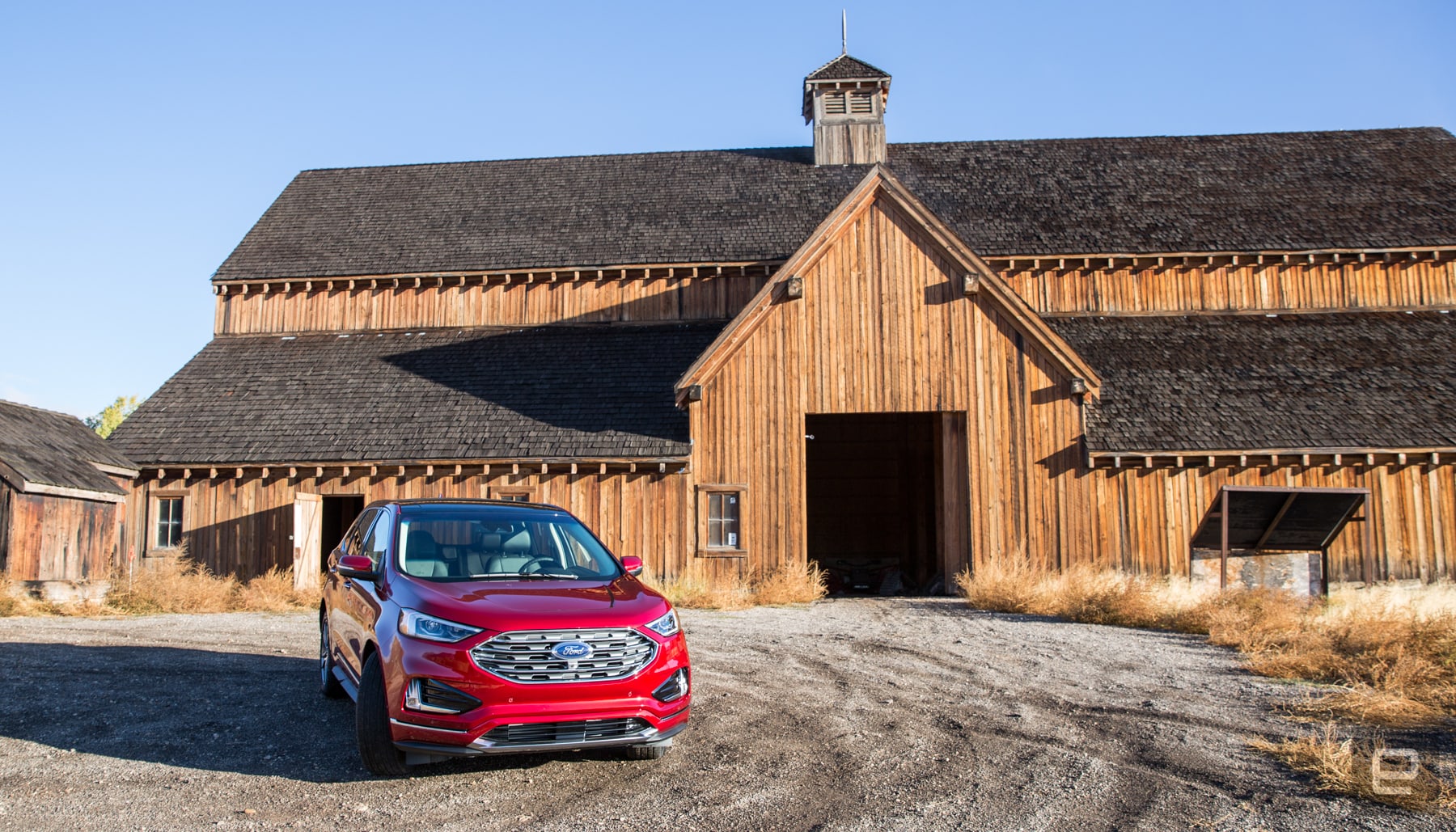 The vehicle has all-wheel drive, but for efficiency's sake, most of the time the SUV is pulled along by the front two tires. The all-wheel-drive system jumps into action automatically during hard acceleration, when wheels slip or even when towing (up to 3,500 pounds).

The steering, like the powertrain, is on point for the mid-size SUV. No more, no less. It handled itself admirably on free curves and around city intersections. Body roll started to rear its head while hitting sharper mountain corners. Again, the average Edge driver wouldn't push the car like this. Instead, they want room for five and storage capacity, which the SUV is more than able to handle.

The interior isn't exciting, but it is comfortable and all the features are laid out in a fashion that should make a driver at home within a few minutes behind the wheel. The storage area is huge for a vehicle this size. Ford has wisely forgone the trend of aggressive tapering off the back of their SUVs, therefore, eating into crucial trunk space. There's still a bit of an angle there, but unless you're buying all your things from Costco, you should be fine filling up the SUV with your stuff.

The Sync 3 infotainment system is still a first-rate way to interact with navigation, media, etc, even if it's not the prettiest system on the market. It's function over form, and that's fine. It's better than being confused trying to figure out how to get directions to the mall. If you'd rather interact with your smartphone, it supports CarPlay and Android Auto. 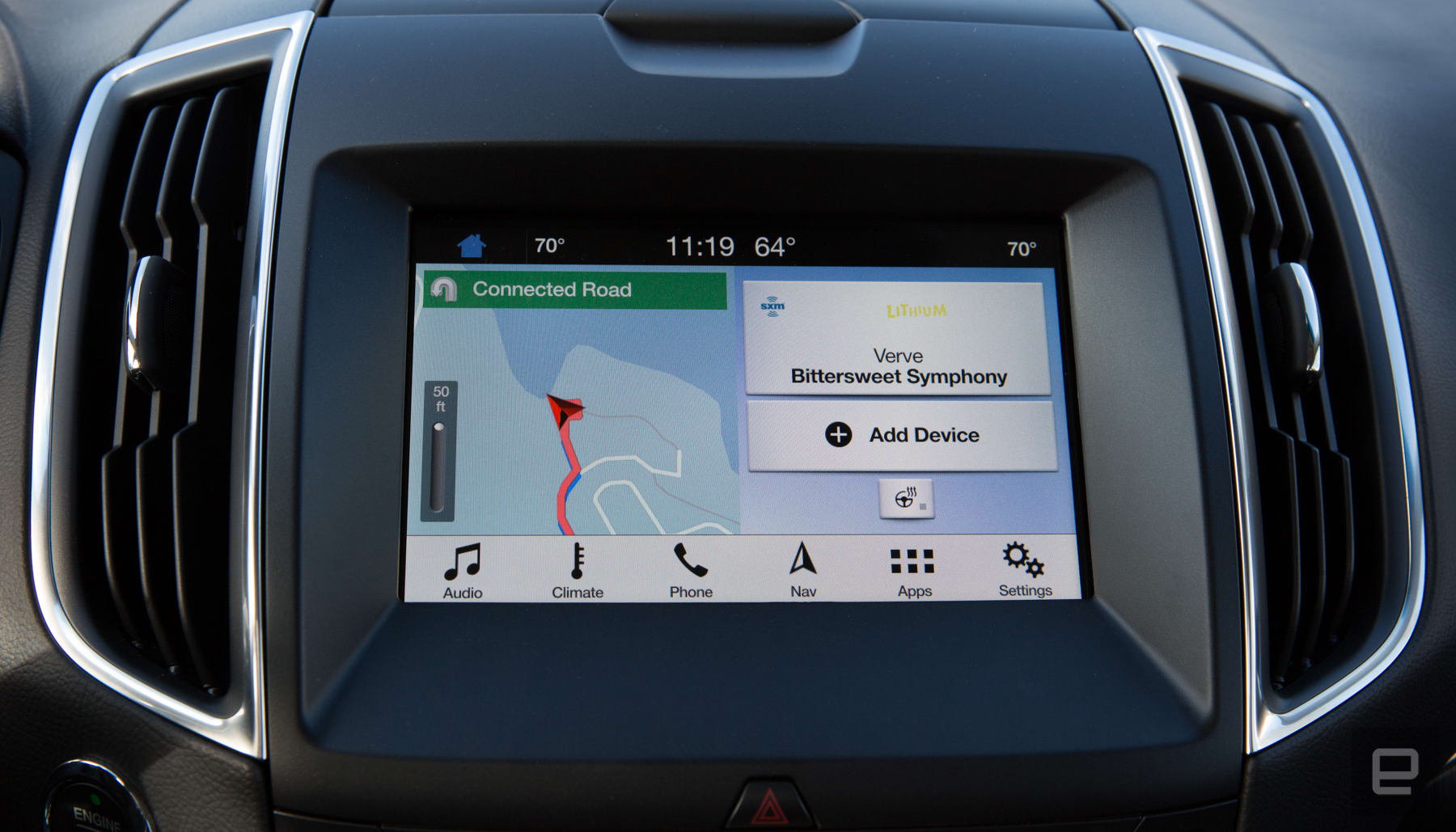 Ford played it safe with the new Edge. The design changes are small, it drives like you would expect an Edge to drive, and you can still put a week's worth of groceries for your family of four in the storage area. The Edge sells well; why mess with a good thing?

But more importantly, Ford is looking at safety. The Co-Pilot360 system is a great upgrade to the automaker's driver-assistance suite. The standard features like emergency stopping and braking after an accident make the Edge a more compelling offering. It even has a rear-camera washer standard, so even when you back up, you have a clearer view.