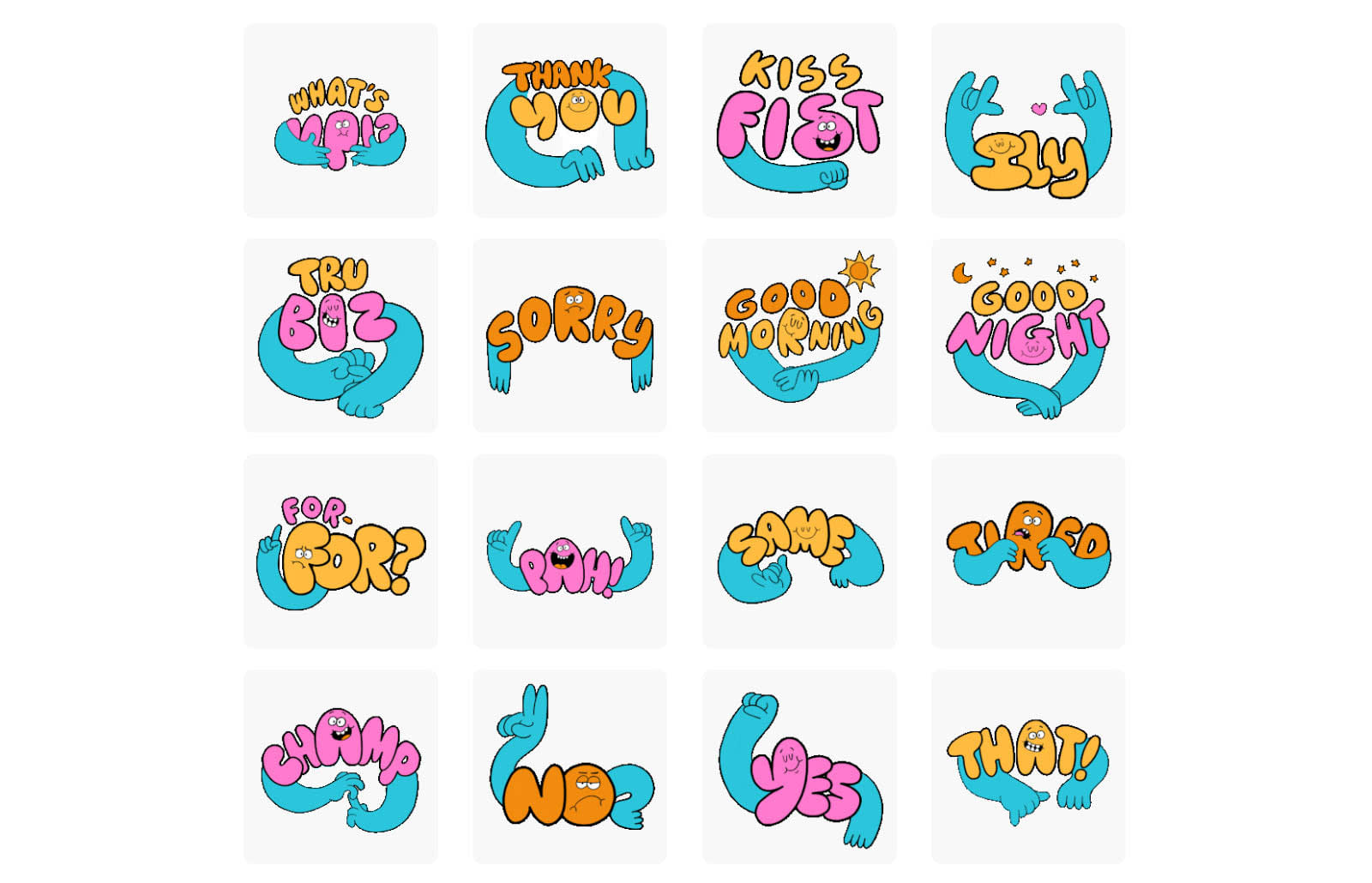 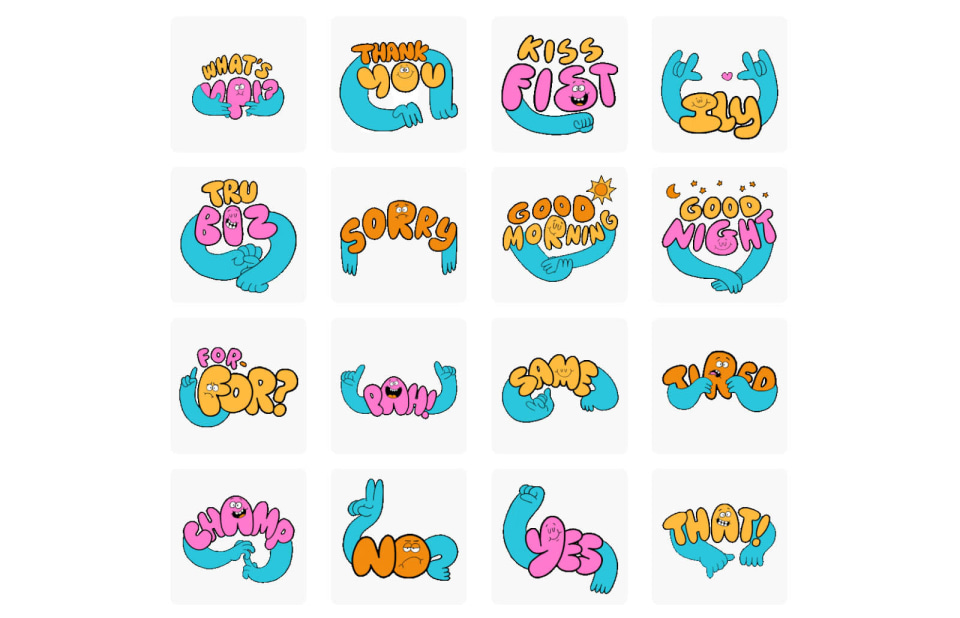 One of the benefits of using Google's Gboard, aside from predictive emojis and GIF searches, is the cute animated stickers. Sure, most of them are fun and silly, but there are a few that carry deeper meaning. One example is a recently released sticker pack of phrases in American Sign Language (ASL). Google developed them under the guidance of Jessica Flores, a San Francisco-based artist and YouTuber who's also an activist in the deaf community. In creating these stickers, her goal wasn't just to give a voice to the deaf and hard-of-hearing, but also to educate the world about the language she loves.

Unlike other Gboard stickers that are mostly decorative, the ASL ones convey a message. Each sticker comprises an anthropomorphic phrase, complete with a face and two hands, that signs the phrase it embodies. So with the "Thank You" sticker, for example, the face is in the "O," with two blue arms on either side. To symbolize "thank you," it touches its chin with the fingers on the right hand, and then exposes the palm forward. This way, Flores said, both the hearing and the hard-of-hearing can understand the message.

"When I first started the project, I thought the sticker was going to be a character like an elephant," she said to Engadget. "But if we did that, somebody who wasn't in the deaf community would look at the sticker and be like, 'What is the elephant doing? It's just moving its hands.'" Having the sticker be the phrase itself has the added benefit of teaching ASL to those who don't know the language, too.

A couple of years ago, however, she decided to take ASL lessons. "I started realizing that I didn't really have any way to communicate with people. I felt like I was just trying my best to lip read everybody and figure out what they were saying. The thing about lip-reading is when you lip-read, you don't catch everything they say. It's a lot of guesswork."

When she started to learn ASL, she was blown away. "'Oh my god', I thought, 'where have I been?!'" said Flores, bringing her hands to her head and expanding her fingers, mimicking an exploding mind. "Finally, after all these years, I had a way to have clear communications with someone. I never knew what that was like."

"My world changed completely," she said. At that point, she was still working at a coffee shop, and she always had people coming up to her to ask what it was like to be deaf and how she communicated with people. She decided that instead of telling one person at a time, she would start a YouTube channel, where she could try educating a bunch of people at once. It turned out to be a pretty rewarding experience.

"Like I said, I felt really alone growing up, right up until I was like 26 or 27 years old," said Flores. "But YouTube helped me a lot. I get a lot of deaf and hard-of-hearing people tell me of the same situation they had growing up." She began passionately advocating for ASL in the deaf community. "It doesn't matter if you can speak," she said. "If you're deaf, I really feel like you should learn ASL."

"Plus it's such a beautiful language," Flores continued. "It's so expressive and passionate."

For Flores, the stickers project was another way for the deaf and hard-of-hearing to communicate online. "Text is almost never enough," she said. "I would rather video call with my friends to really communicate with them."

"I feel like we are very visual people," she added. "We rely so much on visuals. Words are insufficient. You have to paint your own picture." The closest substitute to stickers that she can think of are GIFs, primarily due to the facial expressions. Even emojis are insufficient because they're static. "That's why I like stickers -- because they actually move."

Ryan Sand, the art director for Google's expressions team (which is responsible for messaging flair like stickers, avatars and camera effects), said that ASL had been a sticker pack idea for a while within the team. DeafGlers, a group of deaf and hard-of-hearing Google employees, was a strong proponent for it, too. "ASL is its own language, and it's especially visual," said Sand. "We thought an animated sticker set would be a really exciting way to raise awareness for ASL, and deaf and hard-of-hearing users can see themselves in the stickers."

When it came to finding the right artist for the stickers, however, the team knew that the person had to be someone local. "We usually work over video conference with artists," said Sand. "But for artists that are deaf or hard-of-hearing, we knew that wouldn't be great. We needed someone local, from San Francisco."

Enter Flores, who had submitted artwork to Google when the company put a call out for deaf artists. The company liked her art, but more importantly, her YouTube presence, because -- more than just an artist -- she was also a passionate advocate for the deaf community.

"We work really closely with artists to make authentic stickers, so that if you're a user, you'll find the stickers speak to you." said Sand. "That's one of the reasons Jessica was such an awesome fit for the program."

Google connected Flores with a local animator by the name of Juliana Chen, who used to be on the company's Doodle team. They met in person every week over the course of two months to figure out just what phrases they wanted to turn into stickers, and how they wanted them to look. Flores also recorded herself making the signs on video, so that Chen had a visual reference for what the stickers should look like.

One of the more challenging aspects of coming up with the animations is that ASL isn't just about making signs with your hands; facial expressions and body language are very important components as well. "One change of a body movement can change the sign completely," said Flores. "If I change the facial expression but make the same sign, it changes the entire meaning." That's why it was important that the anthropomorphic words had facial expressions to go along with the signs.

Unfortunately, however, the words don't really have a "body," which posed a bit of a problem at times. With the word "hungry," for example, the anthropomorphic word should really be dragging its hand in front of its stomach to signify hunger. The team attempted to move the "head" up to create a sense of a larger body, but it looked too weird. In the end, they settled on a kind of "invisible body" instead.

Flores added: "Juliana is really talented. She focused on the body language and facial expressions and brought these words to life."

A few of the stickers are slang words or phrases that are unique to ASL. For example, there's "Tru biz" which is similar to "Seriously!" For those who already know ASL, these stickers will make them feel acknowledged. But for those who don't know these slang terms, Flores hopes they'll look up the meanings online and perhaps learn about deaf history and culture in the process. "It's all about spreading awareness," she said.

"People should recognize it's an actual language," said Flores. "I hope people start learning it. I hope people recognize us more. It's like, 'Hey, we're here! Help us out!' It's about time."

In this article: asl, gboard, gear, google, internet, mobile
All products recommended by Engadget are selected by our editorial team, independent of our parent company. Some of our stories include affiliate links. If you buy something through one of these links, we may earn an affiliate commission.