It went from nine tabs to three.

Facebook has just announced a brand new Messenger app, and it promises to be a lot simpler than previous iterations. In Messenger 4, you'll get three tabs instead of nine. There's the Chats tab which houses all of your conversations, the People tab where you can see who's online and the Discover tab, which is focused more on connecting you with businesses. The latter will give you access to the platform's Instant Games feature as well.

At an event in Facebook's new San Francisco headquarters, the company admitted that Messenger had gotten bloated over the years. "It's not as simple as the app was at the beginning," said Stan Chudnovsky, the head of product for Facebook Messenger. "We knew it needed to be simple again."

In an effort to do that, Facebook wanted to make Messenger friendlier with a refreshed design and a simplified experience. So for example, instead of having to tap several times to send a photo or start a video call, you can now swipe on your friend's name on the Chats tab to access those features right from the home screen. Or, if you prefer, you can access the camera and video features in the compose window directly. It also placed those icons towards the upper right of the Chats tab to declutter the experience.

What's more, each conversation now has little contextual icons that tell you whether there's a game or video call going on. Another example is Discover and Games, which used to be two separate tabs; now it's just one. 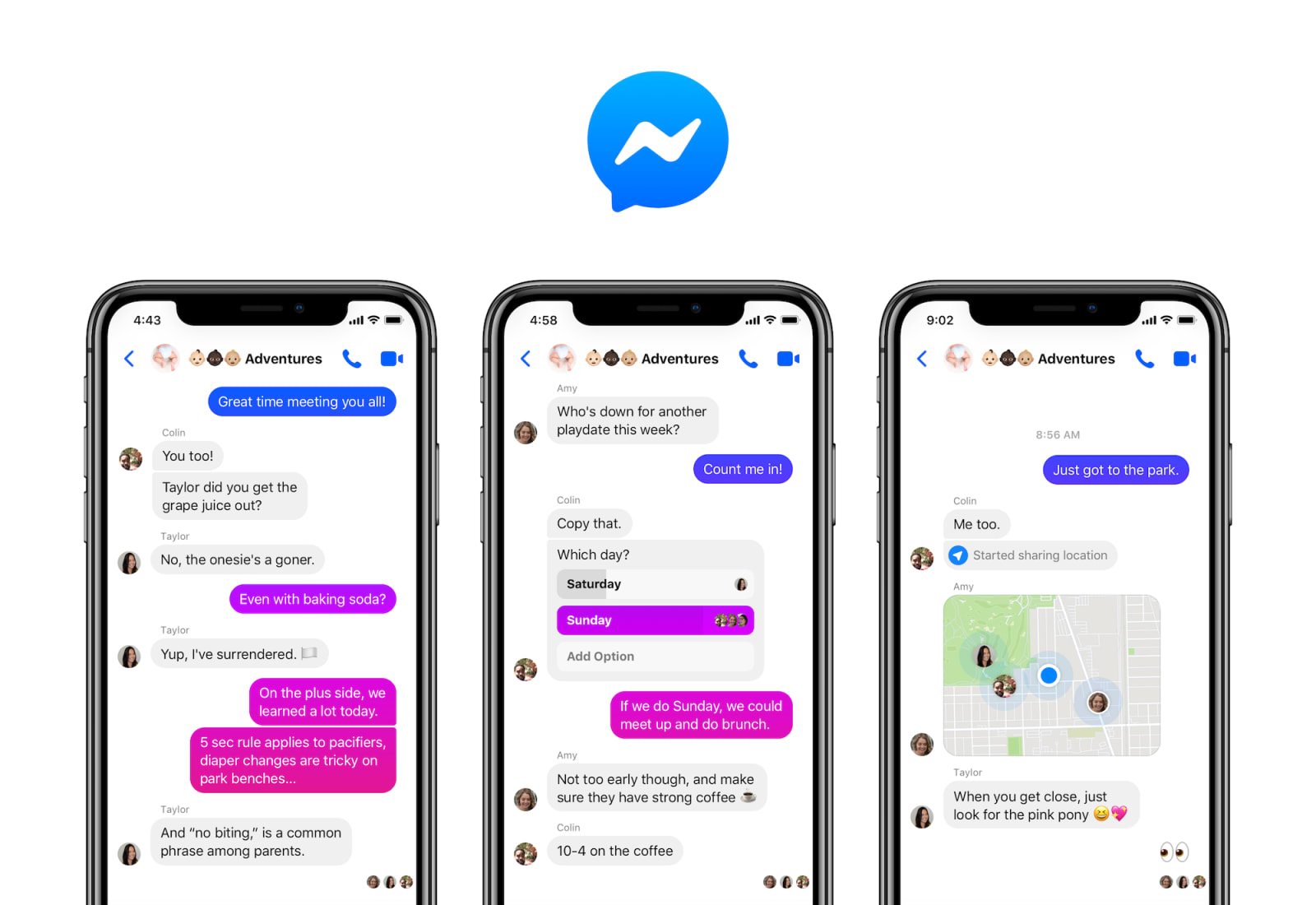 A lot of this was learned through studying user behavior, said Loredana Crisan, a product design lead for Facebook Messenger. For example, Groups is no longer an explicit tab in Messenger, mostly because the team discovered that people tended to build out a group conversation from one person to many, rather than going to the Groups tab directly.

Facebook Stories continues to be a big focus for the platform. You can access them from both the Chat and People tab -- they're represented by small circles in Chat, and larger tiles in People. Despite several feature bloat complaints about Stories, this appears to be the one area that Facebook isn't willing to get rid of. According to Facebook, 300 million people use Stories per day. 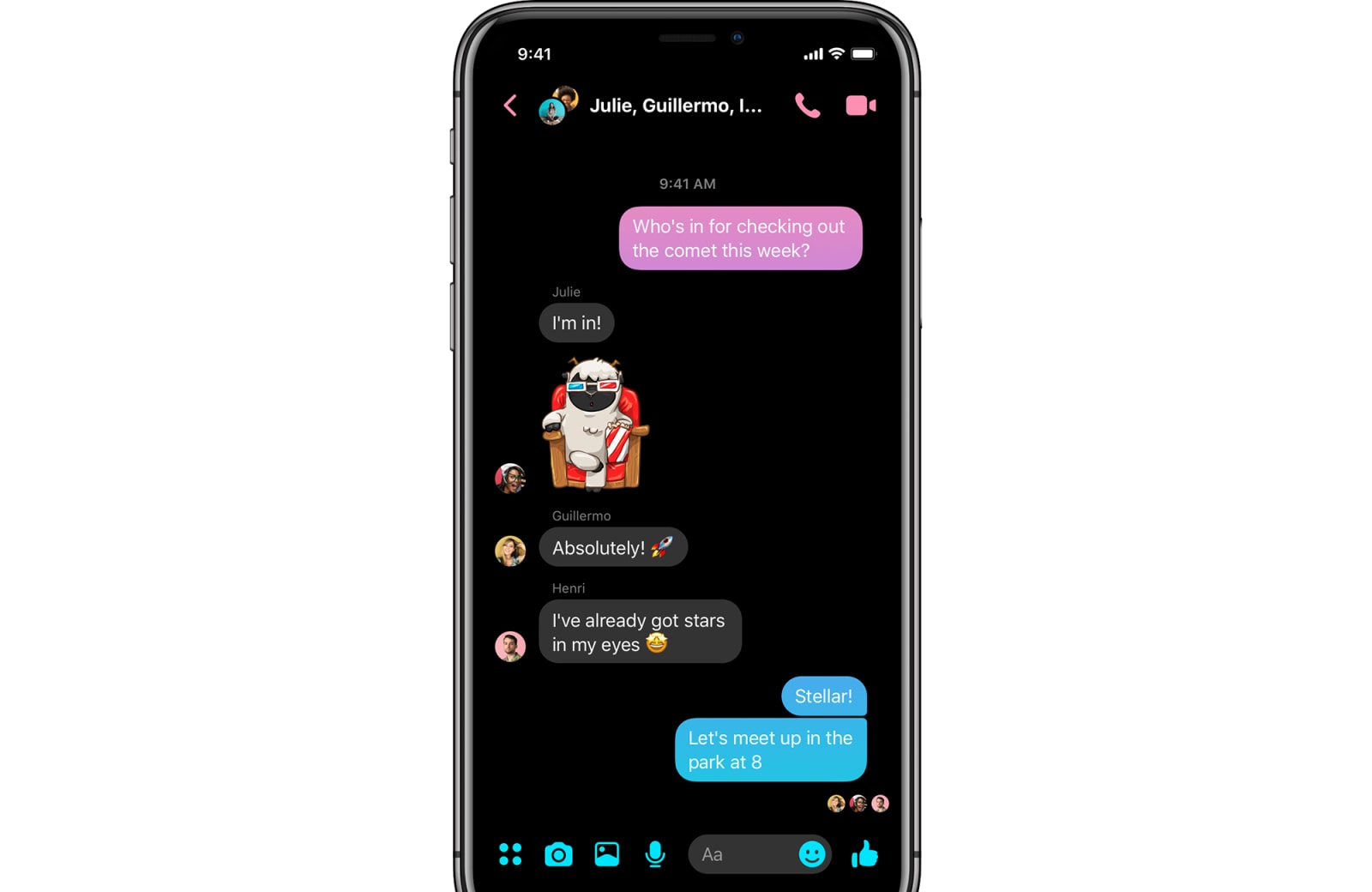 In addition to the new simplified look, Messenger is also introducing a new color gradients feature as a way to personalize your conversations and customize your chat bubbles. So, for example, you can have the colors change from yellow to blue as you scroll up and down your discussion.

At the same time, Facebook took care to mention that it wasn't taking away features. You can still do things like live polling, play challenge games, and do group video chat, just as before. In fact, Facebook also teased an upcoming Dark Mode feature that reverts the UI from black on white, to white on black.

The new Facebook Messenger will roll out to users starting today.

All products recommended by Engadget are selected by our editorial team, independent of our parent company. Some of our stories include affiliate links. If you buy something through one of these links, we may earn an affiliate commission. All prices are correct at the time of publishing.
Facebook is finally decluttering Messenger
f8
facebook
gear
messenger
messenger4
mobile