In 2015 we laughed at Hacking Team for getting hacked. Their profit-driven facilitation of human rights abuses around the world was somehow barely competent, but notorious. They sold illegal hackware and surveillance tech to brutal regimes and trained them in attacking citizens and journalists. We knew they were evil clowns. We just didn't expect what happened next.

The pirate ship of hacktivism crashed on the shores of Saudi Arabia when Crown Prince Mohammed bin Salman employed Hacking Team in the very first crackdown of his new reign in 2017. Hacking Team was back -- thanks to a "mysterious investor" connected to the Saudi government in 2016.

We did not, could not foresee their trajectory drawing a direct line between hired gun hacker organizations, like Hacking Team, and a man being cut apart while he was still alive. With a side view through a window into just how blood-soaked that Saudi tech-investment money really is.

It wasn't just that the Saudi government used Hacking Team's tools on Jamal Khashoggi and anyone who came near him. They did. One of the Saudi agents identified as being part of the 15-member assassination team was a man named Maher Abdulaziz Mutreb. BBC Arabic revealed that Mutreb, a colonel in Saudi intelligence, took a two-week training in digital surveillance tools by Hacking Team. Apparently he excelled at the physical security aspects, but not so much on the skills required to be a murderous computer-toucher. Was it his plan to wear the fake beard and wrong shoes that fooled no one? We wonder. Regardless, Mutreb learned how to use hacking tools on civilians from Hacking Team.

And there was also the reported mastermind of Khashoggi's killing, Saud al-Qahtani. The one who ran the dismemberment op via Skype. Before the murder, Mr. al-Qahtani was identified in Hacking Team emails after the surveillance firm was hacked. He reached out to Hacking Team personally in 2015 expressing desire to "develop a long and strategic partnership" between the Saudi Royal Court ("THE King Office") and Hacking Team.

He was fired by Crown Prince bin Salman last weekend over fallout from the assassination's botched cover-up. Now Mr. al-Qahtani's job title is "Chairman of the Saudi Federation for Cybersecurity, Programming and Drones."

Before the alleged firing of al-Qahtani, from bin Salman there was much nail-biting and curiously revealing contortions in the form of denials that didn't actually deny what happened to Jamal Khashoggi. A Saudi official told Reuters the Prince had no knowledge of the operation that led to Khashoggi's death and "certainly did not order a kidnapping or murder of anybody." 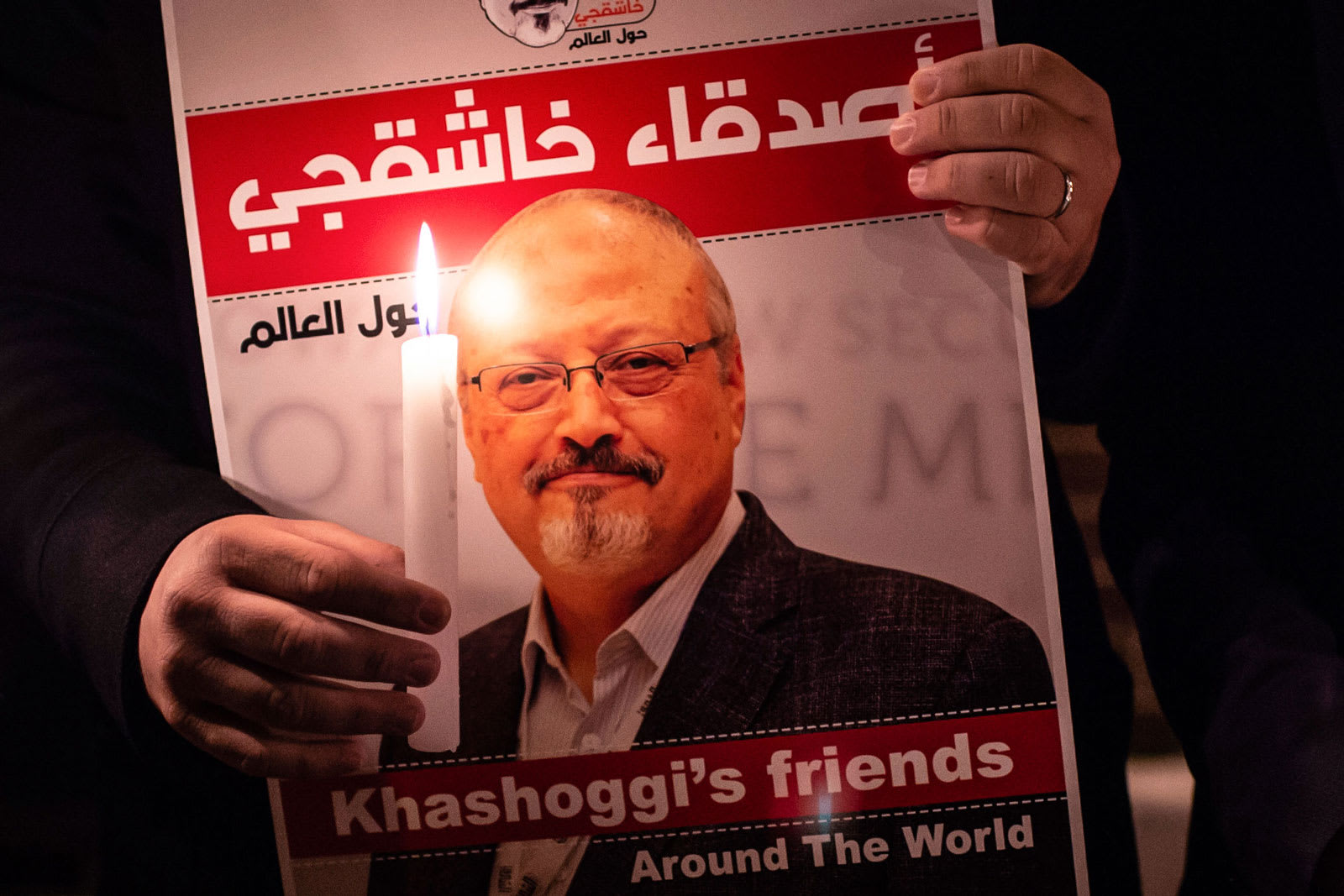 At an opulent international investor conference in Riyadh Wednesday, bin Salman said on a panel that what happened to Khashoggi was "a heinous crime that cannot be justified." And then he made a joke about Prime Minister Saad Hariri of Lebanon totally not being kidnapped on Saudi soil while Mr. Hariri sat next to him.

(Hariri was "detained" in Saudi Arabia on the orders of bin Salman last year. NYT reported: "he was stripped of his cellphones, separated from all but one of his usual cluster of bodyguards, and shoved and insulted by Saudi security officers ... He was handed a prewritten resignation speech and forced to read it on Saudi television." Saud al-Qahtani, the Skype murder coach and big fan of Hacking Team, apparently "masterminded" this operation.)

Some press expressed amazement that bin Salman said words about a thing every human on the planet is talking about, though no one commented on the noticeable improvements in his creative fiction skills. Stateside, Trump was flabbergasted that they didn't cover it up very well. America was just surprised Trump made words that weren't encouraging Americans to kill journalists. When asked, Trump and Jared Kushner expressed to reporters that they do not want to seem unfairly mean to a man made of money who probably ordered a journalist dismembered alive with a bonesaw. In the middle of this, a CNN reporter told Jared he has "the dopest job in the world." 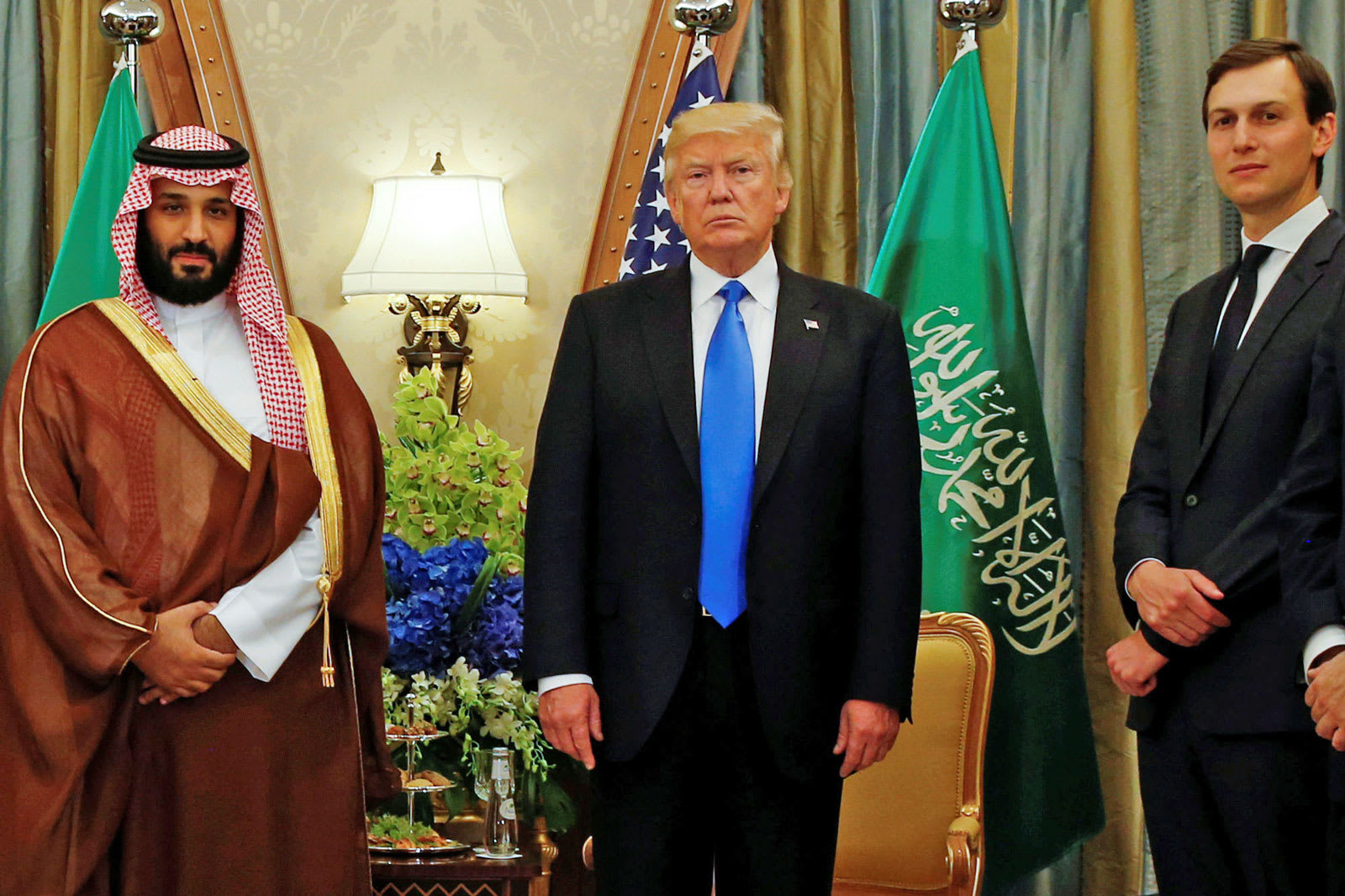 To "code jocks" like Hacking Team, providing tech support for Khashoggi's murderers must just be "business as usual." I mean, they wouldn't even be around if they didn't get that rescue investment cash from the Saudi government.

When Politico on Tuesday asked about their Saudi funding in light of Khashoggi's murder, Uber, Lyft, Tesla, and Twitter remained silent, either declining to comment or outright ignoring the press inquiry.

Clever readers may notice that some big tech companies are not funded by PIF/SoftBank. Like Twitter, which was instead brought back from the brink of financial implosion in 2015 by Saudi billionaire Prince Alwaleed bin Talal and his combined investment-purchase of 30,100,000 shares (5% of the company).

It's possible you may recall an incident early this year in which bin Talal was held captive for two months (along with other influential and wealthy businessmen) on bin Salman's orders at a Ritz Carlton in Riyad. The New York Times reported they were subject to coercion and physical abuse, with 17 hospitalized and one dead in custody. " Skype dismemberment director and Hacking Team snuggler al-Qahtani "masterminded" this operation, too.

To leave the Ritz," NYT wrote, "many of the detainees not only surrendered huge sums of money, but also signed over to the government control of precious real estate and shares of their companies — all outside any clear legal process."

After over a decade of covering hackers and hacking around the world, I get the sense that a lot of people in the business who see themselves as "gangsters" and "hustlers" on the hacking scene rarely get the chance to see the real-life results of their work for people they know do horrible things. That's why I wanted to trace Hacking Team's role here. But it's been the same in Silicon Valley. Although at this point I suppose we expect to see smiling, friendsy photos like these of Mark Zuckerberg cavorting with Crown Prince bin Salman.

On "Hacker News," the watercooler of the elite class who create and maintain our propaganda-soaked hellscape professionally, Khashoggi's untoward dismemberment presented techies with the topic of getting rich off Saudi investment money. Competition for Saudi money in the Valley to fund "disruptors" is, well, ruthless.

For the most part, the overfunded pack of idiots who've re-shaped our world ended up praising dictatorships, equating values with legal limits, and defending Gaddafi. It was also a masterclass in whataboutism. Read it knowing Some expressed surprise that they can no longer be cavalierly apathetic in public to the years of copious information on the Saudi government's beheadings, kidnappings, and slow starvation of 14 million Yemeni people -- once they realize it's bad for "optics."

All products recommended by Engadget are selected by our editorial team, independent of our parent company. Some of our stories include affiliate links. If you buy something through one of these links, we may earn an affiliate commission. All prices are correct at the time of publishing.
badpassword
business
column
corruption
DonaldTrump
gear
hackers
HackingTeam
internet
Lucid
MarkZuckerberg
money
opinion
personal computing
personalcomputing
politics
SaudiArabia
security
SiliconValley
Slack
Snap
Tesla
Twitter
Uber
VisionFund
weWork