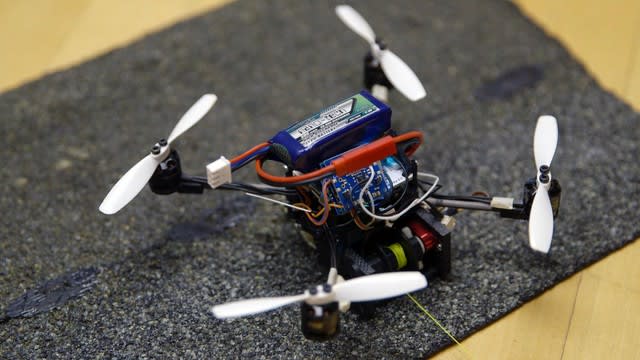 If you ask these tiny drones, "Do you even lift, bro?" you will get a resounding yes. Researchers at Ecole Polytechnique Fédérale de Lausanne (EPFL) in Switzerland and Stanford University have developed a line of small flying bots that can move objects that are 40 times their weight.

The drones, called FlyCroTugs (short for "flying, micro tugging robots"), are equipped with a system of winches, adhesives and microspines that allow the tiny crafts, which weigh just a few ounces each, to latch onto just about anything. The winch is one of the few immovable parts of the highly customizable drone -- just about everything else about it can be modified for a given scenario. The grippers can be moved around depending on the landing surface, and the drone can take on additional accessories like wheels when a job calls for it.

When it's time for the drones to lift, they can deploy the grippers and connect with the object. The grippers are a non-sticky adhesive that researchers designed by taking inspiration from the toes of geckos. Rather than just dropping a sticky pad or some hooks, the drone grippers create intermolecular forces between their adhesive pads and the surface of an object. When that won't do, the microspines -- a series of metal spikes resembling the point of a fishing hook -- can be called in. Once a drone is connected to the target object, it uses the winch to lift, and can pick up 40 times the weight of its tiny body.

The researchers imagined the drones as a potentially useful tool in sensitive situations like rescue scenarios. They can carry small items on their own or can be used together to move heavier objects. In one instance, researchers used two of the FlyCroTugs bots to open a door by lassoing the handle, turning it, and pulling until it opened. In another instance, the researchers handed the drone a camera and used it to explore a crumbling structure.

The next step for researchers is developing autonomous controls and addressing some of the logistics of using multiple drones at the same time. Just be glad these little guys still have a pretty low lift capacity. When the swole drones show up, humanity will be in trouble.

In this article: drones, EcolePolytechniqueFederaleDeLausanne, epfl, flycrotugs, gadgetry, gadgets, gear, robots, stanford, StanfordUniversity, transportation, uav
All products recommended by Engadget are selected by our editorial team, independent of our parent company. Some of our stories include affiliate links. If you buy something through one of these links, we may earn an affiliate commission.