Honor's Magic 2 is yet another notch-free slider phone

Another day, another brand new all-screen Android phone from China. Merely days after the Xiaomi Mi Mix 3 and hours after the Nubia X, today's official unveiling of the Honor Magic 2 brings little surprise given its recent viral campaign. Still, there are some interesting tidbits: The Magic 2 bears the same 6.39-inch 2,340 x 1,080 AMOLED screen as the Mix 3, but rather than packing the popular Qualcomm Snapdragon 845 processor, it uses Huawei's very own HiSilicon Kirin 980 chip -- the same "AI" brain inside the premium Mate 20 series -- made with the more advanced 7nm process. It even has an in-display fingerprint reader, a slightly bigger 3,500 mAh battery plus a total of six cameras from both sides. Take that, Galaxy A9!

Despite the near-identical sliding form factor, the Magic 2 actually uses a different mechanism than the Mix 3 -- a butterfly five-track sliding mechanism instead of the latter's dual neodymium magnetic rails. So far, I have to say that I prefer the Mix 3's springier and thus more reassuring feel, but that's not to say that the Magic 2 feels sloppy; it's fine as it is.

What's actually more distracting is the fact that this device's gradient mirror finish -- be it in red, blue or "black" (which is more of a "silver to black") -- is a fingerprint magnet, but that's nothing new for those who are already familiar with Huawei's P20 series or phones with similar two-tone finishes. Smudges aside, I actually like the red version, but I can also see how this bold design a big no-no for many people -- it's made for those who really like to show off. 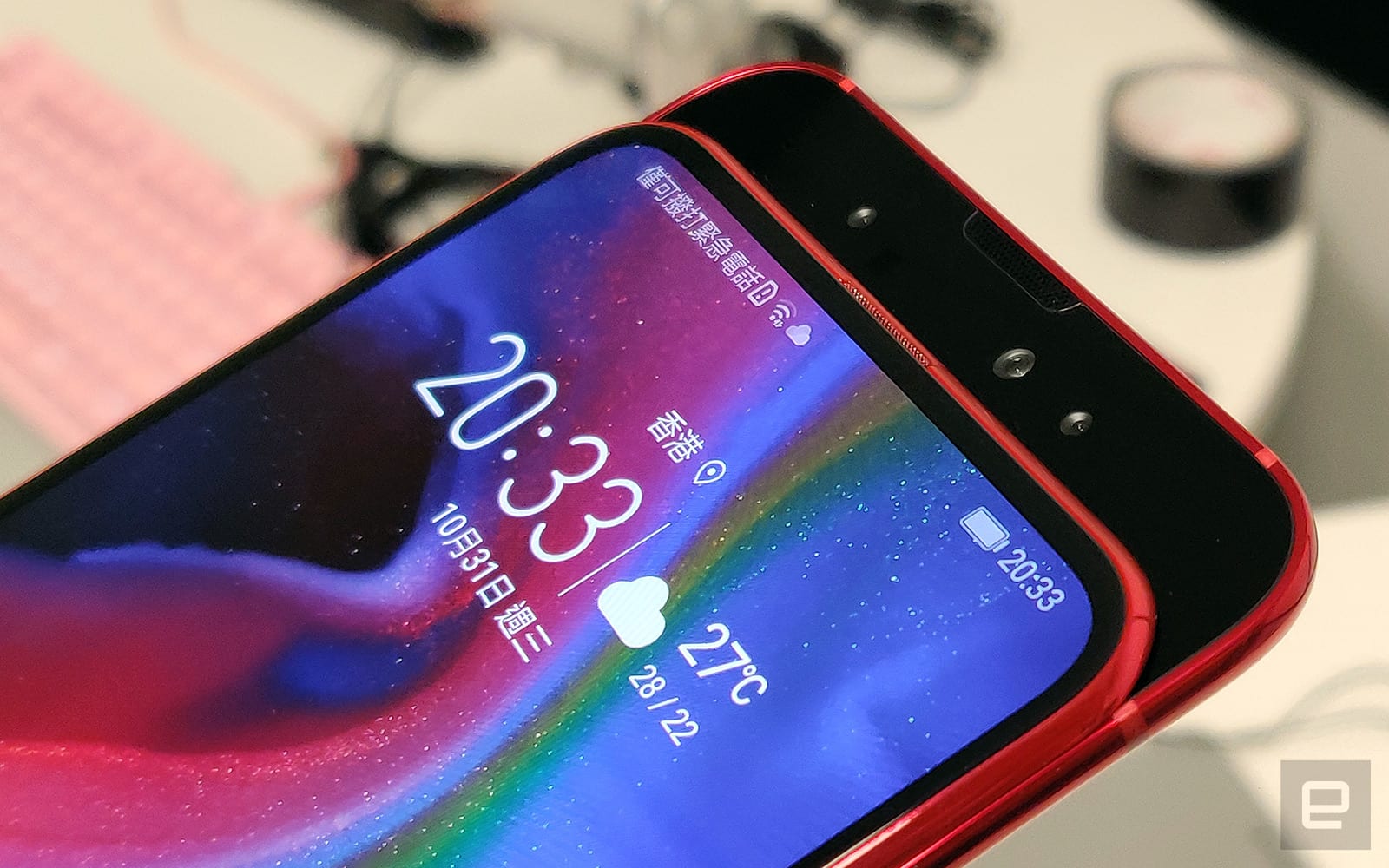 As for the six cameras, it's three on each side. The rear module bears some resemblance to the one on the Huawei P20 Pro, though it has a different setup: A 16-megapixel f/1.8 main camera, a 24-megapixel f/1.8 monochromatic camera plus a 16-megapixel f/2.2 super wide angle camera. Thanks to the Kirin 980's neural processing unit, the Magic 2's main camera also supports six-second handheld long exposure capture -- the same feature which the P20 series first impressed us with. As for video, there's 4K capture as well as super slow motion at up to 480 fps in 720p.

On the other side of the Magic 2, slide the screen down and you'll find a 16-megapixel f/2.0 camera in between a pair of 2-megapixel f/2.4 assistive cameras -- the latter set is for bokeh and various portrait lighting effects. Interestingly, on the more premium "3D Light" edition, the pair of cameras are replaced by infrared sensors, and the module has an additional dot projector. Honor didn't dive into the details, but my guess is that since the pair of infrared cameras can get depth perception, they are able to do 3D face scans without using a structured light 3D sensor -- a smart move to avoid potential lawsuits. 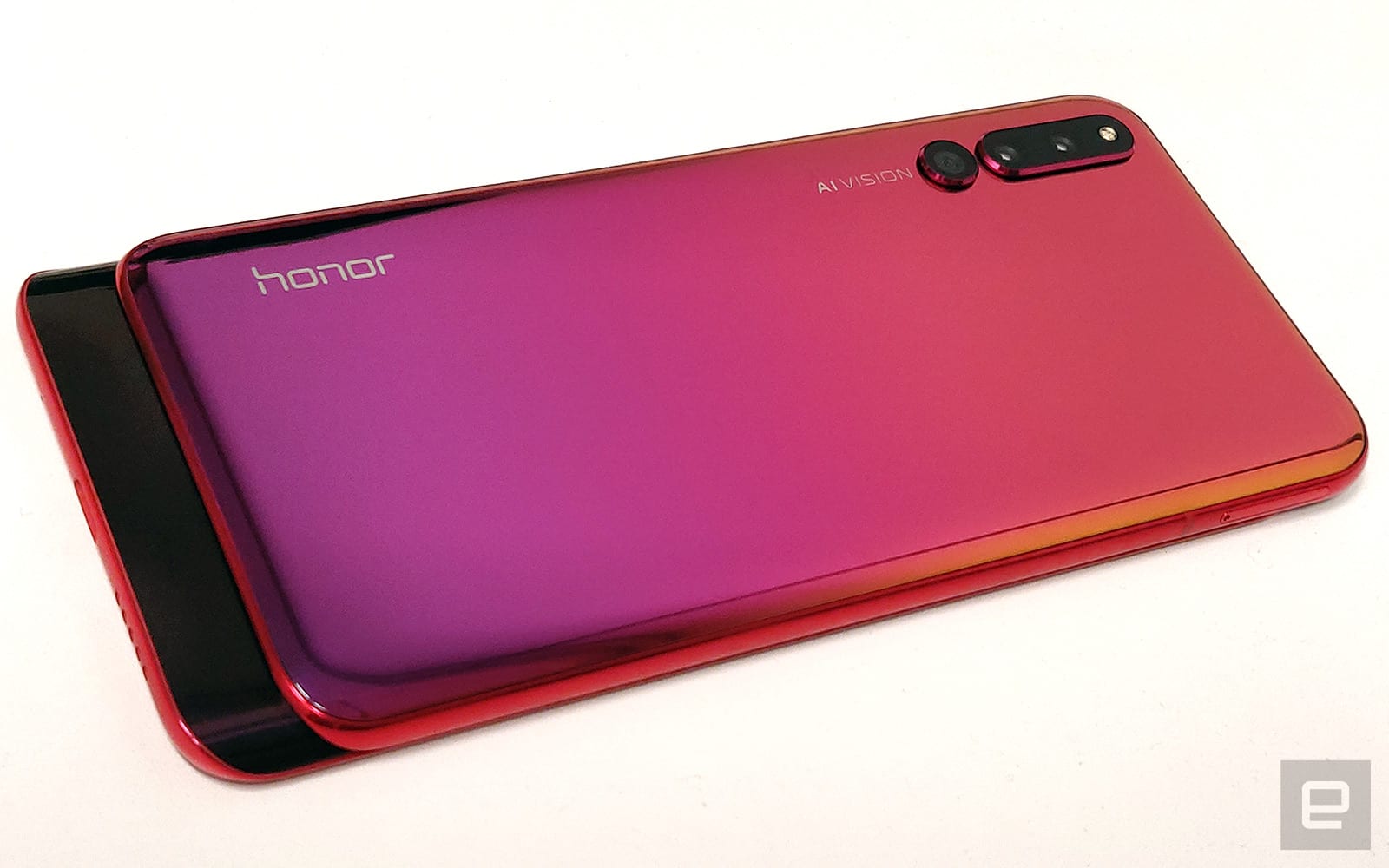