The company's thrown the best of everything at this thing.

Over the past few months, all major smartphone manufacturers have laid down their last hands and stepped away from the table for the rest of the year. Apart from Huawei, that is, which -- as usual -- is getting the last word in by spilling the beans on the new Mate 20 and Mate 20 Pro today. Historically, the Mate series was intended as direct competition to Samsung's Note family, but these days it's more like Huawei's fall flagships, filling in the gaps between the spring, P family launches. It's no great revelation, then, that the Mate 20 Pro features the high-end camera system Huawei's become known for. Beyond that, though, the company's crammed all the best smartphone tech it could into the Mate 20 Pro, including special charging features you can't find anywhere else.

According to Huawei, 40W fast-charging will take the Mate 20 Pro from 0 to 70 percent in 30 minutes, and 15W wireless charging transfers power at speeds well above the industry standard. What's more, the Mate 20 Pro can charge other devices, not just Huawei's new wireless Freebuds 2 earphones. Practically anything that supports the Qi standard can be charged wirelessly by the Mate 20 Pro, so you can juice up your friend's phone at the bar so they've got enough power to order their Uber home. You may never find much use for this, but it's not often you get a smartphone with a truly unique and kinda fun feature, so kudos to Huawei for thinking of this one.

Larger-than-average displays have always been a part of the Mate proposition, and nothing's really changed in that regard. The 20 Pro has a 6.39-inch OLED HDR display that's very crisp thanks to its high resolution (3,120 x 1,440). The screen stretches out to the handset's edges in all directions, save for the slice the notch carves out, and falls over the curved sides much like the display does on the Galaxy S9. In fact, the general feel of the Mate 20 Pro -- the way the contours on front and back pinch at the sides -- is extremely similar to the Samsung flagship.

A 6.39-inch display might sound gargantuan on paper, but it doesn't seem that way in the hand. The 19.5:9 aspect ratio and bezel-free design makes the device tall, but not so broad it's uncomfortable to use. The back of the handset is ever-so-slightly textured with what Huawei calls a hyper-optical pattern. This finish, the company says, offers better grip than slick glass and makes it more resistant to fingerprint marking, though it doesn't immediately feel that different.

The Mate 20 Pro will be available in dark blue, green, black and pink gold, which is more pink than gold. But undeniably the most desirable option is Twilight, the multicolor blue and purple finish first introduced on the P20 Pro. It's a little different this time around, though, as Huawei's flipped the gradient so it starts darker down the bottom and gets lighter up top. The red power button is a nice touch, too. Like the P20 Pro, the new Mate has a Leica-endorsed triple camera system, but instead of the three lenses being stacked on top of each other in a corner, they now sit centrally on the back. This square eyepiece is bold, brash and will no doubt be divisive. But due to its symmetry, it seems like a considered design choice intended to highlight one of the phone's primary features. We've already seen the Mate 20 Pro's 24MP front-facing camera (with 3D depth sensor for face-unlocking) in action on the P20 Pro, but the three rear lenses aren't identical to Huawei's spring flagship.

You still get the 40MP wide-angle (f/1.8) camera and the 8MP telephoto lens with 3x optical zoom (f/2.4), but the 20MP monochrome sensor has been switched out for a color, super-wide-angle (f/2.2) replacement. For years, Huawei has used monochrome sensors to capture extra contrast and light data to improve the output of the phone's other cameras. The company tells me the quality of smartphone cameras has improved so much that this extra data is no longer needed. While it means you can't shoot native black-and-white photos with the Mate 20 Pro, you now have a new 20MP super-wide-angle lens as compensation.

Huawei's Master AI continues to play a big role in the camera experience. Left to its own devices, it'll automatically select the right scene mode, focal point and settings for you, and even which lens to use to capture the best shot. When shooting video, it'll keep focus locked on the intended subject, and the smarts lets you apply special effects in real time. I'm particularly fond of the mode that allows you to isolate a specific color in the viewfinder so all other colors appear in black and white.

Take a picture of a computer screen at a weird angle and AI will fix the orientation and perspective for you, resulting in a ready-made PowerPoint slide. AI will also pick the best photos and clips to stitch together into a 10-second highlight montage after a birthday party or what have you. With the new HiVision feature, you can point the camera at that friend's jacket you like, and it'll find retailer listings online, or at your lunch to see an estimate of calorie count and other nutritional information.

Huawei's P20 Pro is arguably -- or unequivocally, as DxO Mark is concerned -- the best cameraphone on the market right now. Obviously a quick play with the Mate 20 Pro doesn't tell the full story, but pictures look pretty damn good on its high-resolution display. The new super-wide-angle lens fits a lot more in the shot than the main 40MP camera, too. Needless to say, we expect extremely good things from the triple camera system when we get a chance to dive a little deeper.

While the camera is easily one of the biggest draws of the Mate 20 Pro, it's a serious flagship in every other sense, too. It's powered by Huawei's brand new octa-core Kirin 980 processor, for example, and its 6GB of RAM and 128GB of expandable storage are as much as anyone could really need. Naturally, Huawei's new EMUI 9.0 software, based on Android Pie, runs the show. According to the company, responsiveness and app load times are significantly improved compared with the last EMUI version.

The latest build also introduces a simpler settings menu and the next generation of GPU Turbo, which optimizes performance and decreases power consumption while you're gaming. Any specific claims regarding this behind-the-scenes feature need to be taken with a pinch of salt, though, as Huawei was recently caught cheating benchmark tests. There's a built-in password manager that stores usernames and passwords on the device (not in the cloud), so you can quickly log in to sites and services using your fingerprint or face, and a new digital wellness feature, too.

Similar to the Android and iOS takes on screen-to-life balance, this will report your usage back to you, let you set time limits on certain apps and turn the display monochrome when you decide to "wind down" for the day. PC projection, which is Huawei's version of Samsung's DeX mode, now works wirelessly, and the phone will act as a more useful touchpad with highlighting and screen-capture features. 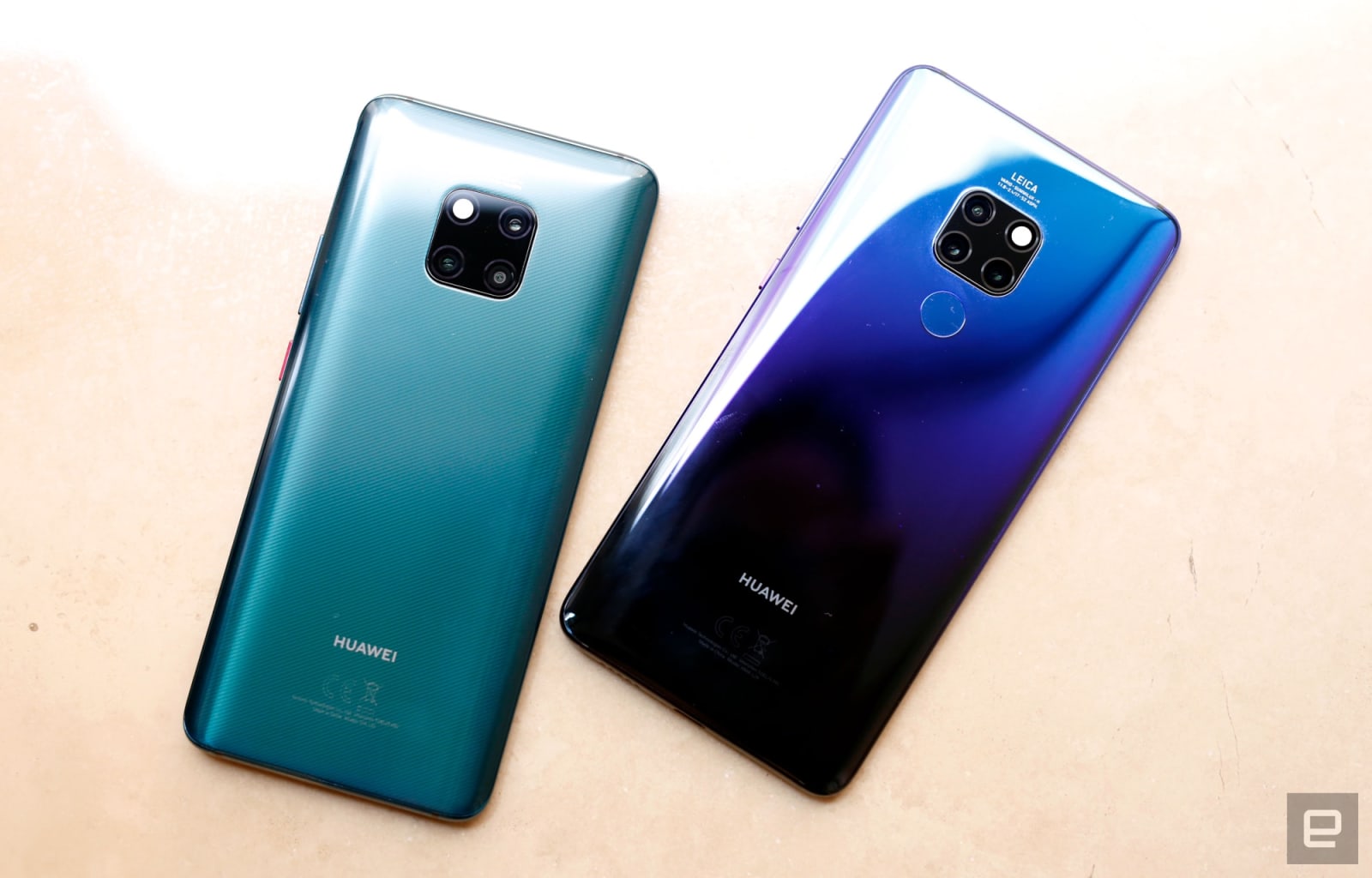 The Mate 20 Pro's Kirin 980 chip is worth addressing in greater detail. To conserve as much power as possible, different cores are switched on and off depending on the task at hand. The cores with the highest clock speeds will only kick in to handle gaming, for instance, while more efficient, slower cores will keep things ticking over when the phone's idle. And that's in addition to the 7nm architecture, which improves performance and saves power by design compared with 10nm chips. Battery life should be above average, then, and the Mate 20 Pro has a large, 4,200mAh capacity to work with as it is.

I haven't even gotten around to the device's other top-end features like its in-screen fingerprint reader, Cat 21 and WiFi 802.11ac Wave 2 support, as well as an IP68 dust and waterproofing rating. Huawei's thrown absolutely everything at this phone and it shows that, in some respects, the company's no longer playing catch-up to the darling smartphone brands. If anything, the world's number-two phone manufacturer is leading the way with a few things you can't find anywhere else.

This time last year, we were left scratching our heads over the Mate 10 and Mate 10 Pro, because there were upsides to both devices. This generation, though, there's a clear separation between the two. The Mate 20 has a larger, 6.53-inch display with teardrop notch, but it uses an LCD HDR panel with a lower resolution (2,244 x 1,080) than the Pro. It also has a slightly smaller, 4,000mAh battery and slower, 22.5W fast-charging that'll boost you from dead to 58 percent in 30 minutes. The Mate 20 is also IP54 rated, so splashproof rather than full-on waterproof.

The most apparent compromise is in the camera department, however. The 8MP telephoto lens is only slightly different with 2x optical zoom instead of 3x, but the 40- and 20MP cameras have been swapped out for 12- and 16MP sensors, respectively. They serve the same purposes, mind: one wide-angle and one super-wide-angle lens. The Mate 20 also has a regular fingerprint sensor and, alas, it can't wirelessly charge other devices. If your budget doesn't stretch to the Mate 20 Pro, though, you'll still get many of the same core features, just without all the Pro's bells and whistles.