There's also one hell of a grappling hook.

Just Cause 4 arrives at the end of a busy season of open world games. Fortunately, the series has always done things differently from the likes of Assassin's Creed, Read Dead Redemption, Far Cry and the rest. It's the game that coaxes you into causing destruction and explosions, offering a shamelessly hard-boiled physics playground for you cut loose inside. During a lengthy playtime session last week with what appears to be very close to the final game, Just Cause 4 begs to be live-streamed, clipped and shared on Twitch, Twitter, Reddit, Discord and everywhere else.

A force of nature. That's how the team describes both the new elemental forces (tornadoes in four different kinds), and Rico Rodriguez and his super-powered grappling hook. The plot revolves around Rodriguez fighting against a military faction and discovering what happened to his absent dad. Said father is also responsible for the weather manipulating tech that leads to four different tornado climates and biomes to go with them. I got to toy with JC4's vanilla flavored tornado in the grasslands, but the full game will also throw in thunder, sand and snowstorms.

Mother Nature is one of two showcase stars in Just Cause 4.

"The extreme weather, it impacts this world you're in," noted Senior Game Designer, Robert Meyer. The Apex engine, built new for JC4, "embraces it". He doesn't just mean that it tears up everything in its path -- which it does. If you scale a mountain or building high enough, you can you typically pinpoint the destructive column of air on the horizon. It's equal parts reassuring and terrifying. It's that far away, but it's there. Always.

Aside from the grappling hook, which works like momentum-generating Spider-Man-esque webswing, Rodriguez isn't lacking for transport options. You can still commandeer cars, boats, helicopters and planes, which are thankfully easy to drive and even land. I immediately grabbed a lightweight plane and headed towards said natural disaster.

A few minutes later, I flew straight into the tornado, it chewed me out and spat me back out, now aboard a flaming plane carcass.

In attempt number two, I leapt from my plane and readied my wingsuit (which is still a joy to almost-fly in), gliding around the tornado as it pulled (wrenched?) me ever-closer to the epicenter. (There's no eye of the storm that I could spot, so it's pretty much windy destruction in all directions.) With some savvy parachute deployment, you can use the tornado to hurl yourself up into the sky. Even if vehicles are shredded, Rico is relatively impervious to the wind itself -- suspension of disbelief is mandatory in this game. And you really shouldn't care -- that's never been what Just Cause is about. And after too many tantrums over Witcher 3's Geralt dying from a three-meter fall, this is my preferred in-game damage threshold 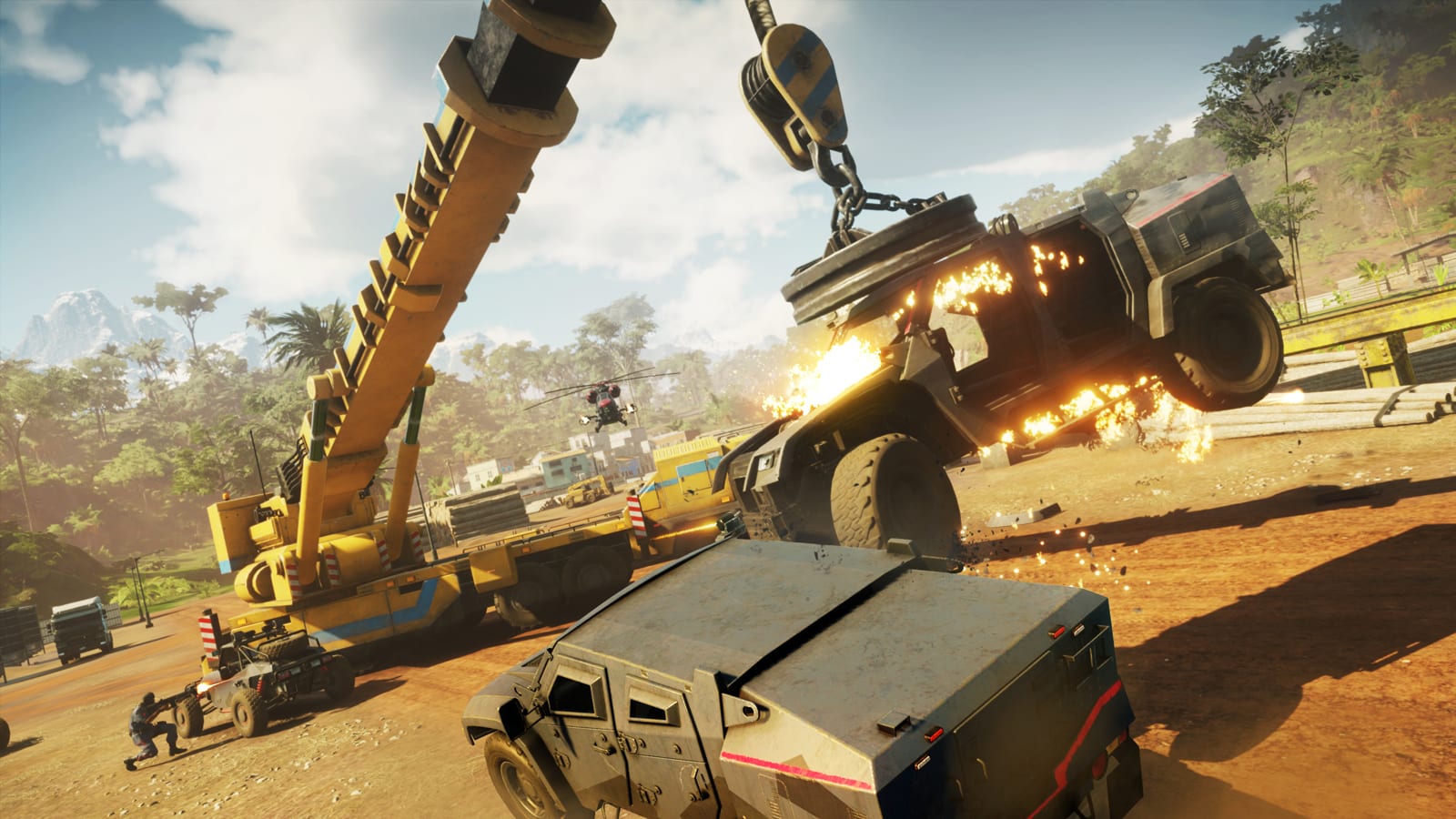 That's not to say there's no grounding in reality here. It's more that game has been made to ensure that it's playable, and repeatable -- Rico can take a lot of damage, and walk away from collisions and explosions that normal humans shouldn't be able to. But, that means you're willing to put him in weirder scenarios, and commit to often hare-brained attack plans against enemy military bases. "There is a logic and a system [to the tornadoes] -- even the thunderstorms. We looked into real weather systems and thought, 'How can we match the reality of this in-game?'." noted Meyer. "And at the same time, how about gamers? What can they do with this?" In JC4, headwinds will slow your character down, while a tailwind will get him to your destination that little bit faster.

While the Just Cause series was never steeped in realism, its worlds are detailed and populated, and its physics rules work the way they should -- albeit with some artistic license. It's not as well realized as GTA's world but did I look at the whole island as a physics sandbox? Yes, there are so many dynamic objects parts to meddle in and experiment with. (My tip: Test out the new grappling hook at the island's theme park.)

That brings me to the second star: Rico's grappling hook. In the last game, players could interconnect objects, buildings and even people, chaining them, pulling them and generally causing trouble, explosions and the rest.

Just Cause 4 substantially upgrades the hook, which can still do all that, but also can attach balloons to send objects into the air, and also booster rockets (which were a separate item in the series' predecessor) which can be tagged to objects.

I have fewer anecdotes than I hoped for from my hands-on time, simply because getting all these functions and parameters to work as you envision takes time.

Now, you switch between these functions through three different load-outs, but they're all initiated and 'released' through the same mixture of trigger buttons. It goes deeper, and slightly more complicated than that. Each of these tools (grapple, balloon and booster) can be modified in slight (or extreme) ways. These range from prescribed heights of your air-lift balloons to burn-out boosters that explode when exhausted. Even the grappling function can be beefed up with higher tensile strength and a 'pulse' finisher that repels the two objects when they come together.

I have fewer anecdotes than I hoped for from my hands-on time, simply because getting all these functions and parameters to work as you envision takes time. The creative freedom is vast and exciting, but the learning curve is a rough one, especially when you're offered the keys to the toy store. I played half my time with the full loadout of features and add-ons for the grappling hook. Fortunately, in the actual game, features will be tiered. As you progress, you'll unlock the balloon function, and earn subsequent mods as you deepen your relationships with fellow rebel fighters.

In its defense, the menu where you customize everything is logical and well laid-out, there's just a high chance that the grappling hook you thought you were making (and the actualities) will be completely different, and that truck you're trying to lift is going to explode in your face. 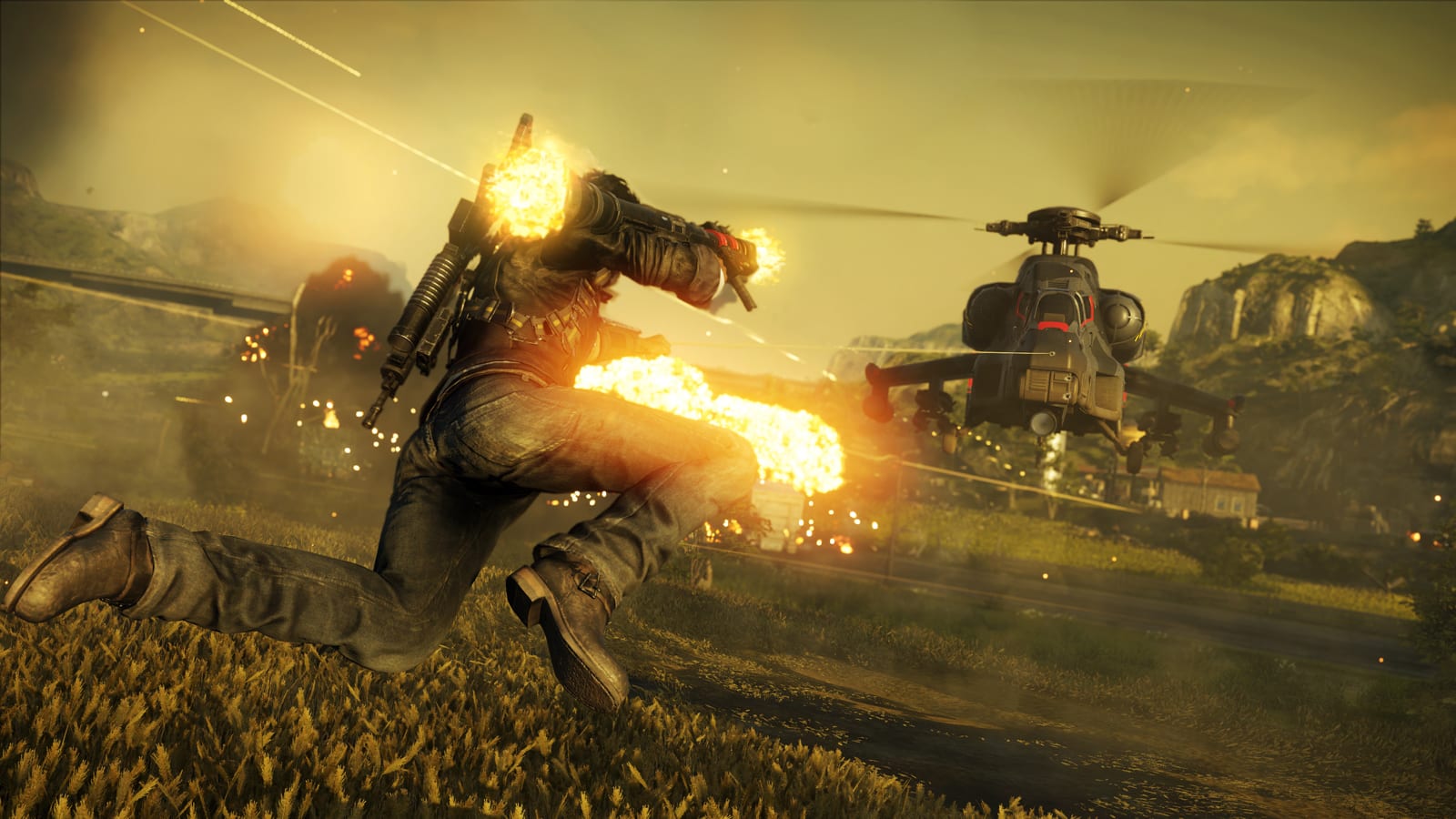 Just Cause 4 introduces an entirely new facet to the series, Frontlines, which has you joining the revolutionary fighters to claim territory. It feels like it'll have a more crucial effect on your playthrough versus, say, choosing Athens over Sparta in Assassin's Creed Odyssey. While red and blue are interchangeable for that mercenary, Just Cause's Rodriguez has picked his side. Frontlines will follow you throughout the game, as you liberate areas of the map, recruit more rebels, and participate at key struggles.

Liberating an area will make for easier travel across regions, and (judging from what I saw) are likely to open up those crucial grappling hook upgrades. Seeing two teams battling along borders -- usually including deployed turrets, rocket launchers and worse -- was nearly always enough to interrupt my journey towards primary quests. I just wanted to help out. That said, it's not the kind of in-game feature easily grasped from a few hours of play.

Given what players were capable of doing with 2015's Just Cause 3, once you get to grips with the hook tool, it's possible for anyone to go crazy with impressive results in this sequel. Add in what high-level players can accomplish with far more limited physics tools in Zelda: Breath of the Wild, and I'm expecting big things. With the boom in game streaming and sharing since JC3 launched, Just Cause 4 is perfectly placed to capitalize on shared clips of ridiculous destruction.

Just Cause 3 had a rough launch, reviewers and gamers criticized rough bugs and some major loading speed issues — especially on consoles. The team had hit a wall with its Avalanche game engine and Just Cause 4 arrives on the new Apex engine, custom-built, and ready for all the tornadoes and grand-scale destruction.

New engine aside, my concern remains how well this runs on my PS4, or your Xbox One. I don't know the answer, as we were playing on pre-release builds running on powerful PCs. To series fans, it might not matter. A lot of us know if Just Cause 4 is the kind of game we'd enjoy already. While there's a narrative here, Rigo Rodriguez is likeable and entertaining, and characters return from the series, I'm not on the edge of my seat to see what happens to them. Frontlines, likewise, adds an extra layer to the game, but my early impressions are that it doesn't feel hugely crucial to the feel of core game. As I parachute into a base, leaping from a truck that's floated above the complex on a handful of balloons, outgunned and outnumbered, it's the least of my worries.

Just Cause 4 launches on PS4, Xbox One and PC on December 4th.