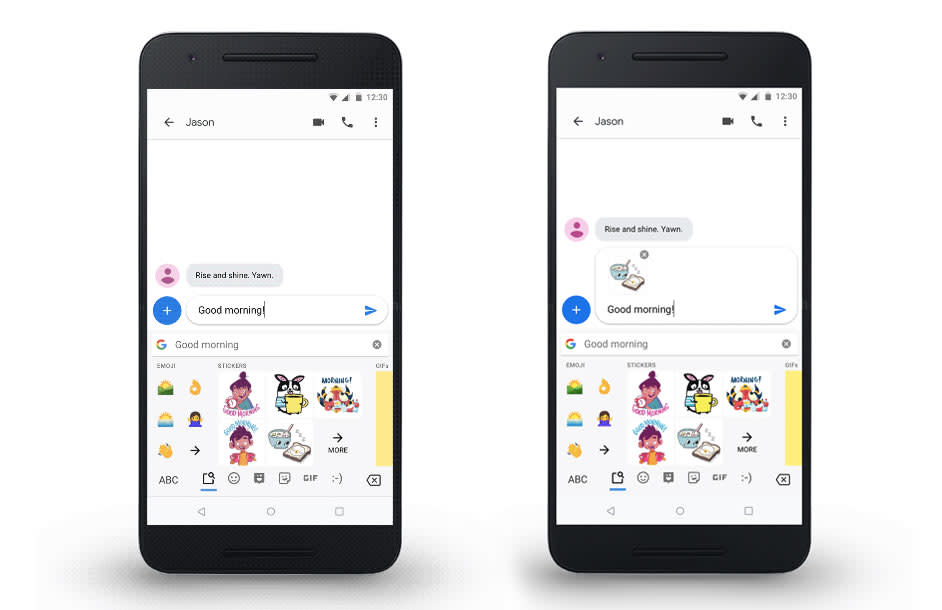 Users of Gboard are about to see their keyboard get a lot smarter. Google announced that its first-party keyobard will use artificial intelligence to recommend GIFs, emoji and stickers based on the context of the conversation you're having. The new suggestion feature will start rolling out today for English speaking users on Android, with more languages to come in the future. Google didn't make mention of the feature coming to iOS.

If you're using the latest version of Gboard, you'll noted a "GIF" icon appear in the top left corner while you're typing. Tap on it and you'll see all of the recommendations that Google's AI has generated for you. Type "I'm sleepy" and Gboard will pull up the sleeping emoji, say "Good morning" and the keyboard might pull up a sticker of breakfast food, and so on.

According to Google, all of the recommendations are generated and processed directly on your device rather than sending the information to a Google server and having it send back its suggestions. This should cut down on the time it takes for the highlighted GIFs and emoji to appear and keep the whole process private.

The infusion of AI recommendations in Gboard seems to have been in the works for some time. Rumors back in September suggested that Google was looking for a way to produce better, faster recommendations for GIFs and emoji within its keyboard. Now it has one. The company has also recently put in quite a bit of time into improving customization and personalization of the keyboard.

In this article: ai, android, ArtificialIntelligence, emoji, gboard, gear, gifs, google, keyboard, mobile, services
All products recommended by Engadget are selected by our editorial team, independent of our parent company. Some of our stories include affiliate links. If you buy something through one of these links, we may earn an affiliate commission.