Will Tesla open up its Supercharger network in Europe?

Retrofitting Superchargers with CCS cables could make it easier for the company to deal with other EV brands.

Yesterday, Tesla announced that its mass-market Model 3 will use a Combined Charging System (CCS) port for slow and rapid charging in Europe. That's different from the modified Type 2 plug that has shipped on Model 3 cars in America and both the Model S and Model X worldwide. In addition, Tesla revealed that it will be retrofitting Superchargers in Europe with "dual charge" cables that support both the Model 3 and older vehicles.

This is a pretty big deal.

As with Betamax and VHS, or Blu-ray and HD DVD, there's a bunch of different rapid-charging standards vying for market supremacy at the moment. CCS is preferred by many European car manufacturers including BMW, Volkswagen and the Daimler group, which owns Mercedes-Benz and Smart. It cleverly combines the Type 2 design -- a standard generally used for slower AC charging at home or work -- with two large DC pins for rapid charging. CHAdeMO, meanwhile, is a competing rapid-charge standard created by the Tokyo Electric Power Company, Nissan, Mitsubishi and Subaru. It's usually fitted alongside a slower AC Type 1 or 2 socket.

Most Tesla vehicles in Europe, meanwhile, support both slow and rapid charging over a modified Type 2 port.

Shipping the Model 3 with a CCS port will boost the standard's popularity and, potentially, relegate CHAdeMO to niche status in Europe. It could also signal a full shift by Tesla to the CCS standard. "We expected that Tesla would abandon its own charging standard eventually, and this looks like the beginning of that," Dale Vince, founder of green energy supplier and UK charging network Ecotricity, told Engadget. "It makes sense -- CCS is a superior standard and looks set to become ubiquitous. It makes less sense to maintain a bespoke approach in the face of what's coming." 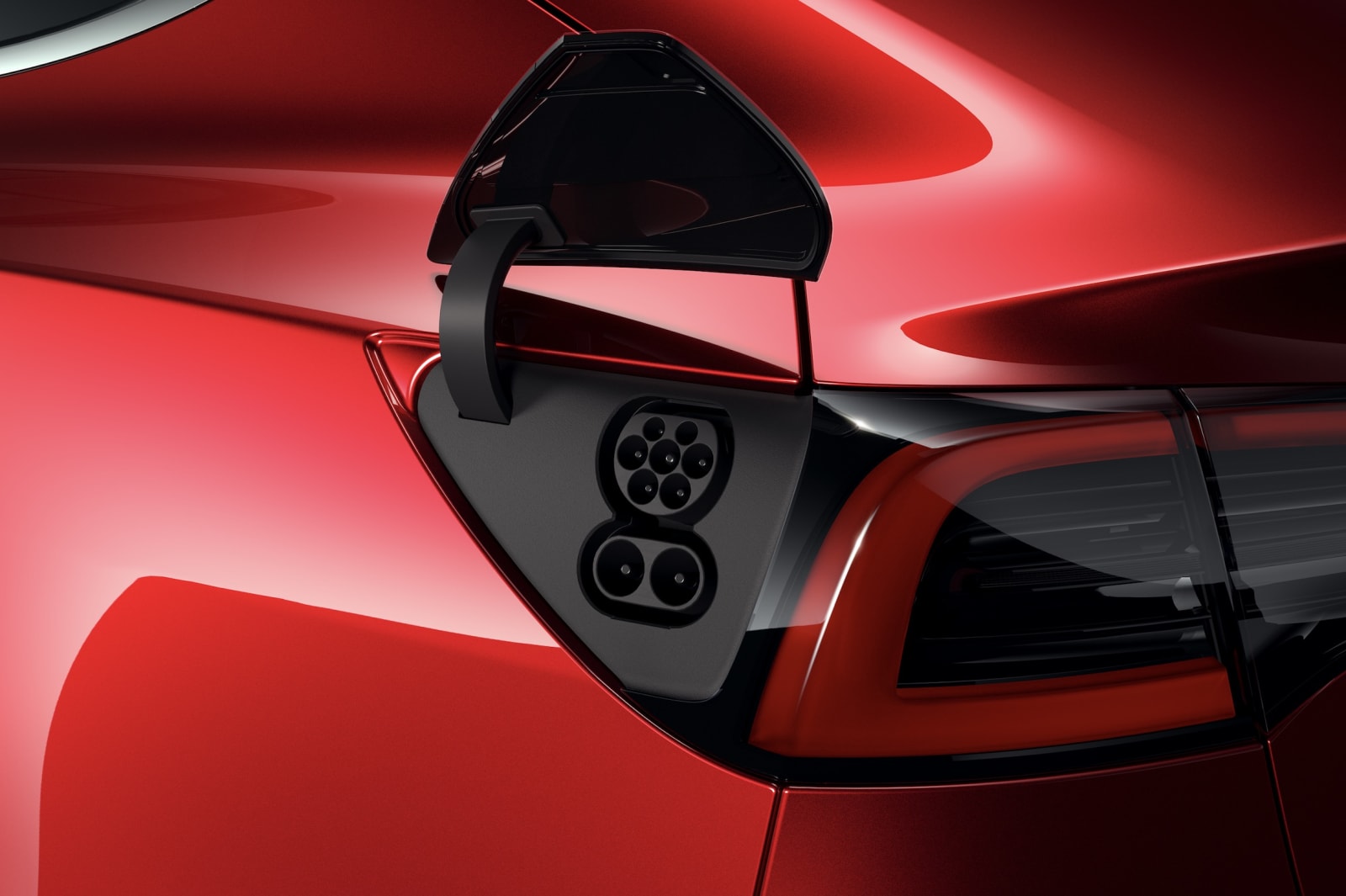 Tesla's Model 3 with a CCS port.

The switch to CCS also makes Tesla's Supercharger network more intriguing. At the time of writing, the company has more than 3,600 Superchargers spread across 430 stations and thousands of Destination Charging sites in Europe. They're an exclusive perk for Tesla drivers -- if you slot a Supercharger cable into a Nissan Leaf, Chevy Bolt or Hyundai Ioniq, nothing happens. The new dual charge cables could, however, make the Supercharger network compatible with all CCS electric vehicles.

Tesla co-founder and CEO Elon Musk has said on multiple occasions that the Supercharger network was never intended to be a walled garden. "We're happy to support other automakers and let them use our Supercharger stations," he said during an earnings call in May. "They would just need to pay -- you know, share the costs proportionate to their vehicle usage, and they would need to be able to accept our charge rate or at least our connector, at least have an adapter to our connector. This is something that we are very open to, but so far none of the other carmakers have wanted to do this. It's not because of opposition from us."

Earlier this week, AutoExpress asked Drew Bennett, head of global charging infrastructure for Tesla, whether the company's position had changed.

"We're definitely open to talking to other car manufacturers who want to have access to the network," he said. "Capacity is a driver for our investment; it's new routes, new markets and then capacity. A lot of carmakers have spoken to us about it, but we haven't had any conclusive discussions on it. They're still trying to figure out what they would need in a network, but we're a couple of years ahead of them in terms of embracing the investment required to transition to electric vehicles."

In short: Tesla is open to the idea, provided it can strike the right deal. 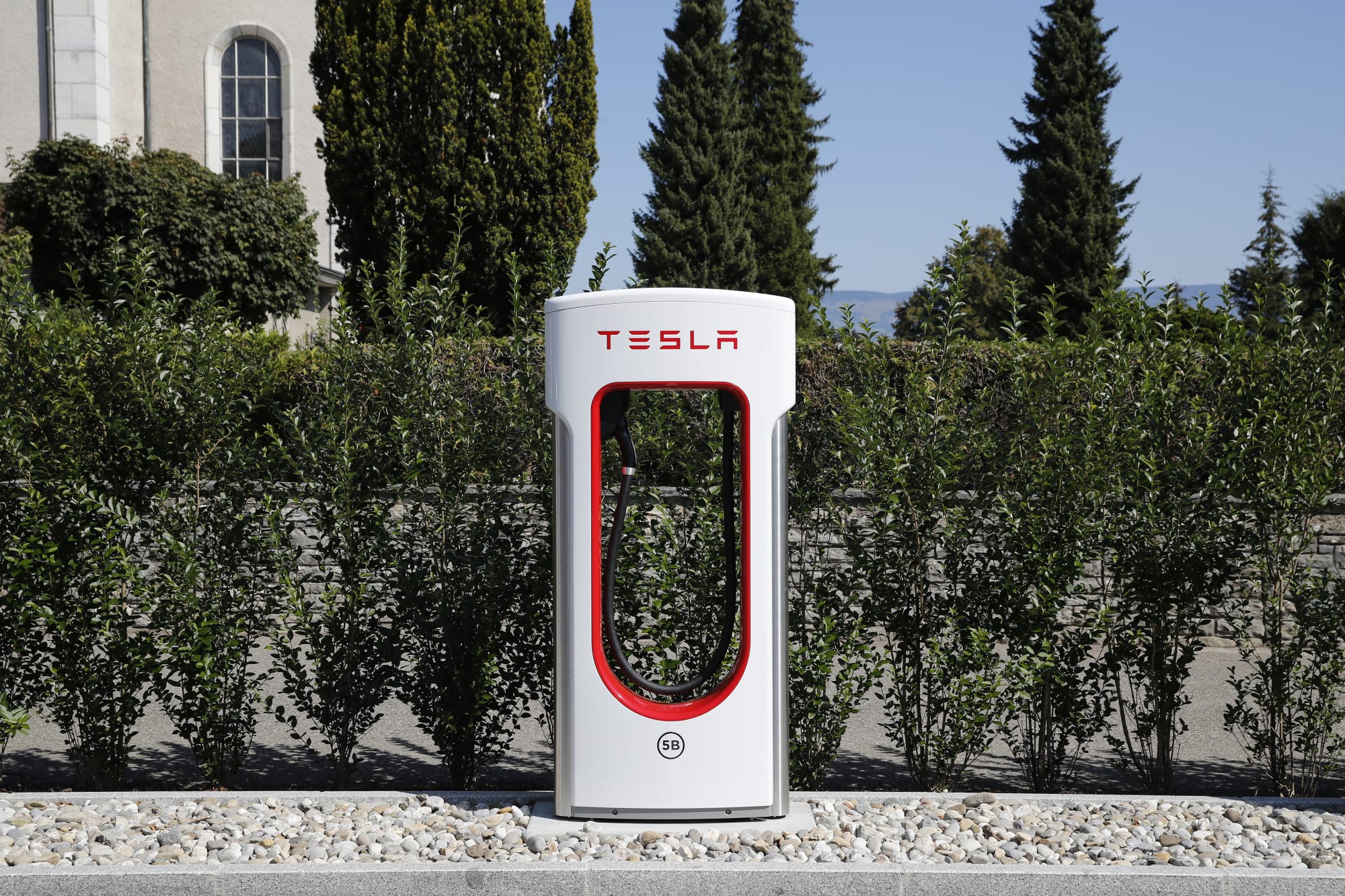 A Tesla Supercharger in Kriegstetten, Switzerland.

Opening up the Supercharger network would give Tesla another source of revenue. The company turned a profit last quarter -- its first in two years -- by increasing production of the popular Model 3; however, some extra cash couldn't hurt moving forward. It would, of course, mean giving up a significant perk that separates Tesla from its rivals. Many would argue, though, that the rest of the Model 3 package, including the exterior design and Autopilot software, is more than enough to compete, if not dominate the "affordable" electric car segment, and that sales wouldn't slow.

The move could also accelerate overall adoption of electric cars in Europe. Musk has long argued that part of Tesla's purpose is to speed up the transition to renewable energy and environmentally friendly forms of transportation. "It's probably fair to say that Tesla has advanced sustainable energy by at least five years, conservatively, and maybe closer to 10, and then if we continue to make progress, we might advance it by 20 years," Musk said in a recent interview with Recode's Kara Swisher. Most people aren't concerned with range and charging infrastructure anymore, but Tesla Superchargers could quell any lingering fears that exist.

"Any increase in the overall provision of public charging points is of course good news for electric vehicle drivers, although it is unlikely to affect electric vehicle uptake, as charging infrastructure is quite simply not a factor that is limiting adoption," a spokesperson for Chargemaster, the company behind UK charging network Polar, told Engadget.

Of course, other car manufacturers would need to agree to any hypothetical deal, too. A BMW spokesperson indicated that the company hadn't discussed anything specific with Tesla but would welcome the opportunity to access a greater number of rapid chargers. It's also unclear whether a deal could ever be struck with companies like Nissan and Toyota that use the CHAdeMO standard. Many companies, including Tesla, offer Type 2–to–CHAdeMO adapters, but the inverse -- CHAdeMO-to-CCS -- is rare.

Tesla and its various rivals now have to decide the value of the Supercharger network. If they can strike a deal, it could have a small but positive impact on sustainable transportation across the continent.

All products recommended by Engadget are selected by our editorial team, independent of our parent company. Some of our stories include affiliate links. If you buy something through one of these links, we may earn an affiliate commission. All prices are correct at the time of publishing.
Will Tesla open up its Supercharger network in Europe?
CCS
CHAdeMO
ElectricCar
ElectricVehicle
EV
gear
Supercharger
SuperchargerNetwork
Tesla
tomorrow
transportation
Type2