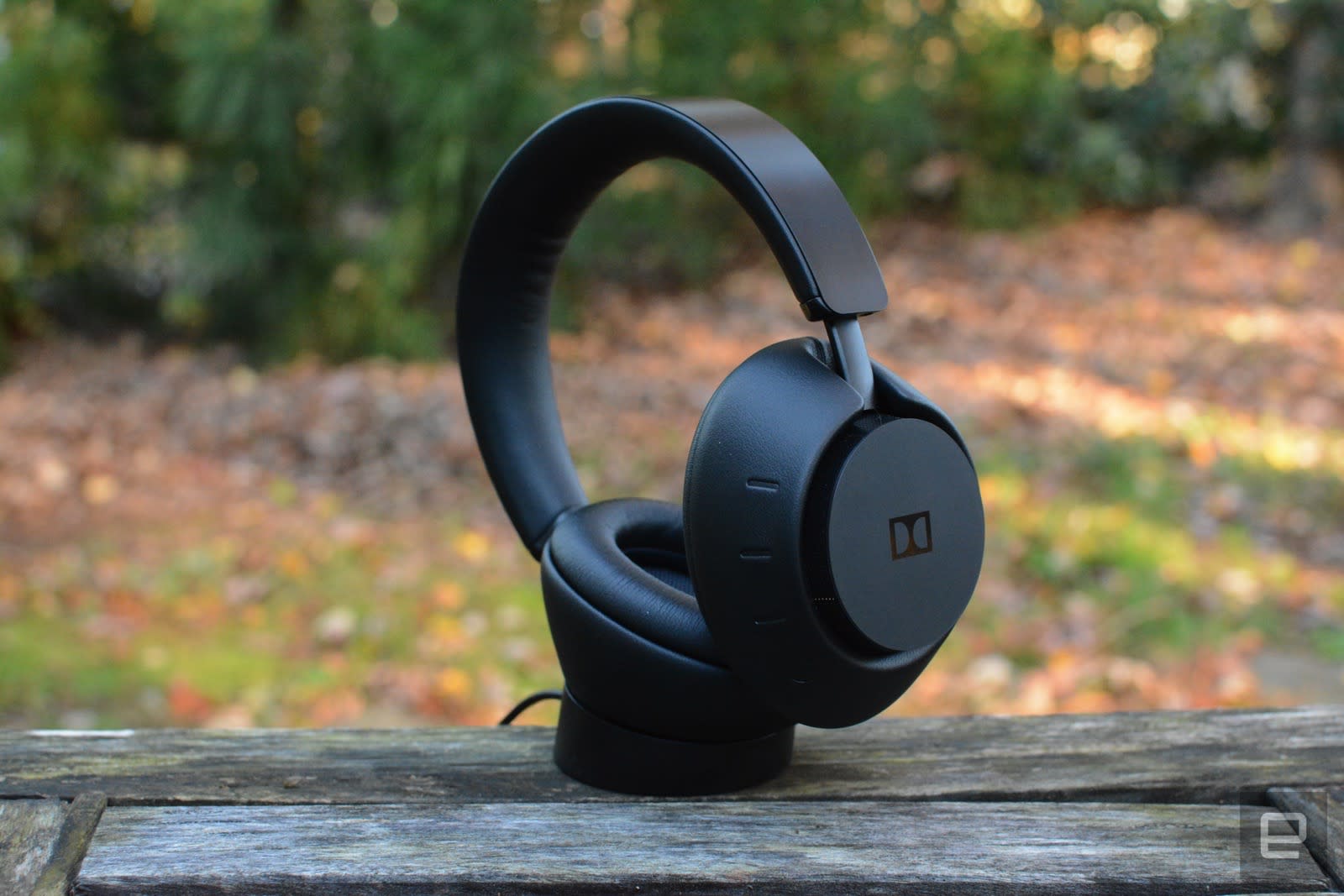 At $599, these headphones are too expensive for most, no matter how good they are.

Dolby has been delivering 3D sound to people's living rooms through other companies' Atmos-equipped soundbars and systems for years. So it's no surprise the company is harnessing some of that expertise for its first piece of consumer hardware. Its first product is aimed at two very popular activities: binge watching and listening to music. The Dolby Dimension headphones pack in a lot of features and tech to power your marathon Netflix sessions, but at $599, they're a serious investment.

Since Dimension headphones are designed for binge watchers, they can't just sound good -- they also have to be extremely comfortable if you're expected to wear them for hours at a time. And Dolby nailed it. The Dimension has a good amount of heft, but it never becomes a burden. Perhaps the softest earpads I've experienced help keep things comfy, and there's ample padding on the headband. The tension on the headband itself isn't too tight either, so even someone with a huge dome like mine can wear them for a couple of hours without any discomfort. My longest stretch during this review was three hours, and even then I felt like I could keep going. The Dimension is insanely comfortable for a set of headphones that weighs as much as it does: 330 grams (11.6 oz).

To achieve this level of comfort, some companies may skimp on materials and opt for more plastic to reduce weight. Dolby did not. There's a mix of metal and leather here like you'd see on most high-end headphones. The Dimension has a tactile feel that screams premium at every edge. Which is good, given the asking price, which is well above those of most "flagship" wireless headphones. Dolby has also packed all of the necessary tech inside of the Dimension, so you don't have to worry about situating a separate base or antenna near your TV to handle connectivity. 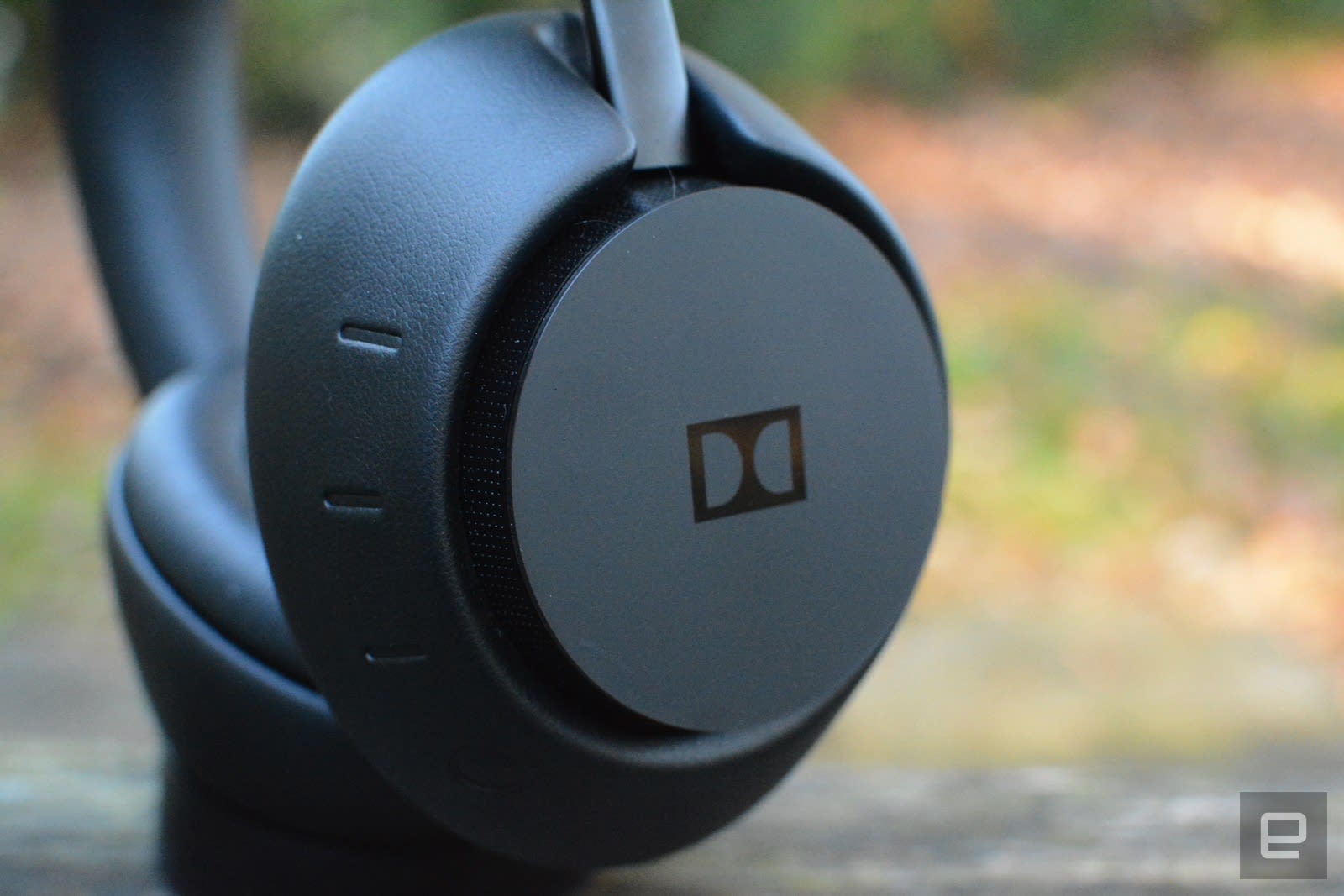 With a number of handy features, Dolby is catering primarily to TV and movie bingers on the Dimension. The first, and perhaps most important, is Cinematic Sound. Driven by a Snapdragon processor, virtualization technology provides a 3D, surround-sound-like audio profile. It's not Atmos, but the Qualcomm chip offers the power needed to do some upmixing (via machine learning) that mimics the company's pristine audio standard. Given Dolby's track record with Atmos, I expected stellar sound quality, and these headphones didn't disappoint. The audio here really shines. It's most evident when you're watching a TV show or movie, where the Dimension pipes in details and clarity that a modest home theater setup might miss.

Don't get me wrong: I have a Sonos Playbar and Sub in my living room, and that combo sounds great. However, there were some subtle audio details in Daredevil that I missed without headphones. Things like camera shutters during a press conference or the nuance of an echoing room may not always be picked up with a soundbar or speakers. The Dimension also does very well with live sports. While watching the recent US vs. England soccer match, I had a better sense of the atmosphere at the stadium. Usually the crowd is a roar the analysts are fighting against. With the Dimension, the two play nice together, creating a much more enjoyable, much more immersive experience thanks to that spatial audio.

The only time I really noticed a stumble was with big shootouts in Jack Reacher: Never Go Back. At times, when the action was extremely hot and heavy, the audio got a little muddy, but that happened only a few times. And, honestly, there was a lot going on in those instances. 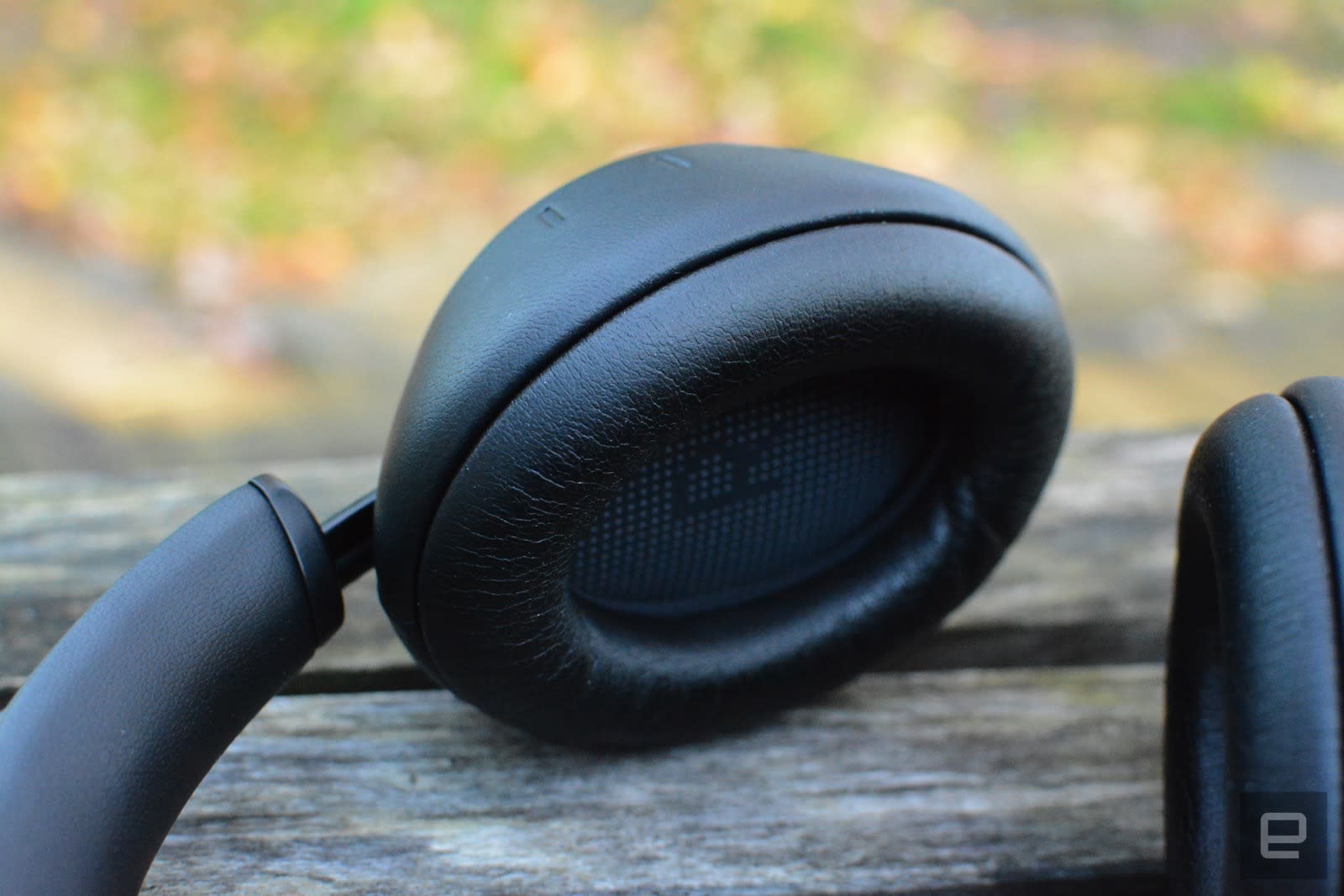 In terms of compatibility with TVs and set-top boxes, Dolby says that so long as the device has Bluetooth, you should be able to use these headphones with it. And if not, there are adapters that might get you what you need. All of my testing was done with an Apple TV, but Dimension will also work well with smart TVs, Amazon Fire TV and other gear. Obviously, that includes your trusty phone or tablet.

Dolby Dimension isn't just for watching television, though. It's also a very good set of noise-canceling headphones for listening to music. One thing you'll want to consider if you're thinking about making these your commute or travel companion is that they don't fold up to store easily in your carry-on or backpack. The earcups don't rotate flat, either. It won't be a deal-breaker if you're using these only at home, but it is something you'll have to think about when hauling them in a bag. There's no 3.5mm jack either, so the old-fashioned corded option isn't available here.

Across a range of genres on Spotify, the Dimension offered crisp, clear audio that's probably the best I've experienced via Bluetooth. Dolby tuned the Dimension so that it handles booming bass from hip-hop and the punchy highs from bluegrass equally well.

Even chugging, grinding metal is less messy-sounding than on most headphones. What I mean by that is that all of the chaos of guitars, drums and screams on Meshuggah's Koloss or Unearth's The Oncoming Storm aren't reduced to one-note noise or a hum. Instead, instruments stand alone rather than blending all together. If I were going to nitpick, I could use a smidge more low end. However, that could cause things like explosions and action sequences in TV and movies to suffer. 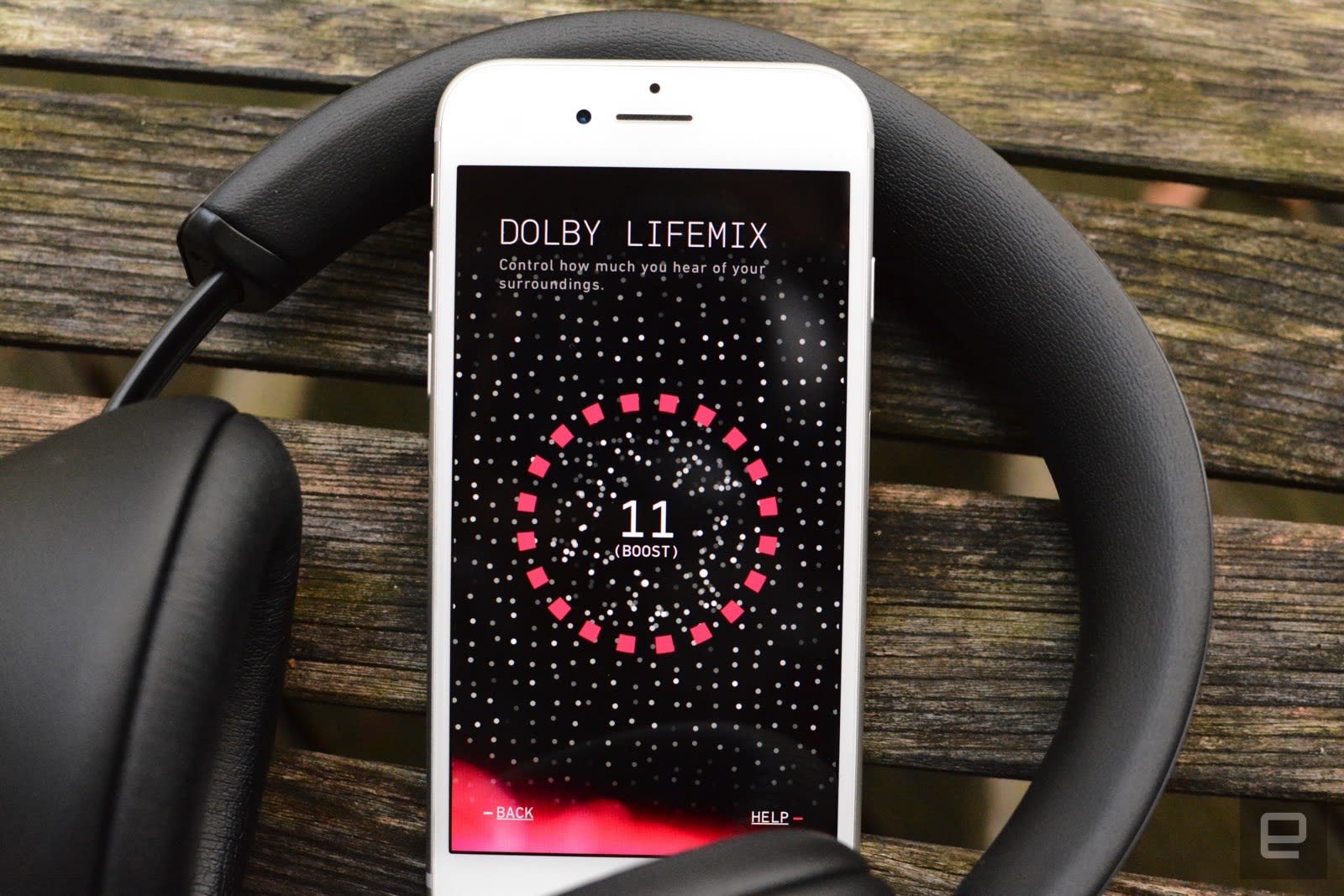 The second big feature on the Dolby Dimension is Life Mix, or what other companies sometimes call transparency mode. But Dolby has fine-tuned this to blend sound from inside and out, rather than just piping in your surroundings. First, you can use the companion app to adjust the level of transparency. Sure, other headphones do this, but it's a nice tool and one that's worth pointing out. Second, the microphones on the Dimension pick up your voice when you talk in Life Mix mode. This means you never have to feel like you're shouting while a show or music is playing in your ears. It may not seem like a major thing, but trust me, it's nice to know exactly what volume you need to speak at, especially when you still have headphones on.

Dolby says it created Life Mix so you could watch TV without completely tuning out your family or significant other, and it works pretty well. If you're like me and have a toddler at home, this feature will help you keep tabs on the little one while listening to something that might be too explicit for young ears. (Looking at you, Vince Staples.)

Head tracking is also part of the show on the Dimension, which enhances overall listening by giving you a better sense for where sound is coming from. For example, if you turn your head to the right so that your left ear is facing the television, Dimension will adjust and put most of the TV audio on the left side. The head tracking also helps with ambient sounds. Not only can you hear what's going on around you, but you can locate those sounds. It really helps you stay present instead of completely tuning out your friends or family. You can turn it off anytime you don't need the added effect. 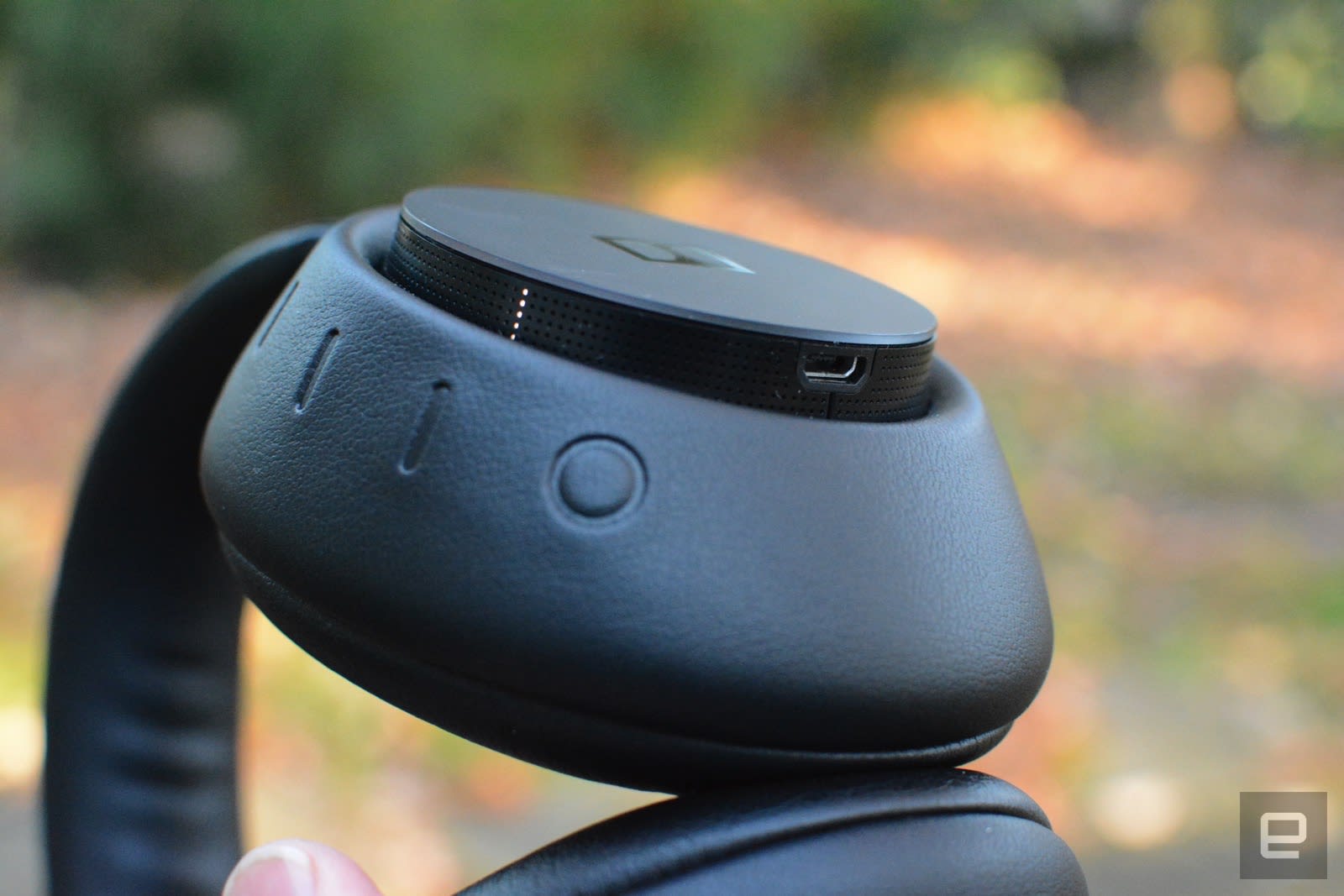 All that audio stuff is great, but my favorite feature is One-Touch Switching. It's a group of three physical buttons on the outside of the Dimension that allow you to quickly change between previously paired devices with a single press. You don't have to put the headphones in pairing mode, swipe over to the Bluetooth menu, select the device and wait for it to pair. Instead, you press a button on the right earcup and in a few seconds it will pair with the assigned device. Trust me, it's magical. And it saves a lot of time and headaches. You can assign one device per button, and the order can easily be reorganized inside the Dimension companion app. The app will also remember up to eight previously paired devices, so you can swap things in that you use less frequently as needed.

Last but not least, the Dimension does offer some onboard controls that will allow you to make adjustments without reaching for your phone or the remote. The outside of the right earcup accommodates touch gestures for play/pause, volume control, next/previous, accepting calls, activating Google Assistant/Siri and adjusting the Life Mix (transparency) level. Again, this isn't that unique, but it's handy.

If there's one area besides price where the Dimension comes up a little short, it's battery life. With active noise cancellation and Life Mix on, you can expect up to 10 hours of listening on a charge. That's about a third of what high-end wireless headphones from the likes of Bose and Sony (our current top picks) offer. The good news is there's a low-power mode that will extend the time to 15 hours, but you'll have to do without ANC and Life Mix. Dolby has packed a lot more tech into Dimension than your typical noise-canceling Bluetooth headphones. Don't forget: there's a quad-core Snapdragon processor inside powering all of the audio tech. So it's easy to see why battery life takes a hit. And whereas many home theater headphones require a base station of some sort to lend a hand, Dolby has nixed that extra piece of equipment entirely. 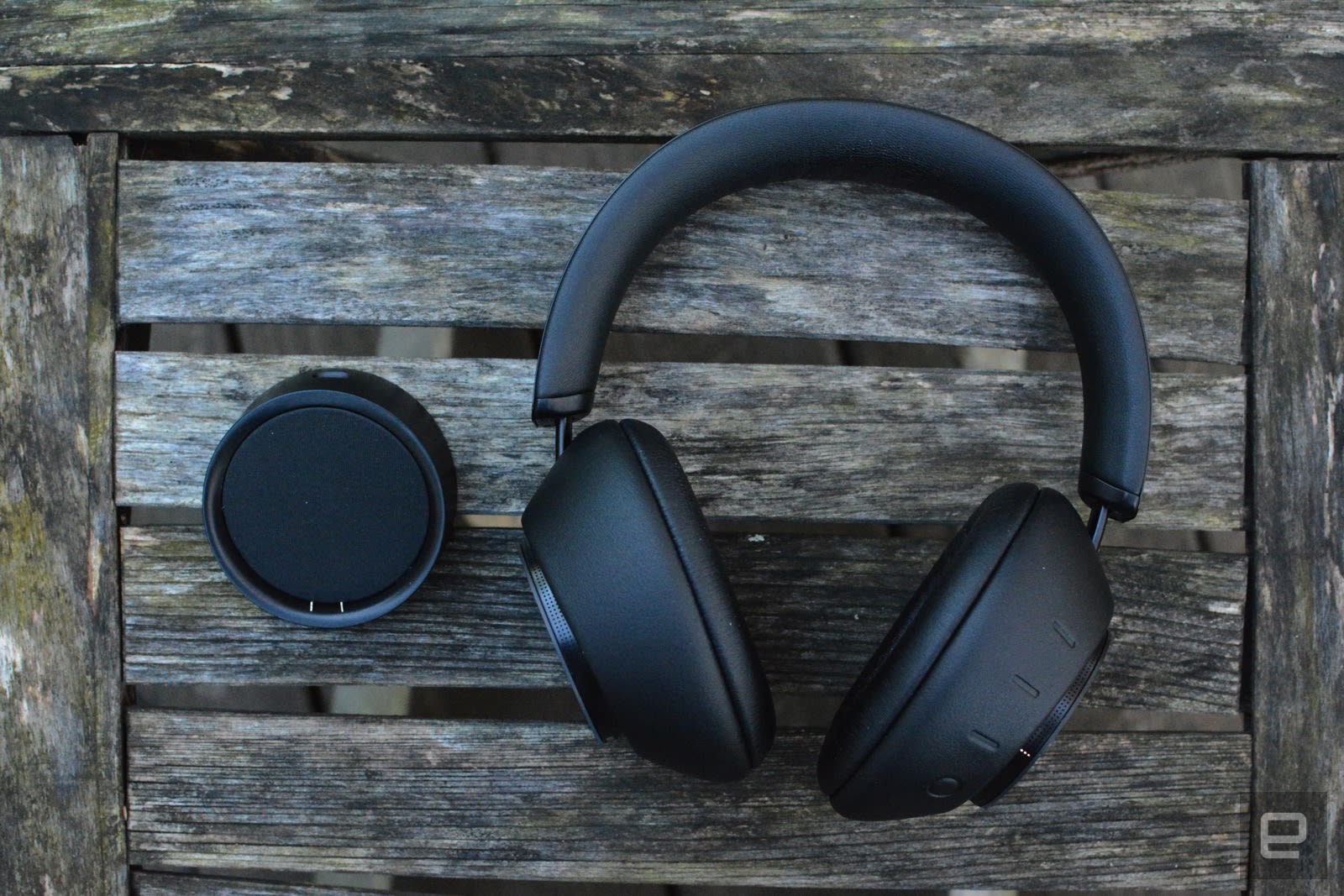 As with almost all new wireless headphones these days, a quick-charge feature will give you two hours of listening time in 15–20 minutes. Though if you want to top them up completely, you'll have to put them on the included charging dock for around two hours. That accessory means you can just sit the headphones down on that and they'll start charging, rather than having to futz with a micro USB cable. You can certainly do that too -- the Dimension has the necessary jack -- but the dock makes things a little less cumbersome.

Dimension is a powerful set of headphones that look good, feel great and sound outstanding, but the price is a bit of a gut punch. At $599, they're a stunning $250 more than our current top pick, Sony's WH-1000XM3. Ditto for the Bose QC35 II, another set of very good noise-canceling wireless headphones. Yes, Dolby has really packed in the features, especially for watching television and movies, but that's a hefty premium over the flagship headphones from other companies.

Don't get me wrong: the Dolby Dimension is impressive. Whether it's picking up on those subtle details during a TV show or blasting crisp, clear audio from Spotify, these headphones really deliver soundwise. And the features, especially One-Touch Switching, make the overall experience highly enjoyable. If you're an avid binge watcher who wants to stay tuned in to what's going on around your home or someone who wants to upgrade their TV audio without putting bulky speakers in their living room, Dimension might be for you. However, spending what you would for an Atmos-equipped soundbar on a set of headphones will be a tough sell for many.

All products recommended by Engadget are selected by our editorial team, independent of our parent company. Some of our stories include affiliate links. If you buy something through one of these links, we may earn an affiliate commission. All prices are correct at the time of publishing.
View All Comments
Dolby Dimension review: Excellent sound, exorbitant price