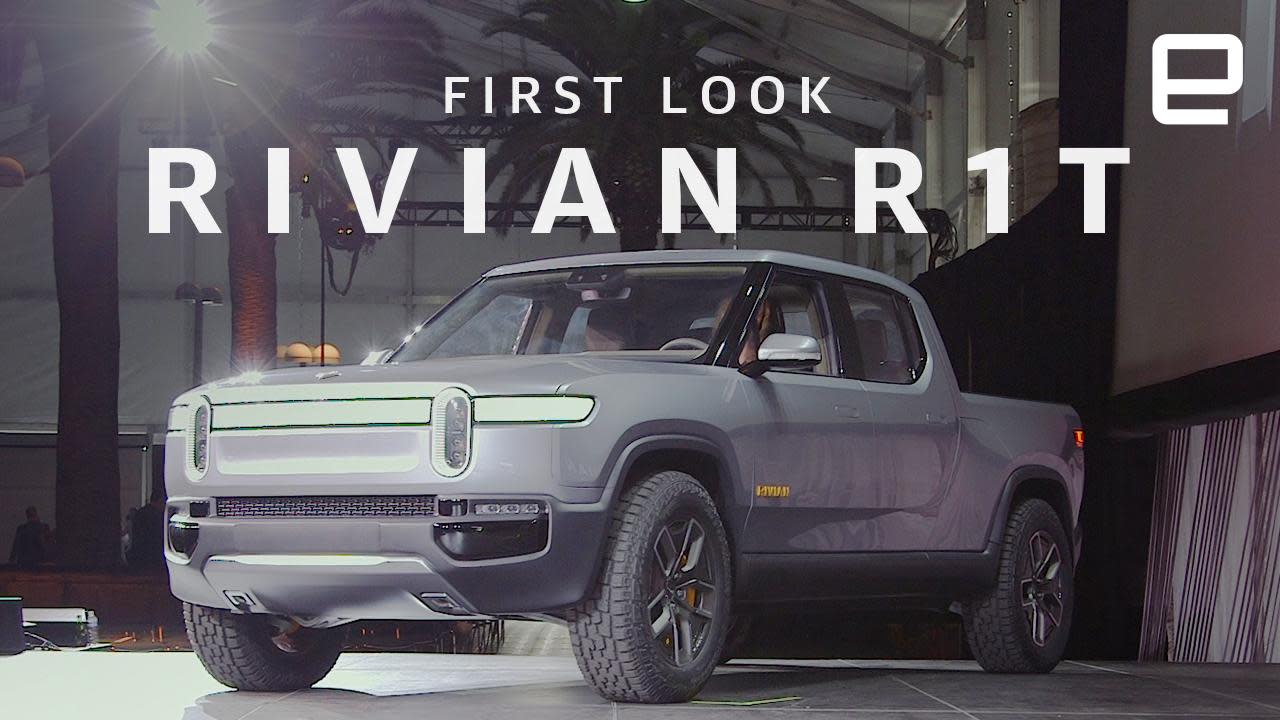 After nine years of design and development, automotive startup Rivian unveiled not one but two new electric vehicles (each with Level 3 autonomy, no less) on Tuesday at the 2018 Los Angeles Auto Show. The R1T is a pickup built specifically for off-road adventuring while the swanky R1S is competing with Range Rover's line of upscale SUVs in both looks and amenities.

Both vehicles are built upon Rivian's "skateboard" frame construction, wherein the entirety of the drivetrain and power storage sit even with or slightly below the frame of the vehicle the same way a skateboard's trucks, spacers, wheels and bearings all sit underneath the deck. This, along with the fact that there is no engine or driveshaft (since the motors in each wheel make it AWD), frees up a huge amount of space for designers to work with. The R1T's hood lifts up to reveal 330 liters of cargo space -- in what the company calls the vehicle's front trunk, or frunk -- the rear cargo bed offers nearly two square meters of flat space in which to pack, and a clever cubby hole (dubbed the gear tunnel) hidden under the rear passenger seats that runs the width of the vehicle offers another 350 liters of space for long objects like golf clubs, hunting gear or ski sets.

"So when you start with a clean sheet, you start to look at where you put different things and how you package the vehicle," Rivian founder and CEO RJ Scaringe told Engadget. "We developed [the skateboard frame] to give us a really low center of gravity and really a high level of performance. So lots of suspension adjustment, a lot of torque, a lot of power." Unlike other luxury SUVs, whether they're gas powered or electric, the five-passenger R1t and seven-passenger R1S are both built to live in the wilds. The Rivians offer a trio of battery packages, ranging from a 105kWh pack with a 220-mile range to a massive 180kWh pack that pushes the range to well over 400 miles. For comparison, the Tesla Model X manages -- at most -- 335 miles with its 100kWh energy-storage system. They're quick too. With the largest battery pack, these vehicles can launch from zero to 60 in 2.8 seconds. That's a tenth of a second slower than the Lamborghini Aventador and less than half a second slower than the Bugatti Veyron Super Sport's 2.4 second mark. And you're doing it in a flippin' pickup truck.

What's more, the Rivians are smart enough to drive themselves. Well, to a degree. Both models will offer Level 3 autonomy (you can take your hands and eyes off the road for short periods while on the freeway) when the R1T and R1S launch in 2020 and 2021, respectively. Even better, they don't even really need roads to drive themselves: They can navigate everything from dirt roads to deer trails without needing the driver to guide them.

"It is actually easier," Scaringe explained. "Because your speeds are relatively low... so your reaction time, your response time is longer, and the level of complexity is a lot lower."

The rest of their specs are nothing to sneeze at, either, what with the R1's 5,000kg towing capacity and ability to scale 45-degree inclines. And since these vehicles don't need to breath like internal-combustion engines do, they can drive through up to a meter of water without issue. Disclaimer: Don't be stupid and think that this gives you a pass to ford across flooded roadways. Don't drown, turn around.

Despite being well appointed with dual touchscreen monitors acting as both the instrument cluster and infotainment system, the Rivian vehicles are built to spill... or rather built for spills, as the seats, carpeting and floorboards are designed for easy cleaning. I especially dug the built-in air compressor on the R1T. Using air from the suspension, drivers will be able to top off the pressure on their 4x4s, mountain bikes and inner tubes without having to drag along a separate compressor and current inverter.

The R1T is slated to cost $61,500 and the R1S $65,000 with applicable tax credits, depending on options and battery sizes, when they go on sale at the start of the next decade. They'll be produced here in the US -- specifically at an old 2.6-million-square-foot Mitsubishi plant that the company acquired and converted for its use.

"We'll start in the thousands of units, and we'll ramp," Scaringe said. "And then we have four other products on the skateboard, which we haven't shown yet, all of which speak to this idea of adventure and exploring, have a lot of functionality, a lot of performance, a lot of efficiency, of course, being electric architecture, that we'll be showing over the coming years."

Granted, 2020 feels a lifetime away, and there's a good chance that Rivian could flame out like Faraday Future did before any of its vehicles actually hit the road. But if these folks are successful, I have no doubt that they'll revolutionize the electric-vehicle market in ways that Tesla has only dreamed of.

In this article: adventuretruck, AWD, ElectricVehicle, EV, frunk, gear, laautoshow2018, pickuptruck, R1S, R1T, Rivian, skateboard, SUV, tomorrow, transportation
All products recommended by Engadget are selected by our editorial team, independent of our parent company. Some of our stories include affiliate links. If you buy something through one of these links, we may earn an affiliate commission.