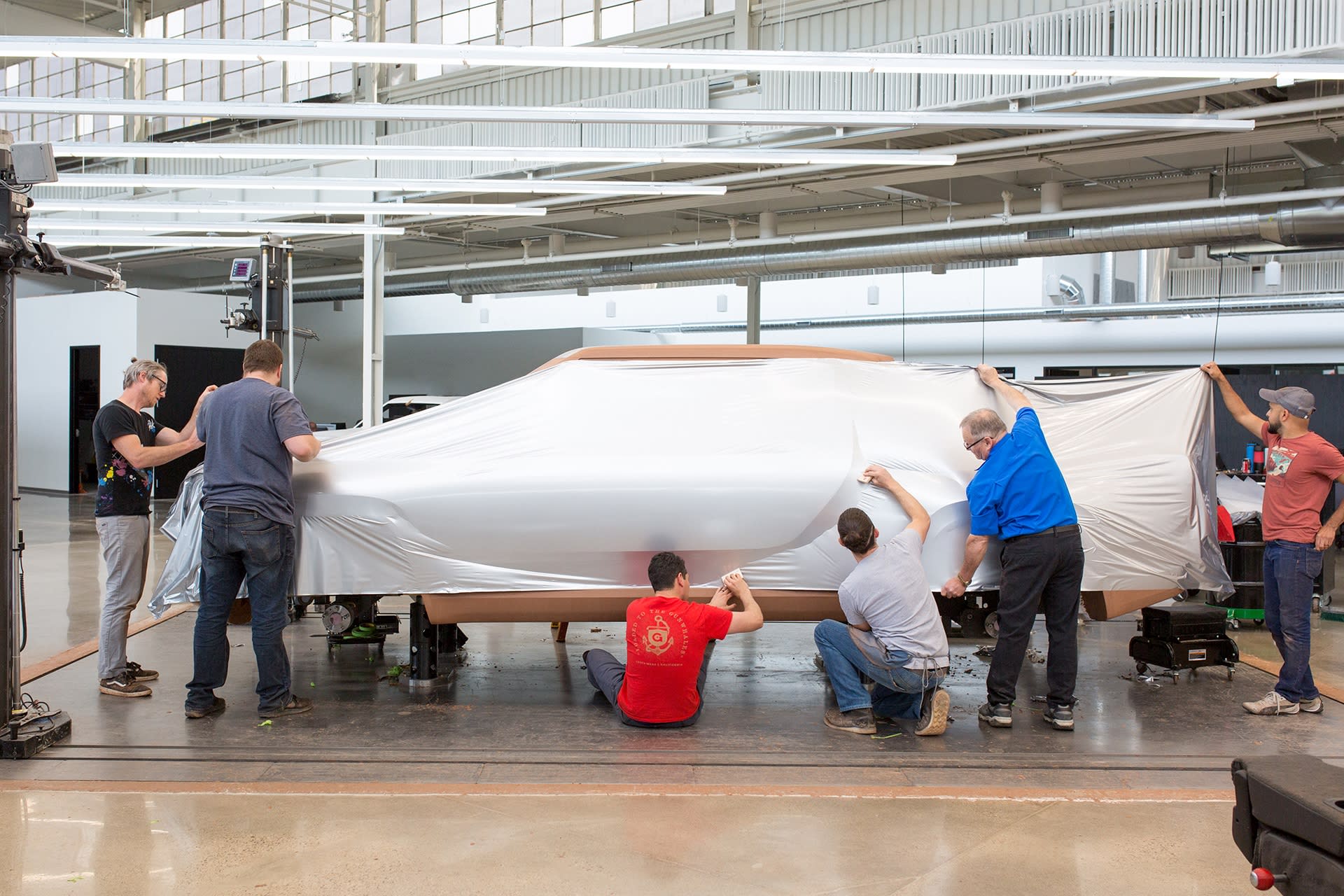 Competing against Tesla is foolish. Why not build an electric truck instead?

The Tesla Model X is the "least capable SUV ever made," according to Rivian CEO RJ Scaringe. It sits too low to the ground, for one, and yet, somehow, most American garages aren't tall enough for the rear doors to open. It's something that looks great sitting next to a Lamborghini or a Porsche, but it's more style than substance. It's an SUV in name alone. You won't take your Model X to ride the sand dunes for a weekend, but that's precisely what Scaringe wants you to do with anything his startup makes.

It's understandable if you don't know who or what Rivian is. The company, founded in 2009, has around 350 employees, and its executive team is composed of designers and executives from Hummer maker AM General, Chrysler, McLaren and others. Its design headquarters are located outside of Detroit; there's also a pair of tech and research centers in California split between the San Francisco Bay Area and Irvine.

Rivian is led by Scaringe, a 35-year-old MIT grad. Previously he founded Mainstream Motors, working on a fuel-efficient vehicle before pivoting to EVs in 2012. Even more than other tech companies, this one's plans have been shrouded in secrecy -- it was important to Scaringe that his company have something to show before making promises he couldn't keep.

In Scaringe's mind, there's too much competition in the luxury sports sedan market for a company like Rivan to stand out. Not only are you going against Elon Musk, but also a handful of Chinese manufacturers like GAC and Faraday Future, as well as traditional automakers like BMW. Instead, Scaringe would rather occupy a space that's relatively devoid of alternative-fuel vehicles: off-road.

In January, Jaguar Land Rover reported record sales domestically, but admitted that 90 percent of its Land Rovers would take a hit at home thanks to an impending UK diesel tax. It's easy to see why Rivian is keen to jump into the market, then. Unfortunately for Scaringe and team, though, Land Rover's EV off-roader is expected to hit the market a year before Rivian's first model.

In 2020, Rivian will launch its A1T, a fully electric pickup truck with seating for five adults. If everything goes according to plan, a year later the startup will release the A1C, its version of an SUV. The pair won't be revealed to the public until November, at the Los Angeles International Auto Show, but Rivian recently invited me to its design headquarters outside of Detroit for an early look.

The A1T and A1C have been designed by and for outdoorsy types. Scaringe boasted that the A1T can handle 1.1 meters (3.6 feet) of water, has more than 360mm (14 inches) of ground clearance and will be capable of climbing 100-percent-grade (45-degree) inclines. Rivian claims it'll out-handle a Porsche Cayenne Turbo, too, and that it has a zero-to-60 time of 2.8 seconds, running at wide-open throttle for a maximum 20 seconds before the batteries get too hot.

"It's stiffer than a supercar," Scaringe bragged. "There are only a few cars in the world that are going to be as fast as ours, and we have a large five-passenger truck." Lamborghini and Porsche each make a model that can go from zero to 60 MPH in less than three seconds: the Aventador SV (2.4 seconds) and the 918 Spyder (2.2 seconds), respectively. Boasting about specs is par for the course for automakers -- startups especially -- but few have actually followed through when it comes to manufacturing. Tesla still can't meet the production numbers Musk bragged about in the run-up to the Model 3, for example. Faraday, meanwhile, is under serious investigations for its alleged non-payments to vendors and employees.

Pricing isn't final, but when Rivian's A1T launches, it could cost as much as a well-appointed F-150 at the low end ($50,000), or a Range Rover on the high end ($90,000). Scaringe says that keeping a narrow focus on the high-end off-road market, where Range Rover has dominated, allows Rivian to provide best-in-class batteries, controls and autonomous systems.

The more you spend, the more power and range you'll get. The base battery pack is rated at 80kWh, or around 200 miles of range, and the base motor will go from zero to 60 in less than five seconds. The most expensive models will reach around 450 miles on a charge and feature the 800HP electric motor Scaringe said would beat Italian supercars. While the A1T and A1C are officially Level 3 autonomous (hands off the wheel, eyes off the road in highway situations), they'll also feature extra options like automated trailer backup for when you're getting your boat out of the water.

Photography was prohibited during my behind-closed-doors meeting, so the following description will have to suffice for now: The A1T looks like a vehicle ripped straight out of Halo. Designers were putting finishing touches on life-size clay models during my visit, but the general shape and body lines matched the concept sketches hanging on the walls. 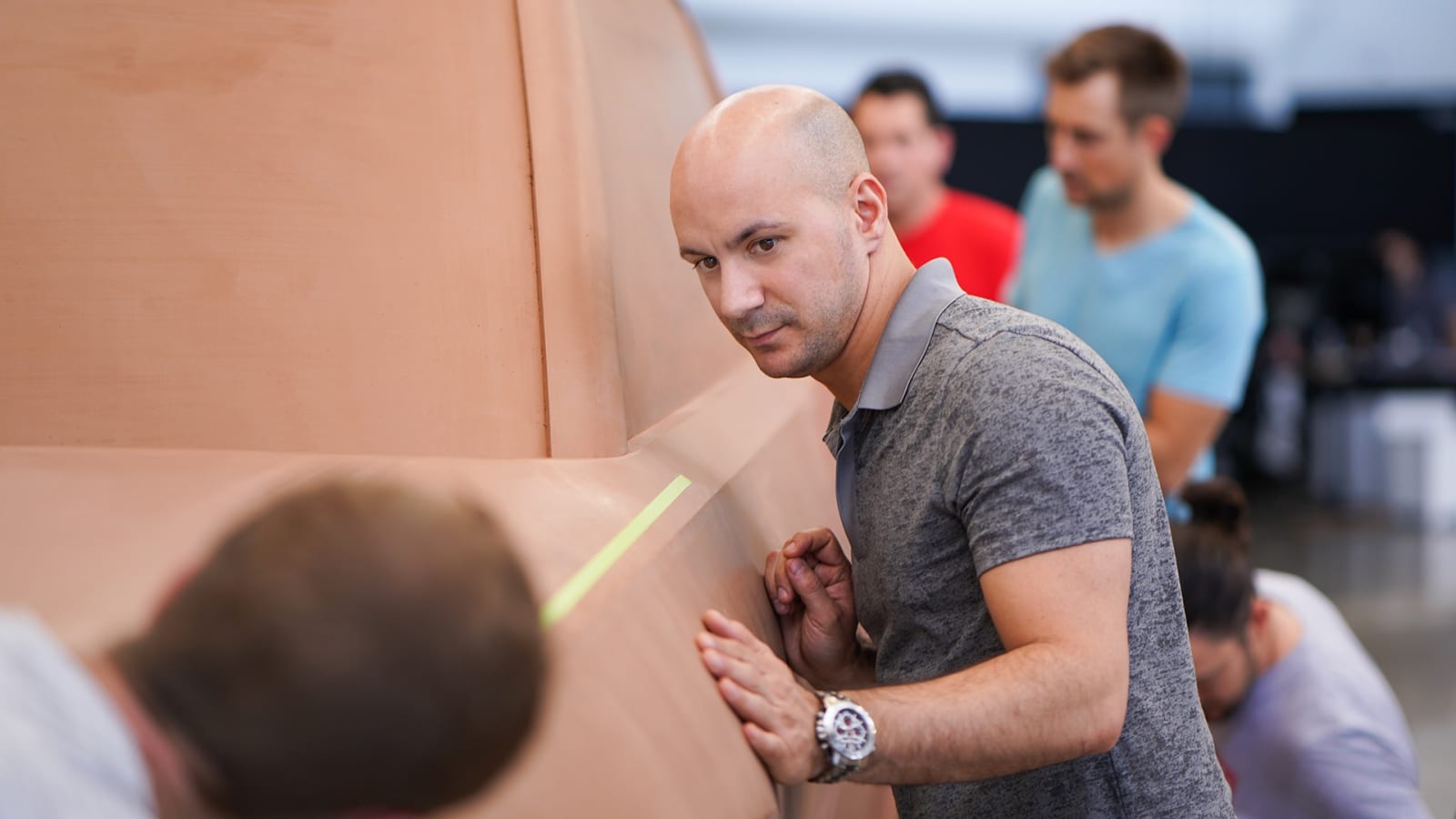 For the car nerds out there, it's more Honda Ridgeline than F-150 in terms of size and shape, except it has aggressive angles and big, blocky panels sitting atop the four meaty tires. And, like the Ridgeline, the four-door truck is a unibody design, meaning it doesn't have a separate frame or bed. Any needed flex for off-road adventures is in the suspension, not the frame, Rivian says.

Where a grille would typically sit is a narrow horizontal light bar with a pair of vertical pill-shaped headlamps on each end. Below that is a small opening for cold air, which you'd be forgiven for thinking was a foothold for working under the hood. Where the engine would normally reside, you'll instead find a roomy storage spot. Just behind the rear doors is a locked storage compartment running the width of the truck, which is accessible via powered fold-down doors, each capable of handling more than 400 pounds. The idea is to give you something to stand on when loading your gear onto the roof without having to jump on a tire or in the bed. Speaking of the bed, the A1T's tailgate opens a full 180 degrees to allow for easier loading.

The heart of the A1T and A1C is the chassis, or "skateboard." It's named thusly because it's a flat piece of metal on four wheels. It contains the motors, battery pack, wheels and electronic controls that push the company's EVs down the road. Unlike on a traditional truck or SUV, you don't have a differential, oil pan or transmission hanging below the frame, and this is what gives Rivian's trucks their flat undercarriage and impressive ground clearance. The A1T and A1C share 91 percent of the same components as a result of this common chassis, which Scaringe thinks will be key to Rivian's success. The skateboard and body components are being assembled at an Illinois plant that previously built Mitsubishi cars. That a startup would manufacture its vehicles domestically is curious for a few reasons. First, uncertainty around trade agreements like NAFTA has been looming for years. A reversal could adversely affect an established automaker's supply chain, to say nothing of a startup like Rivian, whose production scale measures in thousands, rather than millions.

Labor costs are also higher here than abroad. That hasn't deterred Scaringe, however. "Domestic manufacturing is not something that makes it impossible to be profitable in the market here," he said. Scaringe added that China isn't as cheap as it used to be for labor. Plus, once a Chinese-built vehicle is finished, you still need to ship it halfway around the world. As such, Scaringe says that, wherever you're selling, it makes more sense to manufacture locally.

Unions are another reason automakers might choose to manufacture abroad. After all, Rivian has a location in Detroit, a historically pro-labor city, and its manufacturing plant is a few hours away from another blue-collar metropolis: Chicago. Tesla and many other tech companies are vehemently anti-union, often claiming that organized labor stifles innovation and drives up costs. Rivian employees haven't unionized yet. As the company grows, Scaringe said it will work with employees and the local community to "determine the best course of action" in terms of organized labor.

Ready and waiting. Our battery modules have passed end-of-line testing and are ready for installation in our prototype vehicles. #Rivian #EV pic.twitter.com/p0XS5dVN6p

Scaringe has plans to license the chassis out to others, similar to what BMW does with its i-Series. That's in addition to offering its AI-controlled battery cells to agriculture and commercial companies like John Deere that need electrification but don't want to sink millions into developing their own platforms.

Scaringe says that, unlike other mobility startups, Rivian isn't angling to be acquired. The company has a plan for fully autonomous vehicles based on its skateboard platform, in addition to second-gen models of the A1T and A1C. He encourages his team to "have fun" and imagine what the future of the platform may be, and designers have already dreamed up concepts like an off-road motorcycle.* He wouldn't mind Rivian becoming a tier-one supplier along the lines of Bosch or Fisher, though, with its chassis and batteries powering everything from school buses to flatbeds and forklifts. "We're going to be working very hard to get the battery module into as many things as we can," Scaringe said.

Rivian's 2020 launch target is just over 18 months away. In that time, the company needs to finish drivable concept vehicles for the LA Auto Show, build demand for its luxury off-road trucks, open a Tesla-like dealership network along the coasts and earn consumer trust. Scaringe is pragmatic about the latter. He says Rivian has been operating in stealth mode for the past six years to keep public expectations low. Now, six months from Rivian's world debut, with nearly finished models and a finalized chassis, Scaringe is ready to start talking. The question is whether anyone will listen come November.

*Update: This article has been updated to clarify Rivian's concept work on dirt bikes. We apologize for any confusion the original text caused.