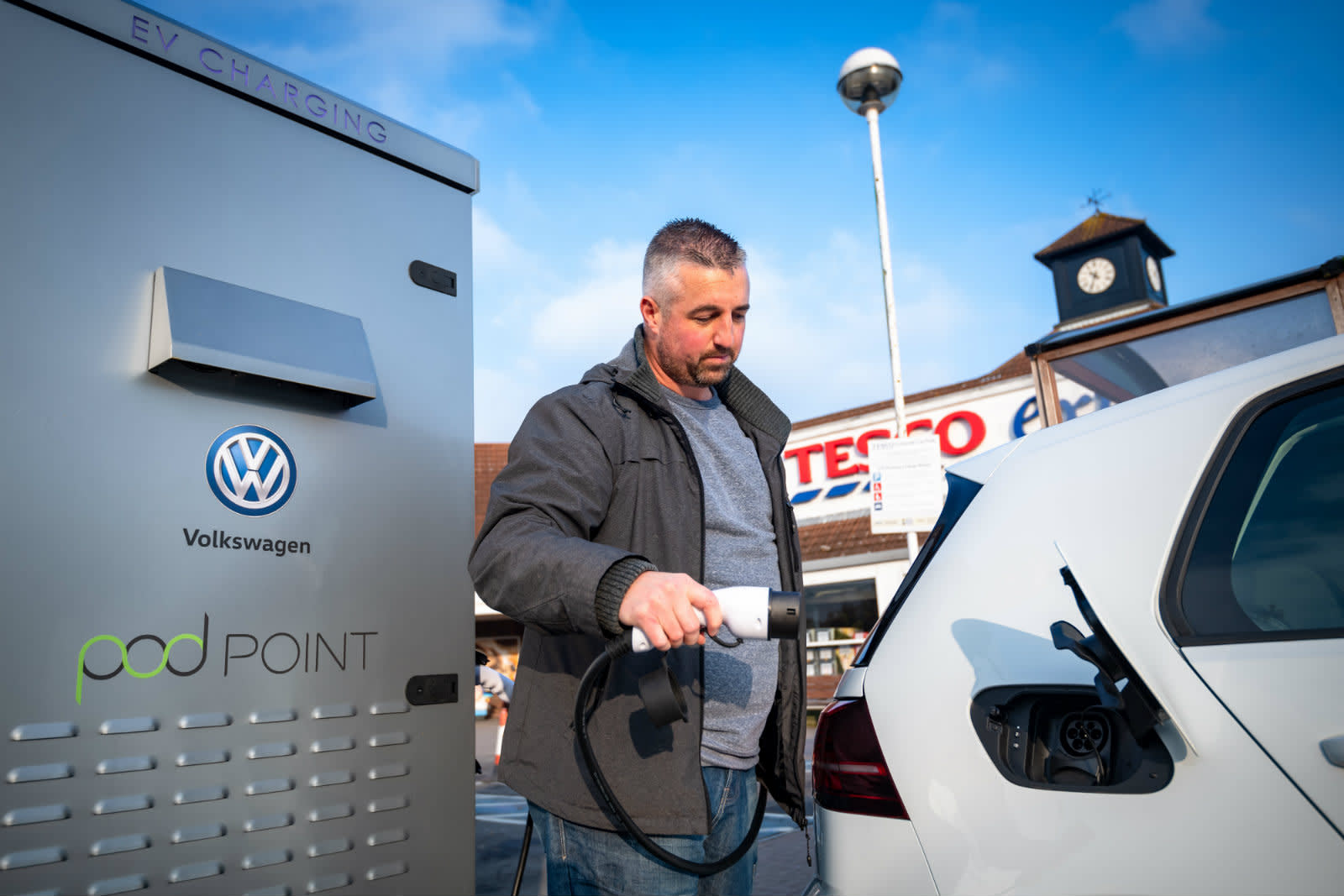 The UK's EV charging infrastructure is getting a huge boost courtesy of a new partnership between the country's biggest supermarket chain, Tesco, and Volkswagen. They're joining forces to install 2,500 charging bays at 600 Tesco stores by 2020. Customers will be able to charge their electric cars using a standard 7kW fast charger for free, or pay to use the 50kW charger. The charging bays will be installed by the UK's largest independent public charging network operator, Pod Point.

Tesco is hoping people will leave their electric vehicles to charge while they shop at its Tesco Extra and Superstore outlets. The chain also happens to be the UK's largest fuel retailer, with 500 petrol stations dotted around the country. One of the incentives it offers shoppers is discounted petrol, which should also appeal to those who own an EV, like a Tesla or a LEAF, and want to top up their fuel points like their gas-guzzling counterparts.

Rival supermarkets Sainsbury's, Morrisons and Asda also offer charging stations at select stores, but nothing to match the scale Tesco is promising. The new partnership will see the number of charging bays in the UK increase by 14 percent. There are currently more than 13,000 public charging points where you can juice up your batteries, which is five times more than in 2011.

As for VW, it recently announced plans for a modular electric car platform, with its fully-electric I.D. model to be the first car to benefit from it. The German auto-maker already sells an e-Golf and e-Up in the UK and has plans to launch a whole new line-up of EVs by 2025. Among those cars is an upcoming all-electric Tesla rival with a fiercely competitive price tag of $23,000.

The UK declared last year that it will eliminate sales of new gasoline- and diesel-powered cars by 2040. In the summer, the government pledged to bolster the country's EV charging infrastructure by requiring new homes, street light posts and businesses to have charging points. On top of that, the National Grid previously proposed a countrywide network of superfast charging points that would mean 90 percent of motorists would always be within 50 miles of a charging station.

In this article: ElectricCar, ElectricVehicle, EvCharging, EvChargingStation, gear, tesco, transportation, volkswagen
All products recommended by Engadget are selected by our editorial team, independent of our parent company. Some of our stories include affiliate links. If you buy something through one of these links, we may earn an affiliate commission.