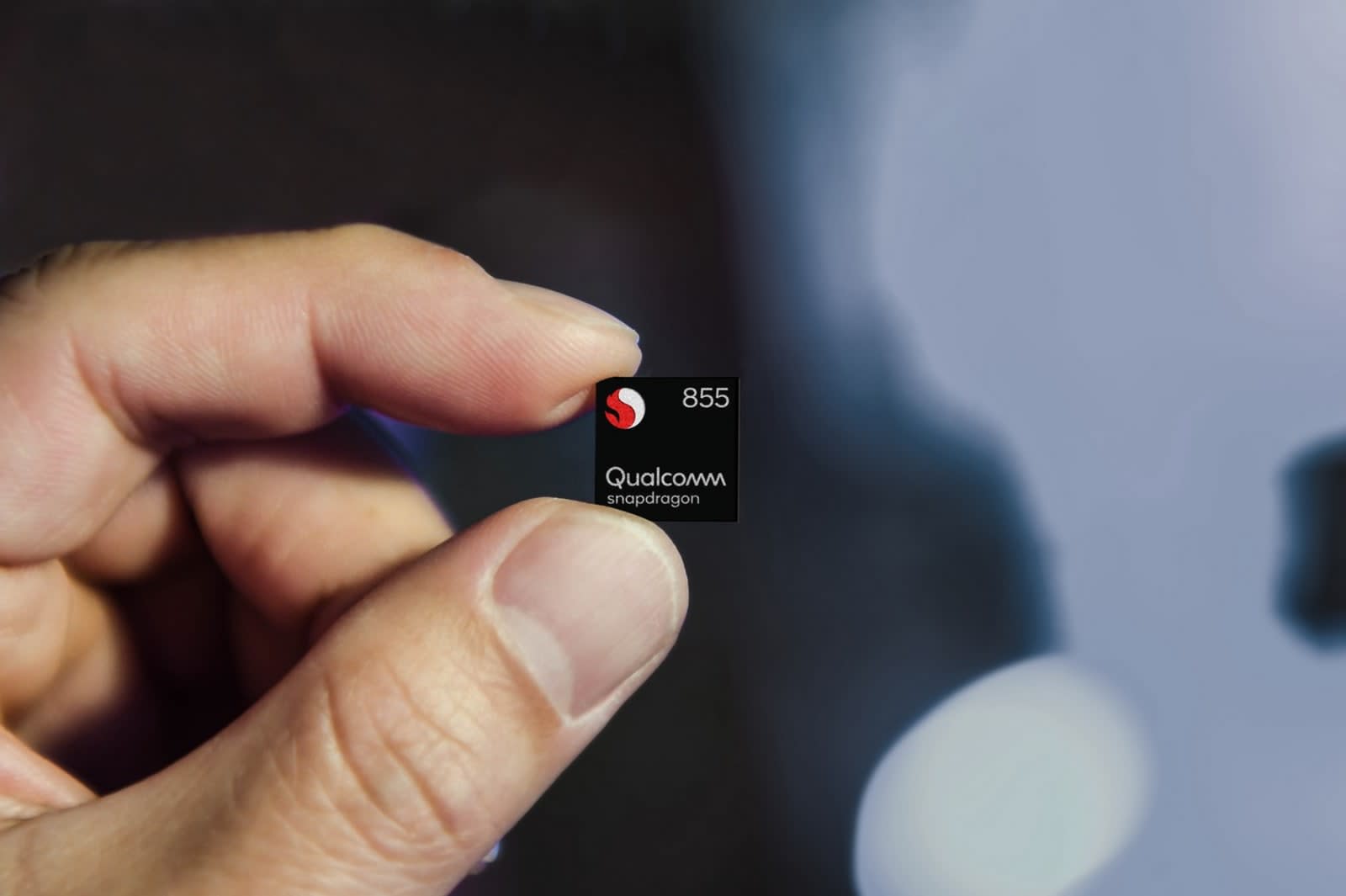 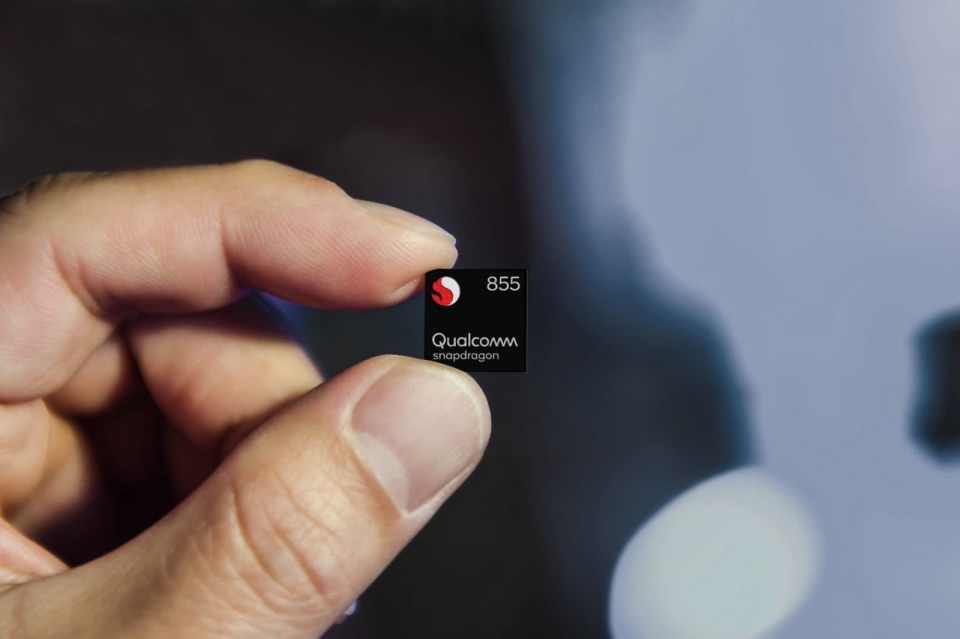 As we hurtle towards 2019, Qualcomm has been busy introducing the world to its latest products that are likely to drive next year's biggest trends. At the first keynote of its three-day Tech Summit in Hawaii yesterday, the company already previewed some of the features of its next premium mobile processor -- the Snapdragon 855. Today, we're getting a deeper dive into the nitty gritty details of the new chipset. To be clear, there are a lot of highlights here. This is the first mobile processor to support multi-gigabit 5G, and is one of the first chips built on 7-nanometer architecture. The Snapdragon 855 also features (among other things) advances in AI processing and graphics prowess -- let's take a closer look.

For all of Qualcomm's talk abut 5G, the 855 is fascinating because it mainly relies on a new, built-in X24 LTE modem, not the Snapdragon X50 5G modem we've heard so much about lately. The X50 enables millimeter wave (mmWave) support for transfers over recently opened mmWave frequency bands, which can provide up to 20 times faster average performance than what you'd get on today's phones and networks. The thing is, device makers will ultimately decide whether or not they want to offer hardware with 5G-enabled 855 chipsets -- just buying an 855-powered phone doesn't mean you'll get access to those crazy data speeds.

Regardless of your 5G situation, you still might see some important data speed improvements. The Snapdragon 855 will also support WiFi 6 (also known as 802.11ax), which promises to bring about increased throughput and faster speeds. Qualcomm's using features like 8x8 sounding to serve more devices more efficiently, and promises up to two times improvement over 4x4 sounding. The new CPU will also support mmWave WiFi via Qualcomm's 60 GHz platform, an industry-first 802.11ay-based offering that can boost speeds up to 10 Gbps.

Wireless earbuds also get an upgrade, thanks to improved support for Qualcomm's TrueWireless Stereo Plus technology that's supposed to optimize for low latency between left and right earbuds and improve energy efficiency for longer battery life.

Qualcomm also continued to work on its AI-processing prowess, and the Snapdragon 855 comes with the company's 4th generation multi-core AI engine. It's supposed to be capable of more than 7 trillion operations per second and offer three times the AI performance over the 845.

Perhaps more important is the new Hexagon 690 processor on the chipset, which includes a tensor accelerator and four vector extensions to double the vector processing prowess. Qualcomm has been talking up the value of machine learning applications being used in tandem with 5G connections, but we're looking forward to seeing how the company's improved AI hardware stacks up to the competition. The GPU also has 50 percent more arithmetic logic units, while the Kryo CPU received new instructions to speed up AI processing. All told, AI tasks like facial recognition or context-based suggestions should be much faster on the Snapdragon 855.

We're a world obsessed with cameras and the Snapdragon 855 will provide some photography updates that could improve next year's phones. The chipset features a new Spectra 380 image signal processor (ISP), which integrates hardware-accelerated computer vision to speed up tasks like object recognition. Qualcomm says this is the world's first announced computer vision ISP and that it should provide up to 4 times power savings.

The Spectra 380 supports hardware-based depth-sensing to enable video recording, object classification and segmentation in real time at 4K HDR at 60 fps. What that means is the Snapdragon 855 is powerful enough to distinguish between people and a scene's background and even apply filters or green screen-like effects to your video in real time. This will all happen in the viewfinder as you're recording your video. That's a lot of data to process at once in real time, but the Snapdragon 855 is up for the task (according to Qualcomm anyway).

The Spectra 380 will also support video recording using the popular HDR10+ standard to capture more than 1 billion shades of color. To better store all this data, the Snapdragon 855 also features hardware acceleration for the HEIF file format encoding, making files 50 percent smaller. Oh, and beyond all that, the Snapdragon 855 supports capture images from multiple cameras at the same time.

In addition to helping next year's flagships capture high-quality content, the Snapdragon 855 will also have the chops to show it all off. With the new chipset, Qualcomm is introducing the Snapdragon Elite Gaming experience, which will support gaming in "true HDR" and offer physically based rendering to recreate textures in games by drawing from readily available templates. Mobile games have already gotten almost startingly close to console game quality -- well, graphically, anyway -- and physically based rendering should make that gap even smaller.

You can also expect HDR10+ playback on Snapdragon 855 devices, which Qualcomm notes is a commercial first on mobile. Beyond that, we're also looking at improved H.265 and VP9 decoding (thanks to some handy hardware acceleration) -- the specs themselves might not mean a whole lot to you, but long story short, your new 855-powered phone should let you watch videos for longer on a single charge. And the sheer horsepower available here means we'll start to see volumetric virtual reality (VR) immersive video experiences running at 120fps and at resolutions up to 8K. We've hit a point where the VR industry lacks the sort of buzz it generated just a few years ago, but throwing more power at the situation definitely can't hurt.

On paper at least, Qualcomm's Snapdragon 855 chipset seems like a potent mix of clever architecture and sheer computing power, two things that have become all too important as we demand more from our phones. The thing is, Qualcomm has always talked a big game -- thankfully, we won't need to wait too long until we get to see if the company can actually deliver the goods.

In this article: gadgetry, gadgets, gear, mobile, qualcomm, snapdragon, snapdragon855
All products recommended by Engadget are selected by our editorial team, independent of our parent company. Some of our stories include affiliate links. If you buy something through one of these links, we may earn an affiliate commission.