This 'brutally and surreally immersive' project brought the filmmaker to tears.

Camp Fire, the tragedy that killed at least 85 victims and destroyed around 14,000 homes across Paradise, California, continues to torment as residents start returning to the ruin as of yesterday. News channels around the world have been offering a sober look at what little is left behind the walls of fire, but not long after disaster struck, former Lytro exec Steve Cooper already sensed the need to capture a proper first-hand account of this unprecedented catastrophic event.

With help from his firefighter friend at the scene plus CAL FIRE's media team, the filmmaker eventually arrived in Paradise on November 13th -- day five of Camp Fire -- with his SUV and 360 camera to commence his two-day shoot. The result was the aptly named Aftermath, a seven-minute 8K 360 video documentary now available on YouTube.

Cooper described the whole project as incredibly intense from start to finish. As you can see in the video, Cooper slowly drove through smoky neighborhoods that were practically leveled, leaving the odd metallic or concrete structures and bits of cars under charred trees. And this was only the tip of the iceberg; Camp Fire scorched over 153,000 acres of land, a scale I struggled to visualize.

"You could see across multiple neighborhoods in every direction; an uninterrupted view that would have been impossible before the fire," Cooper told Engadget. "What was chilling was to see massive steel gun safes which were sagging like they were made of wax and left out in the sun. And it was utterly quiet."

Even though I had already seen similar but flat footage on TV several times, seeing such scenes in 360 was a far more emotional experience for me, especially those moments when Cooper got off his Toyota 4Runner to stand his Insta360 Pro on the ground. (For those who are interested: The camera was mounted on a Moza Guru 360 Air stabilizer on the car, and it was moved to a Bushman Panoramic CoreLite VR monopod for the stationary shots.) That's pretty much what the residents will be seeing when they eventually return, possibly in those same spots. And that's assuming they can even find their way back to their flattened homes. 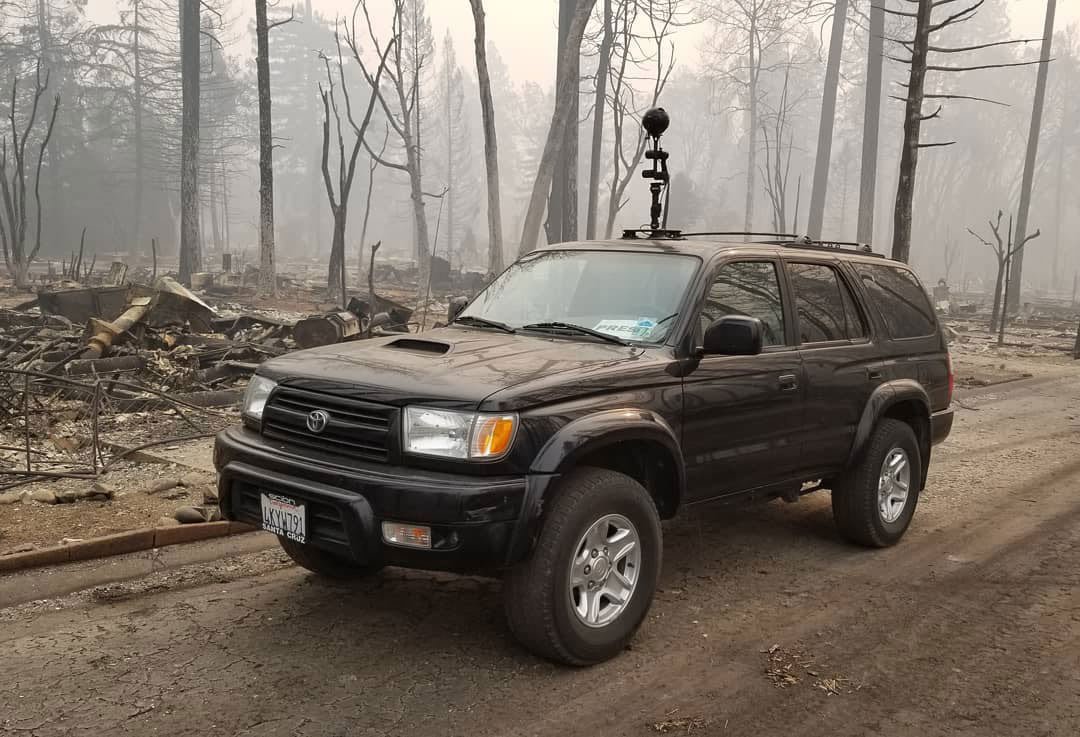 Unfortunately for Cooper, he also bore the emotional task of helping a couple of friends track down three homes belonging to their relatives. He ended up having to share photos of two completely destroyed homes, and worse yet, he could not locate the third one.

Adding to that brutal experience was the fact that Cooper had to re-watch the harrowing clips while editing. "I cried," the filmmaker admitted. "It was so brutally and surreally immersive it brought back those disconnected emotions." He also urges viewers to donate whatever they can to support the victims.

Despite the emotional challenges throughout this project, Cooper said he now has a new-found desire to look for stories that would help build understanding of the plight of others. He's also been developing remote control rover platforms for taking dolly shots in 360, so we may well see another VR documentary from him using this tech.