... but it's going to be a rocky transition for the fanfiction community.
J. Conditt|12.11.18
@JessConditt

If you lose your copy of Brave New World, it's simple to replace the entire story, word for word, by buying a new version of the book from Barnes & Noble or borrowing one from the library. If your home is burglarized by a bibliophile and every book you've ever owned suddenly disappears in the dead of night, you'd still be able to rebuild that collection with relative ease. There might be a few you couldn't replace -- an old, strange tome that once called your name in the back of a dusty second-hand bookstore; faded covers stamped with out-of-print authors; the only copy of your grandmother's memoir. Barnes & Noble doesn't stock these stories in its back rooms. They're lost forever.

Fanfiction is your grandmother's memoir. Fanfic authors craft original stories using existing characters from just about any franchise imaginable; popular ones include Harry Potter, The Avengers, Sherlock Holmes and Attack on Titan. These stories can be hundreds of thousands of words long, spanning volumes and years, and in general, they're infused with romance. Fanfiction allows writers and readers to pair off characters who don't actually get together in official storylines. And because much of mainstream media focuses on heterosexual scenarios, fanfic often involves gay relationships, love and sex. 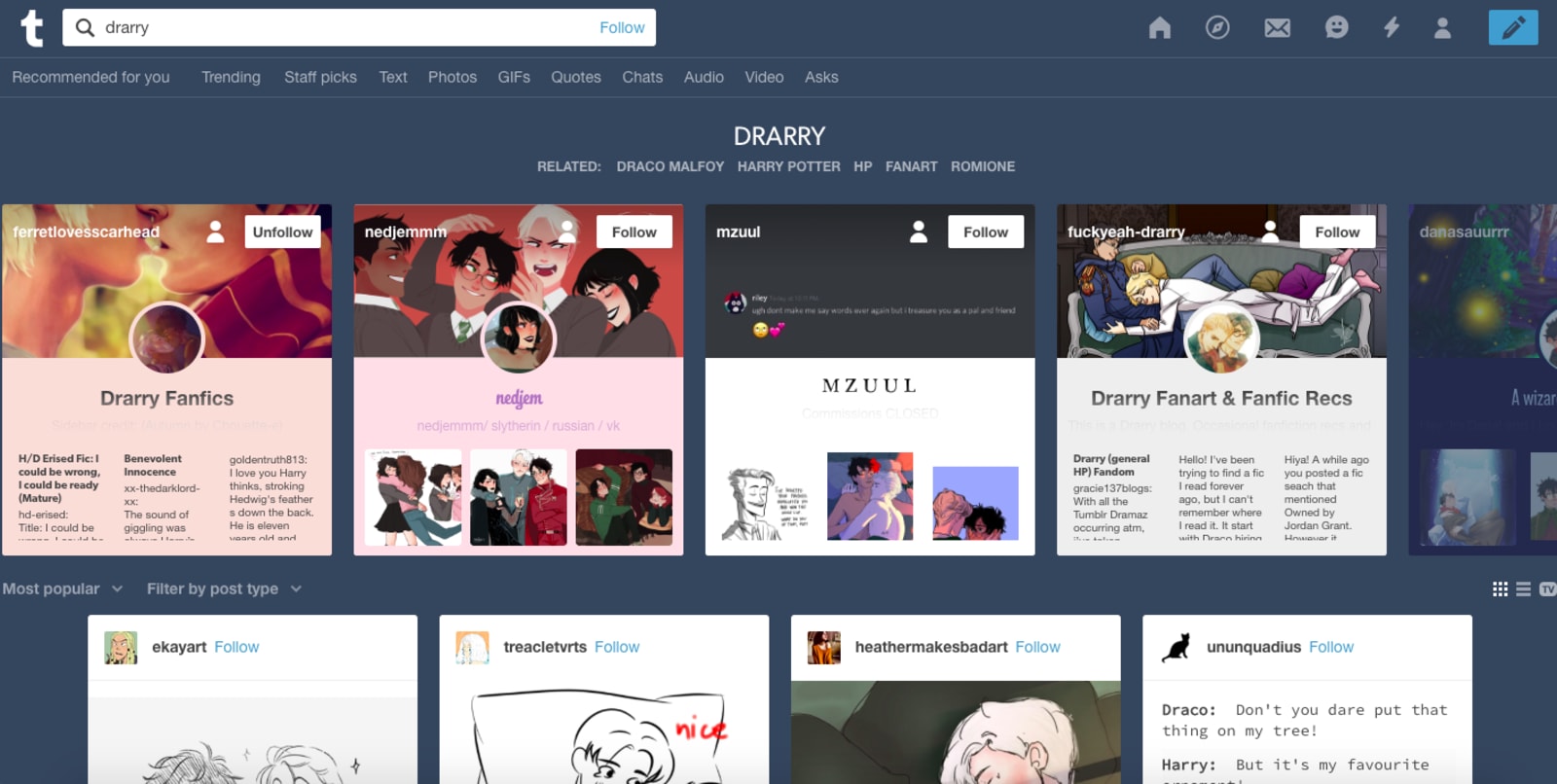 "Fanfiction is a way for people who are not being shown themselves in stories to shove themselves in there, and just go, 'OK, I am real. I do get to have adventures,'" Hugo Award-winning author and fanfic writer Seanan McGuire said. "Fanfiction lets queer people and queer creators center queer characters in stories that aren't just about sex."

There are few rules in fanfiction. These stories exist wherever authors decide to host them, whether that's on a personal blog, in an online community or uploaded to an archive site. If an author gets bored while writing a piece about Harry Potter and Draco Malfoy's illicit trips to a Hogsmeade nightclub, that story might simply stop halfway through. If the hosting site goes dark, that story might disappear forever.

For nearly 10 years, Tumblr has been a repository for fanfiction and a gathering place for writers and readers. Users regularly post stories rated G to NC-17, accompanied by artwork, narrative podcasts and videos in the same vein, altogether known as fandom. 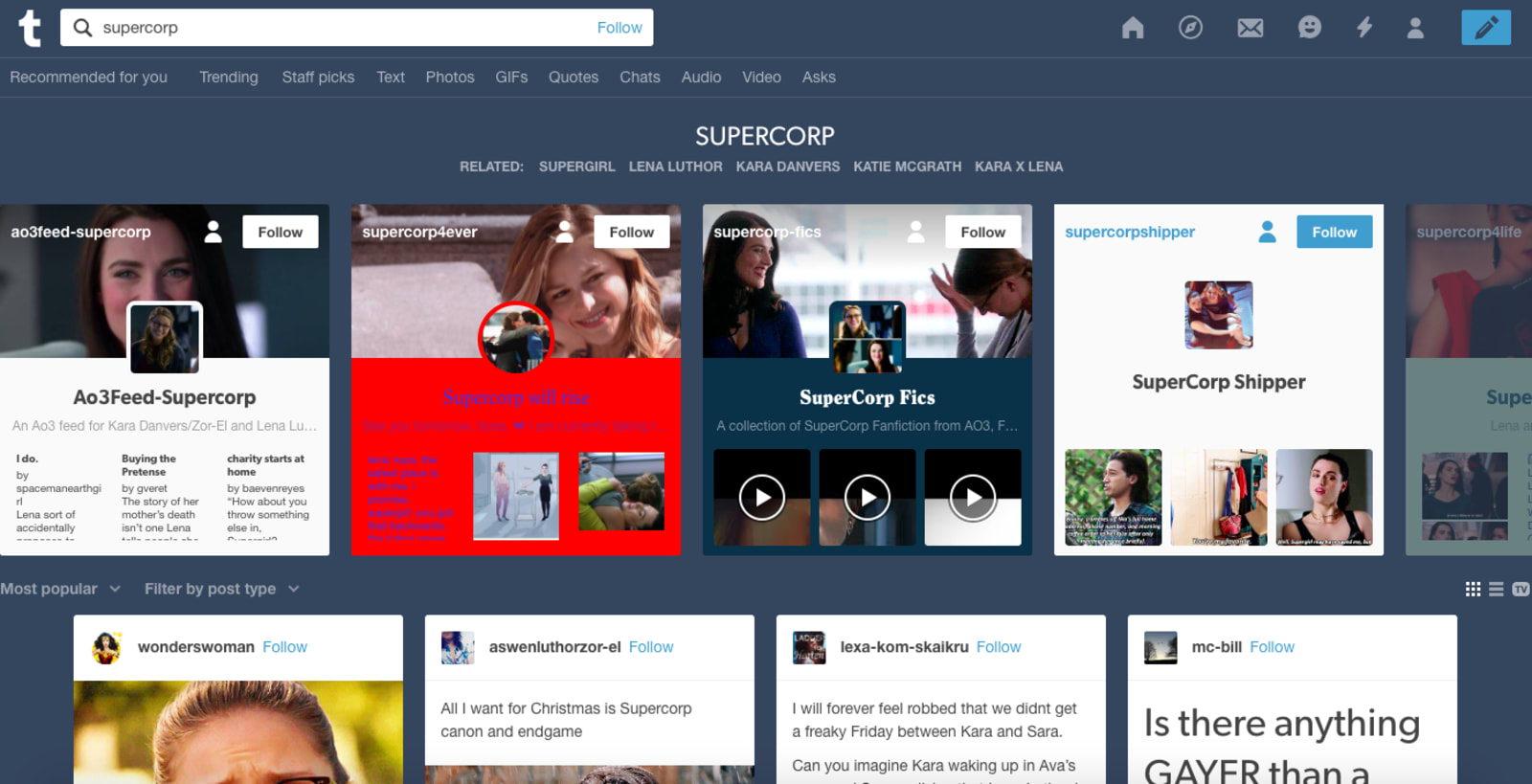 Fanfiction, fan art and broader homage communities take this idea one step further, inviting in creators and consumers of all backgrounds, including and especially LGBTQI people. Fandom is a place where young gay women and others can finally insert themselves into a world they love and explore relationships that set their souls on fire, just like straight, cisgender kids do with the existing stories in popular culture.

"Women, queer people, gender-nonconforming people -- you know there's always been a lot of, how dare you?" McGuire said. "It's what one of my friends in college used to call the lesbian-porn effect. Like, there are a lot of people who are just disgusted and horrified by the existence of actual lesbians in the real world, but who also love lesbian porn because then they can imagine themselves with those two women and they're still the center of the story. Even if the story was never meant to include them at all. There's a lot of stuff on Tumblr that does not create that space for the people that have historically been catered to." 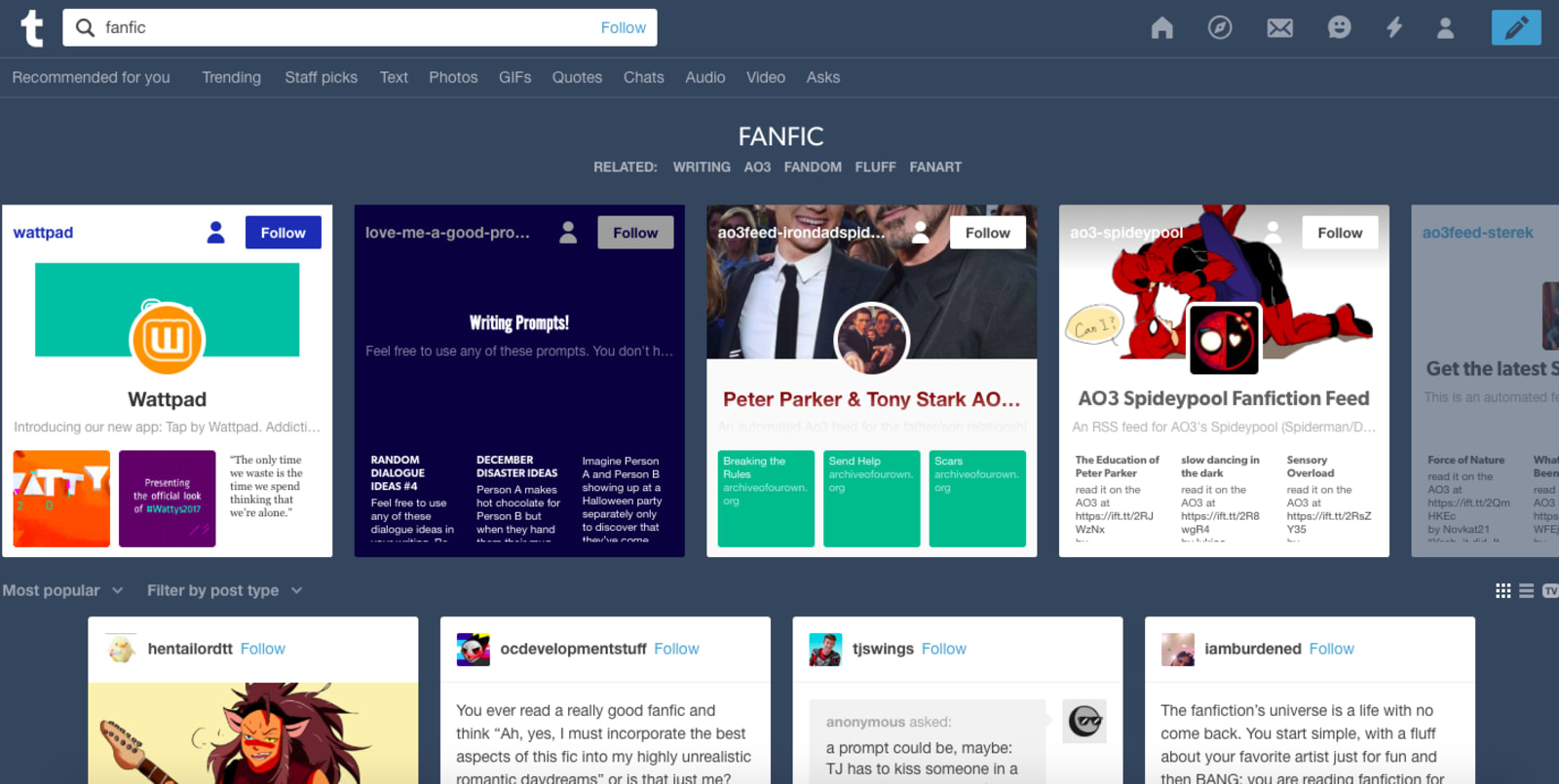 The second likely reason is Tumblr's parent companies, Oath and Verizon (Oath also owns Engadget). Tumblr was gobbled up by Verizon in June 2017 as part of the Yahoo sale, and since that time the site has become more prohibitive. Safe mode is now automatically enabled for every user, blocking "explicit" content by default, and the site's community guidelines have been overhauled a few times.

"The puritanistic nature of this is coming from, 'We think the gays will hurt our financial chances,'" McGuire said. "It's coming from the idea that any LGBTQ content is innately adult and thus is innately less marketable. You know, you make your movie PG because you want to have more people come in and see it. Well, if you treat a little girl kissing a little girl as inherently NC-17 or X, then obviously fewer people will see it and you should take that away. And that's why this is such a dangerous attitude."

When Verizon was in the process of buying Yahoo and Tumblr, many people in fandom communities saw the writing on the wall, largely because they'd endured this process before. Fanfiction and fanart has found a home at a handful of sites over the years, from LiveJournal and FanFiction.net to DeviantArt and Tumblr -- but it seems that every time it settles in at a particular site, the terms of service get updated and the community is purged.

Fanfiction itself isn't banned in Tumblr's new rules. As the Tumblr Help Center puts it, "Written content such as erotica ... can be freely posted on Tumblr." However, the new rules blow up entire fandom communities, because these spaces celebrate art and writing in equal measure. Besides, with an increasing focus on eradicating pornography on the site, many fan-fiction writers and readers feel it's only a matter of time. They're not welcome on Tumblr any longer.

The Tumblr fandom community is splintering, but there are efforts to keep things together. There's discussion about migrating to services like Pillowfort or Dreamwidth, but there's no way to direct the exodus. After Tumblr, there's no sole repository for nerdy, pop culture-infused, queer, female-led, NSFW stories and art.

When men write fanfic, there is a tendency for the media to report on it as "transformative" and "transgressive" and "a new take on a classic story."

When women do it, the same media goes "hee hee hee she wrote about dicks."

The best hope for the future of fanfiction is Archive of Our Own (AO3, as it's commonly called), an online collection hosted by The Organization for Transformative Works (OTW), a nonprofit group founded by fans after LiveJournal distanced itself from the community in 2007. AO3 includes stories from a broad range of fandoms, with 184,907 works set in the Harry Potter universe and 273,354 about Marvel characters alone. However, AO3 comes with its own limitations.

"We own the servers," McGuire said. "That's why it's a nonprofit. So as long as people are willing to utilize the service that has been built for them by people that have been through this before, fanfic is likely to be fine. The problem is that AO3 is not set up for the graphic work. It was never meant to be a graphic fannish archive, and it doesn't have the structure or the robustness for that. So, we're going to lose a lot of the fan art communities. We're going to lose a lot of the graphics communities."

AO3 published an update on December 8th about Tumblr's adult-content ban and what it would mean for the community going forward. It offers tips on preserving online work and lays out a system for inviting new creators to share their wares on the site. 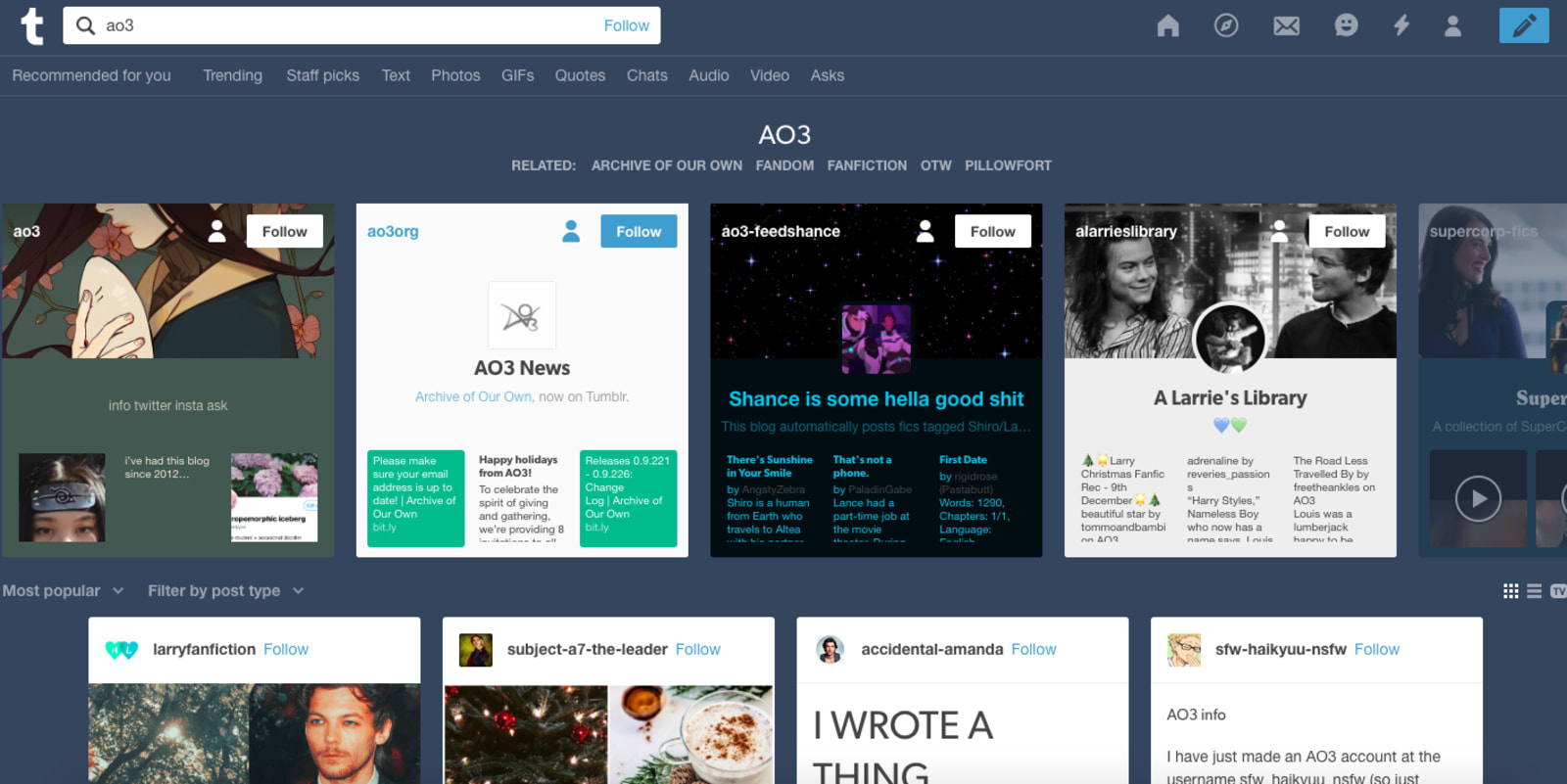 "After seeing that commercial platforms such as LiveJournal (and Tumblr) will always serve their own interests over the interests of fans, the OTW dedicated the AO3 to the principle that fans need a fan-operated, nonprofit archive of our own," AO3's post reads. "We can't predict or recommend what the next best platforms are to replace Tumblr, but we can promise that with your support, we'll continue to provide a home for fanworks at the AO3, and continue working toward a platform that can host multiple media types."

"You are the hero here."

Fanfiction isn't lost, but it does have to regroup online yet again. Thousands, if not millions, of readers around the world have found solace in the clicks between chapters and the freedom to explore parts of themselves otherwise ignored by the broader culture. As a medium dominated by women and people at odds with traditional social structures, fanfiction creators understand what it means to fight for mere existence. Tumblr isn't their first, or last, battle.

"What we're doing with fanfic is just maintaining a tradition that goes back to the beginning of the human race," McGuire said. She studied folklore at the University of California Berkeley and recalled something she learned about classic fairy tales before The Brothers Grimm got their hands on them: Characters rarely received physical descriptions, so people anywhere could retell the story and relate to it.

"It is very much about, the story is yours," she said. "The story has always been yours. Let me take you into the deep, dark woods and trust that you will come out the other side because you are the hero here."