Sony learned nothing from Nintendo.

The PlayStation Classic is a mistake. It's a quick attempt by Sony to cash in on the micro-console trend, something Nintendo kicked off with the NES and SNES Classic. (Sony didn't even try to differentiate the name from Nintendo's systems.) There's definitely room to improve upon the idea of a tiny retro console, but Sony simply didn't. What we're left with is a machine that has an odd collection of games and a problematic controller and, perhaps most damning of all, betrays the memory of the original PlayStation.

Okay, maybe I'm being too dramatic. Younger gamers who didn't grow up with the PlayStation might find something to enjoy. It gives them a reason to explore the first generation of 3D titles, even if some are too ugly and awkward to play for very long. And at $100, it's an easy gift option. But it's hard not to be disappointed.

The PlayStation Classic looks just like the original gray system, except it's 45 percent smaller. On top, there's a mock disc tray cover (it doesn't open, unsurprisingly), as well as power, reset and eject buttons. Hitting reset brings you back to the PS Classic home screen, while eject lets you virtually swap discs for larger games like Final Fantasy VII. It relies on USB connections for its two wired controllers, and around the back there's an HDMI connection and a micro-USB port for power.

Oddly enough, Sony doesn't include a USB AC adapter in the box, even though it recommends using one to power the system. Perhaps the company assumed we all just have plenty lying around. The system technically can be powered by any USB port that delivers 1 amp of power, but that excludes every generation before USB 3.1. I wasn't able to power the PS Classic with any of the ports on my LG OLED TV, so I ended up using the AC adapter from my Chromecast Ultra. (It was already behind my TV, so laziness prevailed.) 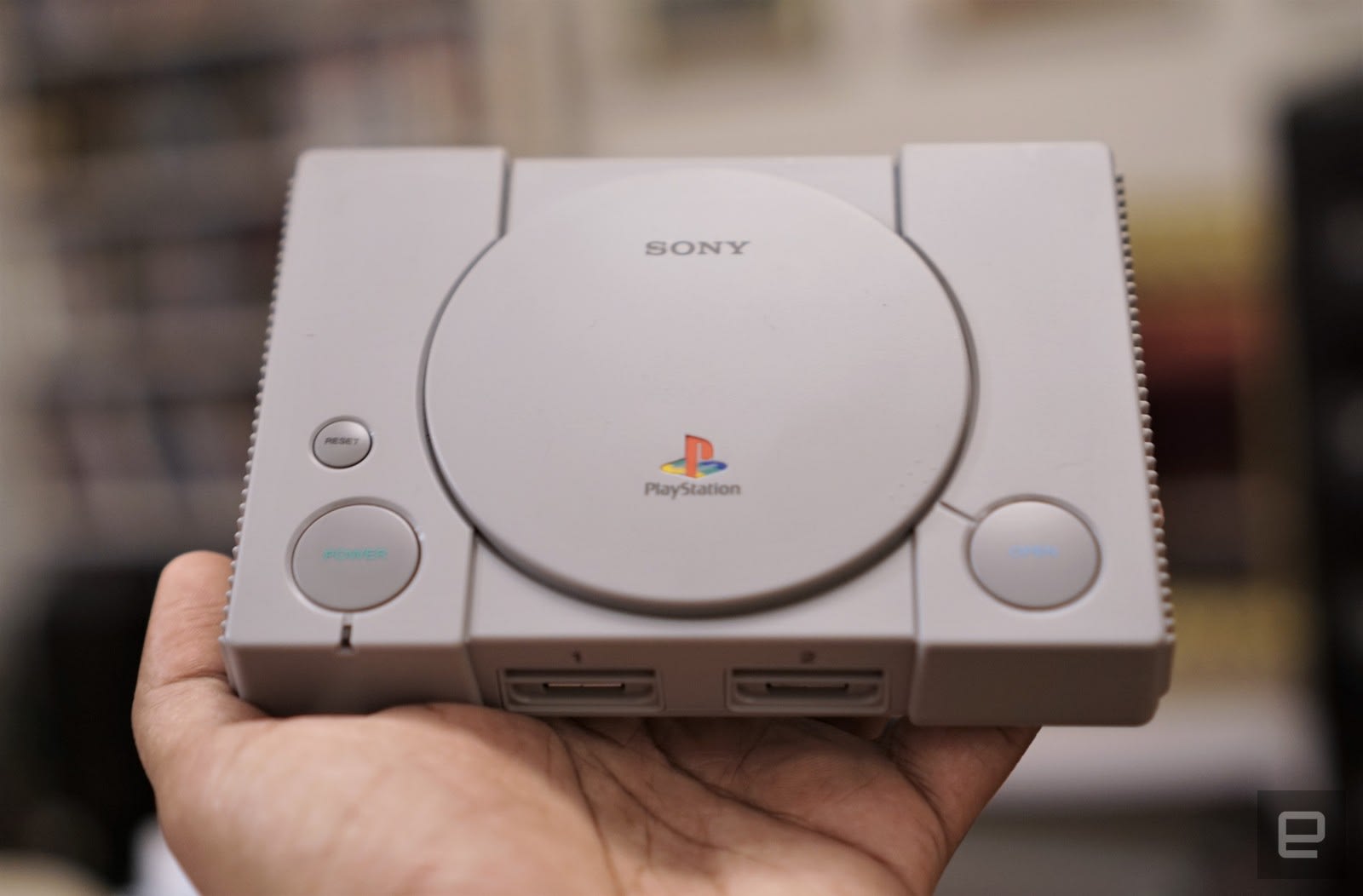 While I wasn't too bothered by not having an AC adapter in the box, I can imagine plenty of parents being crestfallen when they can't easily hook up the PS Classic Christmas morning. Clearly, Sony was just trying to cut every corner possible to reach $100.

It also feels like Sony cheaped out with the PlayStation Classic's controllers. They're re-creations of the original system's gamepads, so they don't have Dual Shock analog sticks or vibration. Sticking with the original design seems more nostalgic, but it's a strange choice when included games like Metal Gear Solid and Ridge Racer Type 4 were developed with analog movement in mind. Making things even worse, the controller cables are only 4.9 feet long. That's better than the SNES Classic's laughable 3-foot cables, but it's still not enough to reach my couch. I had to pull up an ottoman and sit in front of my coffee table to play it comfortably. You could conceivably use USB extension cables to add a bit more length, but I threw those things out of my house years ago.

Upon booting up the PlayStation Classic, you're thrust into the home screen, which is reminiscent of the CD player on the original console. There's a carousel with all of the games, as well as a virtual memory card that you can access. That works as you'd expect, but you can also create a suspend point anywhere in a game by hitting the reset button. I only wish the system let me create multiple suspend points -- whenever you make a new one, you blow the last one away.

The most important part is the games, and that's a bit of a mixed bag. Some titles, like Final Fantasy VII, are recreated well. As soon as I started it up, I couldn't help but play until I defeated the first boss and struck a blow against the Shinra Corporation. Jumping Flash, which I never spent much time with before, was pretty fun and an intriguing window into early 3D platforming. And Metal Gear Solid still looks and sounds impressive, especially after slogging through the first stage of Syphon Filter (a game I loved at the time, but one that has aged very poorly).

But the emulation isn't always consistent. Ridge Racer Type 4 has significant frame-rate dips and jitteriness (or judder, in video-geek-speak) that makes playing the game a huge headache. That's a particular shame, since the original was a graphical milestone for the 32-bit era. There's no longer any sense of speed, and I had a hard time steering without analog controls. I'm surprised Namco's developers haven't complained that Sony's slipshod development turned one of the highlights of the PlayStation into an unplayable mess. 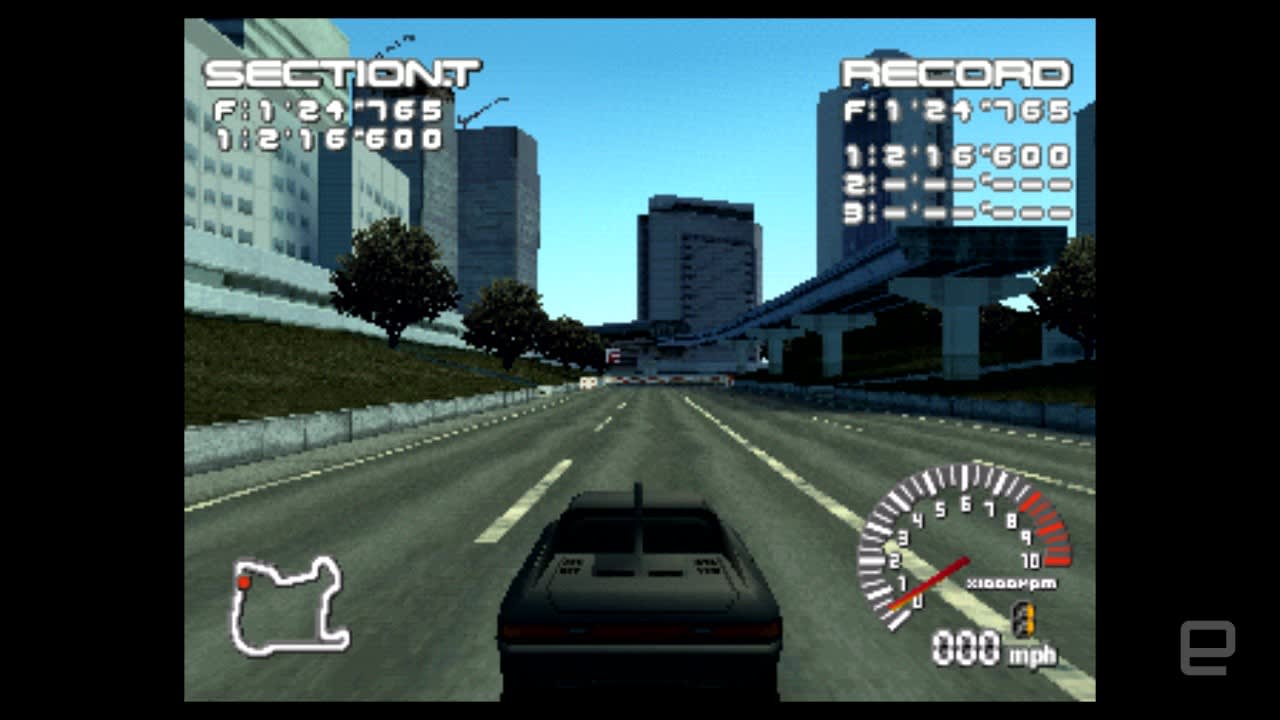 But, even when the games are emulated well, their muddy textures and simplistic 3D models look terrible in 720p on today's HD and 4K TVs. Old-school standard-definition TVs were actually perfectly suited to the 32-bit-console era, since they could hide flaws. Ironically, the 2D games on the PlayStation Classic, like Rayman and Super Puzzle Fighter II Turbo, fare better than 3D titles, with bright and colorful graphics and solid frame rates. Sony had a chance to spiff up the rendering for all of the PS Classic's games, since it relies on the popular open-source PCSX ReArmed emulator, but they simply chose not to.

The PlayStation Classic's greatest flaw is a truly baffling one: nine out of the 20 games are the European PAL versions, meaning they're designed for 50Hz TVs instead of the 60Hz NTSC standard used in the US and Japan. That includes Tekken 3, Resident Evil: Director's Cut, Battle Arena Toshinden and Grand Theft Auto. As you'd imagine, getting games built for 50Hz to run on modern 60Hz HDTVs isn't pretty. There are noticeable frame artifacts and judder while playing all of the PAL games. The European video standard also ended up slowing down NTSC game performance by around 17 percent, and that curse follows them on the PlayStation Classic. Tekken 3 feels like you're playing the game in slow motion -- you can forget about timing moves and combos properly. 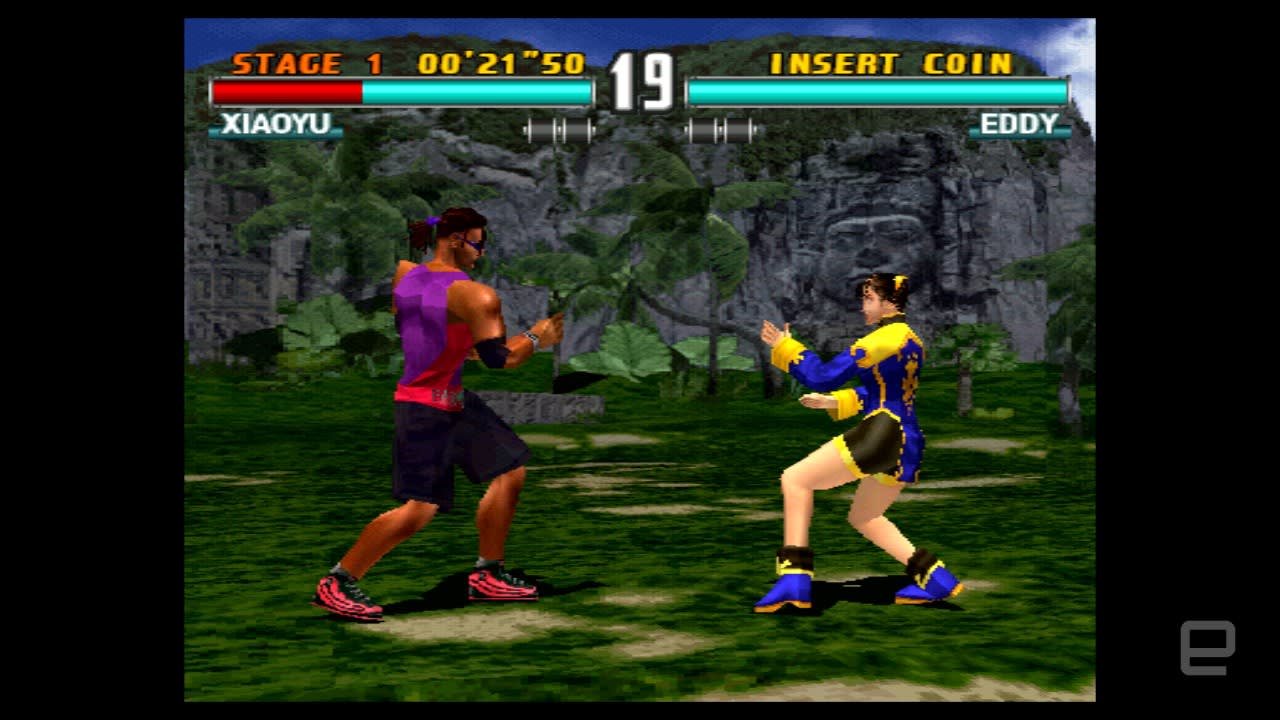 Sony hasn't said why it chose the PAL versions of these games for the PS Classic, but it might have to do with their wider language support. (The company didn't respond to our queries about PAL support.) At least the console avoids the egregious letterboxing that European gamers had to put up with for decades. That came about because developers didn't properly port over NTSC titles. It's a small consolation, though. Together with the shoddy emulation, Sony has effectively preserved the worst versions of these games. It'll be a disappointment to anyone who grew up playing them, and it'll give younger players an inaccurate view of what the original PlayStation was like.

I'm not surprised that Sony isn't offering a way to put more games on the system, just like Nintendo. After all, that leaves room to sell even more retro systems down the line, forcing players to shell out for the same hardware once again. Still, it would have been a way for Sony to differentiate the PS Classic. But of course, the hacking community is already on the job: it turns out the system is pretty easy to decrypt, and there are already a few tools floating around to let you play more titles from a USB drive. You can also access the debug menu by hitting the escape key on certain keyboards, which lets you access features like multiple save states. Unfortunately, none of my keyboards worked with that trick.

I suppose we shouldn't expect much from any tiny retro console. They're pure nostalgia plays, and better at collecting dust than actually being something you'd want to play for hours. That pretty much describes the NES Classic -- as much as I love that original system, I don't have a huge interest in playing much from the 8-bit era. The SNES Classic fared better, since it included better titles, and its colorful sprite-based graphics still hold up today. (Give me sprites over the first generation of polygons any day.)

For the most part, you've got better ways to play most of the PlayStation Classic's titles. If you want the most foolproof method, grab an early-generation PlayStation 3, which includes all of the PS1 hardware. But you can also play emulated versions of those games on that system, as well as the PlayStation 4, the Vita and even the PSP.

It's hard to see the PlayStation Classic as anything but a disappointment. Casual and younger players might not notice its flaws, but they cut deep for anyone who spent their weekends glued to their PlayStation. It's a reminder to console makers that they can't just treat these retro consoles as an easy way to pump up their holiday sales. Hopefully Nintendo and Sega take note before they deliver a throwback Dreamcast (which I would love to see) and Nintendo 64.

All products recommended by Engadget are selected by our editorial team, independent of our parent company. Some of our stories include affiliate links. If you buy something through one of these links, we may earn an affiliate commission. All prices are correct at the time of publishing.
View All Comments
PlayStation Classic review: A disappointing dose of nostalgia