‘Travis Strikes Again’ is an indie-sized comeback for Suda51

In 2010, Goichi Suda seemed unstoppable. The Japanese game developer, known by his nickname 'Suda51,' had just released No More Heroes 2: Desperate Struggle, a vibrant clash of stylized decapitations and eccentric, oftentimes sexually-charged humor. The Wiimote-waggling hack-and-slash reviewed favorably, cementing Suda's status as a risk-taking auteur similar to American filmmaker Quentin Tarantino. The next few games he released, however, didn't fare so well. Shadows of the Damned, Lollipop Chainsaw and Killer is Dead were all criticized for their groan-inducing jokes and general lack of polish. The excitement around Suda and his once-promising studio, Grasshopper Manufacture, slowly fizzled out.

The punk-rock developer isn't finished, though. Two years ago, Grasshopper released Let it Die, a free-to-play dungeon crawler that blended Suda's unmistakable style with some procedural level design and light, Dark Souls-inspired combat. The game wasn't perfect, but the roguelike elements and freemium price-tag made it easier to overlook the so-so level design and occasionally cumbersome battles.

Now, Suda is back with a No More Heroes spin-off called Travis Strikes Again. It's launching on Nintendo Switch next month and is, unsurprisingly, pretty weird. But maybe in a good way?

To be clear: this isn't No More Heroes 3. The game has a smaller story that focuses on Travis Touchdown, the series' foul-mouthed hero, as he battles his way through a phantom console called the Death Drive Mark II. The campaign takes place in seven worlds loosely inspired by video games that came out in the 1980s and '90s. There's also a special crossover with Hotline Miami, the ultra-violent indie sensation published by Devolver in 2012, that Suda doesn't want to spoil before the game's release.

I played the opening half-hour of Travis Strikes Again at a preview event last week. The visuals were fairly rudimentary, but that's by design -- the first 'game,' called Electric Thunder Tiger 2, is supposed to look like something that came out in the PS1 era. And at first, I wasn't impressed by the arcade-style combat, either. But as the enemies grew in strength and number I began to appreciate the surprisingly deep controls, which include some lightning-fast homing attacks, swappable powers and a special finisher that levels up if you land basic hits without taking damage.

Travis Strikes Again might feel small in scope and ambition, but that's intentional.

At times, it feels like a bullet-hell shooter similar to Ikaruga and modern Housemarque titles such as Nex Machina. You're bouncing between enemies, saving your stuns and finishers for when there's nowhere left to run.

The game supports local co-op -- a first for the No More Heroes franchise. Travis and Badman, the father of an assassin slain in a previous game, can each be controlled with a single Joy-con. That means anyone can theoretically walk up and drop into your game, just like people used to at arcades.

Travis Strikes Again might feel small in scope and ambition, but that's intentional. After Let it Die, Suda asked GungHo, the Japanese developer that acquired Grasshopper in 2013, whether he could return to his roots and work on a project with a smaller team. The director had been inspired after meeting a range of independent developers including Jonatan Söderström and Dennis Wedin, the creative force behind Hotline Miami. Gungho agreed and Suda rebooted Grasshopper with just five people. "There were some outside staff," Suda told Engadget through an English interpreter, "but the core team [at first] was only five people."

Originally, Travis Strikes Again wasn't going to be set in the No More Heroes universe. But when the Nintendo Switch was unveiled in late 2016, Suda realized the hardware would be perfect for Grasshopper's hibernating hero. He then tweaked the storyline to center around Travis and, hopefully, build excitement for a potential numbered sequel.

I can't recall a single dick joke, or suggestive cinematic, during my half-hour playthrough.

Travis Strikes Again retains the wit and humor of the No More Heroes franchise. It's clearly self-aware, with endless jokes that poke fun at gamer culture and conventions. In the opening world, for instance, Travis encounters a manifestation of the sentient console -- two figures, Death and Drive, connected by an assortment of cables. They start explaining the rules of world until Travis cuts them off and says: "You talk too damn much. This is what sucks about games these days. It takes too long to finally start playing."

Notably, Suda seems to have dialed down the titillation, too. I can't recall a single dick joke, or suggestive cinematic, during my half-hour playthrough. If the entire game is like this, I'll be glad. The dialogue leans on expletives instead which feel, somewhat ironically, more mature for Travis. 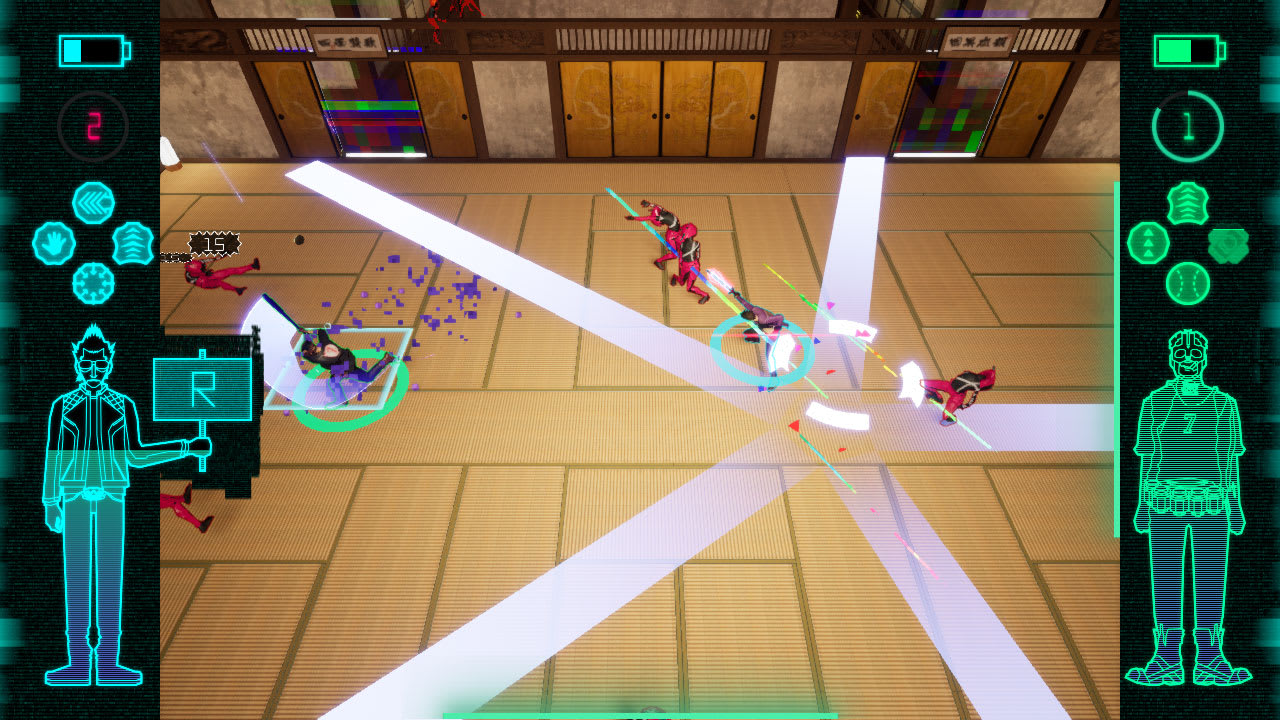 From the jump, it's obvious that Travis is familiar with the games he's playing through. Partway through my demo, the lightsaber -- sorry, beam katana -- wielding assassin encountered a boss called Electro Triple Star. Instead of cowering in fear, Travis exclaimed: "Triple Star! I know you! I played that [game] for days in the arcade. The industrial monster designs were badass!" Suda says Travis is the type of person that would love to be called a "hardcore gamer." He'll always pick the hardest difficulty, even if he struggles and eventually drops down to an easier setting.

The game, then, is an exploration of video game tropes and cliches. Suda's interpreter explained: "All of the commentary in the game, and the way things are depicted... Suda always wants it to be from Travis' point of view. It's Travis looking out toward the state of games now, and the video game industry. So whether some things appear as light jokes, or whether they seem to have a deeper meaning to them, that's all from Travis."

At one stage, Suda was considering a bunch of levels inspired by specific indie games. He dropped the idea, however, because communicating with every indie developer and getting clearance for his wacky ideas would have taken too much time. Aside from Hotline Miami -- a byproduct of his close friendship with Wedin -- all of the collaborations are restricted to t-shirt designs. Suda says the game will also have a bunch of cameos from older Grasshopper titles, both inside and outside the No More Heroes universe, to celebrate the studio's 20th anniversary next year.

The levels will sometimes feel repetitive, or have a section that feels unbalanced.

Most of the worlds are loosely inspired by arcade classics instead. Suda wanted to recapture the mystery and intrigue of games such as Galaga that captivated him as a child. That means the levels will sometimes feel repetitive, or have a section that feels unbalanced. Some will also have surprises that break genre tropes and conventions. "He wants there to be some element of natural surprise," Suda's interpreter said. "Positive surprise, to a lot of the games. Where people think it's going to be one thing, and it turns out to be something else entirely."

It's a high-risk strategy. Arcade games were designed, after all, with unfair difficulty spikes to extract more money from the player. The repetition, meanwhile, was a byproduct of smaller teams and budgets. Suda says he's spent a lot of time balancing the "rhythm" of each world so that the repetitive sections are still fun to play. He's also made a few concessions that are expected of modern video games in 2019. "But in the end," Suda's interpreter explained, "his desire to bring that unique flavor of fun that he felt in his childhood, to a new generation of young gamers, ended up beating out everything else."

Travis Strikes Again is a gamble to make No More Heroes and, by extension, Suda relevant again. In a demo built specifically for GDC, Death and Drive say to Travis: "You're a living legend. A 'legend' means someone whose time has already passed." People used to call Suda a legendary game designer. And while he's honored by these comments, they make him feel like a relic. "It makes him think that, 'I don't want to be a legend, not yet!'" Suda's interpreter said. "Travis feels the same way. He's had this blank period. So his goal is to create a new story, not just for Travis but also himself."

Suda's team has grown from five to 15 during the development of Travis Strikes Again. Many of these additions are people who have worked at Grasshopper before. Suda says the smaller studio has helped him build a stronger core for future project. It's also allowed him to work with younger members that, on previous games, he never spoke to directly.

The director isn't averse to leading a larger team again, however. He'll need one to make No More Heroes 3, a still-theoretical sequel to Travis Strikes Again. Suda says he's already written the outline for the game, which pits Travis against "some really crazy enemies, unlike anything he's ever experienced." To fight those crazy beings, however, the assassin needs new powers and abilities. "It's going to be like Thanos-level, if you talk about the Avengers," his interpreter explained. Travis Strikes Again is, therefore, like a prologue or training montage for that eventual game, explaining the assassin's growth since the conclusion of No More Heroes 2 on the Wii.

Suda wants to keep his smaller team and work with outsourced staff to reach the required scale for a larger, borderline triple-A game like No More Heroes 3. First, though, he needs to ship Travis Strikes Again and prove that the long-dormant character, who is intrinsically linked to Grasshopper's divisive style and humor, still has a place in modern video games.