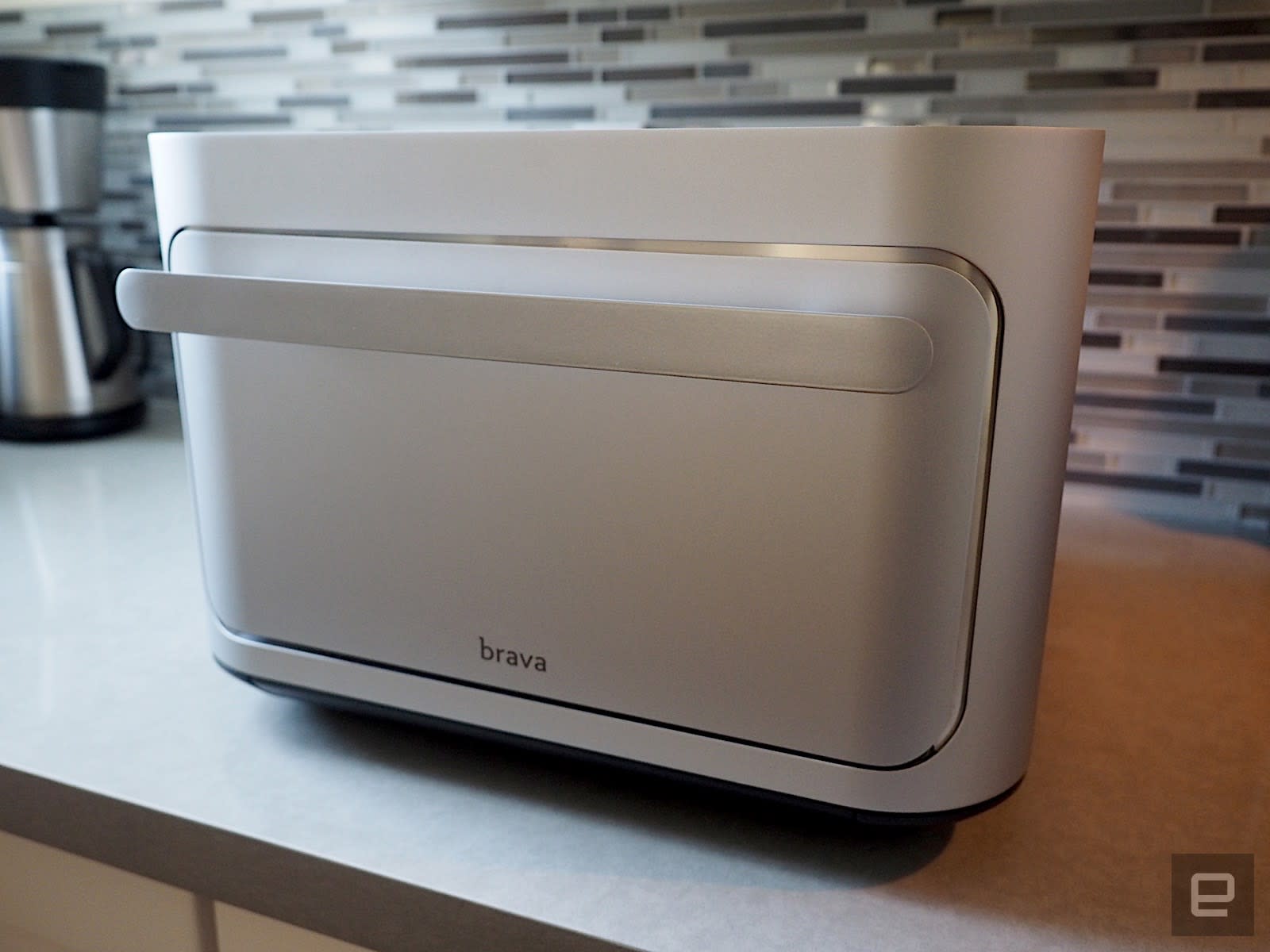 Brava's light-powered smart oven is too expensive to make sense

Preset cook programs can be limiting as well.

Smart cooking gadgets aren't new, but the rise of computerized countertop ovens is relatively recent. The June was one of the first to arrive on the market, three years ago, and the Tovala, a steam-powered model with a meal-kit-subscription service, debuted last year. Now there's yet another one, and it's called the Brava. It retails for a whopping $995, and one of its main selling points is that it cooks with light. Yes, it's basically an Easy-Bake Oven, but for adults.

The Brava is outfitted with six high-powered halogen lamps -- three on the top and three on the bottom -- and they're able to go from 0 to around 500F in less than a second, thanks to a proprietary Pure Light technology. It's therefore able to cook foods really quickly without the need to preheat the oven. There's an exception to this with baking, though, as certain recipes do require preheating; but even that takes mere minutes, a fraction of the time a traditional oven requires.

Underneath it all are some advanced sensors, 8GB of flash storage, 1GB of RAM and a beefy internal processor -- a quad-core ARM Cortex 153 processor with Mali T400 MP2 GPU, to be exact. This is definitely no ordinary oven.

Brava also sells an optional meal kit that it provides via a partnership with PeachDish. The kit works similarly to a service like Blue Apron where you're provided with all the ingredients for the recipe but you still have to do some prep work. The twist here is that in the Brava's case, the oven will figure out the rest of the cooking for you.

There's also a Brava companion app, where you can bookmark recipes, watch tutorial guides and purchase additional PeachDish meals. You can use it to keep an eye on your food while it cooks as well. 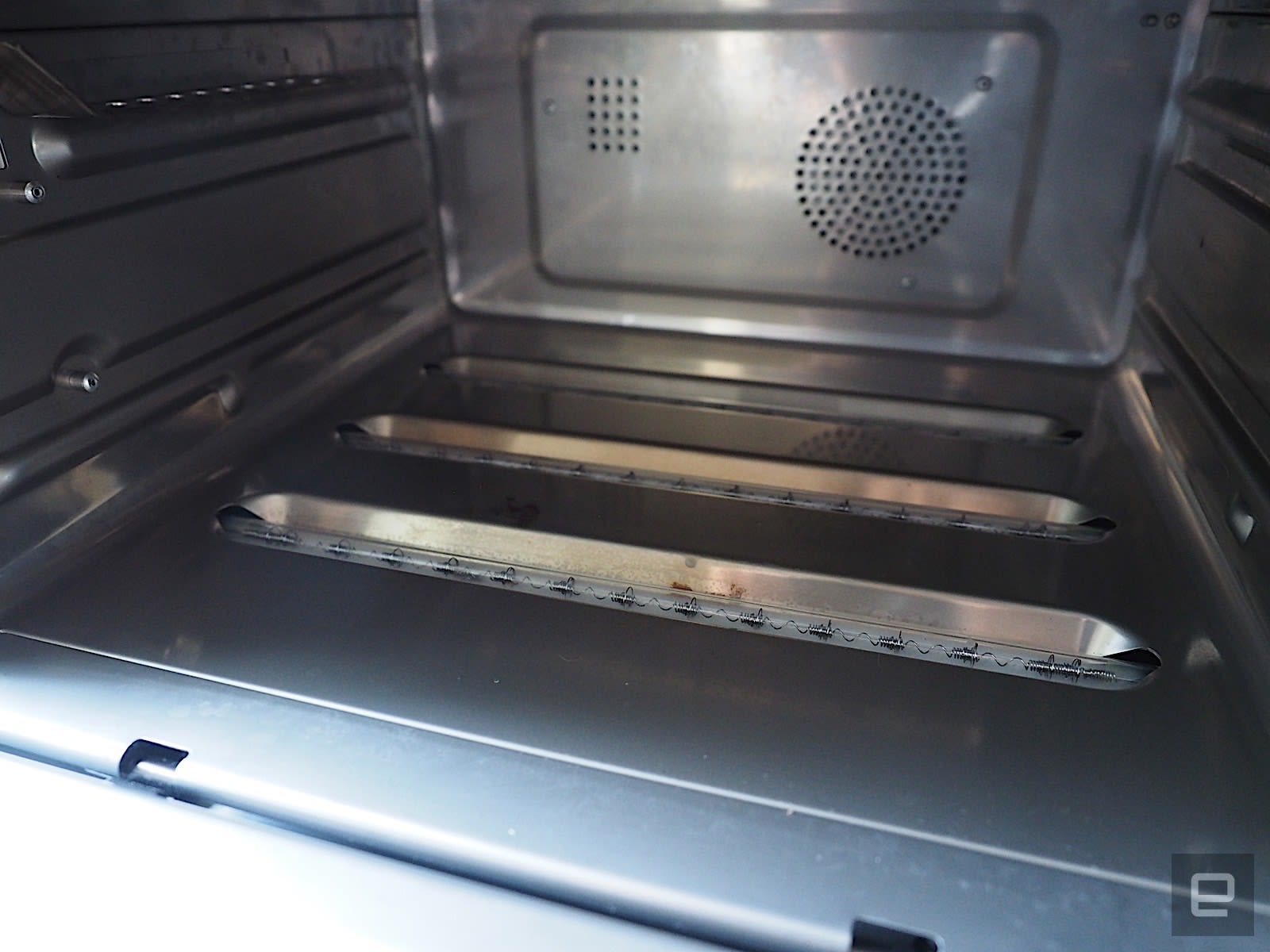 As far as countertop ovens go, the Brava is pretty big. It measures 11.3 inches by 14.1 inches by 16.7 inches and weighs about 34 pounds. This is not an appliance made for those who are short on counter space. Yet even though it's large, the oven cavity itself is quite small at only 1.6 cubic feet: There's no way you could fit a whole turkey in there. The oven looks sleek and modern, with an anodized aluminum chassis that's curved around the sides along with a stainless steel interior. There's a removable rubber silicone mat on the top, which you can use to rest hot trays fresh from the oven.

Also on top is a thick glass edge that houses a single start/stop cooking button plus a five-inch touchscreen display. That's where the rest of the oven's controls are. They include options for searing, toasting, baking and reheating as well as a slew of cooking presets for hundreds of foods. Simply choose what you're cooking -- say, asparagus or half a chicken breast -- and it'll walk you through instructions on how to cook them. For meats and fish, Brava recommends that you use the included probe thermometer that plugs into the side of the oven so that the proteins will cook to the desired temperature.

When food is cooking, the oven's built-in camera will turn on, and you can see what's cooking via the aforementioned display.

In addition to cooking foods quickly, the Brava is also great at cooking multiple foods at once. The oven is essentially divided into three zones from front to back, and each zone can be heated independently of the other. Because of this, the Brava can program each zone to heat at a different power level and at a different interval. The oven comes with two trays -- one metal and one glass -- that are each marked with the numbers 1, 2 and 3, so that you'll know where to put the different ingredients. 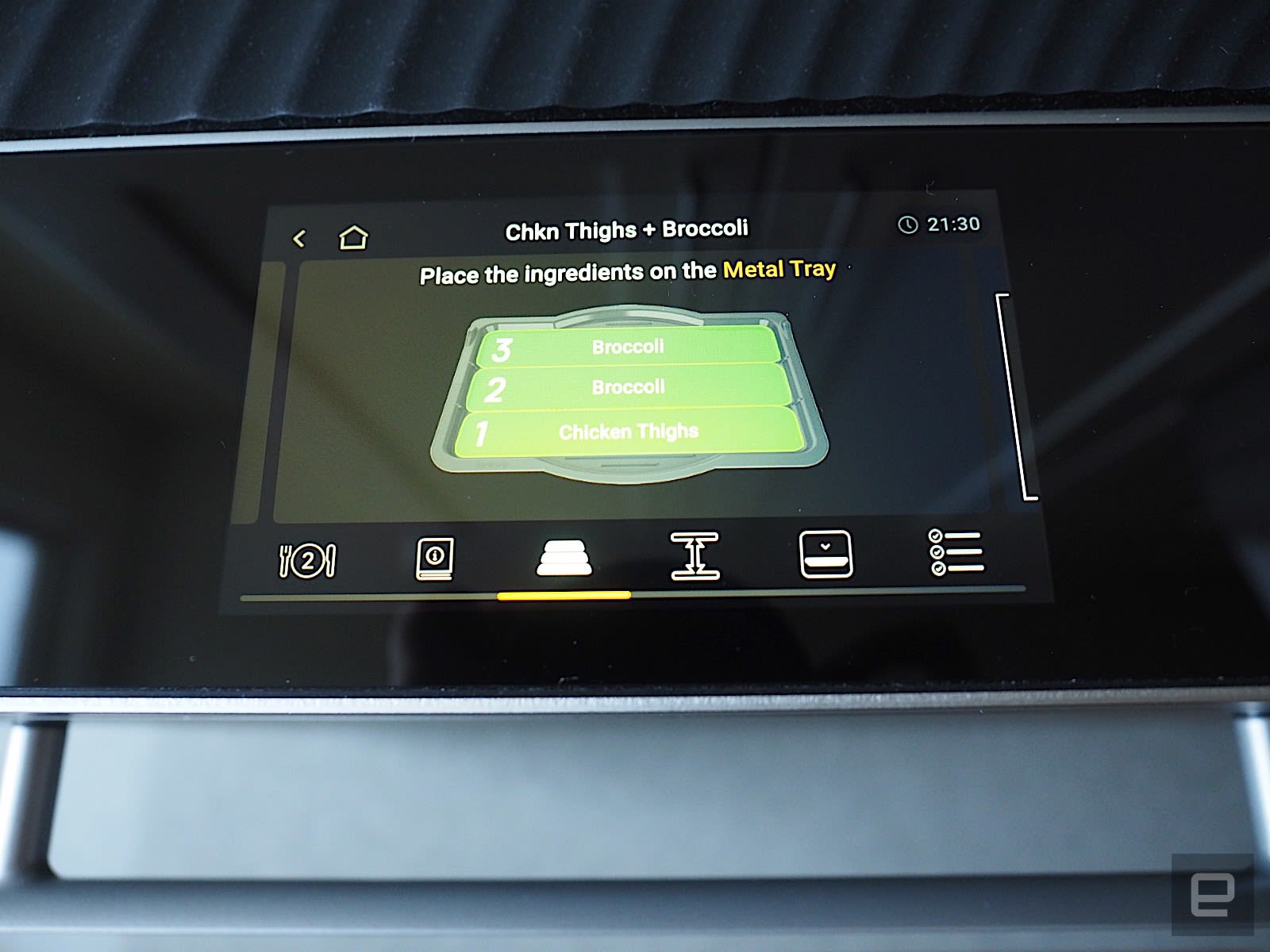 For example, when I was preparing a salmon meal kit from PeachDish, the recipe instructed me to put the salmon in Zone 2 of the glass tray, the asparagus in Zone 3 and the cherry tomatoes in Zone 1. The instructions were specific that the foods shouldn't overlap into other zones, lest they turn out underdone or overcooked. I then inserted the probe thermometer as instructed, closed the oven and hit the cook button. In just 12 or so minutes, my meal was finished, and everything -- salmon, asparagus and tomatoes -- was cooked perfectly. The fish was moist, with a lovely crispy skin.

Aside from those aforementioned meal kits, the Brava oven also has an entire section dedicated to different combinations of foods, with examples like chicken and broccoli, mushrooms and sweet potatoes, and pork chops and carrots. Right now there are around 60 or so cooking-combination programs, with more added every week.

I tried some of these presets as well. Following instructions, I cooked two strips of bacon in Zone 2, which was finished in six minutes. I used an optional Brava egg tray -- a metal pan with four curved cups -- to cook a fried egg, which was finished in three minutes. I made steak and sweet potatoes -- the steak in Zone 1 and the sweet potatoes in Zone 3 -- and that combo took around 20 minutes. The bacon crisped to perfection, the eggs cooked until the whites were firm and the yolks soft and runny, the sweet potatoes came out tender, and the steak finished just a little over medium rare, which I didn't mind at all. I was convinced: When following these cooking presets, the Brava definitely delivers. 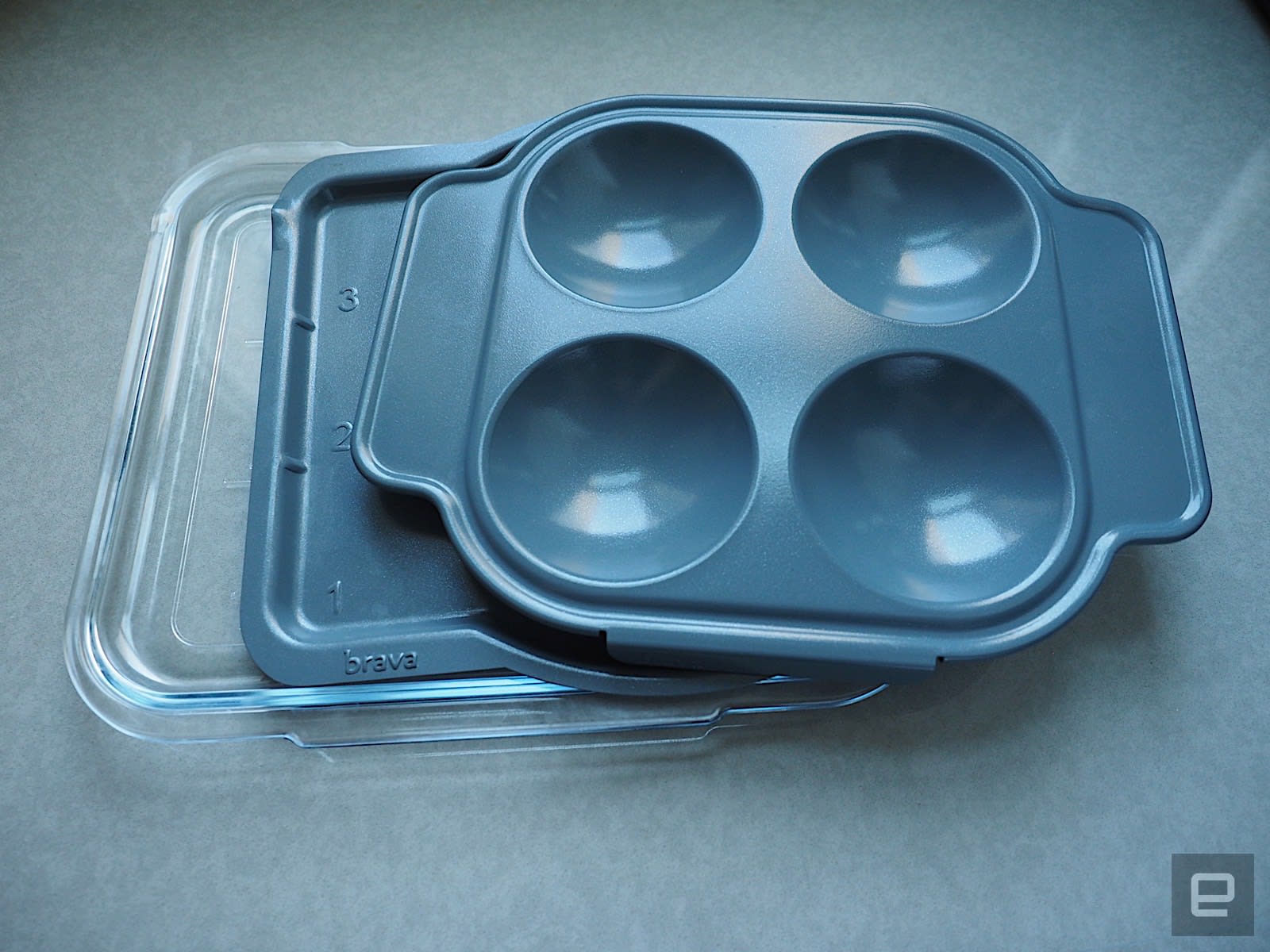 Yet something about it didn't sit right with me. For one thing, the PeachDish meal kits are expensive. The salmon dish for two, for example, is $42, which boils down to $21 per serving. It also gives way more ingredients than you need, and I ended up with a lot of leftover asparagus. That's admittedly better than too few ingredients, but I thought it was a little wasteful.

I didn't like that I had to keep all the foods strictly in those prescribed zones. The oven capacity isn't very big -- about 1.6 cubic feet -- and each zone is pretty narrow, so I had to really make sure the foods didn't overlap with one another. In a normal oven, I don't have to worry so much about such constraints.

Additionally, I felt a little stuck with the cooking presets and programs. For example, even though the Brava has settings for wheat, sourdough and white bread for toast, it doesn't have a setting for bagels or English muffins. It also doesn't have a setting for cooking bacon and eggs at the same time, which seemed to me like an obvious combination. Sure, Brava could update the oven with more presets in the future. Or I could just grab a skillet and cook them on the stovetop.

You can go outside these presets, but at your own risk. The Brava has a Pro Cook mode in beta where you can individually adjust each lamp to different power levels so that you can experiment to see if it'll cook different kinds of foods. But I found this daunting. Because I didn't know how the lights worked in those cooking presets, I didn't even know where to start experimenting. Similar to how you might learn HTML by looking at a website's source code, I was hoping to at least have some kind of template to start making my own light-powered recipes. Instead, it seemed I was expected to learn through trial and error. That's not exactly a bad thing, but when you're hungry and you just want some food, experimenting is probably the last thing on your mind. 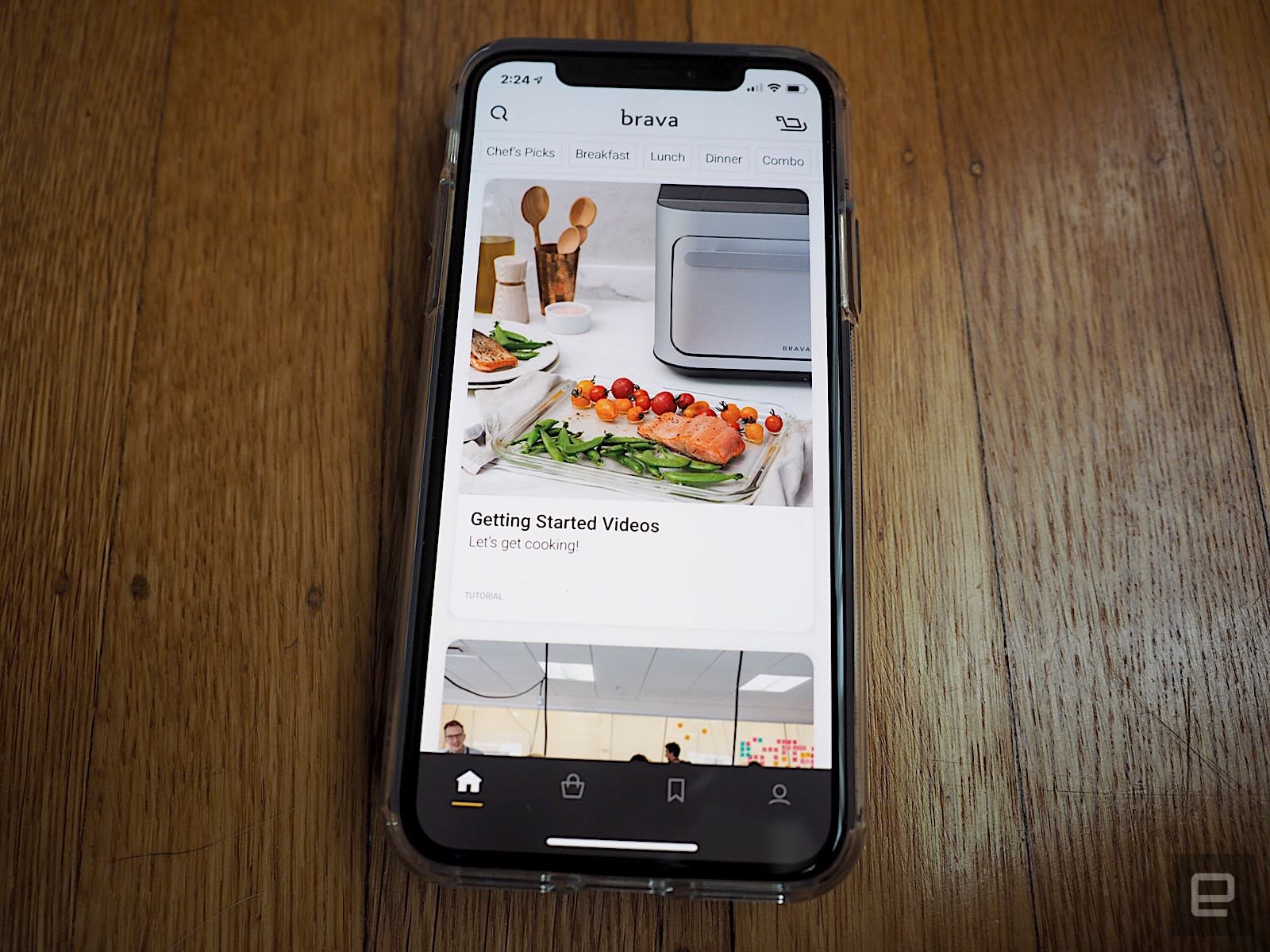 Another weird thing is that you can't substitute foods in those aforementioned combos willy-nilly. For example, in a regular oven, you can cook broccoli and cauliflower at the same time because they have a similar shape. But you can't do that in the Brava. The company tells me that this is because the Brava uses light to cook, and cauliflower has a different color wavelength than broccoli. So if you want to substitute foods, you have to replace them with ones that are the same color and structure. Carrots can be swapped out for sweet potatoes, for example, but not for green beans.

Brava's head chef, Travis Rea, told me that he recognizes there's a learning curve with the Pro Cook program and that he's working on a series of tutorial videos. For example, the Brava doesn't have a preset cooking program for thin steaks, because you can't quite use the probe thermometer for that cut of meat. So he's working on a guide for thin steaks that Brava will eventually post on the web. He also acknowledges that a lot of the Brava's tricks don't apply to standard cooking. "It takes two to 10 days to really get it," he said. 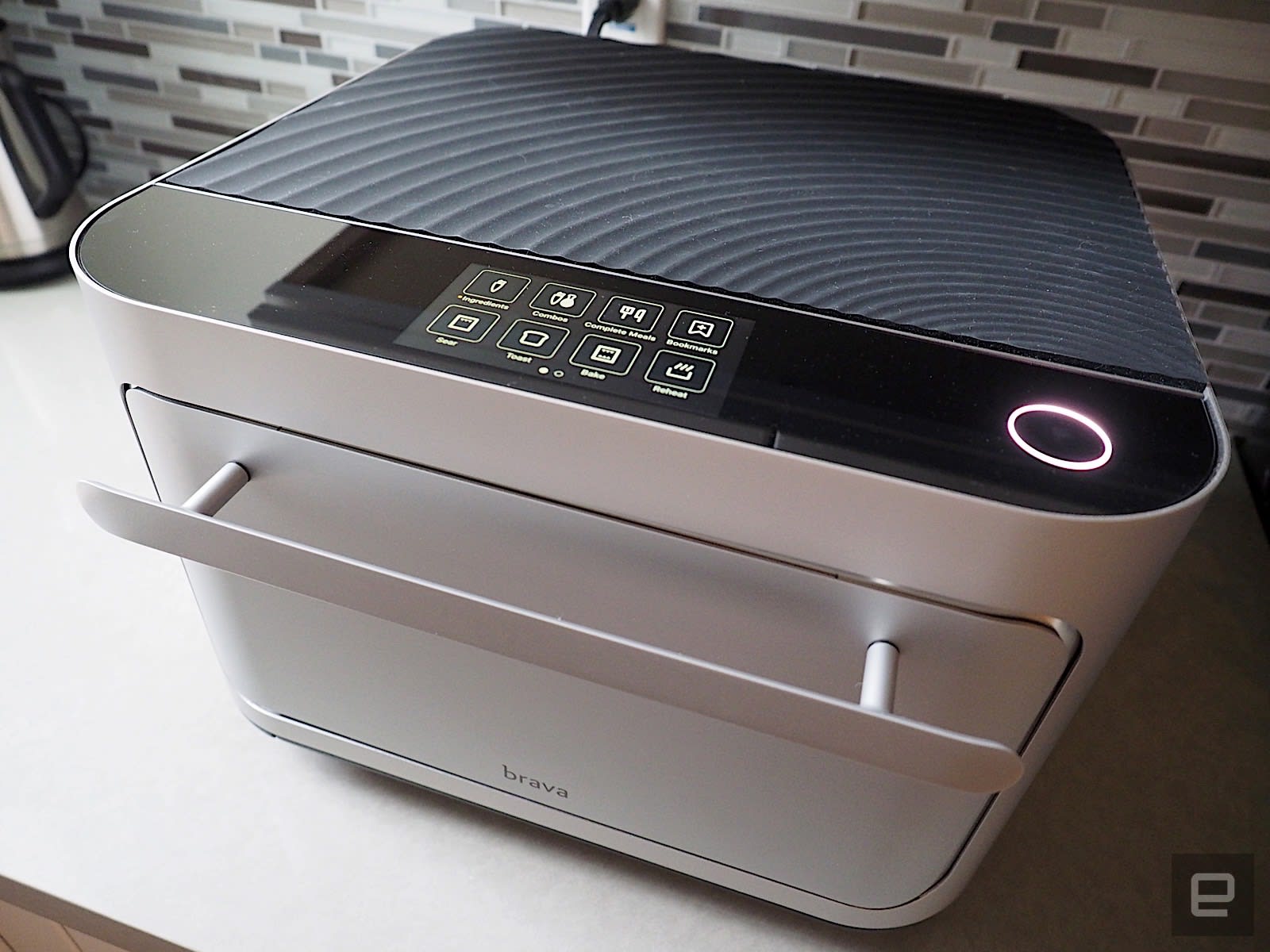 That's the odd conundrum with the Brava. It's such a novel way to cook that traditional cooking rules don't apply. Yes, the Brava can cook foods faster as long as you know what you're doing or if you're following along on a prepared recipe. That might be interesting to cooking novices or those who are simply passionate about trying cutting-edge kitchen tech. For me, I found it to be a limiting and unsatisfying way to cook. If I were in the market for a smart oven, I'd likely opt for the recently updated June instead. It costs $400 less, has a lot more functions (it also acts as an air fryer and a dehydrator), offers a larger library of preset foods and doesn't have any constraints regarding color and zones.

What really kills the Brava oven for me, though, is that I like to cook the old-fashioned way, and all the skills I've accumulated over the years don't apply here. Even in Brava's promotional materials, it says to "throw out everything you know about cooking." Sorry, Brava, but I just don't want to do that.