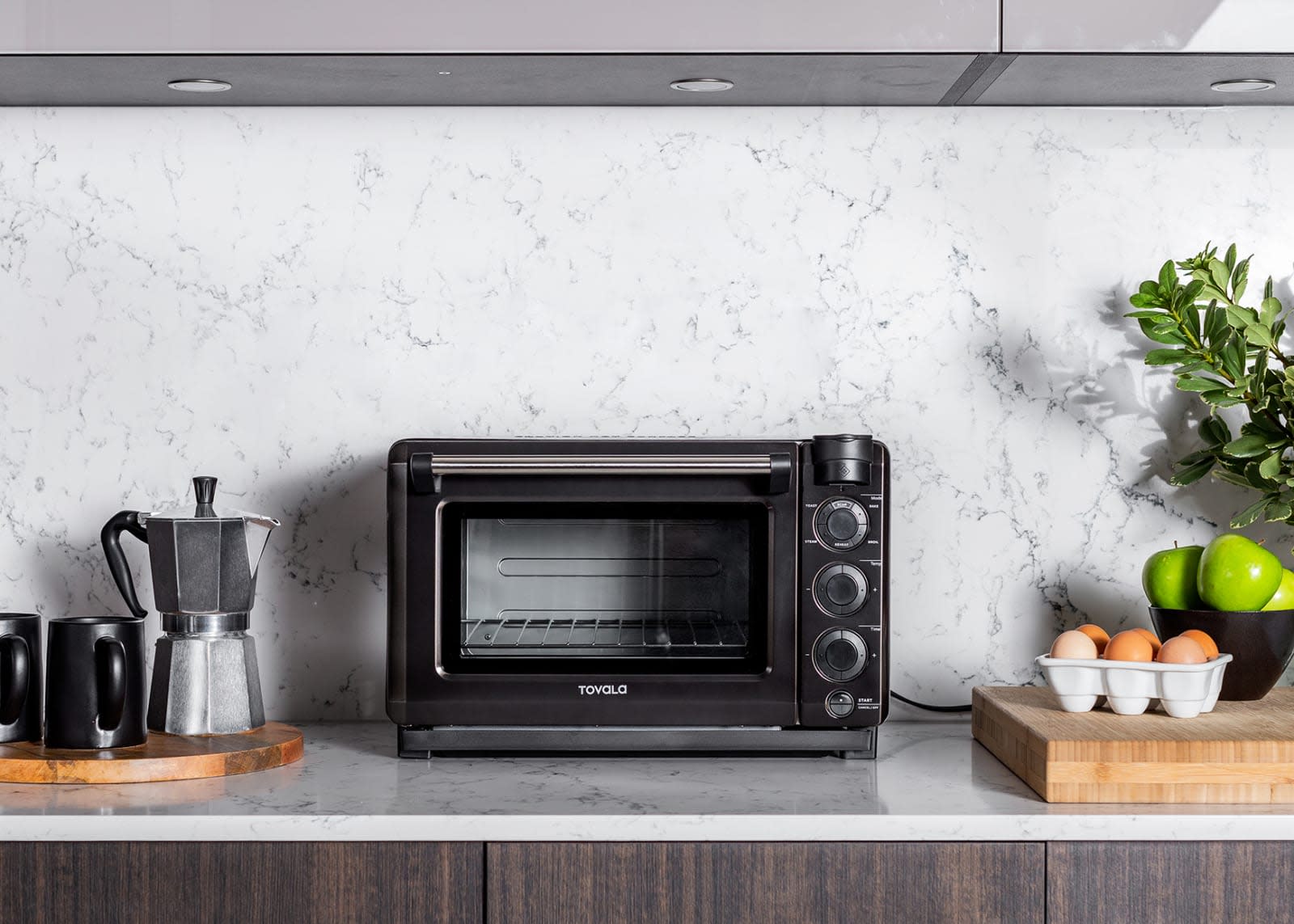 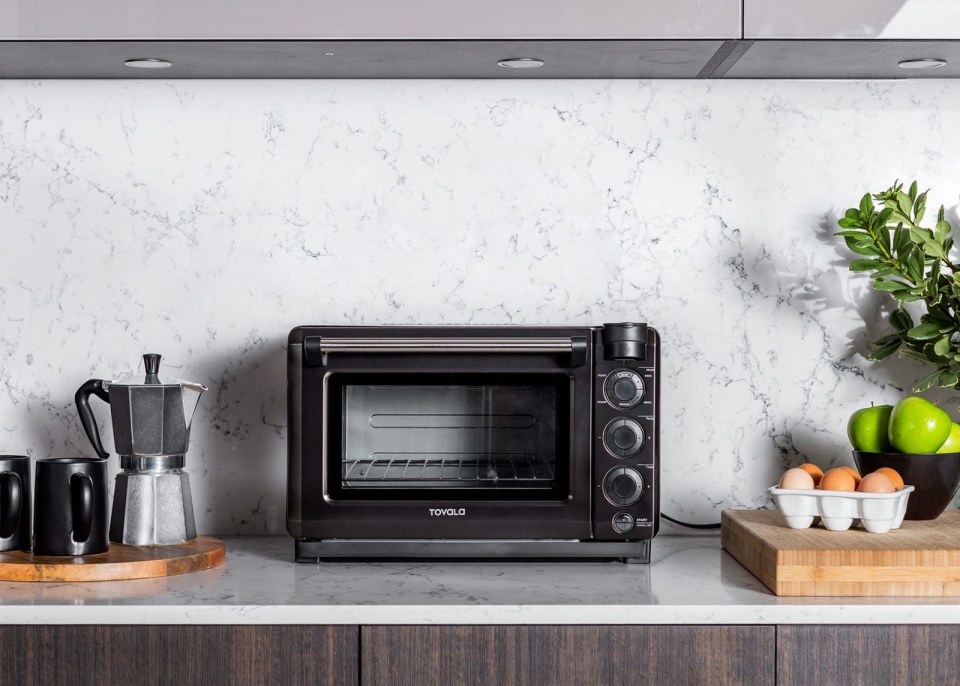 Last year, Tovala introduced its first smart steam oven, which was specially designed to go with the company's own meal-delivery service. Think Blue Apron but without the hassle of actually knowing how to cook. Just do minimal prep work, pop the ready-to-cook meal in the oven, scan the associated barcode and you'll get "homemade food" in less than 30 minutes. Today, the company is ready to reveal the second-generation Tovala, which was designed to look and feel a little more like a regular oven. It's priced at $349. One of the issues with the original Tovala was that it had chunky space-age styling that looked rather out-of-place in most modern kitchens. The new model, on the other hand, appears much more like a high-end toaster oven, complete with a bar handle and wide glass window. It's about 15 percent smaller and lighter too, which is helpful when countertop space is at a premium.

The new Tovala has a couple more dials on the front as well. The original Tovala was designed with simplicity in mind, but in retrospect, it was a little too simple. It had only two buttons; one for toast and one for heat. If you wanted to do anything more complicated, like bake cookies, you'd have to go to the app, select the bake function, and then desired temperature. Now, with the second-gen Tovala, you can steam, bake, broil, toast and reheat foods all with the oven controls, without having to open the app. 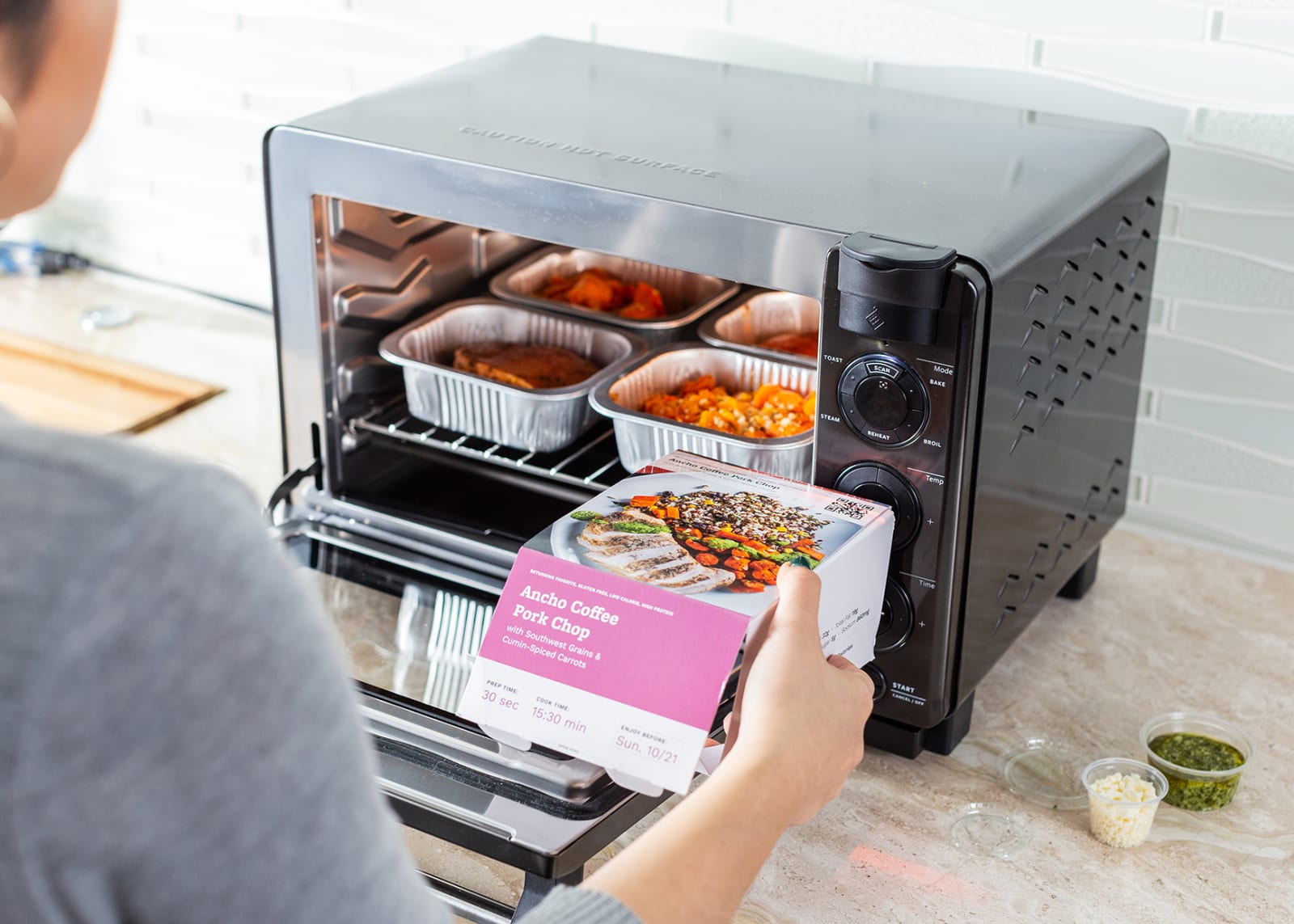 Another welcome improvement is a smarter way of venting steam, which finally allows the Tovala to be placed under kitchen cabinets. One of the ways that Tovala differentiates itself from other ovens is that it uses steam in addition to the usual bake and broil functions. Unfortunately, with the original Tovala, that resulted in quite a large plume of steam whenever it heated foods. The most recent model, however, dissipates it in a much more controlled fashion.

I had the chance to see the new oven in action in a brief demo last week, and it does indeed look very much like a toaster oven you'd see in Williams-Sonoma or Sur La Table. It still works very similarly to the original, however. I prepared a couple of Tovala-provided meals -- a miso-glazed salmon with broccoli and rice, as well as Vietnamese meatballs with kale and tofu -- and the process was pretty easy. I simply removed the packaging, added some of the provided seasoning, slid the aluminum trays in the cavity and scanned the barcode on the box by waving it in front of the oven.

This kicks in Tovala IQ, the company's proprietary technology that connects to the cloud and sets a custom cooking sequence that can cycle from steam to bake or broil, depending on what's required. The app allows me to change a few of these presets on the fly -- for example, if I wanted the salmon to be a little rare, I could tweak the broiling temperature from high to low. I decided to leave it be though, and in about 20 or so minutes each, the meals were done. Perhaps it's because I was hungry at the time, but I did think they were very tasty. 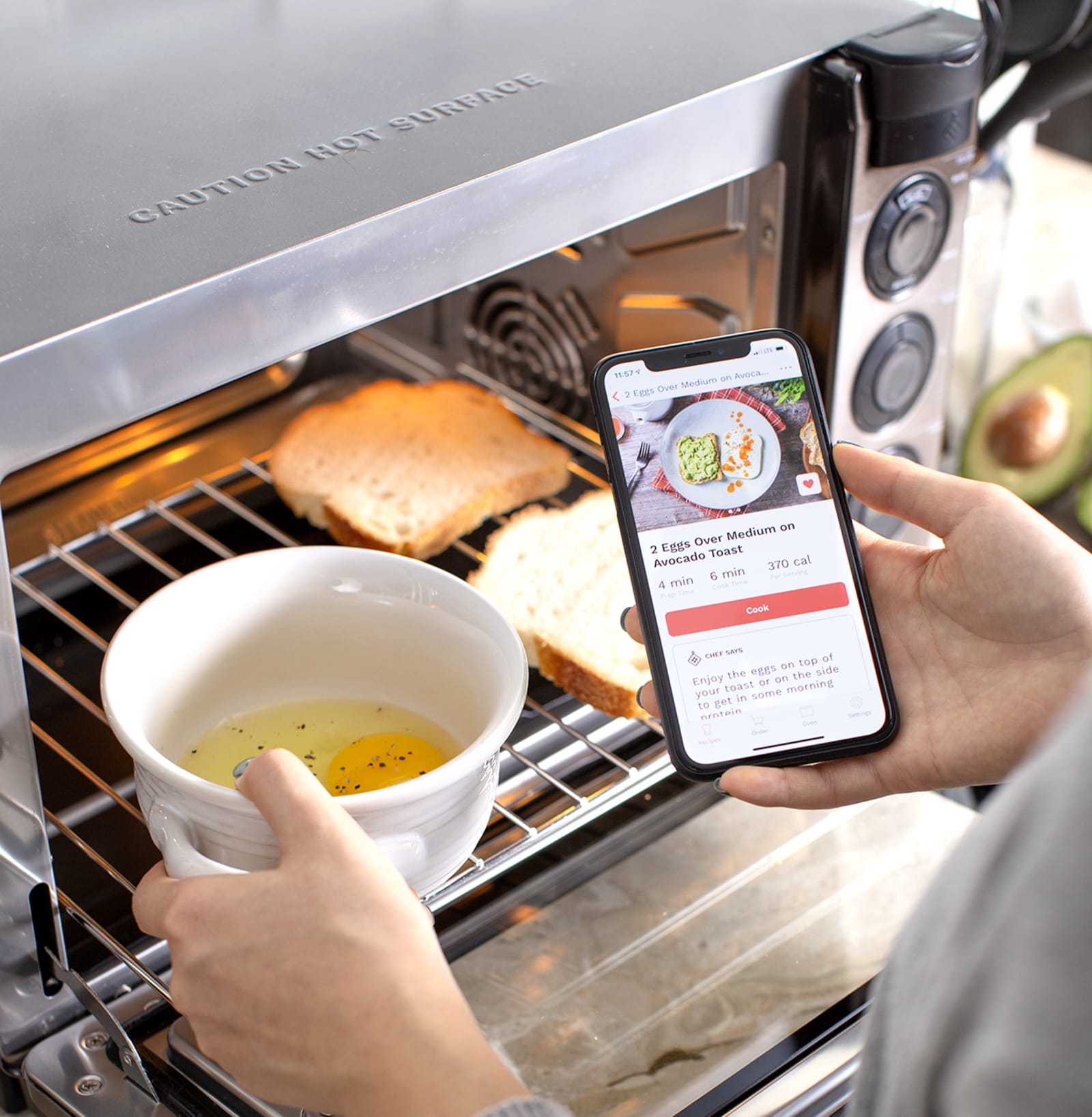 In addition to new hardware, Tovala has also redesigned the app with a lot more recipes, just in case you feel like using it as a regular oven. According to co-founder David Rabie, the oven even replaces some of the functionality of the microwave, because you can usually use steam to reheat most leftovers. You can also now use the app to control the oven over wi-fi, order more meals and design your very own recipes.

While I thought the meals were good, I can't help but feel that the food packaging was a little wasteful. According to Tovala, all of the packaging can be recycled, but I don't think that's always the case with plastic wrap. Of course, the convenience might outweigh it for you, but it's something to keep in mind if you have an eco-conscious bent. 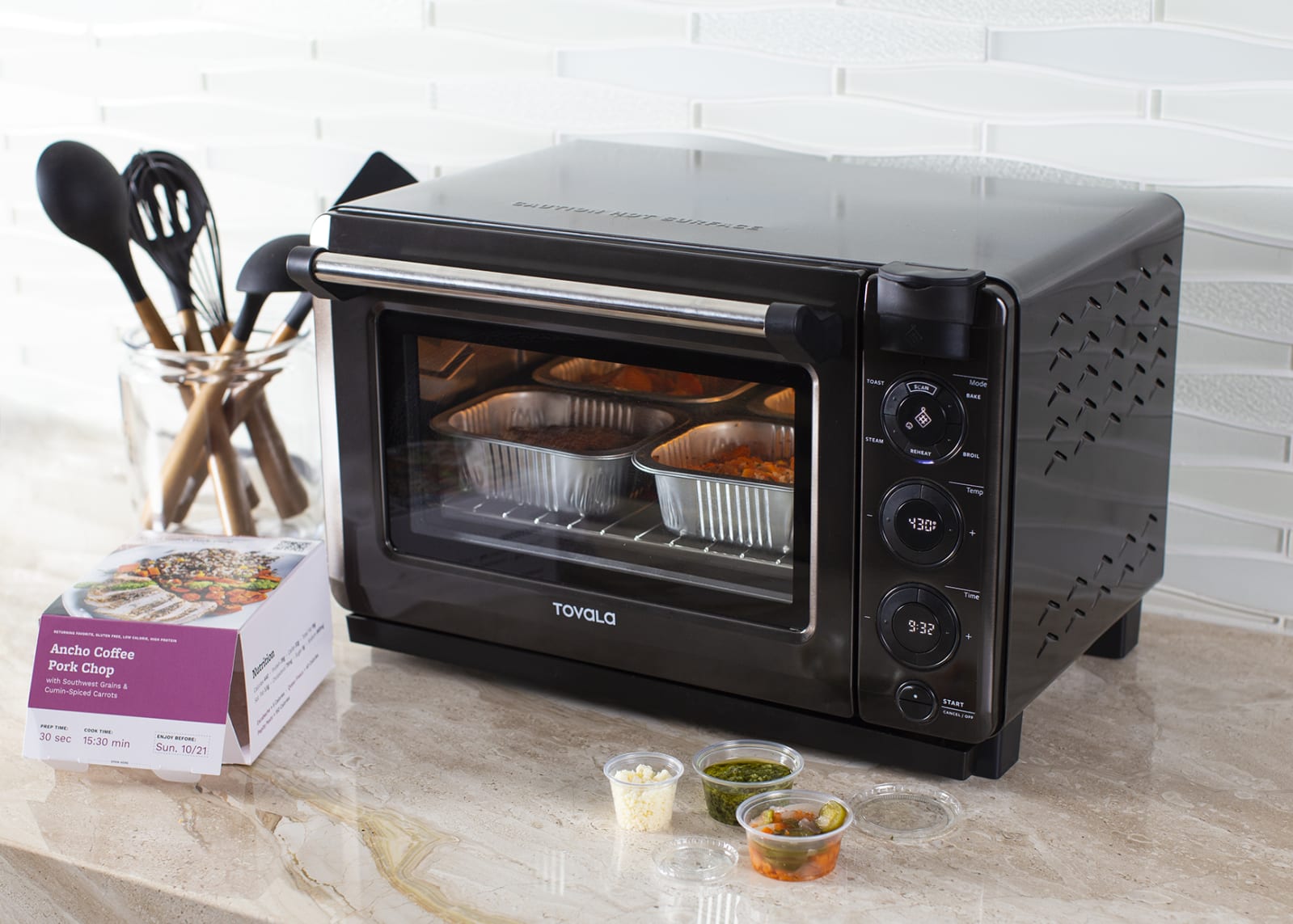 One competitor to the Tovala is the June Oven, a smart oven that has over 100 cooking presets. Just slide in whatever food you want, and the built-in camera will recognize what you want to cook and recommend how best to cook it. June also recently partnered with Whole Foods, where you can select one of 30 365 Everyday Value items and it'll cook them with minimum effort. The June is certainly more expensive at $600, but it's also a lot more versatile.

In the end, though, the Tovala is really for those who want the freshness of home-cooked food but don't want to go through the whole trouble of cooking. Even though you can use the Tovala like a normal oven, clearly the reason to get one is for that delivery service. You can order three to 12 meals a week, as well as individual servings in case you prefer one over another. Each meal is $12, which I think is pretty expensive, but might be worth it if you're spending a lot on takeout or dining out already. There are usually a couple of vegetarian and gluten-free options a week as well.

The normal retail price of Tovala is $349, but if you sign up for 100 Tovala meals within a year of purchase, you'll receive $100 off, effectively making it $249. Seeing as most high-end toaster ovens are around $200 anyway, the Tovala could be worth checking out if you're a lazy cook.

In this article: gear, home, oven, smartoven, tovala
All products recommended by Engadget are selected by our editorial team, independent of our parent company. Some of our stories include affiliate links. If you buy something through one of these links, we may earn an affiliate commission.