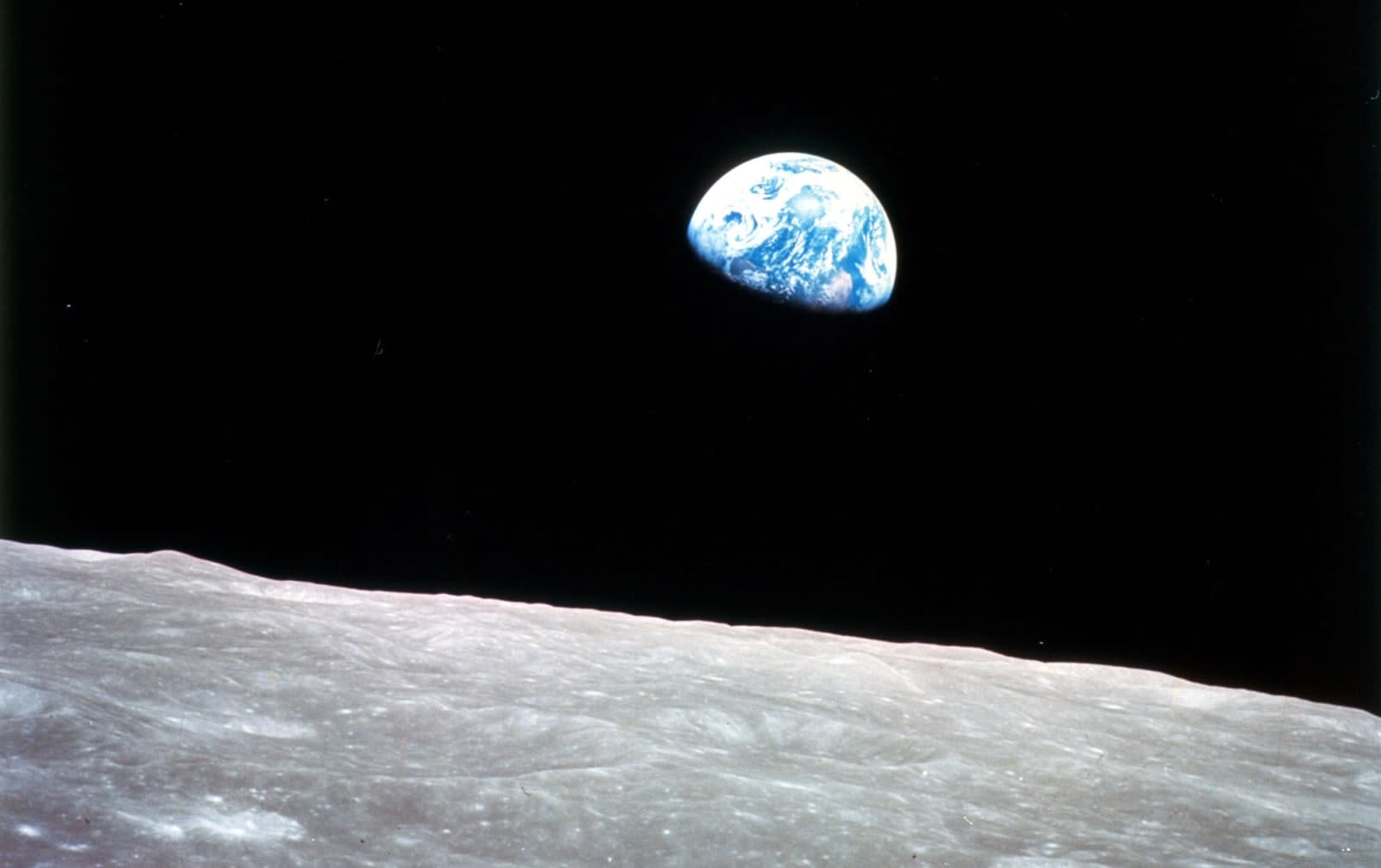 The most famous photo ever taken from space, Earthrise, is 50 years old today. It's so iconic that we now take it for granted, but it may have had a greater impact on humanity than any photograph ever taken. Far from being planned, astronaut Bill Anders snapped it during the ground-breaking Apollo 8 mission on the spur of the moment. "Suddenly we saw this object called Earth," Anders told the Guardian. "It was the only color in the universe."

The 1968 Apollo 8 mission was crucial in the race to get a man on the moon. It was the first manned launch of the colossal Saturn V rocket, which had only flown twice before in unmanned test missions. It was also the first manned spacecraft to escape Earth's gravity, reach another celestial body, and orbit it. It took nearly three days for the crew to reach the moon, and after a tense four minute engine burn -- which could have flung them into space or crashed them onto the Moon's surface --they successfully entered orbit.

The astronauts were equipped with a highly modified Hasselblad 500 EL with the reflex viewfinder replaced by a mechanical sighting ring. They were fully trained in its use and in photography principles and had access to both 70mm color and black and white film. Commander Frank Borman happened to be turning the command module when it came around on its fourth orbit on December 24th, and the Earth appeared as a blue jewel against the Moon's drab monochrome surface.

Borman reportedly took a black and white photo of the Earth in a slightly lower position next to the moon, but Anders thought the shot would be worthy of color. The conversation among the crew at that moment was famously recorded for posterity (above), and reveals what happened next.

Anders: Oh my God! Look at that picture over there! There's the Earth coming up. Wow, that's pretty.
Borman: (Joking) Hey, don't take that, it's not scheduled.
Anders: (laughs) You got a color film, Jim?
Hand me that roll of color quick, would you...
Lovell: Oh man, that's great!

Anders didn't get the film loaded quickly enough to take the shot from the main window, but noticed that the scene was still visible from the hatch. Crew member Jim Lovell wanted to grab the camera to take several more, but Anders amusingly chided him. "Wait a minute, just let me get the right setting here now," he said. "Calm down, Lovell!"

Anders knew he got it ("Aw, that's a beautiful shot!") and said he took it at 1/250th of a second at f/11. He took a couple more at slightly different exposures to make sure, though.

The crew splashed down on December 27th, along with the famous photo. After Anders loaded the film, the next person to handle it was NASA chief of photography Dick Underwood early in 1969. The development of the seven rolls, containing 865 frames, was undertaken with the same level of precision as the rest of the mission.

"I took them to my area of the photo lab where we had a special processor that I had built for Apollo space film," Underwood told the Independent in 2009. "We gave that very thin film tender love and care. There was no room for error. Failure was not going to happen."

The photo was first published in early 1969 and reportedly inspired the first ever Earth Day in 1970. It has been a touchstone for the environmental movement ever since. "The vast loneliness is awe-inspiring and it makes you realize just what you have back there on Earth," said Lovell.