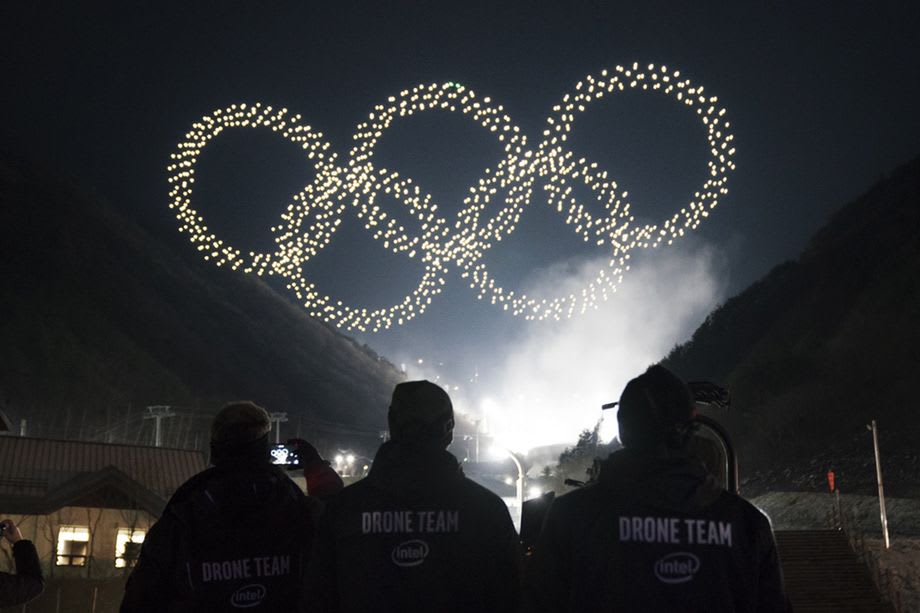 The Winter Olympics' opening ceremony took place today in Pyeongchang and it featured a light show from a record-breaking 1,218 drones, Wired reports. The display was created with Intel's Shooting Star drones, the same ones used in Lady Gaga's Super Bowl halftime show last year and Intel's CES keynote in January, and featured drone murmurations that depicted images like a snowboarder and the interlocking Olympic rings.

The Shooting Star light show was pre-recorded, just like Lady Gaga's American flag, but that's because Pyeongchang can get very cold and very windy. Neither of those conditions are great for drone performance. Further, while Intel initially planned to also put on a live performance during the ceremony, the city's weather on-the-ground logistical issues forced the company to cancel the show. However, the company is planning on doing smaller-scale, 300-drone shows during the medal ceremonies and it has tweaked the Shooting Star's design a little in order to accommodate South Korea's weather conditions. The rotor cages were changed for more stability in high winds and the drones were tested in Finland prior to the Games in order to make sure they could function in low temperatures.

For the remainder of the Olympic Games, Intel will have weather monitoring and air traffic stations determining whether the drone shows can go ahead, Wired reports. So while they may not happen every night, there's a good chance you'll get to see a few light shows if you're watching the Winter Olympics.

Update: An Intel spokesperson informed us that the live opening ceremony drone show was cancelled due to logistical issues, not Pyeongchang's weather as was initially reported. They said that there are many factors that go into a drone performance of this size and the team decided not to proceed with the live version.

Via: Wired
In this article: drone, gadgetry, gadgets, gear, intel, shootingstar, WinterOlympics2018
All products recommended by Engadget are selected by our editorial team, independent of our parent company. Some of our stories include affiliate links. If you buy something through one of these links, we may earn an affiliate commission.