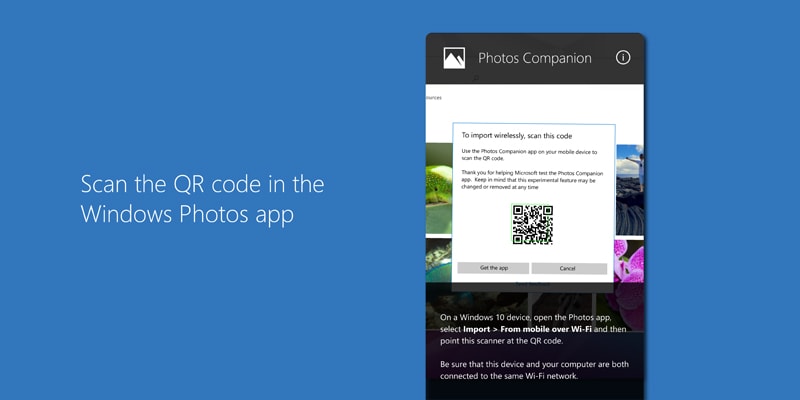 Microsoft Garage makes all kinds of mobile apps for iOS and Android. Some, like the Hub keyboard for iPhone, are experiments; others, like the News Pro app, are a bit more long-term. The team's most recent foray into mobile apps is Photos Companion, an app that easily moves photos from your phone to your Windows 10 PC over WiFi.

According to Microsoft, when its Photos app was redesigned in 2017, the product team headed out to various US and European classrooms to see how teachers were incorporating videos and images into their curriculum, and to encourage them to use the app. The biggest issue wasn't the app itself, the team found, but the hassle of getting media from smartphones to classroom PCs. The new app was created to help kids get content from multiple phones into one project PC, from which they could assemble their multimedia presentations.

With the Photos Companion app on your iOS or Android phone, you just scan a code on your Windows 10 Photos app, then select the media you want to transfer. The rest of the process takes place over WiFi, making it an alternative to something like AirDrop, which only works with Apple devices. While the app was created for students and educators, it'll likely be useful for anyone who needs to get their media onto a PC without having to find a cable.

Via: The Verge
Source: Microsoft
In this article: android, gear, ios, microsoft, microsoftgarage, mobile, photos, photosapp, photoscompanion, windows10
All products recommended by Engadget are selected by our editorial team, independent of our parent company. Some of our stories include affiliate links. If you buy something through one of these links, we may earn an affiliate commission.