As a cranky, childless adult in her late thirties I've largely missed the boat on personal transportation trends like Razor scooters, Heelys and hoverboards. This year Razor manages to combine all of those things into its new Turbo Jetts e-skates: It's the sort of thing that your inner child will love, even as your adult self screams, "Get off my lawn!" The hard plastic skates go over your existing footwear, and will snap over shoe sizes youth 12 to adult 12. One of the skates has a removable lithium-ion battery, which you'll wear on your dominant foot. Neither skate is particularly heavy and, while not exactly petite, they're still small enough to be stowed away in a bag or backpack for a day at the playground or office.

The battery lasts for about 30 minutes, though it's really dependent on the weight of the person wearing them: Smaller children might be able to squeeze a few more minutes out of them, while adults pushing the skates' max weight of 176 pounds will have to recharge a lot sooner. Luckily the battery only takes one hour to power up fully: It's a pretty good ratio between play time and charge time, one that ensures that kids won't get too frustrated waiting to use these again. 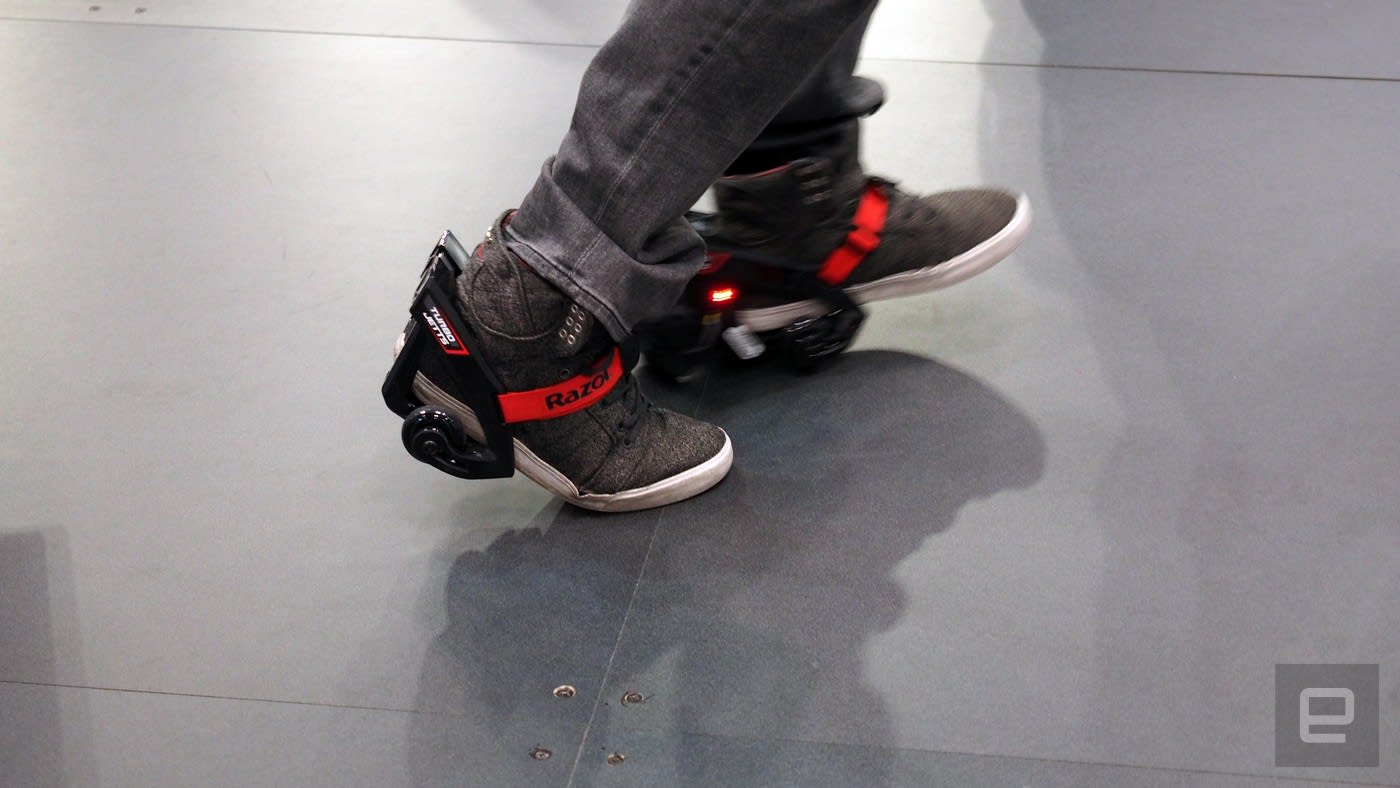 Anyone who's ever worn a pair of Heelys will find using the Turbo Jetts second nature; it's just a matter of pointing your toes up and letting the skates carry you forward at speeds of about 10 mph. The motor activates when the skate comes in contact with the ground, though I personally had trouble getting it going consistently.

Part of the problem is that I've never used Heelys or anything similar. I found myself treating the Turbo Jetts like regular roller skates a lot, as it was hard to overcome that muscle memory. It's not going to work if you do that. After pushing off from the non-dominant foot, you really need to lean back and just let the powered skate pull you forward, keeping the non-powered skate in the rear. Though the bulk of the skates made it unlikely I'd fall backwards, I still couldn't shake the sense I was going to fall on my butt. The need to keep one skate in front will at least keep you from falling flat on your face, but I did end up performing a few unwanted splits.

Even after struggling with the Turbo Jetts and taking a few spills at Toy Fair, I wasn't ready to give them up. Luckily, I don't have long to wait for my own pair -- they're available now for $130, both online and at Toys 'R' Us stores.

In this article: gear, hands-on, razor, skates, skating, toy, toyfair, toyfair2018, toys, transportation, turbojetts, video
All products recommended by Engadget are selected by our editorial team, independent of our parent company. Some of our stories include affiliate links. If you buy something through one of these links, we may earn an affiliate commission.