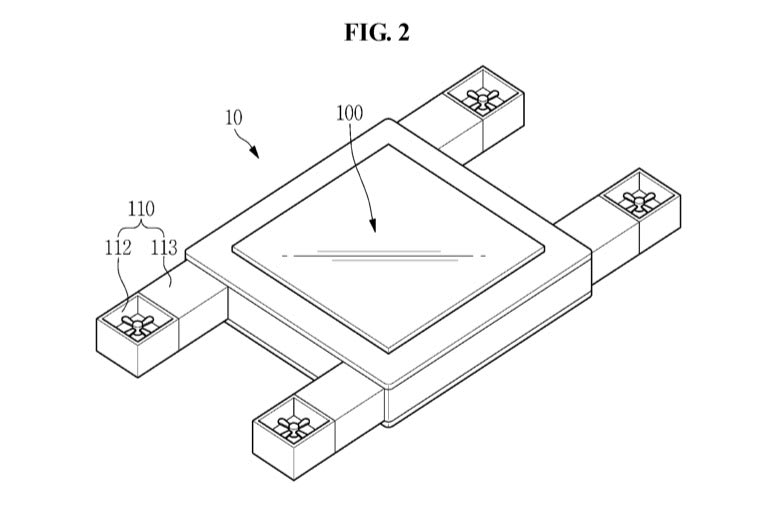 Samsung was awarded a patent by the US Patent and Trademark Office last week for what it's calling a "flying display device." The patent, spotted by LetsGoDigital, was filed for in 2016 and describes a drone-like device with a screen that could be capable of streaming video, like, for example, broadcast television, but, as The Verge points out, it could also presumably be used as a hovering advertisement display. According to Samsung's patent, the flying screen would be supported by four propellers and could have features like voice recognition, a vibration system, an obstacle detection unit with a camera or a sensor as well as gyro, motion and accelerometer sensors. And the display could be a range of devices, including a tablet, a laptop or a mobile medical device.

Additionally, the proposed design shows that the drone could be able to track a users' eyes, head or hands and would be able to be controlled based on movements of those parts. The system may also be able to track a user's pupils and adjust the position of its screen based on the angle of their gaze. That might be fun when it's your tablet following you at home so you can watch a movie while you do your chores, but it may not be as great when it's a hovering ad following you down the street. Luckily, it's just theoretical for now, and there's no guarantee it will ever come to fruition. But at the very least, it gives us an idea as to what directions these companies are considering taking this technology.

Via: The Verge
Source: USPTO
Coverage: LetsGoDigital
In this article: advertising, display, drone, EyeTracking, gadgetry, gadgets, gear, MotionDetection, samsung, screen
All products recommended by Engadget are selected by our editorial team, independent of our parent company. Some of our stories include affiliate links. If you buy something through one of these links, we may earn an affiliate commission.