"I feel like I can justify the worst things I've done."

"My initial connection to the majority of my partners is based on superficial sexism."

"I once bumped someone's phone when it was charging and it fell off a table and cracked and I just walked away."

The experience of reading anonymous confessions is both intimate and detached. Being confronted with people's real-life emotional baggage reveals quiet but deeply human moments, yet divorced from the person who said them, there's no human to project the resulting empathy on.

I read the divulgences above at The Future of Secrets. At the heart of this SXSW installation is a solitary laptop that asks, "Do you have a secret?" You type your confession and hit enter, and it heads into a database of thousands. Seconds later, a receipt printer hums and pushes out someone else's revelation -- a reward. Meanwhile, your disclosure will be repurposed according to an opaque algorithm.

Across the room, steady robotic voices read the messages over headphones, sometimes in faint whispers, giving the sense that you're privy to a confession. On one wall, projections of secrets pop into view then fade away, mimicking a restless mind of fleeting thoughts, some banal, some disturbing. On another wall runs an infinite scroll of the code that converts written secrets into audio. To the layperson, it appears that your thoughts are being processed and crunched, but you don't know how. A second receipt printer convulses apparently at random, spitting out secrets onto neat rectangles of thin, disposable paper. I contributed my disclosure knowing it could appear minutes later in this room or in several months, perhaps in the next city the installation travels to. 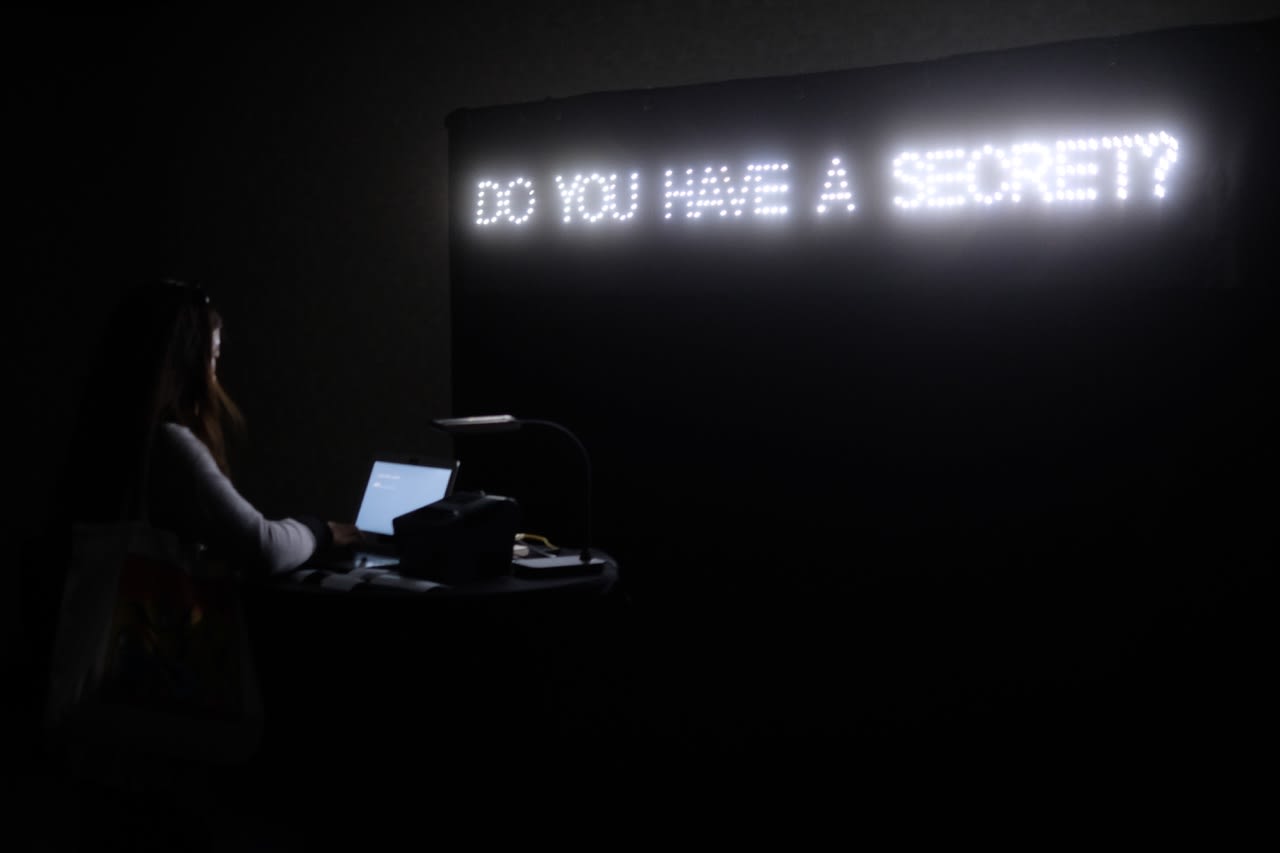 For the three creators -- Sarah Newman, Rachel Kalmar and Jessica Yurkofsky from Harvard University's metaLAB and the Berkman Klein Center for Internet & Society -- the project stems from an interest in what will happen to our immortalized digital communications in the far future. This is the eighth time that a variation on this project has exhibited, while drawing on and growing the database of secrets, whether in Boston, Berlin or Rome.

It reflects what we do on social media all the time: give up secrets without knowing where they'll end up and receive the details of others' lives as compensation for providing our own.

But it also differs from the way Google, Facebook, Amazon or the myriad apps we sign up for harvest our data. Online, we tap out mundane messages or buy household supplies and companies infer our secrets; here we are asked explicitly to admit our thoughts. The Future of Secrets is also strictly anonymous: There are no cameras in the room or ways to trace a secret back to its teller. (During SXSW, secrets can also be submitted online; Newman told me the website tracks nothing but the confession and its time of submission.)

This strict decoupling of the confession from confessor is liberating and draws attention to the fact that we can't usually feel so safe in our disclosures online -- there's always a sneaking suspicion our data could be used for nefarious purposes, justified by a sentence buried deep in the terms and conditions. Like the mid-2000s postcard project PostSecret, this installation shows the value of anonymous secrets. Unlike with apps that have tried to replicate the experience such as Whisper, we can write without a creeping feeling of being tracked.

The result is a kind of catharsis. People confess that they find Bernie Sanders sexy, fear tiny dollhouses or have a picture of Conan O'Brien in their retainer. Plenty admit to infidelity, sexual expression or childhood shame. While these may feel like a burden to the individual, displayed alongside dozens of others' secrets they almost seem commonplace. People send dispatches from their darkest core and realize they're practically trivial. 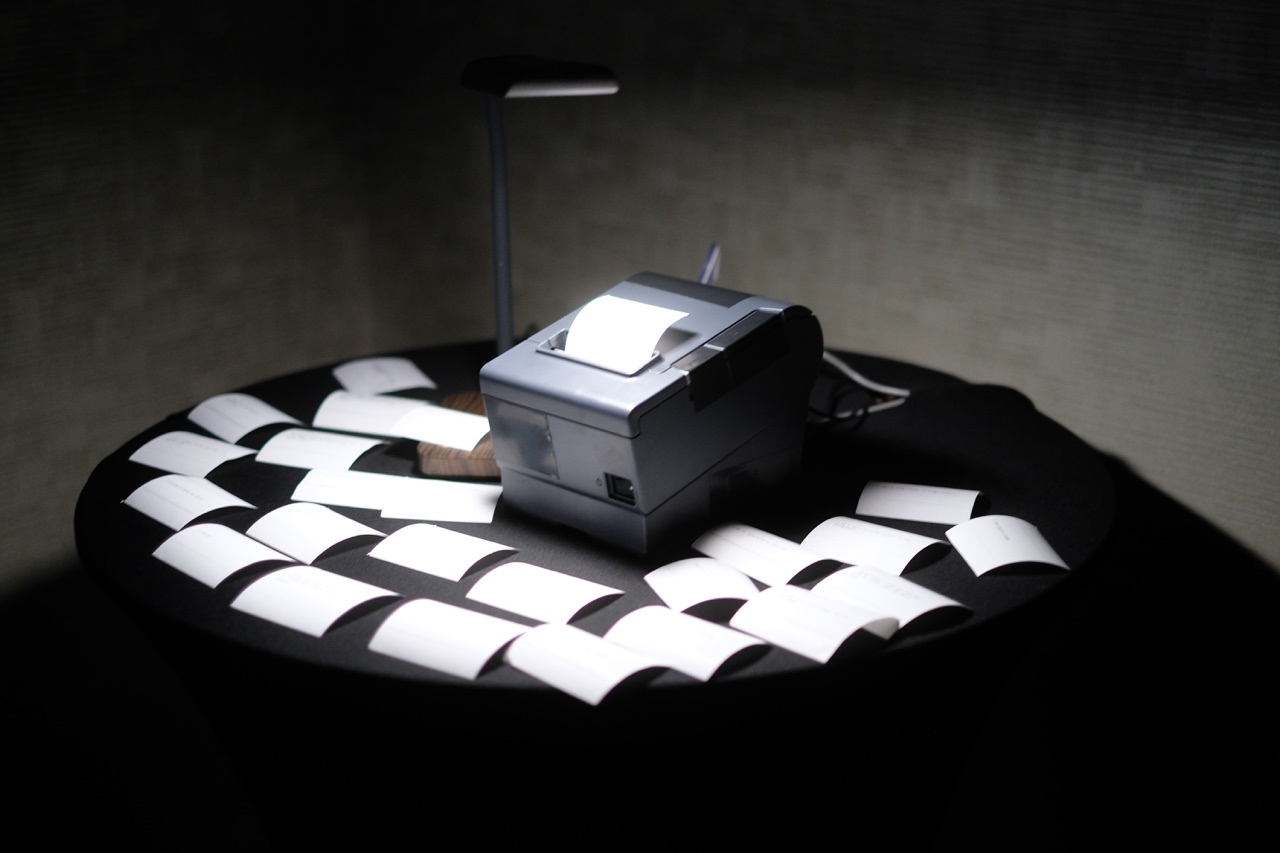 "It's so rare that you have the opportunity to share something which really is not connected back to you," said Kalmar. "I don't post things on social media which I don't want to be public and permanent because they're connected to my persona ... I wish I could say something like, 'It's Friday night. I'd like to hang out with other people. Does anybody want to have dinner?' But I'll never let myself post that."

Exposure to all of these authentic insecurities has a humanizing effect. You don't know who said what, but you become conscious that strangers -- all strangers -- have their own issues and quirks.

"I actually think that one of the hopes of the piece is making people feel more compassionate and also more humble," said Newman. "That said, it's embedded with a certain critique of the way we rely on technology. ... I think there is a darker side that it's important to be aware of."

The tension between ominousness and sentimentality is what makes The Future of Secrets compelling. You can't forget the sketchiness of data-privacy issues when you see people's revelations embedded in code. And you can't remain purely cynical when bombarded with sentimental regrets or absurdities.

At SXSW, where the go-getters in arts, entertainment and technology are pitching their wares, "activating" their brands and networking with relentless optimism, it's refreshing to step into a dark, silent room for a moment and reflect on the experiences we may have in common that are rarely shared out loud.

In this article: art, gear, harvard, jessicayurkofsky, privacy, rachelkalmar, sarahnewman, security, sxsw2018, thefutureofsecrets
All products recommended by Engadget are selected by our editorial team, independent of our parent company. Some of our stories include affiliate links. If you buy something through one of these links, we may earn an affiliate commission.