Alex Garland wrote 28 Days Later, Sunshine and Dredd, establishing his bona fides as a master of blending horror and mind-bending sci-fi. He then wrote and directed Ex Machina, which propelled him into an elite fraternity of directors producing smart, arty films that stick with you long after you leave the theater. His latest film, Annihilation, was set to be his big mainstream breakthrough, but it will be released theatrically only in the US, Canada and China. In the rest of the world, the film will play on Netflix. Does that mean everyone in the rest of the world is losing out by having to watch it in the comfort of their own homes? We asked two of our editors -- one in New York and one in London -- to report their respective experiences. After seeing Annihilation in a packed New York City theater on opening night, I had two thoughts. I was grateful to experience such a gorgeous, transcendent film with a group of strangers, on a giant screen that demanded our attention. And I felt sorry for audiences outside of the US, Canada and China who won't have the opportunity to experience it in theaters. If this is the future of film distribution, I fear that we're losing something essential.

As someone who deeply admired Alex Garland's Ex Machina and Jeff VanderMeer's original novel Annihilation, my expectations were high for the movie. But I was a bit worried when Paramount announced its unusual split distribution strategy. Not so much because I feared it meant the film was bad; rather, it seemed as if the studio was just dumping it to make some quick cash, instead of doing the work to get people into theaters. I suppose that's understandable for Paramount, though, following a string of box office failures and a rough few years of earnings. Ex Machina also suffered at the box office internationally, making a mere $11.4 million (on top of its $25.4 million domestic gross). A Netflix deal would certainly fetch more for Paramount, and, of course, it would give even more people access to the film.

I'm sure I'll enjoy watching Annihilation at home, but I'm also a movie nerd with a projector and an extensive surround sound setup. If you're just watching it on a TV or -- movie gods forbid -- on your laptop or tablet, you'll definitely miss out on the film's epic scope and rich sound design. Several sequences seemed purposefully built to be experienced with a crowd on an enormous screen. A scene with a monster prowling through a room, as our intrepid explorers can only sit trembling, praying not to get attacked, had my audience holding their breath. (I could tell from the collective sigh of relief when it was all over.) The film's astounding finale, a dialogue-free visual feast that would be right at home at the Museum of Modern Art, felt almost like a collective religious experience.

Perhaps that's the best way to put it. Seeing a film in a theater, especially a film as masterful as Annihilation, is a bit like going to church. It soothes my soul, and I feel even more at ease when I'm with an audience that's seeing the light. At home on my couch, it's like trying to find enlightenment from a televangelist. Seeing Annihilation for the first time on the small screen left me with the sense that I'd missed something from the whole experience. It's the first time I've been denied the opportunity to watch an Alex Garland movie in a cinema, which is how I'd experienced all of his work thus far, from 28 Days Later onward.

Whether he's writing or directing, Garland's work resonates with a paranoid, woozy energy that amplifies the skin-tearing tension. But, as slow and tense as Annihilation is, it's hard to be as gripped in your living room as you are in a cinema.

If you want to get pedantic about it, there's a film theory term -- scopophilia -- which denotes the pleasure you get from watching something. And in a big, darkened room full of similarly awestruck viewers, you're more drawn into the world unfolding in front of you.

And Annihilation has one hell of a world, full of weird, off-kilter visuals that mix the joy of nature with extreme body horror. But I wouldn't go so far as to say that the film has -- as Devindra says above -- an "epic scope and rich sound design."

On a TV screen, the Floridian visuals aren't too broad or deep, but claustrophobic and tight, and in my notes I wrote that the film "isn't cinematic." It didn't look like a $40 million movie, but perhaps that's because the TV sapped all of those lush visuals and made it look more pedestrian. 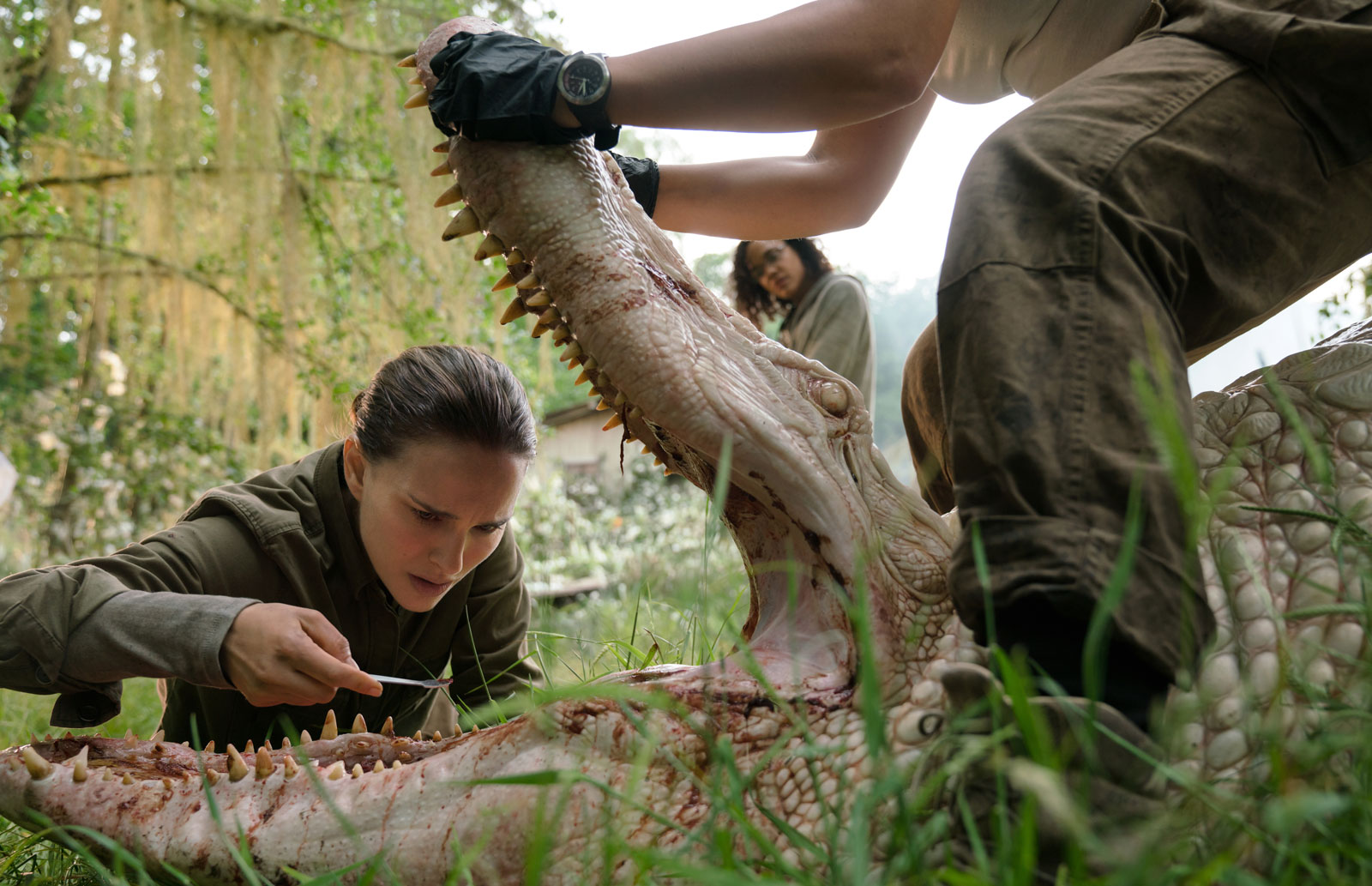 That said, a lot of the film is composed of medium-frame shots, and you'll be spending a lot of time looking at Natalie Portman staring out beyond the frame. Nothing wrong with that, of course, but if you'd told me this was a TV movie on a quarter of the budget, I would have believed you.

And that's something that affected Garland's last movie, too, since Ex Machina was essentially a series of scenes in which two people talk in a room. It's an impeccable movie, but one that just as easily could have been a theatrical production rather than a cinematic one.

It's the same with the sound design, which I'm sure was much more terror-inducing in a cinema than being pumped out my admittedly piddly soundbar. In the future, I'd love to get a beefier setup, but then, it's not as if -- in a town house with a toddler -- I'd ever get the opportunity to use it.

The behind-the-scenes saga of why Annihilation came to be on Netflix is a fascinating one, especially since Paramount is now using Netflix as a dumping ground. This and The Cloverfield Paradox were both medium-budget sci-fi movies that the accountants were nervous about releasing.

I should add that Annihilation is as brilliant as Ex Machina, even if it lacks that movie's exploration of such a stone-cold sci-fi premise. It's also one of a small handful of thought-provoking films that seem to have "tentpole classic of the genre" nailed on them from the moment they're released.

In this article: AlexGarland, Annihilation, art, Distribution, entertainment, ExMachina, internet, Netflix, Paramount
All products recommended by Engadget are selected by our editorial team, independent of our parent company. Some of our stories include affiliate links. If you buy something through one of these links, we may earn an affiliate commission.