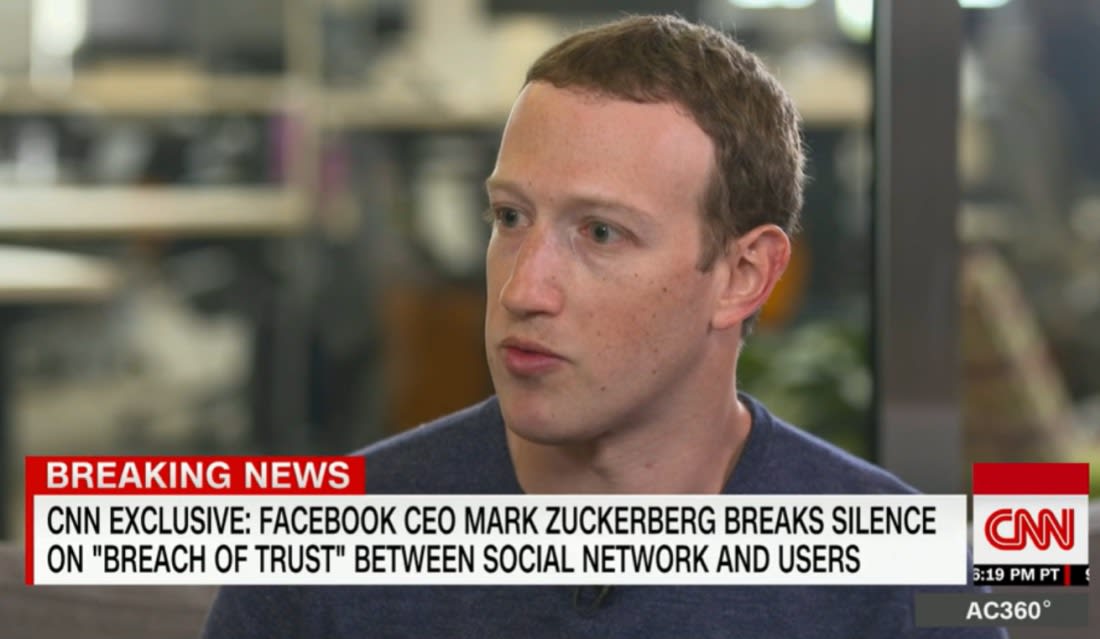 Given the news that has broken over the last few days about the collection and use of Facebook data by Cambridge Analytica, there's been an expectation that the company's leaders will speak out and tonight Mark Zuckerberg finally did. Following up on his Facebook post and rollout of some new rules and policy initiatives, the CEO granted a rare on-camera interview with CNN, and also spoke to others like Wired, the New York Times and Recode.

In the interviews, the first difference that jumps out is the presence of an actual apology for... something. As Zuckerberg said to Recode, "We let the community down and I feel really bad and I'm sorry about that."

A statement that may have more lasting meaning is his response to a CNN question about whether or not Facebook should be regulated. Zuckerberg said "I actually am not sure we shouldn't be regulated," and also referenced how the company's reaction to "bad actors" who try to manipulate elections has changed. While in 2016 it was not as proactive, he pointed out Facebook's use of AI tools during the French election and subsequent events around the world to detect and filter out the use of fake accounts.

Facebook CEO Mark Zuckerberg says he is "sure someone's trying" to use Facebook to meddle with the US midterm elections. "There are going to be some new tactics that we need to make sure that we observe and get in front of" https://t.co/W2WMtTnBpw pic.twitter.com/ooMGj3TfXR

.@LaurieSegallCNN: "Knowing what you know now, do you believe Facebook impacted the results of the 2016 election?"

Mark Zuckerberg: "Oh that's -- that is hard. You know, I think that it is -- it's really hard for me to have a full assessment of that." https://t.co/m3F79UMHd8 pic.twitter.com/y41ON2LatL

Facebook CEO Mark Zuckerberg said the company will proactively reach out and notify "anyone whose data might have been affected" by the massive Cambridge Analytica data breach. https://t.co/DojUEzPh5O pic.twitter.com/zbBOCpMDuR

Facebook CEO Mark Zuckerberg says he is "happy to" testify before Congress "if it's the right thing to do" https://t.co/QLmFe43vp2 pic.twitter.com/0UH7WVxqW9

Source: Wired, New York Times, Recode, CNN
In this article: breach, cambridgeanalytica, data, entertainment, facebook, internet, markzuckerberg
All products recommended by Engadget are selected by our editorial team, independent of our parent company. Some of our stories include affiliate links. If you buy something through one of these links, we may earn an affiliate commission.