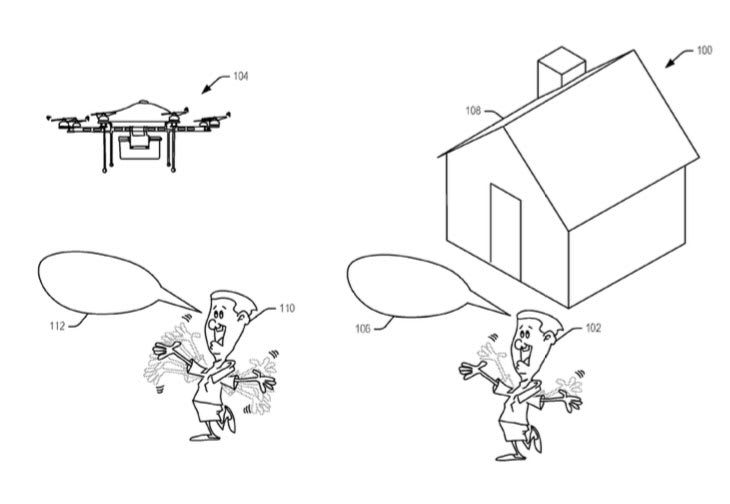 Amazon was just issued a patent for a UAV that can interpret gesture and vocal commands, a device that could in theory be used to deliver packages. First spotted by GeekWire, the patent describes a drone-like device outfitted with various sensors, cameras and other equipment that could recognize gestures such as a person waving it towards them or someone shooing it away. In some very entertaining illustrations, the patent shows the UAV approaching a human who's waving at it wildly.

This isn't the only device that incorporates human gesture as a control mechanism. DJI's Spark drone can be directed with arm movement and a recent Samsung patent shows a drone that can track users' eyes, heads and hands and can be controlled through gesture.

Amazon's patent says the UAV could be loaded up with light sensors and cameras, auditory sensors and output devices like speakers or a laser projector. Of course, as is always the case with these things, there's no guarantee this device will ever see the light of day. There are plenty of patent designs that have never come to fruition. Some other recent Amazon patents include a mirror that can virtually dress you and a wristband that tracks warehouse workers' hand movements.

Via: The Verge
Source: USPTO
Coverage: GeekWire
In this article: amazon, DJI, drone, gadgetry, gadgets, gear, patent, samsung, uav, uspto
All products recommended by Engadget are selected by our editorial team, independent of our parent company. Some of our stories include affiliate links. If you buy something through one of these links, we may earn an affiliate commission.