A boy dangling from a tree in a barren desert. A forest filled with standing stones that have circular holes punched through them. Turtle-riding cats. Spooky caves. Curious elephants. These are just a few of the shots in the first trailer for Away. The 3D animation is far from perfect, but there's a clear, distinctive style throughout. The most impressive part, though, is revealed in the video's description: "Animated feature film by Gints Zilbalodis." Unlike the latest Pixar movies, Away is being made by just one person. It's a colossal challenge, but one that the 23-year-old animator has been building toward for eight years. 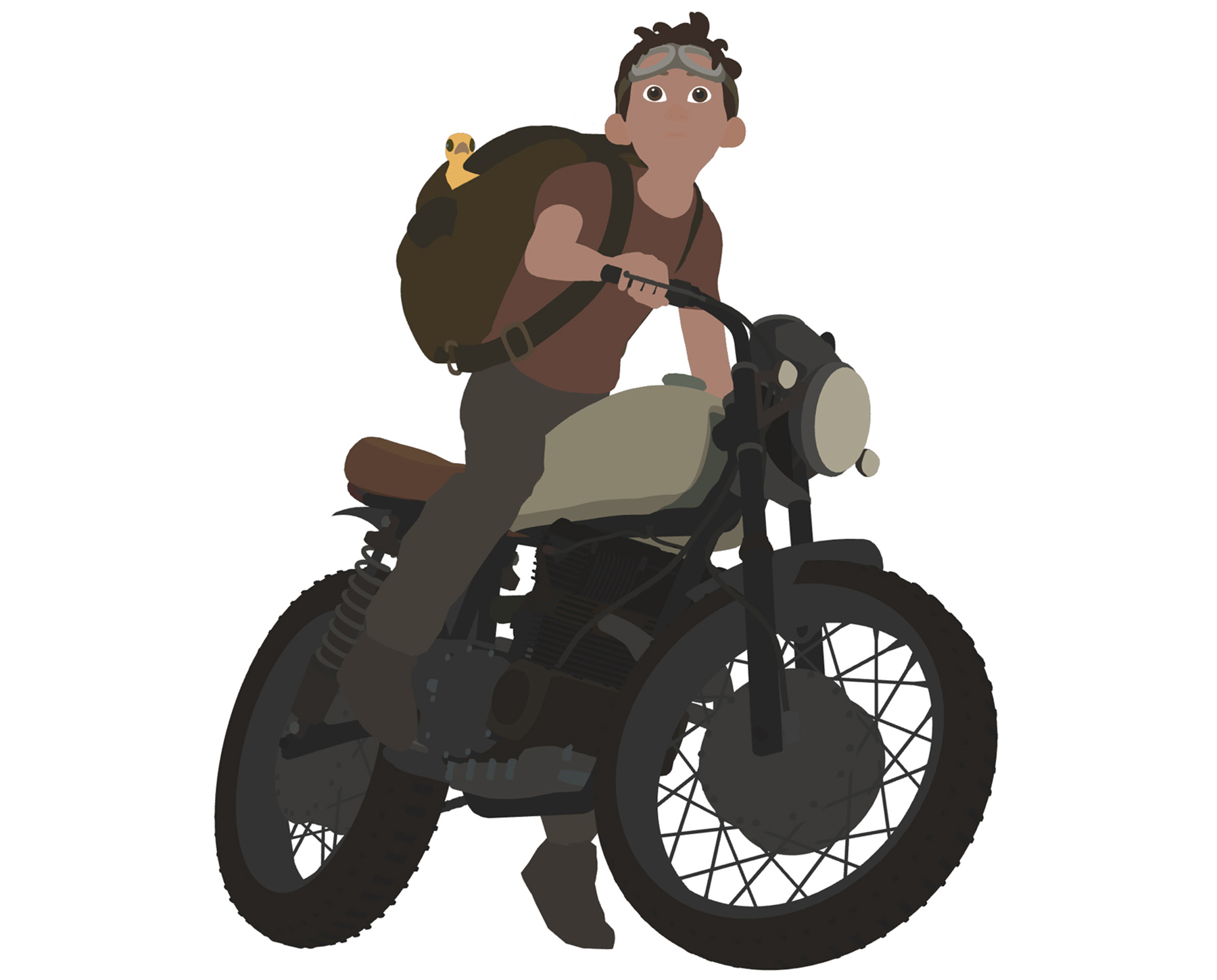 Zilbalodis grew up in the Latvian capital of Riga. His parents met in art school, so it was no surprise that he quickly fell in love with illustration and filmmaking. As a bright-eyed 15-year-old, he made a two-minute short called "Rush," with a "pretty old iMac" and a piece of software called Toon Boom. The hand-drawn tale depicts a boy crossing a busy road and narrowly missing a flurry of cars. As he contemplates his near-death experience, another car honks its horn, causing the youth to twist his head and accidentally walk down a manhole. "I was attempting to make something funny," Zilbalodis said, "but that's not what I'm good at."

The budding animator enrolled at JRRMV, an art-centric high school in Riga, where he worked on a short called "Aqua" in his spare time. The film revolves around a cat that has to overcome its fear of the ocean. Zilbalodis "isn't really sure" where the idea came from, but he had a cat -- his family's first -- called Josephine at the time.

As the film progresses, the sea-trapped moggie learns to dive into the water, catch fish, and swim back to the surface like a kingfisher. Zilbalodis had followed a classic narrative structure called the hero's journey (character goes on an adventure, overcomes great odds and comes home changed), but he did so by accident: He only realized it after reading a pile of screenwriting books, including the revered The Writer's Journey: Mythic Structure for Writers, by Christopher Vogler.

The cat was little more than a stick figure, because Zilbalodis "couldn't draw very well." The short is also stuttery, because he was "lazy" and used "very few frames." Still, it was good. The shots were dynamic, and the music, performed by his childhood friend Bertrams Pauls Purvišķis, was a perfect match. Zilbalodis' teacher and parents urged him to show the film at a theater owned by his uncle. He eventually caved and invited the entire school to what became an informal premiere. "The only time I could get was in the morning," he said, "while classes were happening at school. So I had to arrange a school trip for everyone."

Zilbalodis posted "Aqua" on Vimeo the same day. He refreshed the page every hour and was taken aback when it was selected as a Staff Pick. "At that time, Staff Picks were worth so many views," he said. The coveted recommendation meant it was quickly seen and covered by animation blogs. Later, he posted the video to YouTube and Newgrounds. The latter, which rose to fame in the early noughties as a place for independent Flash animation, had been a big influence on Zilbalodis as a child. "Aqua" was one of the first videos to be uploaded in HD on the site.

"I invited the entire school to the premiere."

At this point, the Latvian animator realized two things. The first was that he didn't want to work in a large company. He enjoyed every part of the filmmaking process and hated the idea of specializing. The second was that he wanted to switch to 3D, because the medium would cover his sub-par drawing skills and facilitate more complicated camera moves.

Zilbalodis spent the next 18 months working on a short called "Priorities." The film is about two castaways -- a pilot and his dog -- who crash in a secluded cove and try to escape on a makeshift raft. Stormy weather, though, knocks the lovable canine into the ocean, and the man is forced to pick between salvation and his best friend. "At the time, my family had its first dog," he explained. "So just like the cat [in "Aqua"], I was inspired by the animal."

The film is nine minutes long and consists of just four shots. Zilbalodis was imitating Alfonso Cuarón, the Mexican film director behind Gravity and Children of Men, and his cinematographer Emmanuel Lubezki. The pair are known for their prolonged, uninterrupted shots that show more of the world or a string-like connection between characters. Zilbalodis also experimented with handheld camera movements inside his 3D world. The teenager was worried that the film would look like a video game and hoped this imperfect style would give it a more organic feel. "It's a kind of mixture between a handheld and very digital look," he said.

Zilbalodis used Maya, a popular program for video game and animation modeling, to develop the short. He found the application "very hard," however, and struggled to create complex effects. "But actually, that helped me to find my style," Zilbalodis explained. The young director learned to embrace his shadowless character models and simple facial expressions. "The aesthetic of the film was influenced by the things I couldn't do and had to think around," he said. "Many of the decisions I made were done to hide my lack of knowledge."

"Priorities" became his graduation movie. He premiered the film at his uncle's theater and sent copies to a few animation festivals. He also posted it to Vimeo, which was risky, because many festivals refuse films that are already available to the public. The inverse happened, however: The upload was successful and attracted more interest from festival organizers, including some that Zilbalodis hadn't considered before. "I just thought that I couldn't or wouldn't be accepted," he said. The teenager attended a number of festivals that year, including Animafest Zagreb, in Croatia, and one that takes place inside Japan's New Chitose Airport.

Zilbalodis' next film, "Followers," was funded by the Latvian government. It was a small grant, but enough to sustain the filmmaker while he juggled the occasional freelance project. The short is about a robber who is ditched by his partner and forced to spend time in prison. He escapes and befriends a delinquent boy who becomes an unlikely "follower" -- that is, until he recognizes the cycle he's creating and turns himself over to the police.

The visuals are a huge step up from "Priorities." Zilbalodis is "mostly happy" with the film but thinks some of the themes aren't particularly clear. "I think I was using just too many things at the same time," he said. "It's a bit overwhelming to watch." Still, he learned a lot about Maya and complementary software including After Effects and Apple's Logic Pro X. He also concluded that the higher visual fidelity wasn't worth the longer rendering times. "It was very stressful, because when I made a mistake I had to re-render everything," Zilbalodis said.

Next, he made "Inaudible," a short about a deaf musician. It came out on June 18th, 2015, just six months after "Followers." The fast turnaround was enabled by Zilbalodis' new lifestyle, which was free of schoolwork and nonessential freelance projects. But it was also a result of the Latvian government grant system -- with only one contest per year, Zilbalodis had to work quickly to be eligible for funding.

"If I had taken a year off, I would have been forced to find another job or start doing freelance work."

"Maybe I should have allowed myself a bit more time," he said. "But if I had taken a year off, I would have been forced to find another job or start doing freelance work. And I didn't want to do that. I wanted to focus on my own films."

All of these projects have led to Away, a 70-minute feature set for release next year. At the outset, Zilbalodis split the movie into four chapters, or shorts, to help manage the workload and secure financial support from the Latvian government. He made the first chapter, "Oasis," and sent it to some animation festivals last year. "But it wasn't very successful there," he said. The animator thinks it struggled because it's part of a larger story and "doesn't really have a very good conclusion." At 17 minutes, it's also pretty long for a traditional short.

Zilbalodis was undeterred, however. He decided to go back and remake "Oasis" before progressing with the final three chapters. The critical reception also made him rethink how he wants to release the feature; now it will be shown in its entirety only at animation festivals. "I think the story works much better when seen in its entirety," he said. "So now I'm focusing on the feature film; however, I will be maintaining the four-chapter structure."

Away will follow a boy as he befriends a small bird and tries to find his way back home. It's inspired by Future Boy Conan, a post-apocalyptic anime series directed by Studio Ghibli co-founder Hayao Miyazaki in the late 1970s. Zilbalodis is also a fan of The Motorcycle Diaries, a 2004 live-action biopic about a young Ernesto Guevara, and cinematic video games, including Journey and The Shadow of the Colossus.

Working on this project is, in many ways, easier for Zilbalodis than his previous shorts. He knows the complete story, which means he doesn't have to come up with a whole new concept and world for each chapter. "When I finish a chapter, I can jump right into the next one and I already have the characters and designs," he explained. The animator and director still uses the same tools -- Maya, After Effects and Logic Pro X -- but has switched to the Viewport in Maya for real-time rendering. "So it doesn't really take time to render," Zilbalodis said. "Once I make something, it's already rendered and finished."

Ideally, Away will be picked up by a distributor and get a theatrical release. Otherwise, Zilbalodis will consider selling the film through VOD platforms such as iTunes and Vimeo On Demand. And of course, he would like to show the film at his uncle's theater in Riga.

As a one-man studio, Zilbalodis is unusual. But he doesn't seem fazed by the scale of the project, which now stands at "about 80 percent done." The animator points to small and single-person studios that have created hit video games such as Stardew Valley, Cave Story and Axiom Verge. "There's no reason why people couldn't do that in filmmaking or animation," he said. "I think there will be many people doing this in the future."

Source: Gints Zilbalodis (Vimeo)
In this article: Animation, art, Away, CGAnimation, entertainment, Filmmaking, GintsZilbalodis, longread, TL18CG
All products recommended by Engadget are selected by our editorial team, independent of our parent company. Some of our stories include affiliate links. If you buy something through one of these links, we may earn an affiliate commission.