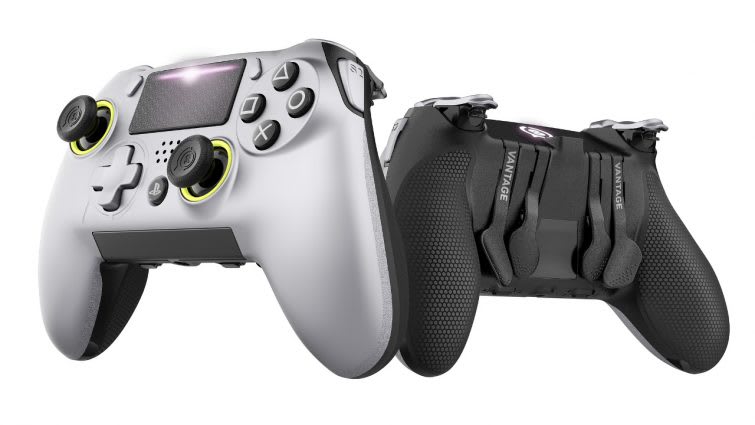 Serious gamers or those looking for more comfort while playing PS4 games might have struggled in the past to find a good alternative to Sony's DualShock 4 peripheral. Xbox One, for its part, has strong replacement options for its regular controller, with the Xbox One Elite and the upcoming Adaptive Controller. However, PS4 fans are about to get a new, official option, as custom controller manufacturer Scuf has a licensed, wireless PS4 peripheral on the way.

The Vantage controller sports a pair of side-mounted, programmable buttons and a second touch bar for audio control (you'll need to connect your controller to your console via USB for that function to work). There are a bunch of cosmetic configurations and customization options, like changing the faceplate or adjusting the height of the thumbsticks. And, if you want to reduce hand fatigue by making the controller lighter, you can yank out the vibration modules.

Similar to other Scuf controllers, the Vantage has a quartet of mappable levers on the rear, which can help players execute actions more quickly. For instance, you don't need to take your thumb off the analog stick to hit the triangle button when your ring finger can just tap a lever mapped to it on the back.

During streamer Ninja's infamous Fortnite session with Drake, the Twitch star recommended the rapper (who plays the game on PS4) use a Scuf controller. Building structures in the game with a standard console controller is tricky, because it requires quickly moving your fingers between buttons. But programming the paddles properly can seriously cut back on hand movement and speed up builds.

It's the first time Scuf has offered an officially licensed wireless PS4 controller in the US and Canada. The Vantage will ship in August and you can pre-order one now -- it costs $169.95 for a wired-only model and $199.95 for the wireless Bluetooth version. However, as the Vantage is still in development, some features might be different when the controller becomes available.

Source: PlayStation
In this article: controller, customization, gadgetry, gadgets, gaming, playstation4, ps4, scuf, scufgaming, scufvantage, sony, vantage
All products recommended by Engadget are selected by our editorial team, independent of our parent company. Some of our stories include affiliate links. If you buy something through one of these links, we may earn an affiliate commission.