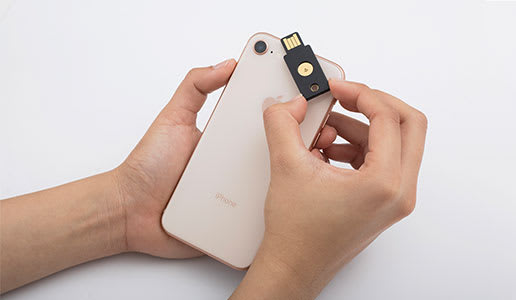 Digital security has always been paramount, but the advent of tablets and smartphones has allowed us take much more data with us on the go. A combination of two-factor authentication and effective password management is usually enough to keep nefarious types away from your accounts, but Yubico has introduced an extra layer of safety for iOS that lets you seamlessly log into apps by hovering a YubiKey behind your phone.

YubiKey is a small USB authentication device which acts as a second line of defence. It removes the need to toggle between apps and jot down temporary codes, and reduces the potential risks associated with mobile and SMS notifications. And depending on your typing speed, YubiKey is up to four times quicker than entering a one-time password (OTP) yourself.

While Yubico's hardware based authentication supported Android devices for a number of years, iPhone support was made possible thanks to iOS 11, which rolled out last year. It enabled NFC (near-field communication) tag reading -- a feature which lets developers construct apps that utilize an OTP. To coincide with the launch, password management service LastPass has integrated YubiKey NEO support inside the most recent version of its iOS app.

A large majority of hacking breaches are due to weak passwords, but OTP solutions like YubiKey make your apps significantly harder to crack into. LastPass isn't the only service taking advantage of YubiKey's added physical security. Internet giants like Google are fond of it as well, and Facebook and Mozilla have recently opened their platforms to support the hardware security solution.

Via: LastPass
Source: Yubico
In this article: apple, gadgetry, gadgets, gear, ios, mobile, yubico, yubikey
All products recommended by Engadget are selected by our editorial team, independent of our parent company. Some of our stories include affiliate links. If you buy something through one of these links, we may earn an affiliate commission.